Ben Fogle has urged fans to ‘not waste a single second of your precious time on earth’ after he announced a second star of his New Lives in the Wild programme has died.

The presenter took to Instagram this morning to reveal that Scotsman Chris Clark, who lived in Xixuau, in the Amazon basin, one of South America’s most remote areas, had died after a short battle with cancer.

In June, the presenter revealed his heartbreak after Estonian conservationist Kristin Srauss, who was on the show with her husband Julian, a former war correspondent, had died at just 43, also from cancer.

Ben Fogle posted this snap of Chris Clark, who’d appeared on his show New Lives in the Wild, and urged people to ‘not waste a single second of your precious time on earth’ following news of the conservationist’s death at 59 (Chris Clark, pictured far right, with his family and Ben Fogle, far left) 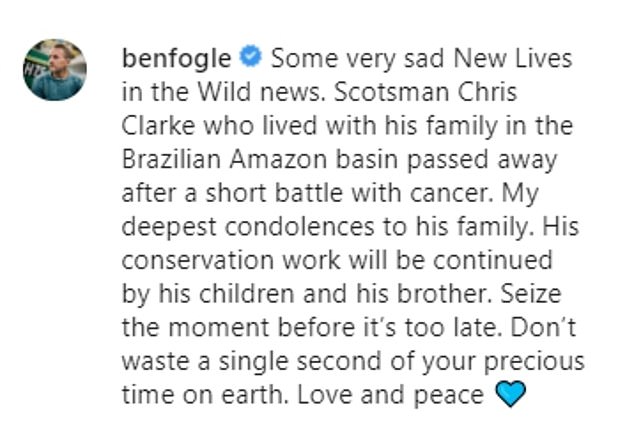 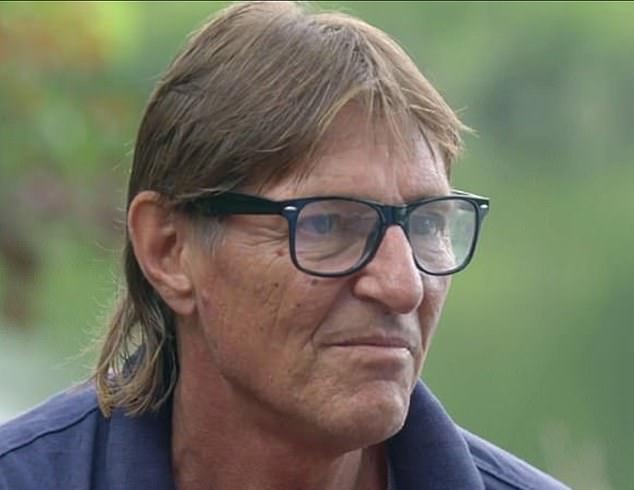 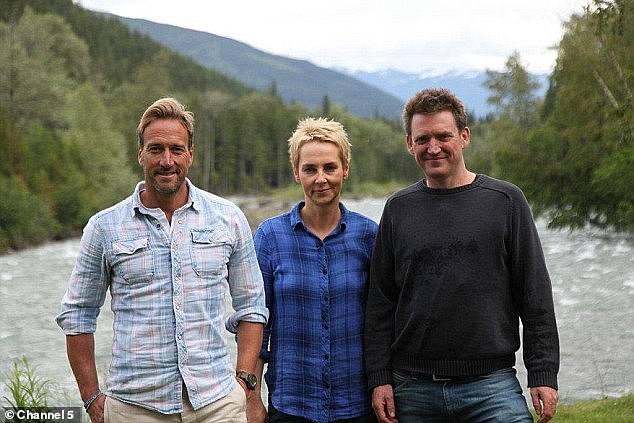 Revisiting the couple three years after the initial show, Ben had found Kristin and Julius happy and looking to the future

Clark, believed to be 59, had appeared in the final episode of the series screened in January 2019, telling viewers how a near-death experience in the Amazon had transformed his life and he ended up moving to the ‘utopian’ rainforest for good.

Speaking about the conservationist, who he’d trekked two days to meet for the episode, Fogle wrote: ‘Some very sad New Lives in the Wild news. Scotsman Chris Clarke who lived with his family in the Brazilian Amazon basin passed away after a short battle with cancer.’

He concluded his post with the words: ‘Seize the moment before it’s too late. Don’t waste a single second of your precious time on earth.’

The show followed how Chris, after spending most of his youth in Italy, spent two years travelling the world at 23 with Brazil being one of his destinations.

But a hike in the forest took a nasty turn when he and a friend became lost for a total of three days and three nights. Chris and his friend had an encounter with a jaguar and decided to build a raft in order to float upstream before they were rescued.’

The encounter left him smitten with that region and in 2004 Chris sold his company and moved permanently to Xixuau with his Italian wife and two daughters. Fast forward to 2019 and Chris’ life looked a little different having remarried a local woman Artemisia.

The couple lived in a wooden house on stilts, which Chris built himself, with their daughter Shania and Chris’ step son Ray. The family relied on a small generator for their electricity, and with the nearest shop a 24 hour boat ride away, normally fish and hunt for their food with delicacies including wild pig and piranhas.

The news of Chris’ death is the second tragedy for the show in recent months.

In June, Fogle told how Kristin Strauss had lost a battle against cancer. She had appeared on New Lives in the Wild after moving to a remote part of Canada to help her husband overcome PTSD following his career as a war reporter.

Julius Strauss, from London, settled in British Columbia in 2005 with Kristin Srauss, where they set up The Wild Bear Lodge, a bear watching business.

The former journalist, who reported for a national broadsheet on the world major conflicts of the 1990s and early 2000s, from the war in Afghanistan to the civil war of Kosovo, had credited the lodge with helping him recover from PTSD.

In 2016, the couple had welcomed TV adventurer Ben to their home, and told him about their fight to stop bear hunting in the Canadian wilderness.

But after the episode ran in June, Ben announced that Kristin had sadly passed away aged 43 in February, after being diagnosed with an aggressive form of cancer.

Heartbroken fans found that Julius was now moving on from his bear watching venture in the Selkirk Mountains of British Columbia and selling his business after Kristin’s passing. 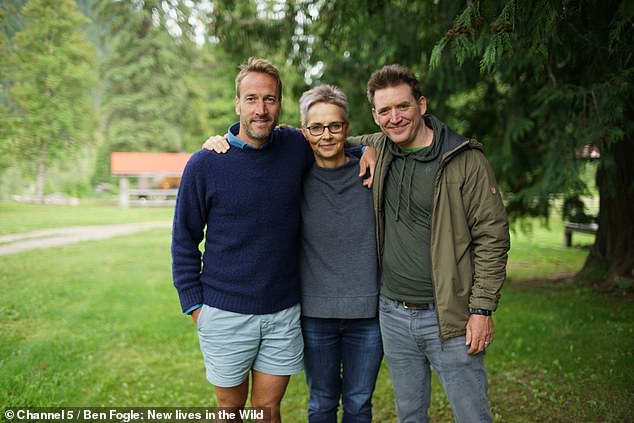 Fans of Ben Fogle: New Lives in the Wild were saddened to hear that former war correspondent Julius Strauss, from London, was selling his bear watching business in British Columbia after the death of his partner Kristin, who passed away from cancer in February 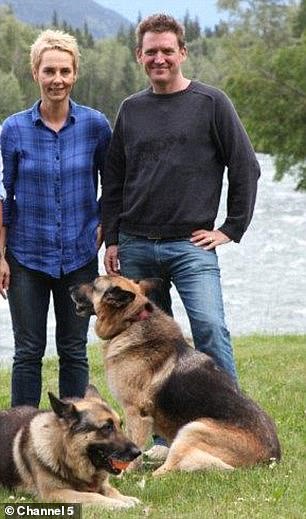 Kristin and Julius had successfully campaigned for a grizzly bear ban in British Columbia, which was put in place in 2017, and were looking to the future

The news was a sad blow after the episode found the couple happy and thriving, looking forward to expanding their business, following their campaign to protect the wildlife in their region.

A tearful Ben made the announcement at the end of last night’s show, praising Kristin’s legacy.

‘Over the years, the wild folk around the world that have let me into their lives have become an integral part of mine. Friends for ever,’ the presenter said.

‘Six months after visiting Julius and Kristin, the unthinkable hap 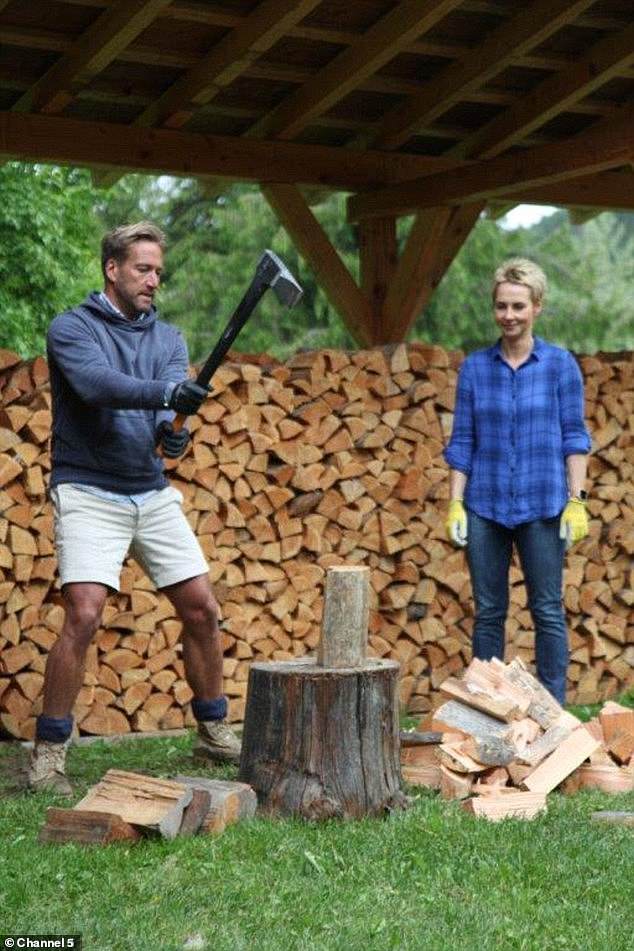 During his first visit, Ben had helped Julius and Kristin with the maintenance of the lodge, and learned about their fight to protect wildlife in the region 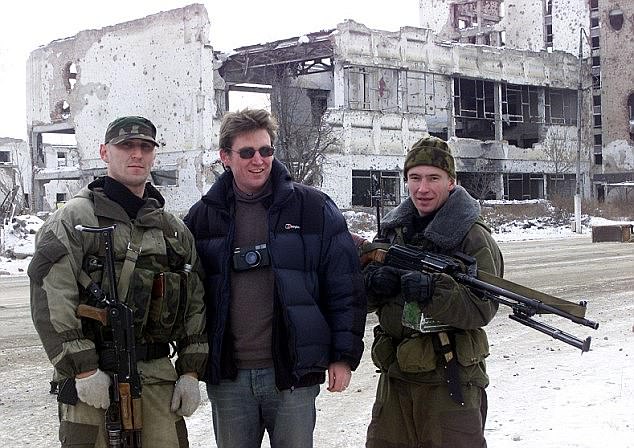 ulius, pictured during his days as a war correspondent with Russian soldiers in Chechnya, suffered from PTSD due to the harrowing scenes he witnessed

‘After the tragic loss of Kristin in February, Julius is now looking to move on,’ the Wild Bear Lodge’s website now reads.

‘Wild Bear Lodge will be available for a private sale. If you are interested in creating your own wilderness dream, please send us a note.

‘Julius expects to continue running the lodge until new owners are up and running, and will be available for an extensive handover,’ it added.

The news of Kristin’s death came as a shock to viewers, who had been touched by the couple’s incredible story.

‘Feeling so inspired, yet completely heartbroken, sounds clichéd, but things like this really puts life in perspective,’ one wrote.

‘So sorry to hear about Julius in your programme tonight. A truly inspiring couple and she deserved to live a full life, so sad,’ one said.

‘Yes I cried as well. Wasn’t expecting it,’ said another.

‘It was just heartbreaking. Completely floored my wife and I,’ one wrote.

‘I thought I was OK then one day in Sierra Leone in 2000, I got hit by a horrible dread and sense I was going to die and my balance went. I know now it was what we would call PTSD.’

Julius said he carried on working despite his deteriorating mental health but then one particularly harrowing story he covered caused him to snap.

‘I went to Iraq and Afghanistan trying to manage the PTSD, then in 2004 I covered a horrible incident in Southern Russia where more than 100 children were killed.

‘I was there and I thought this has to be a changing point in my life, I can’t do this anymore,’ he said.

By this time, he had met and fallen in love with Estonian Kristin, who had been married to a diplomat and was the bureau chief for Reuters News Agency.

The pair decided to give up their high-flying careers to travel across Canada in a camper van.

After coming to British Columbia in 2005 and setting the bear lodge, the couple had quickly discovered the devastating impact of bear hunting on the grizzly bear population in the region.

The couple had to work hard to establish their own business so they could afford to pay the mortgage on their dream home and do up the property where they would live.

Julius trained to be a bear guide and Kristin became a chef so they could offer a unique wilderness experience to tourists who stayed on their ranch.