Ben Sasse, a Republican senator, sent a letter to Attorney General Bill Barr on Tuesday demanding Jeffrey Epstein’s plea deal be thrown out so investigations against potential co-conspirators can be pursued.

‘In order to bring Epstein’s co-conspirators to justice, the Department of Justice should rip up the non-prosecution, non-investigation agreement entered into by Epstein and the U.S. Attorney’s Office for the Southern District of Florida in 2008,’ Sasse said in the letter.

If the plea deal were invalidated, the Justice Department would then be able to go after four known co-conspirators and any other people who could have been involved in the Epstein sex trafficking ring.

The plea deal, made more than a decade ago, helped Epstein side-step sex trafficking charges, protected his co-conspirators and allowed him to only serve 13 months of an 18-month sentence in county jail in Florida. 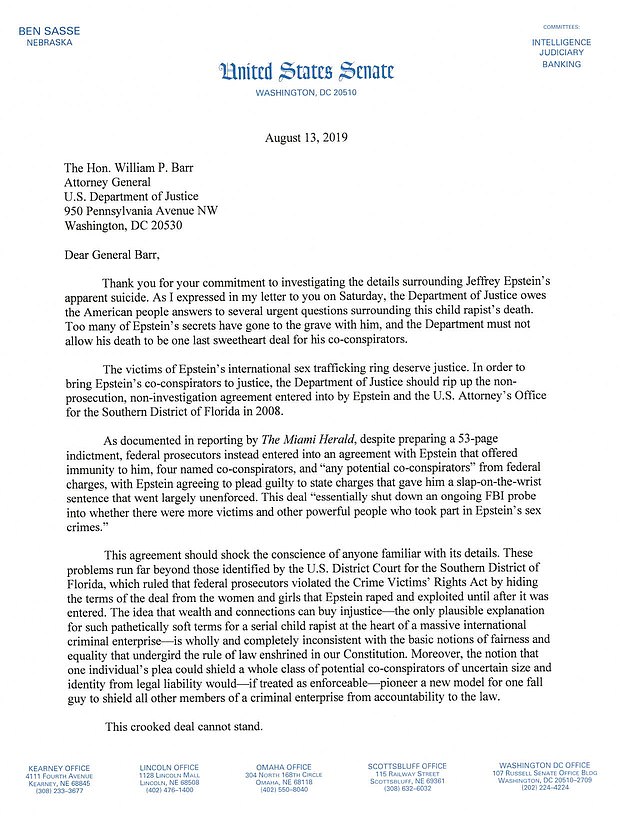 ‘In order to bring Epstein’s co-conspirators to justice, the Department of Justice should rip up the non-prosecution, non-investigation agreement entered into by Epstein and the U.S. Attorney’s Office for the Southern District of Florida in 2008,’ Sasse wrote in the letter 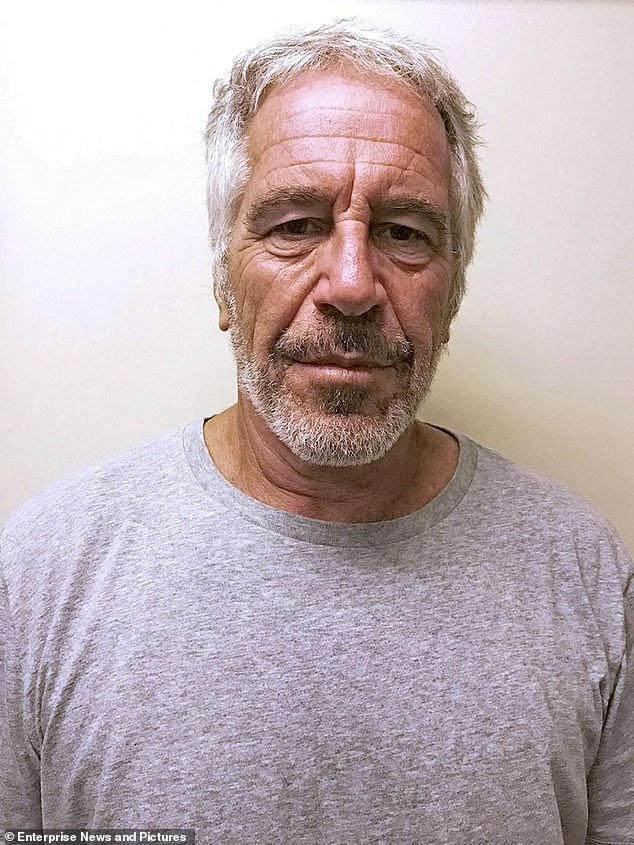 The 2007 plea deal helped Epstein side-step sex trafficking charges, protected his co-conspirators and allowed him to only serve 13 months of an 18-month sentence in county jail in Florida

In his letter, Sasse quoted a report that said the deal ‘essentially shut down an FBI probe into whether there were more victims and other powerful people who took part in Epstein’s sex crimes.’

Documents unsealed in Manhattan federal court last week revealed how Epstein arranged for young girls to perform nude ‘massages’ and other sex acts. His private jet, the Lolita Express, was reportedly set up with a bed where guests had group sex with young girls.

Epstein, 66, was found dead over the weekend, hanging in his prison cell from an apparent suicide.

There are questionable circumstances surrounding Epstein’s death since he was supposed to be on 24/7 suicide watch, and new reports and surveillance footages revealed Wednesday show the two guards who were supposed to be checking on him fell asleep and falsified records.

Donald Trump helped perpetuate a conspiracy theory that Bill and Hillary Clinton had something to do with the deaths by reposting a tweet of court documents where a woman claimed Bill visited the island.

Bill Clinton and Epstein were friends, and after reviews of the Lolita Express flight log it appears Clinton had been on board at least 26 times. His office released a statement that said he had only been on the plane four times and have never visited the Caribbean island Little St. James.

Virginia Roberts, who says she was recruited to be a sex slave for Epstein when she was 15, claimed in 2011 that Clinton had dined on the so-called ‘pedophile island.’

She told the Mail on Sunday that Clinton was among the powerful men she had come into contact with while she ‘worked’ for Epstein, claiming she had met him twice, once on Little St. James.

She said that Epstein invited two young brunettes to a dinner which he gave on his Caribbean island for Clinton shortly after he left office, but as far as she knew, there was no sexual contact between them and the former president.

Roberts was questioned under oath about the Mail on Sunday interview and did not dispute that part of it.

She also said under oath that Ghislaine Maxwell, Epstein’s fixer and alleged procurer, had told her that Clinton had arrived by Epstein’s helicopter.

Epstein’s island was raided on Monday, but details of the operation have not yet been released. 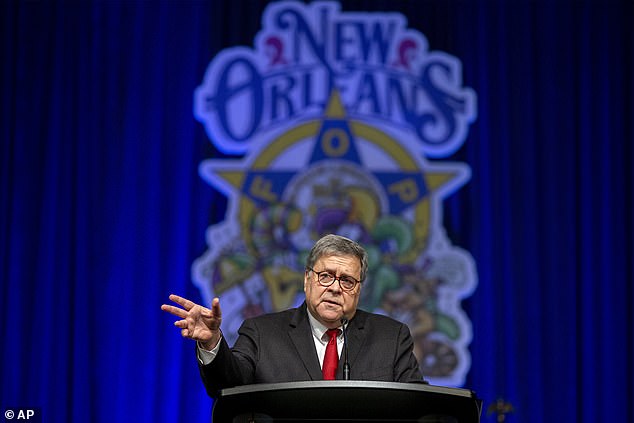 Epstein was found dead by apparent suicide in his prison cell over the weekend, and Barr said his co-conspirators would still be brought to justice. ‘Let me assure you that case will continue on against anyone who was complicit with Epstein. Any co-conspirators should not rest easy,’ he said

When speaking to a law enforcement group in New Orleans, Louisiana on Monday, Barr said any cohorts of Epstein’s ‘should not rest easy,’ as the case would continue moving forward despite his death.

‘Let me assure you that case will continue on against anyone who was complicit with Epstein,’ Barr said in his remarks. ‘Any co-conspirators should not rest easy. Victims deserve justice and will get it.’

After news of Epstein’s death broke, Sasse sent a separate letter to Barr saying those who were responsible for allowing the situation to fall through the cracks leading to Epstein’s death need to be held accountable.

‘The Department of Justice failed, and today Jeffrey Epstein’s co-conspirators think they might have just gotten one last sweetheart deal,’ he wrote. Obviously, heads must roll.’

Even before the most recent arrest, Sasse has been pushing for the DOJ to pursue Esptein’s case.

During Barr’s confirmation hearings in January, the Nebraska senator called on him to open a ‘full and thorough’ investigation into the plea deal that allowed him to avoid federal prosecution.