Ben Stokes spoke of England’s disappointment after they were bowled out for 205 on the first day of the crucial fourth Test in Ahmedabad.

Needing victory to secure a creditable 2-2 draw, Joe Root’s team collapsed once more to India’s spinners – though this time there could be no complaints about the surface. The hosts closed on 24 for one, after James Anderson trapped Shubman Gill for a duck.

‘I think we’ll look back on that and be disappointed by some of the batting,’ said Stokes, who top-scored with 55 in an innings in which Dan Lawrence also made 46. ‘We’re more than capable of scoring over 300 on a wicket like that. It’s frustrating, but we can’t dwell on it too much.’

England had spoken in advance about not repeating the mistakes they made during last week’s two-day Test match, also at Ahmedabad, where left-arm spinner Axar Patel kept dismissing with straight deliveries.

Yet Dom Sibley, Dom Bess and Stokes himself all fell to balls that went on with the arm, leaving England’s vice-captain to chastise himself about an opportunity missed.

‘I was very disappointed to get in on that wicket, to start feeling comfortable and then get out in the way I did,’ said Stokes, after falling lbw to off-spinner Washington Sundar.

Stokes, who was struggling with a stomach bug, has now made two of England’s five scores of 50-plus in their seven innings in this series – a feeble tally for which he had a frank explanation.

‘I’ve played 70-odd games, and I’ve told others in the team that this is the hardest conditions I’ve faced as a batsman, and I’ve played all around the world,’ he said. 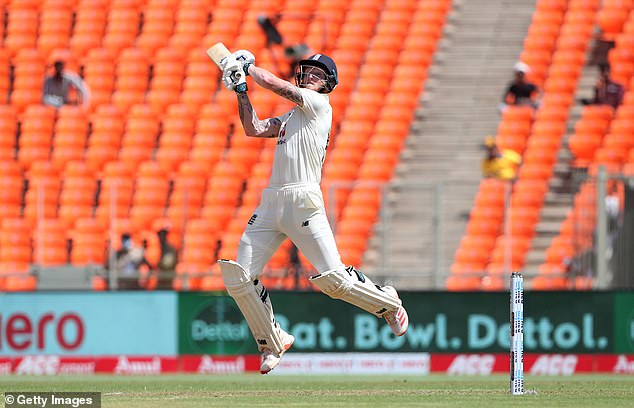 ‘It’s a case of finding it your own way. It’s not about coming together as a group and saying: “This is what we need to do next.” It’s about how can we go away as individuals, and when we come back here next time, have we progressed as an individual and a group of batsmen?’

He also played down a spat with seamer Mohammed Siraj, which prompted the involvement of Indian captain Virat Kohli and the intervention of the umpires: ‘There was completely nothing untoward. Just two blokes who care about what they do, and two guys who definitely don’t back down.’

Siraj, who is playing only his fifth Test but became something of a cult hero during India’s famous series win in Australia recently, was less placatory.

‘Stokes said a few things to me,’ he said. ‘He was swearing. But that happens on the ground. I told Kohli this was happening, and he took care of the issue.’