Ben Yedder shares prediction he would knock Manchester United out

Sevilla forward Wissam Ben Yedder has shared a post on Twitter that seemingly predicted he would knock Manchester United out of the Champions League.

The La Liga side claimed a surprise 2-1 aggregate win at the expense of Jose Mourinho’s Red Devils on Tuesday evening, with Ben Yedder scoring both goals after coming off the bench.

However, on his return to the Old Trafford dressing rooms, the Frenchman replied to a post on Twitter that claimed he would be the man to eliminate United 24 hours before the game started.

On Monday, Twitter user @Aubzology posted: ‘This man is going to single-handedly knock United out of the CL tomorrow. Remember this tweet,’ alongside a picture of Ben Yedder.

And he proved to do just that as he rose from the bench to fire a smart strike past David de Gea before heading home from a corner to make it 2-0 just moments later.

Romelu Lukaku pulled one back for United but it proved to be nothing more than a consolation as Ben Yedder replied to the premonition with: ‘He knew even before me lol’. 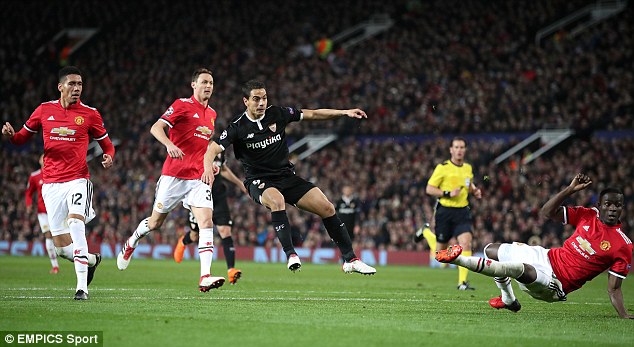 Ben Yedder replied: ‘He knew even before me lol’ after returning to the dressing room

Ben Yedder has previous of sharing similar jibes at English teams after Sevilla staged a stunning comeback to draw 3-3 with Liverpool in the group stages of this season’s tournament.

Liverpool pulled off one the most famous turnarounds in Champions League history in 2005 when they came from 3-0 down to beat AC Milan on penalties in the final.

Ben Yedder shared a post of the scoreline graphic after drawing with Jurgen Klopp’s Reds saying: ‘Hope @acmilan watched it’.