Bendigo: The Australian town that settlers claim is crying out for more refugee migrants

‘People are thriving here’: The Australian town that new settlers claim is crying out for more refugee migrants as efforts mount to reduce pressure on big cities

New settlers in a regional Australian town say they are thriving in the area as governments step up efforts to spread the country’s migrant intake more evenly.

Bendigo, in central Victoria, has long been known for its rich Colonial heritage dating back to the goldrush era, but is being transformed through a high intake of refugees.

Since 2007, the area has welcomed a steadily increasing number of Karen refugees from war-torn Myanmar – who now call the quintessentially Australian town home.

Say Ka Trace Hlaing (pictured) has found a new home in Bendigo, Victoria, and is helping contribute to its economy and culture

For Say Ka Trace Hlaing her arrival to Bendigo came nine years ago after spending more than a decade in a refugee camp awaiting resettlement.

In the years since, she and other Karen refugees have given back to their new home by working in the region’s dental health service.

The positive reception has been echoed by many townspeople, with Kaye Graves from Bendigo Community Health Services telling SBS that immigration has benefited the economy.

‘All of our people of refugee backgrounds are working where there are job shortages. They’re also contributing and building our capacity in other job areas,’ she said. 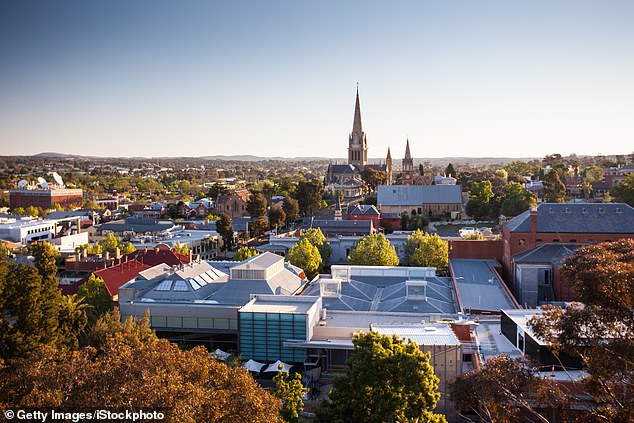 Bendigo, in central Victoria, has long been known for its rich Colonial heritage, but through an increasing refugee intake is now pointed firmly toward the future

In the past decade Bendigo – which has a population of 95,000 – has seen its number of Karen residents climb steadily to more than 1,000.

Similarly, the town of Nhill in western Victoria has  also taken in many Karen refugees.

The integration of refugees and migrants into regional areas was the exception rather than the rule of Australia’s immigration pattern.

The state and federal governments have been stepping up efforts recently to spread the migrant intake more evenly across the country.

The efforts were designed to alleviate pressure on Sydney and Melbourne, where the migrant-fueled population booms have created problems with infrastructure and government services.