Thousands more British households will be in danger of losing their homes next year if they lose their job or become too ill to work, the UK’s banking trade body has warned.

That is thanks to a double of whammy of the switch to universal credit and the scrapping of a safety net for mortgage interest payments from next April, UK Finance said.

The report argues that support for mortgage interest – paid by the government to homeowners struggling to keep up with their mortgage payments due to lost income – is a critical for struggling homeowners, especially the elderly.

By scrapping it at the same time as axing tax credits, the banking trade association says it’s ‘inevitable’ that more of the families who fall behind on their mortgages will be evicted.

Support for mortgage interest is scheduled to be axed next April, after which an estimated 135,000 low-income homeowners who currently claim the free benefit will be forced to take a loan from the government instead – and pay interest on it.

Analysis done by insurer Royal London suggests that a Pension Credit recipient receiving the average weekly SMI payment of £20 could run up a debt of £5,552 if they claim SMI for five years – the typical claim duration for pensioners.

What is support for mortgage interest?

SMI is a benefit paid by government to low income homeowners.

Estimates suggest that around 65,000 of those who will be most affected when the benefit is axed are older, vulnerable borrowers who took out interest-only mortgages before the financial crisis hit in 2008 and now claim Pension Credit.

Working-age borrowers are also affected as SMI is paid to homeowners in receipt of certain income-related benefits, such as Jobseeker’s Allowance.

It is normally paid directly to your lender. You can’t get help towards the amount you borrowed – only the interest.

After 5 April 2018, SMI will stop being a benefit and will become a loan you will have to repay with interest when you sell your home.

While the interest on the new SMI loan won’t be payable until the borrower is back on their feet financially or the property is sold, there are already warning signs that the imminent loss of the benefit is spooking mortgage lenders.

Earlier this year This is Money was contacted by a 68-year old lady after her mortgage lender wrote to her threatening to evict her, citing as part of the issue the withdrawal of SMI.

According to the UK Finance report, Challenges for our Home Ownership Safety Net, without SMI there is little incentive for lenders not to evict struggling borrowers.

The report says: ‘The system will be reliant upon individuals and their actions as well as on lender forbearance within the legal and regulatory safeguards that have been built into the operation of the mortgage market.

‘For the most part, however, owner occupiers who are unable to negotiate a means of catching up with their payments are expected to sell and what government assistance they continue to receive is within the rental market.’ 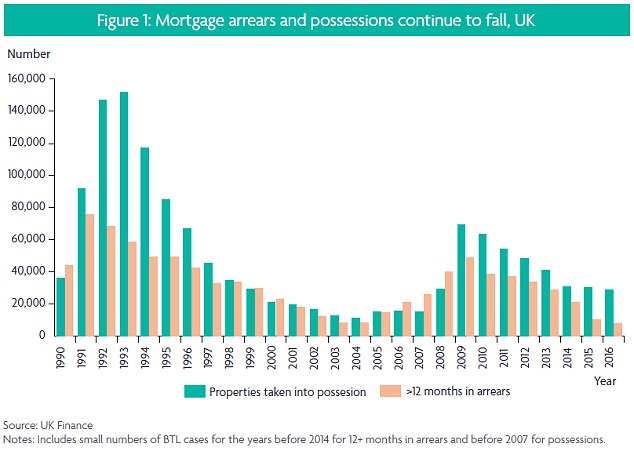 The report’s authors – Peter Williams, a fellow at Cambridge University’s department of land economy, Steve Wilcox, a professor at York University’s centre for housing policy, and Christine Whitehead, professor of housing economics at the London School of Economics – also raised questions about the wisdom of the government’s timing.

SMI is due to be scrapped at the same time as the controversial universal credit regime is rolled out across the UK, replacing the existing system of tax credits and potentially leaving many households worse-off.

The Bank of England base rate, meanwhile, has been at or below 0.5 per cent since March 2009 keeping the cost of mortgage payments down.

However, mortgage rates are starting to rise following last month’s hike in the base rate from 0.25 per cent to 0.5 per cent.

UNIVERSAL CREDIT: HOW WILL IT AFFECT HOMEOWNERS?

Take a couple with two children, with one person in full time work at the level of the minimum wage.

Under the tax credit regime the couple would be able to cover the costs of a £123,000 mortgage, and still have a residual income just above Income Support scale rate levels.

Under the UC regime they would only be able to cover the costs of a £79,000 mortgage to be left with the same level of disposable income.

The extent of mortgage cover would, however, reduce in both cases in the event of any rise in interest rates.

The differences between the tax credit and the UC regimes are even greater for lone parent households.

With the economic uncertainty that surrounds Brexit, any downturn could see a rise in redundancies and more households struggling to meet their mortgage payments.

‘The protection offered by much reduced interest rates since 2008 may now be under threat, and the more rigorous rules for entry to the [mortgage] sector cannot remove inherent risks to mortgage borrowers resulting from unforeseen changes in individual circumstances,’ says the report.

‘It is now evident that by 2022 there will only be limited government financial support for home buyers in distress, and that will mainly be in the form of loans for those not in work.

‘The work allowances for home buyers under the universal credit scheme will provide much more limited support to home buyers in part-time and low paid work than is available under the current tax credit and welfare schemes.

‘Given where the UK is in the interest rate cycle and considering the tensions that exist within the housing market around affordability and the uncertainties surrounding Brexit, the question then is whether this is enough?’

However, it costs the government hundreds of millions of pounds each year.

‘Despite all its limitations, SMI is still by the far the most significant government intervention providing direct support to homeowners in financial difficulties with their mortgage,’ notes the report.

‘Ultimately, although the safeguards that exist for borrowers via court procedures and the potential for renegotiation with their lender remain in place, there is little from the government side that might incentivise lenders to do more than follow due process.

‘The limitations of support available to mortgage holders through the new loans for mortgage interest and in universal credit are such that inevitably these will result in a higher level of possessions than would otherwise be the case.

‘The households affected will find themselves in the social or private rented sectors and the government will incur costs in the form of housing benefit.

‘These potential costs to government should be a factor when considering the construction of a more effective home owner safety net.’

WHY DID WE NEED SMI?

It was the sharp rise in the number of households behind on their mortgage payments or facing having their home repossessed in 1990 that prompted the government to intervene in 1991.

It began to put in place a more multi-faceted safety net to protect home owners from the market downturn and ultimately from losing their homes.

This included encouraging mortgage lenders to ease up on borrowers who had fallen behind on their payments by giving them more time to recover, encouraging borrowers to take out mortgage payment protection insurance which would kick in if they lost their job and government provided support for mortgage interest.

When the PPI scandal hit in 2007, MPPI was tarred with the same brush and providers pulled most of their policies from the market.

As a result, when the credit crisis hit later that year and hundreds of thousands of homeowners began to lose their jobs, the government upped the number of people who could claim SMI and made it more quickly available.

The benefit has since been scaled back and in April 2018 will be scrapped and replaced by a loan to struggling borrowers, who will have to repay it plus interest when they sell their home.

The government is instead putting pressure on lenders to show forbearance – ie. soak up the losses they make when their mortgage customers fail to pay their loan back instead of taking possession of the property, forcing a fire sale and recovering their money that way.

This has worked in the past and most consider this, along with low interest rates, has been the reason that arrears and possession figures are so low.