Berlin gives the middle finger to rule-breakers: Poster campaign shows masked woman swearing at those who refuse to cover their faces

Berlin has taken a novel approach in its quest to encourage mask-wearing with a poster showing an elderly woman giving rule-breakers the middle finger.

The advert, entitled ‘We Stick to the Corona Rules’, was launched on Tuesday with an image of the woman swearing while wearing a floral-patterned face covering.

In case the message was not clear enough, it came with a caption promising ‘the raised finger for everyone without a mask’.

However, the campaign was scrapped today after critics said it was divisive and unfair to people who have valid reasons not to wear masks.

An elderly woman swears at rule-breakers in a Berlin advertising campaign which was scrapped after a backlash. This cropped poster says ‘For everyone without masks’ at the top, and ‘we stick to the corona rules’ underneath

Christian Taenzler, a spokesman for the Visit Berlin board which created the campaign, said it was a ‘provocative’ image and had received some positive feedback.

He said that while the middle-finger image would be dropped, a campaign based on the city’s famously dry humour would continue.

Marcel Luthe, a member of the Berlin state assembly, said he had made a formal complaint to the police about the advert.

Luthe argued that the advert incited hatred against all those who cannot wear a mask, such as young children and those with hearing or other health issues.

Thousands of people have joined several protests held in Berlin in recent months to demonstrate against lockdown measures and mask-wearing rules.

Berlin is one of the 11 cities which agreed new restrictions with Angela Merkel last week, which kick in when a city reaches 50 cases per 100,000 people in a week.

The rate in Berlin is currently 71 per 100,000, meaning the new measures have already come into effect.

These include a late-night curfew on bars and restaurants after city mayor Michael Mueller said large groups of people were contributing to a spike in infections. 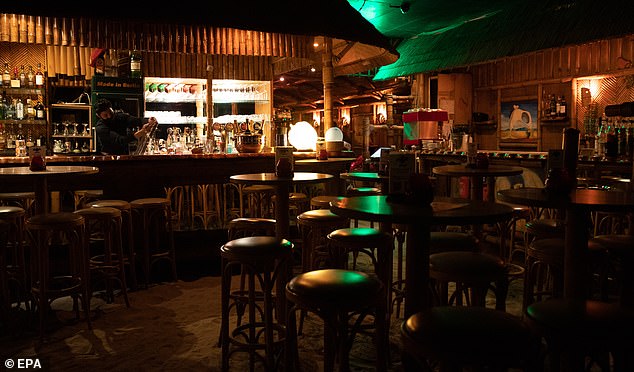 ‘The advice showed we have to act quickly,’ Mueller told reporters, adding action was needed to avoid a full lockdown of the German capital’s famous nightlife.

Until the end of October, restaurants and bars will have to close at 11pm and petrol stations will be banned from selling alcohol during those hours.

In addition, a maximum of 10 people will be allowed at private parties indoors, down from 25.

Germany as a whole announced more than 5,000 new cases in 24 hours today, a level last seen in April, although the true figure was likely higher then.

Berlin was responsible for 706 of the new cases and three deaths, bringing the total death toll in the German capital to 237.

Merkel has repeatedly voiced alarm about contagion growing again, and urged the country not to squander its early success in keeping numbers manageable.

She has said that keeping schools and the economy open are her priorities, and called for people to open their windows as a cheap way of preventing virus spread.