Berlin’s administrative court has ordered the city’s left-wing officials to remove cycle lanes that have been installed throughout the city during the pandemic.

The court ruled that Covid-19 was unfairly used by officials as an excuse to push through their ‘traffic agenda’.

Germany’s Alternative for Germany (AfD) party filed an urgent motion which argued that the bike lanes failed to conform to German traffic law.

In its ruling, the court said that the city had failed to provide sufficient evidence that the streets on which the cycle lanes had been installed were dangerous to cyclists.

The court also ruled that the coronavirus pandemic was ‘not a traffic relevant consideration’, criticising the left-wing government for using the pandemic as justification for the lanes.

Similar measures have been taken to install cycle lanes in London and other parts of the UK during the pandemic to reduce overcrowding on public transport, but critics have said this has been to the detriment of drivers, causing traffic jams.

A cyclist uses a pop-up road during their morning commute near Alexander Platz in Berlin, Germany. Berlin’s administrative court has ordered the removal of some of Berlin’s pop-up cycle lanes 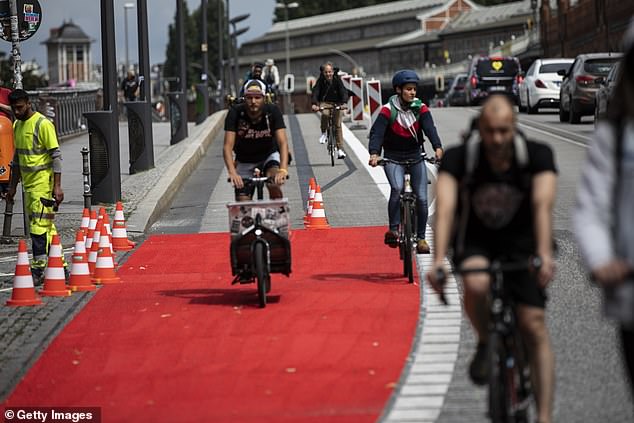 Opponents to the Berlin cycle lanes argued that the ruling coalition of centre-left Social Democrats (SPD), Greens and Linke were using the pandemic to push through a traffic agenda.

They said that the government had been advocating for the measures before the coronavirus came to Germany.

‘This is a victory for individual mobility against car hatred. We’re delighted that the court put this left-wing ideology in its place,’ AfD politician Frank Scholtysek said in response to the court ruling.

The city’s government has appealed against the decision, according to thelocal.de.

It is currently unclear whether the court will allow the cycle lanes to remain in place during the appeal process, which will involve the case being heard in federal court.

So far this year, 14 cyclists have died in Berlin, with many criticising the safety of Berlin’s roads. Cyclists can often be seen protesting in ‘critical mass’ for better road safety in the capital.

The ruling will come a blow to many cyclists in the car-loving nation who had hoped that the new lanes would become a permanent fixture in Berlin.

The speed with which the lanes were installed – marked with paint and bollards and providing cyclists with more space on the roads – was popular with the city’s cyclists.

But critics claimed that the lanes had caused more traffic jams in the city. ‘Cycling increased during the pandemic but car traffic did not decrease,’ Oliver Friederici of the centre-right Christian Democrats (CDU) told Tagesspiegel newspaper.

The eight lanes that will be affected by the ruling are mainly in the Kreuzberg and Charlottenberg districts of the city. 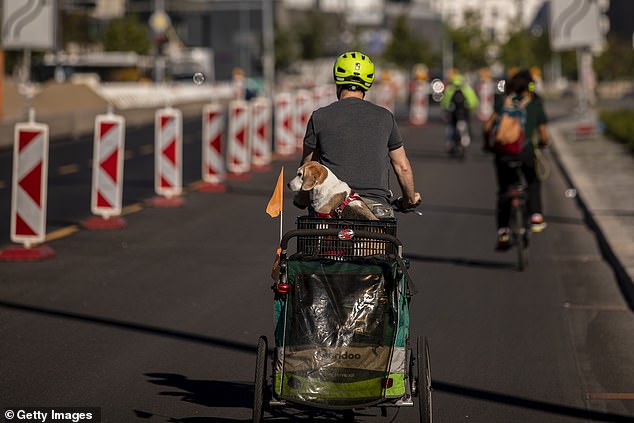 Pictured: A man cycles down a pop-up bike lane in Berlin, with a dog and child carrier attached the back of his bike. The court accused Berlin’s left wing government of using the pandemic to further its traffic agenda 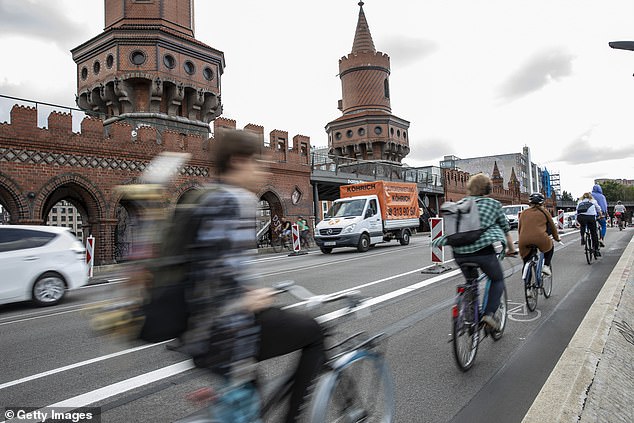 The court also ruled that the coronavirus pandemic was ‘not a traffic relevant consideration’. Pictured: Cyclists use a ‘pop up’ bike road near Oberbaum Bridge in Berlin

The dozens of lanes that sprung up in Berlin during the coronavirus pandemic are similar to those that were erected in London.

Miles of new cycle lanes were installed in London as part of plans to avoid commuters cramming on to public transport during the pandemic.

But as heavy traffic has returned to the city, many of the new pop-up cycle lanes have been pictured empty next to long traffic queues, despite the push to get more people cycling as they return to their offices. 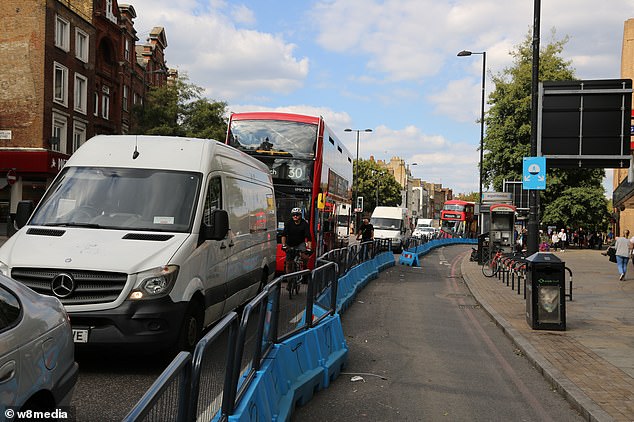 Cars, vans and buses queue along Upper Street in Islington, North London, next to an empty cycle lane that was installed during the pandemic 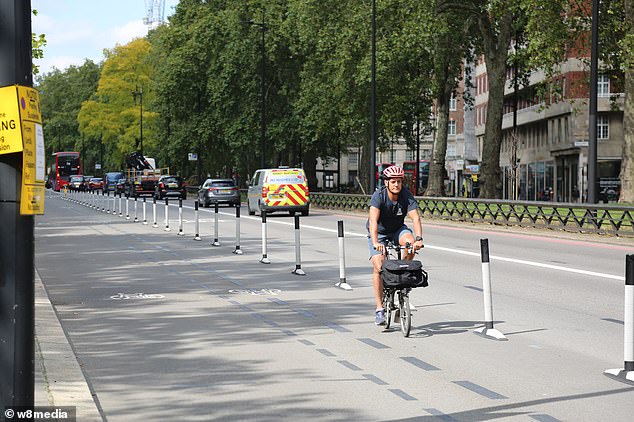 The aim of Mr Khan’s StreetSpace scheme was to increase cycling both during and after the lockdown, setting a target of a 10-fold increase in the number of people using their bikes to travel.

Speaking at the time of launching the scheme, Mr Khan said: ‘I’m determined to give Londoners more safe and sustainable alternatives to travelling by car, especially when our public transport system is under strain due to Covid-19. We’re creating essential new cycleways across our city.’

But the push to increase cycling has come under attack from Conservative MPs, who claim it is ludicrous to suggest millions of Tube journeys can be replaced by bike rides – especially for workers commuting into central London from outer zones.

Transport for London had to ask the Government for a £4.5billion bailout after its revenue plummeted by 90 per cent and it quickly burned through its £2billion reserves after the lockdown was imposed in March.

Elsewhere in the UK, residents were left furious today after signs they put up in protest at their street being turned into a cycle lane were removed by ‘jobsworth’ officials who feared they could injure cyclists. 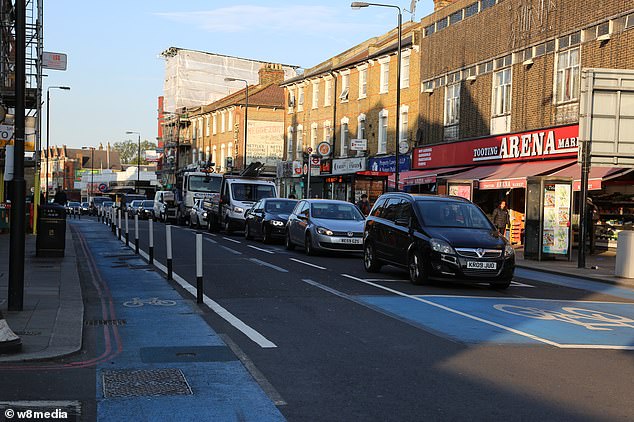 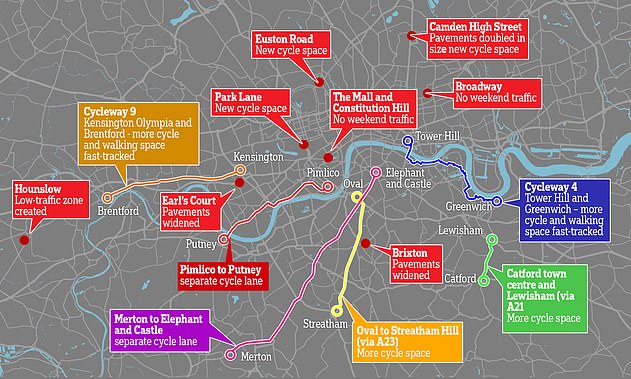 What is active travel?

The Government is spending £225 million on active travel measures across the country, most notably in London, Oxford, Manchester, Birmingham and York.

A major initiative launched by the Department for Transport in May set aside £225m for ’emergency active travel schemes for local authorities due to the pandemic’.

The department says the money will enable local authorities to produce ‘new cycling and walking facilities’ and its altered road and parking schemes will promote recovery.

However, Emergency Active Travel Fund money comes with a string attached. Councils must satisfy officials ‘they have swift and meaningful plans to reallocate road space to cyclists and pedestrians (both groups rather than one or the other), including on strategic corridors.

Bournemouth, Christchurch and Poole Council has closed the road to cars as part of the active travel scheme to encourage people to walk and cycle.

BCP Council was awarded around £1.4million from the government for the project.

Wooden boards were put up by disgruntled locals in Poole, Dorset, after their entire street was blocked off by large planters to allow pedestrians and cyclists to use it as part of the government’s wider active travel scheme.

The scheme, which has been introduced to allow for social distancing amid the coronavirus pandemic, has caused controversy as many believe it is being implemented to ‘punish’ motorists.

Furious motorists across the UK have accused the government of a ‘war on drivers’ with the scheme, which has seen roads blocked, traffic congestion increased and journey times lengthened.

The Government is spending £225 million on similar measures to those seen in London across the country, most notably in Oxford, Manchester, Birmingham, York, Edinburgh, Nottingham, Derby and Cardiff.

In the latest furore caused by the scheme, angry residents on Churchfield Road in Poole planted signs in protest against their street being closed off, placing them in timber containers.

However, they were soon taken down by ‘jobsworth’ council workers, in case a cyclist crashed into one of the planters and injured themselves on the screws in the placards.

Locals were left stunned by the explanation – especially as the planters themselves had been installed by the council.

The road closure has seen residents have to take a ‘massive detour’ to get to their own homes, causing anger at the timing of the new scheme.

The signs, which carried the slogan ‘open our road’ were put in place by resident Carolyn Hewitt at the end of Churchfield Road in Poole. 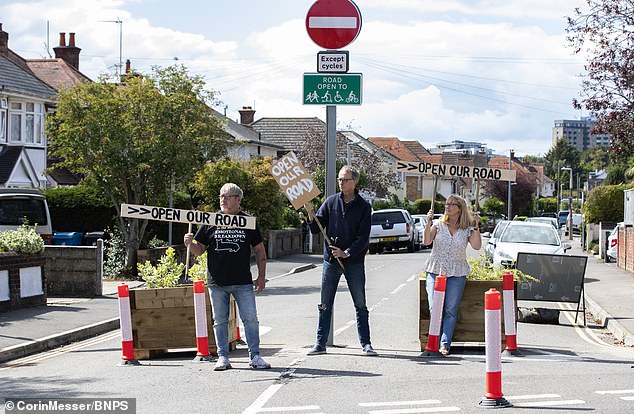 Residents signs they put up in protest at the Government’s active travel scheme in Poole, Dorset, were removed by officials who feared they could injure cyclists. Pictured: Residents protest against the road closures

Mrs Hewitt, 61, has accused the council of ‘making up excuses’.

She said: ‘It’s absolutely ridiculous. They have put the bollards in place yet it is my signs that were of mortal danger to cyclists.

‘The workmen just turned up, pulled the signs out and tossed them in the back of their truck.

‘It was only because I saw them that I was able to get them back.

‘They told me that someone could crash and hit their head on the screws which were poking through.

‘I’ll be the first to admit that my DIY is not what it should be and the screw heads were poking through but even so, it does sound like an excuse rather than a reason.

‘We’re now in a position where we are pinned in our road for the next six months and have to take a massive detour to get to our own driveways.’