Bernard Cornwell on religion, success and making America his home

If God exists, His ears will be burning. ‘Early Christianity was as bad as Isis,’ says Bernard Cornwell with a wicked grin. ‘They were dreadful. They set about deliberately destroying all the beauty of the ancient world, and ancient philosophies. It’s a history that got written out.’

The author of the blockbusting Sharpe and The Last Kingdom series of novels is just getting started. His views on modern-day Christianity are equally scathing. ‘I have very strong feelings based on my own experiences. It’s a religion based very much on fear: unless you obey these rules you’ll spend eternity being tortured by devils. I will admit that a lot of the fun I have in my writing is a smack at my childhood.’

Cornwell’s vivid tales of derring-do in the Napoleonic Wars and power struggles between the Vikings and Saxons have sold 30 million copies worldwide.

Like his wayward hero Richard Sharpe, Cornwell was born to an unmarried mother in London’s East End. In 1943, Dorothy Cornwell became pregnant during a short relationship with a Canadian air force man. Shortly after his birth in February 1944, Cornwell was adopted by the Wiggins family, who belonged to an extreme Protestant sect called the Peculiar People. ‘It was grim,’ he shudders. ‘With fundamentalist Christians, it’s all about “thou shalt not”. I remember my adoptive mother said to me at seven years old, and this is seared into my brain: “I wish we hadn’t adopted you.” I thought, actually, I agree with you. It was a curious childhood. The absolutely unyielding nature of having religion thrust upon you has a warping effect.’

He gleefully recalls the day he banished God from his life. ‘Evangelical Christians talk about that wonderful moment of conversion: let Jesus into your heart and life is all daisies and sunshine,’ he smiles. ‘Well, I can remember the moment of MY conversion. I woke up one morning and thought, there is no God, this is ridiculous. Boom! With one bound I was free. It was a feeling of great relief, to know that you’d been sold a pup. Nowadays I get lovely letters from Anglican clergymen, and I’m married to an Episcopalian whom I love dearly, but for me? Nah!’

He shakes himself. ‘Come on, I’m 74 now! I shouldn’t be moaning about when I was eight.’

Lounging in the library of a London hotel, Cornwell is fascinating company. He flew in to Britain last night from America, where he has lived for almost 40 years with his second wife, Judy, splitting their time between a 17th-century village in Cape Cod and Charleston, South Carolina. Yet there remains something quintessentially British about him. He swears liberally, has a vaguely theatrical air and would no doubt be highly entertaining company holding court in the lounge bar of a country pub.

At seven my mother said, ‘I wish we hadn’t adopted you’

Cornwell first made his mark as Bernard Wiggins, working as a producer for the BBC in Northern Ireland. Life changed when he met visiting American Judy in an Edinburgh hotel in 1979 and fell ‘madly in love’. She was divorced with three young children; he had a daughter from his first marriage. ‘I suppose it was all quite traumatic,’ he nods. ‘I didn’t want to leave Britain and live in America, although I’m glad I did – we’re still married after 40 years. I couldn’t get a job over there, they wouldn’t give me a green card. When I first started writing Sharpe, it was in desperation.’

Inspired by C S Forester’s Hornblower yarns, Cornwell reverted to his birth name and created a no-nonsense hero who rose through the ranks of the British Army, putting plenty of noses out of joint along the way. ‘I finished the first book, Sharpe’s Eagle, and an agent I knew told me no one was interested in books about the British Army. Then I sent it to a publisher I’d met through television. He made me an offer of £3,000, which I knew was utterly insufficient to keep me for a year. I didn’t know what to do. We scraped by.’

His fortunes changed on Thanksgiving Day, 1979. At a party in New York, Cornwell met an English agent whom he begged to read his novel. Having reluctantly agreed, the agent called back within 24 hours, asking: ‘How much do you want?’ Within a month the broke British exile had signed a seven-book contract and has never looked back. The recently published War Of The Wolf, already a bestseller, is his 56th novel. He chuckles. ‘I sometimes look at the shelves and think, Where the hell did they come from? I’m completely unregimented. I can’t plan. I have literally got to the end and not known how a book’s going to finish. It’s an incredibly stupid way of working.’

He is equally direct regarding the appeal of his books. ‘My job is not to educate, it’s to entertain.’

Exposure on television has certainly helped. Sharpe, with Sean Bean in the title role, ran on ITV between 1993 and 1997, returning for specials in 2006 and 2008. The books were bestsellers before Bean came long, but ‘of course TV helps’, says Cornwell. ‘I’m not an idiot, and I’m deeply grateful.’ The Last Kingdom, meanwhile, has transitioned from the BBC to Netflix for its third series. 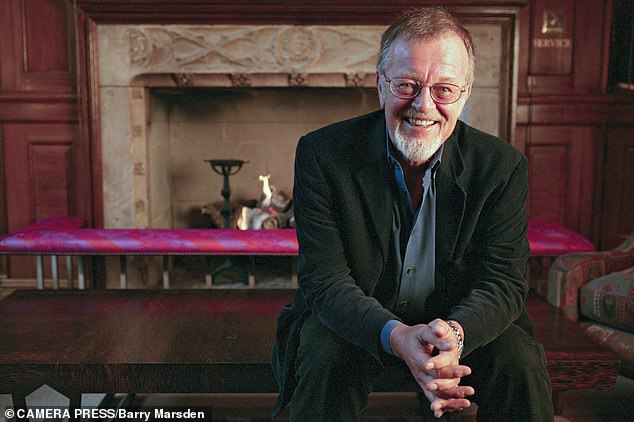 Fifteen years ago, Cornwell finally reunited with his biological parents. ‘I was doing a lecture in Toronto when a girl came up to me and said, “I know who your father is and, by the way, I’m your cousin.” I met my father many times, and it was fine. I looked just like him and I laughed just like him.’ In a final twist worthy of his books, when he subsequently met his mother he discovered she was a huge fan of his work. ‘Historical novels were her passion. That gene came through without touching the sides! She was in a book shop one day and saw Bernard Cornwell on the shelf. She took it down, looked at the author’s photograph. She told me, “I was looking at your father.” I said, “Well, why didn’t you write?” She said she wasn’t sure if I’d welcome it.’ He puffs his cheeks and sighs. ‘Hell, these things happened 75 years ago. Time to forgive. I was pleased I met them. I liked them both enormously.’

By the time they met, Cornwell was in his late 50s and had finally found a place to call home. ‘I know all the prejudices Brits have about America, and they’re almost all wrong – except if you hate Trump, in which case I’m with you 100 per cent. I genuinely love it. It’s weird. To this day when I fly into Boston, I think I’m home.’ He laughs. ‘How did that happen?’ The Lord does indeed move in mysterious ways.

‘War Of The Wolf’ (HarperCollins £20) is out now. ‘The Last Kingdom’ is on Netflix