Bernie calls Trump the most ‘racist, homophobic, sexist and bigoted president in history’

Bernie Sanders branded Donald Trump the most ‘racist, homophobic, sexist and bigoted president in history’ as he spoke at a political rally in Maryland on Tuesday.

The former Presidential candidate pledged that Democrats would work to thwart Trump’s agenda if they win back control of the House and Senate in November.

Sanders made the remarks while stumping for Ben Jealous, one of his staunchest supporters during the 2016 election who is now running for Maryland governor.

Speaking in Bethesda on Tuesday night, Sanders said: ‘We are working to make certain that the agenda of the most racist, sexist, homophobic, bigoted president in history will go nowhere because Democrats will control the House and the Senate.

‘All across this country, Republicans are working overtime to suppress the vote. They are scared to death of what happens when working people and young people and people of color come out to vote,’ he said in remarks carried by ABC.

‘They wanna suppress the vote. We wanna have a ‘huge’ voter turnout.’

Jealous was a relative unknown in Maryland, especially in political circles, until he agreed to help run Sanders’ election campaign in the state in 2016.

The following year he decided to become a candidate himself, and is now attempting to unseat one of the country’s most-popular governors – Larry Hogan. 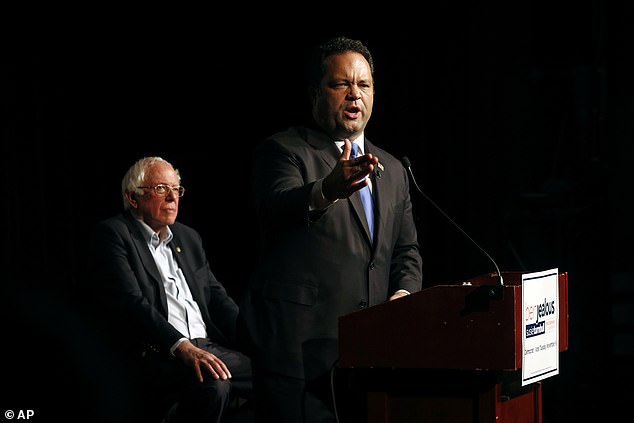 Jealous helped run Sander’s election campaign in Maryland in 2016 before deciding to become a candidate himself, but is trailing badly in the polls 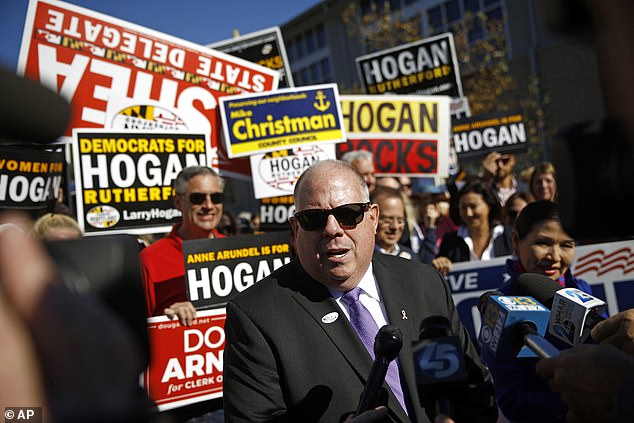 Republican Larry Hogan is running for a second term as governor, putting himself forward as a pro-business candidate who has slashed taxes and red tape

Polls published late last month by the Washington Post had Jealous trailing Hogan by 20 points, 54 per cent to 32 per cent.

Hogan, who is running for a second four-year term, has put himself forward as a pro-business candidate who has cut taxes and ‘job-killing’ red tape.

‘I stood on the steps of our historic State House four years ago and I said that we’re going to put Maryland on a new path,’ Hogan said, according to the Baltimore Sun.

‘We’re gonna try to grow our private sector, put more people to work and turn our economy around. And guess what?

‘You know, I might be new to this politics thing, I don’t really know how it works, I’m just doing exactly what I said I was gonna do.’