Bernie Sanders has been mocked online after admitting he plans to cut the hours of campaign staffers who are not getting the $15 minimum wage he campaigns for.

Field organizers put in 60 hours a week, which makes their pay equivalent to $13 an hour, it was reported Thursday.

The staffers, who are unionized, have asked campaign manager Faiz Shakir to boost their salaries to meet the level of the pay the senator has advocated for, The Washington Post reported.

Following the news Sanders told The Des Moines Register his campaign now will limit the number of hours staffers work to 42 or 43 each week – the equivalent of $15 an hour.

But the decision is now been mocked online with columnist Stephen Miller commenting: ‘For the first time in his life, socialist Bernie Sanders practices economics and buddy the results are hilarious.’

He added: ‘Why won’t millionaire Bernie Sanders, who owns 3 homes, instead of cutting hours, pay his staff a living wage? People are starving.’

Donald Trump Jr’s girlfriend and former Fox News host Kimberley Guilfoyle tweeted: ‘The rules of economics exist, even within the campaign of a socialist!’

Texas Republican Rep. Dan Crenshaw tweeted: ‘So does this fall under the category of hypocrisy, irony, or poetic justice? All three? Can’t make this stuff up.’

And Ben Shaprio wrote: ‘In which Bernie Sanders learns about economics.’

He has been mocked by Twitter users, including Kimberley Guilfoyle, after revealing the plans

House Democrats on Thursday passed legislation to raise the federal minimum wage to $15 an hour by October 2025, but Senate Majority Leader Mitch McConnell is refusing to bring it up in his chamber, sending the fight to the campaign trail.

The passage was a big win for workers and labor groups, even as it remained unlikely the bill would pass a Republican-controlled Senate.

But in a draft letter going to Shakir the workers say: ‘Many field staffers are barely managing to survive financially, which is severely impacting our team’s productivity and morale. Some field organizers have already left the campaign as a result.’

Some staff reached out to Shakir personally with one writing him: ‘I am struggling financially to do my job, and in my state, we’ve already had 4 people quit in the past 4 weeks because of financial struggles.’

Sanders has pushed for a $15 minimum wage both on the campaign trail and in the Senate, where he has sponsored legislation on the issue.

He told The Des Moines Register: ‘I’m very proud to be the first presidential candidate to recognize a union and negotiate a union contract.

‘And that contract was ratified by the employees of the campaign, and it not only provides pay of at least $15 an hour, it also provides, I think, the best health care benefits that any employer can provide for our field organizers.

‘It does bother me that people are going outside of the process and going to the media. That is really not acceptable. It is really not what labor negotiations are about, and it’s improper. 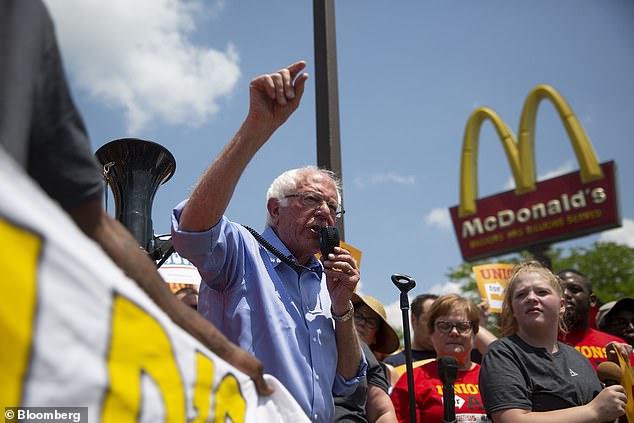 Shakir told Newsweek: ‘We look forward to continuing those discussions and obviously are disappointed that some individuals decided to damage the integrity of these efforts before they were concluded. As these discussions continue, we are limiting hours so no employee is receiving less than $15 for any hours worked.’

But the news has sparked ridicule online with @Sophiesticatio2 writing: ‘LOLZ. As if other employers, especially small business owners, won’t do the EXACT SAME THING if forced to pay a $15 an hour. They will either cut hours…or just fire people. This Econ 101…I wish ‘Democratic Socialists’ would learn it.’

@idrawrobots added: ‘So just like what businesses will do?’

And @commonsense258 wrote: ‘Proving conservatives right. Increased wages equals decreased hours. Companies & campaigns have a budget for employees salaries. That doesn’t change unless sales increase in some way. This is Econ 101.’

Sanders has also touted his support for workers’ rights. In May, he supported striking McDonald’s workers who were demanding to be paid $15 per hour.

The senator from Vermont has also supported striking teachers and striking workers at Amazon and Disney.

‘If Amazon can raise their minimum wage to $15 an hour there is no reason that McDonald’s, a company that took in $1.4 billion in profit and paid its CEO $22 million, can’t pay its workers a living wage,’ Sanders said in a statement in May.

He has also used his campaign’s massive email list to rally support for striking workers – an unusual move for a presidential candidate.

His campaign was the first of the 2020 presidential candidates to unionize its staff – a fact he touted heavily.

‘We cannot just support unions with words, we must back it up with actions,’ he tweeted in March when his campaign unionized. ‘On this campaign and when we are in the White House, we are going make it easier for people to join unions, not harder.’

The Post reported it received internal documents and emails from Sanders campaign officials describing the staffers’ battle for a higher wage.

Field staff, often 20-somethings, uproot their lives and move to early voting states to help their candidate get out the votes necessary to win the Democratic nomination.

The draft letter to Shakir notes the field staff ‘cannot be expected to build the largest grassroots organizing program in American history while making poverty wages.’

It then points out Sanders’ commitment to paying $15 per hour: ‘Given our campaign’s commitment to fighting for a living wage of at least $15.00 an hour, we believe it is only fair that the campaign would carry through this commitment to its own field team.’

Under the collective bargaining agreement reached in May with the workers’ union, United Food & Commercial Workers Local 400, field directors were not to be paid hourly but via an annual salary set at $36,000.

‘We know our campaign offers wages and benefits competitive with other campaigns, as is shown by the latest fundraising reports,’ Shakir said in a statement to The Post. ‘Bernie Sanders is the most pro-worker and pro-labor candidate running for president. We have tremendous staff who are working hard. Bernie and I both strongly believe in the sanctity of the collective bargaining process and we will not deviate from our commitment to it.’

In May, Shakir recommended raising the pay for field organizers to $42,000 and changing the workweek specifications.

He pushed for a swift union vote so he could make budget decisions on how many field organizers to hire.

The union rejected his offer because it would have kicked the field staff up to a pay level where they would have to pay more of their own health-care costs. 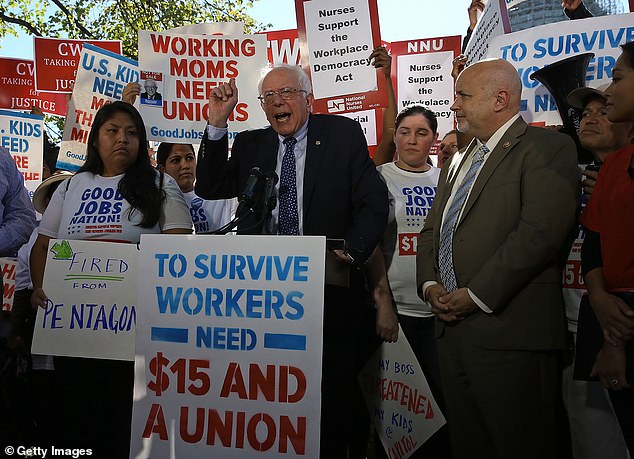 Bernie Sanders has long advocated for a $15 minimum wage, as he did at this October 2015 press conference on Capitol Hill 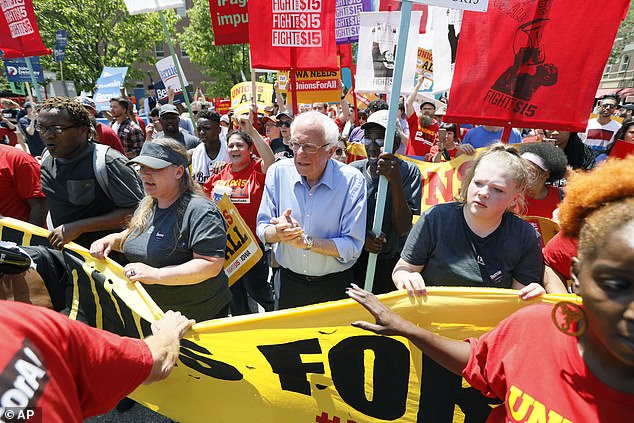 Sanders campaigning in Iowa in June. This is not the first problem Sanders’ has had with campaign workers

Shakir said he was disappointed in the union position.

‘I have no idea what debates and conversations were had, but candidly, it was a disappointing vote from my perspective,’ Shakir wrote in an email to campaign staff. ‘But the campaign leadership respected the union process and the will of the membership.’

This is not the first problem Sanders’ has had with campaign workers.

In January, the senator apologized to women who were sexually harassed on his 2016 presidential campaign and thanked them ‘from the bottom of my heart for speaking out.’

‘It appears as part of our campaign there were some women who were harassed or mistreated. And I thank them from the bottom of my heart for speaking out. What they experienced was absolutely unacceptable and certainly not what a progressive campaign or any campaign should be about,’ he said at the time.

‘The allegations that I have heard, that you have heard, speak to unacceptable behavior, that must not be tolerated in any campaign or in any workplace in our country,’ he noted.

‘To the women in our campaign who were harassed or mistreated, I apologize. Our standards, our procedures, our safeguards were clearly inadequate,’ he added.