Billed as the ‘Green New Deal,’ the 2020 presidential candidate’s proposal capitalizes on the notoriety of Rep. Alexandria Ocasio Cortez’s climate change framework of the same name and declares global warming a climate emergency.

‘Bernie will declare a national emergency on climate change and take immediate, large-scale action to reverse its effects,’ the white paper on the senator’s plan says. ‘This is an existential threat and we will do whatever it takes to confront it.’

The plan will pay for itself over 15 years and make the United States total reliant on renewable energy for electricity and transportation, an outline boasts.

Sanders drops highly-criticized recommendations to eliminate all sources of methane, including farting cows, and end airplane travel, and refocuses his plan around an Obama-era plan to build high speed rail system across the entire nation.

He also pledges to invest heavily in an electric vehicle charging infrastructure.

‘We will move beyond oil toward an electric car. Concerns of cost and whether there will be access to a charging station have prevented many people from being able to choose this low-carbon option. We are going to change that,’ the proposal declares.

It insists, ‘When Bernie is president, he is going to fully transform our energy sector away from fossil fuels, ensuring no one is priced out of this transition.’

Sanders’ plan does more than just wean the U.S. off fossil fuels. He vows to prosecute oil companies and penalize them for the release of pollutants.

He advocates for both criminal and civil suits in his plan yet leaves it up to states and local governments in a rare endorsement of federalism to determine how they’d like to be compensated.

Already known for his stance against the billionaire class and big corporations, Sanders’ plan further pits him against the oil and gas industry.

Sanders egged them on in a morning tweet promoting the plan, ‘I welcome their hatred.’

‘We need a president who will face down the greed of fossil fuel executives and the billionaire class who stand in the way of climate action,’ he said. ‘We will enact the #GreenNewDeal and bring the world together to defeat the existential threat of climate change.’ 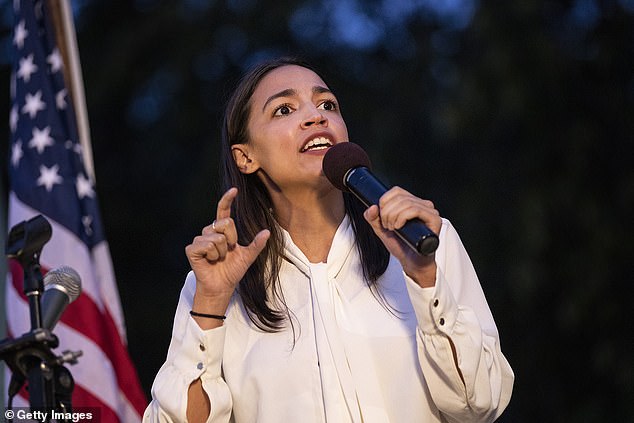 Billed as the ‘Green New Deal,’ the 2020 presidential candidate’s proposal capitalizes on the notoriety of Rep. Alexandria Ocasio Cortez’s climate change framework of the same name and declares global warming a climate emergency

AOC had not weighed in on Sanders’ plan as of Thursday morning. The Democratic congresswoman’s Twitter account has been dark for several days. Her last tweet promoted a recent appearance on ‘The Late Show’ to discuss the threat posed to humanity by climate change.

She’s teamed up with Sanders on several issues over the last several months, although she has yet to offer any 2020 candidate her endorsement.

In one of her last tweets before she went silent she said, ‘Bernie Sanders is the enormous political courage he consistently wields on behalf of others.’

Her comment came after Sanders stood up for AOC and minority women in the House who have come under assault from the Republican president. He’s fixated on the women, and Ocasio Cortez and her Green New Deal in particular.

Trump says the Green New Deal is a form of socialism that would drain the U.S. economy and send it spiraling into a recession.

‘We have a group of socialists or communists could be, could be. They’re not far away,’ he said at a Manchester, New Hampshire, rally last week, as he invoked the plan.

Sanders hit back at Trump in his Green New Deal rollout. He called the leader’s withdraw from the Paris Climate Change Agreement ‘an international disgrace’ and mocked the Republican’s claim that ‘climate change is a hoax’ crafted by the Chinese.

Climate change has charged into focus in the 2020 race, with two Democratic candidates basing their bids on what they’ve said is an urgent and existential threat.

The evening prior to Sanders’ plan’s release, one of those leading voice on climate change in the 2020 presidential content bowed out. Washington Jay Inslee called off his campaign, after it failed to generate enough traction to win him a podium at the next presidential debate.

Billionaire Tom Steyer continues to compete for the presidency on a platform that’s centered on preventing the climate from warming.