Best Christmas cottages in the UK: You’ve got five days… so head for the hills!

Families can reunite over Christmas — no matter what tier you’re in. For five days from December 23 (December 22 in Northern Ireland) three households can get together and the rule of six won’t apply.

Traditionally, many of us would choose to celebrate in the comfort of our own homes, but, with the best part of this year spent staring at the same four walls, we may be looking for a change of scene.

And, luckily, there are plenty of self-catering properties with availability during the tier-free period. From seaside cottages to stately piles, here are the most charming properties for a festive family fiesta. 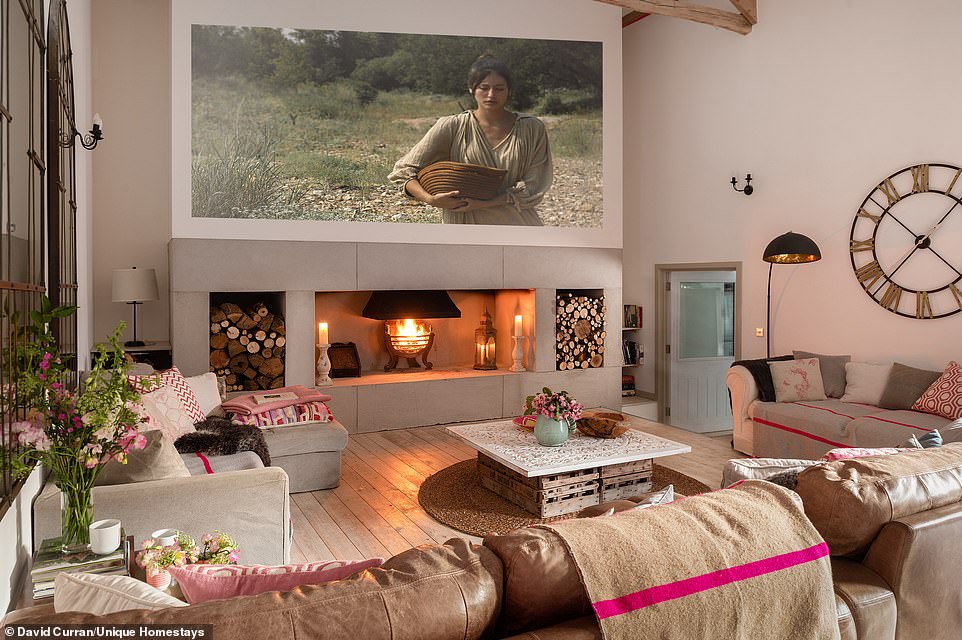 Inside Boheme’s entertainment room, which has a giant projector and a roaring fire 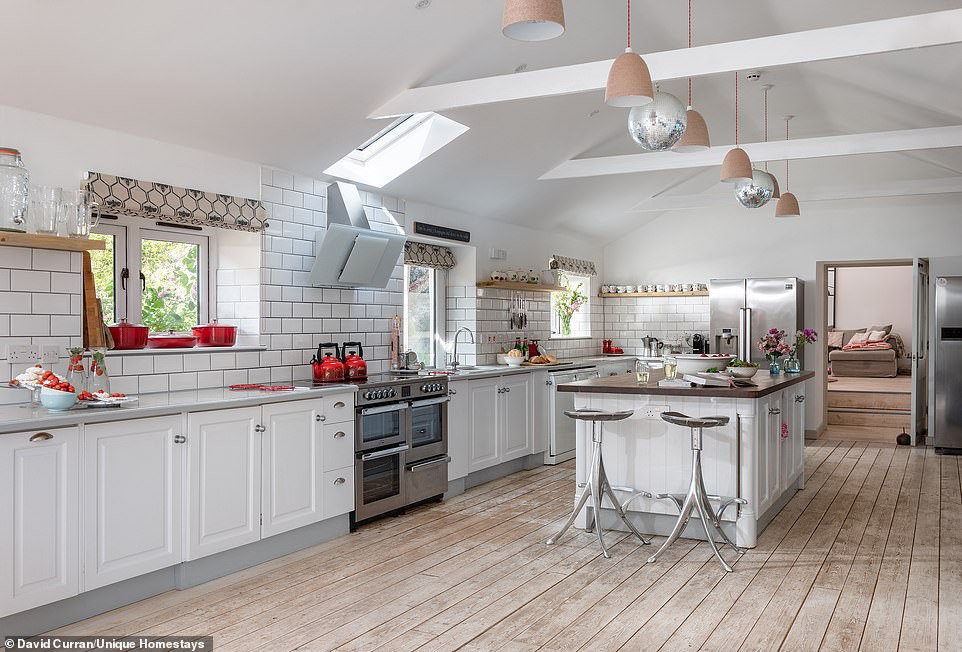 The stunning kitchen at Boheme. Seven nights from December 22 costs £15,495 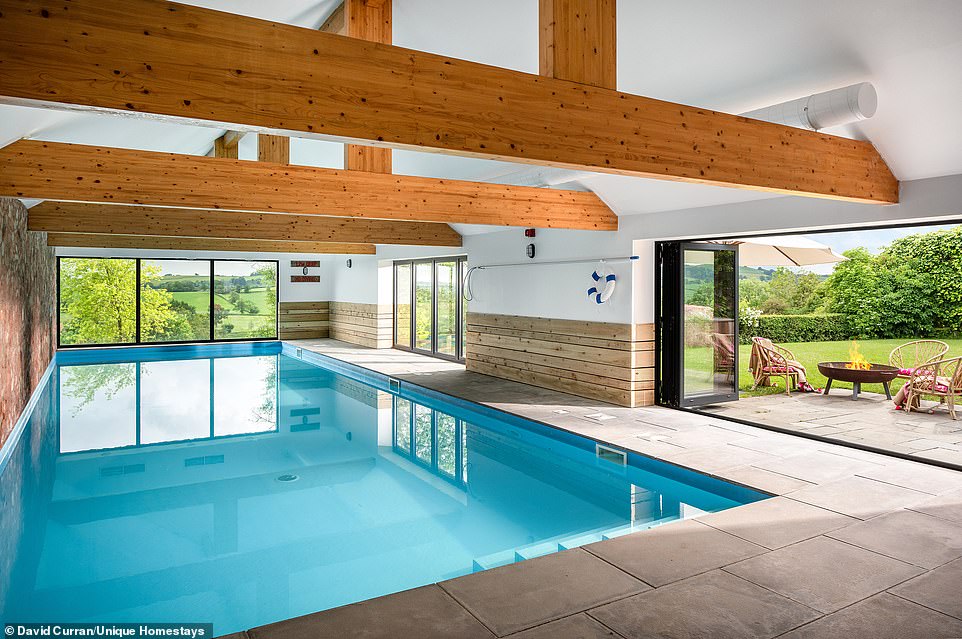 Guests can kick-start their Christmas morning with a dip in the indoor heated pool, pictured

Kick-start Christmas morning with a swim in the indoor heated pool at Boheme, a 16th-century cider press turned boho farmhouse in Somerset. Nine bedrooms, arranged in a horseshoe sleeping up to 20, sit across from the vast living area, meaning some can snooze while others stay up into the small hours chatting.

The large farmhouse table is perfectly set up for a family games night and Christmas dinner. 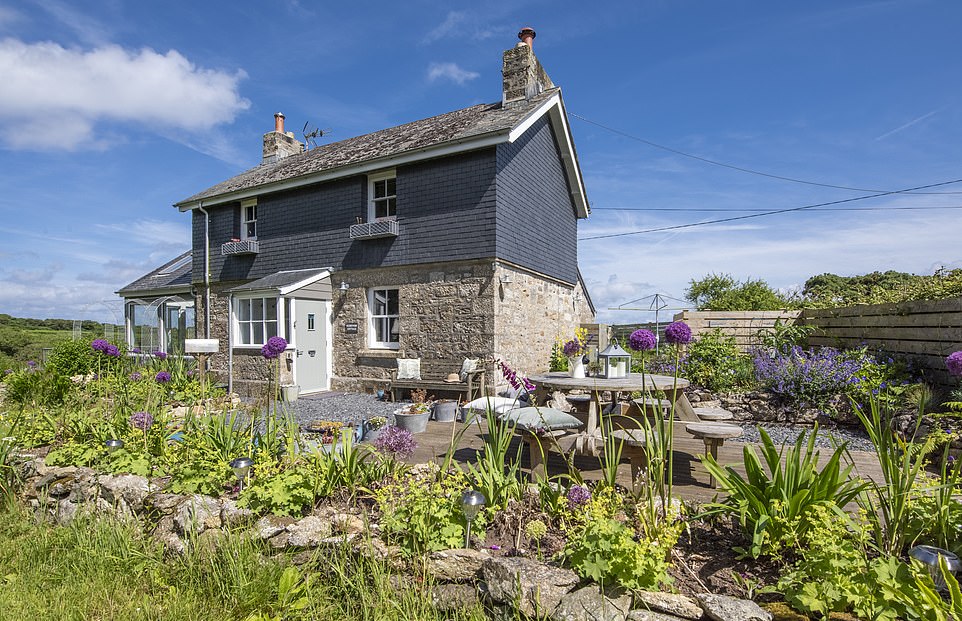 Rosewall Cottage, near St Ives, which is available for seven nights from December 21 from £2,520 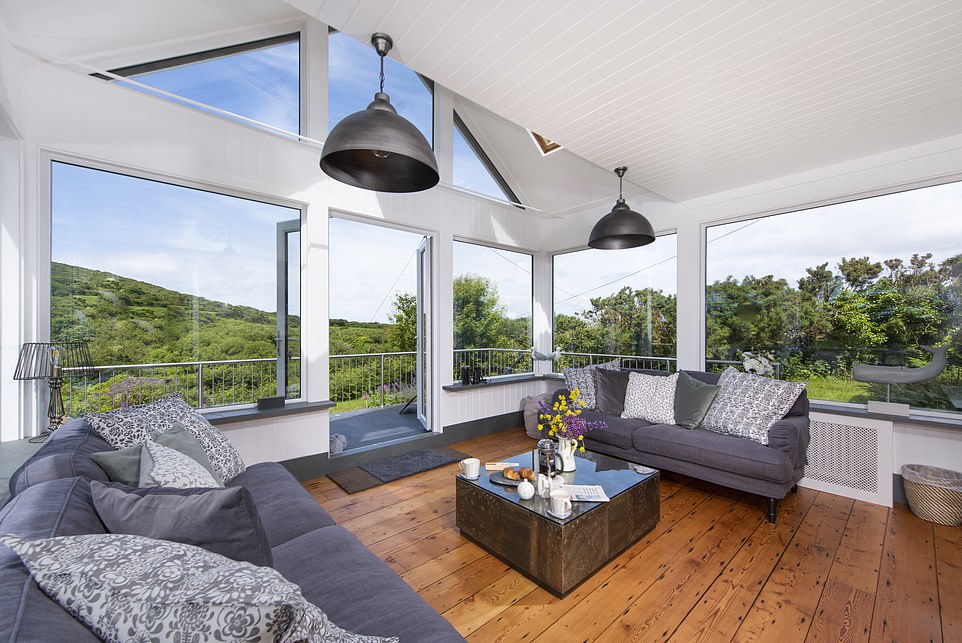 Inside the living area at Rosewall Cottage. It also has a well-equipped kitchen and three bedrooms, which sleep six

Fancy Christmas on the coast? Rosewall Cottage is just a short distance from the turquoise bays surrounding St Ives, recently voted the happiest place in Britain.

Prepare Christmas lunch in the well-equipped kitchen, before tucking in on the dining room’s French bistro table. One of the three bedrooms, which sleep six, has bunk beds.

CROWD PLEASERS: The trickling stream and pretty reservoir — which can be fished with a permit.

ALL SET FOR SUFFOLK 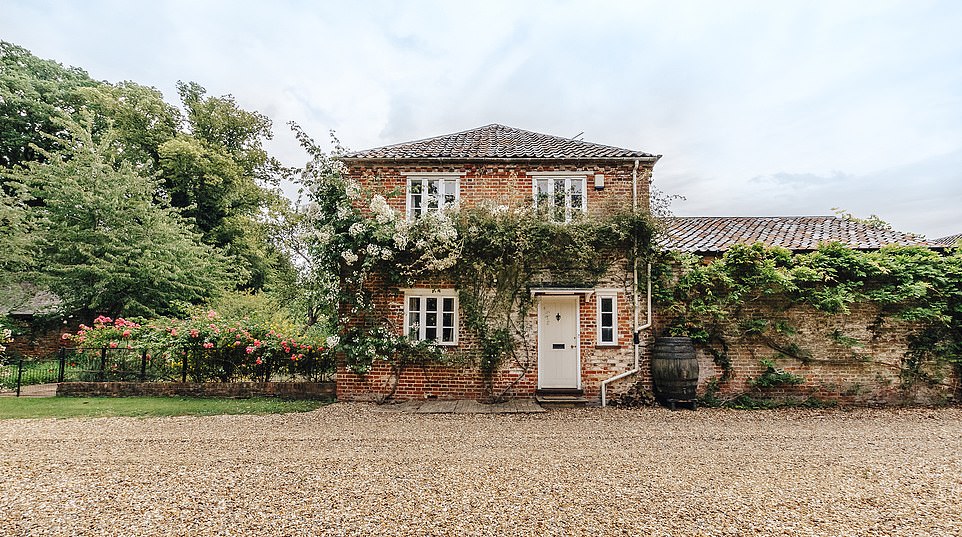 The pretty wisteria-clad Flora and Fauna cottage in Worlingham, Suffolk, which is set on 448 acres of private land 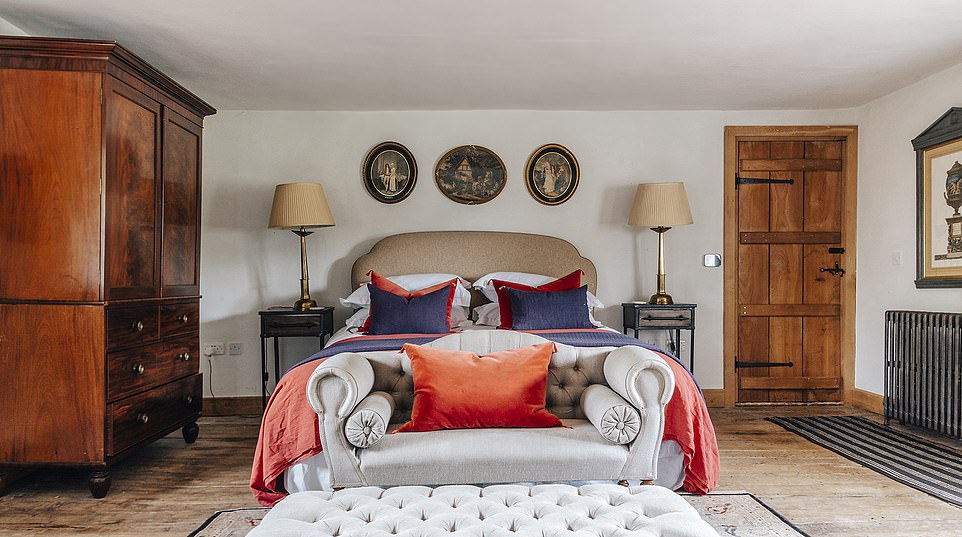 One of the property’s five bedrooms. They come with heavy curtains, Tibetan furniture and original artwork 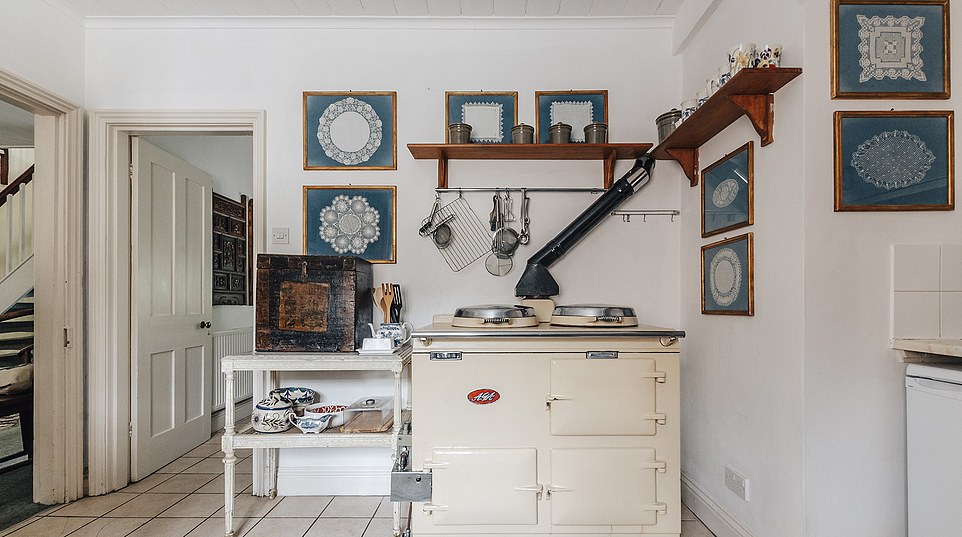 In the kitchen at Flora and Fauna there is a cream Aga, where a homely Christmas lunch can be rustled up

Properties don’t get much prettier (or quintessentially British) than wisteria-clad Flora and Fauna in Worlingham, Suffolk.

Set on 448 acres of private land (yes, you read that right), the property’s five bedrooms, sleeping nine, come with heavy curtains, Tibetan furniture and original artwork. A homely Christmas lunch can be made in the traditional cream Aga.

CROWD PLEASERS: Those grounds, including the wild meadows and trees, some hundreds of years old. 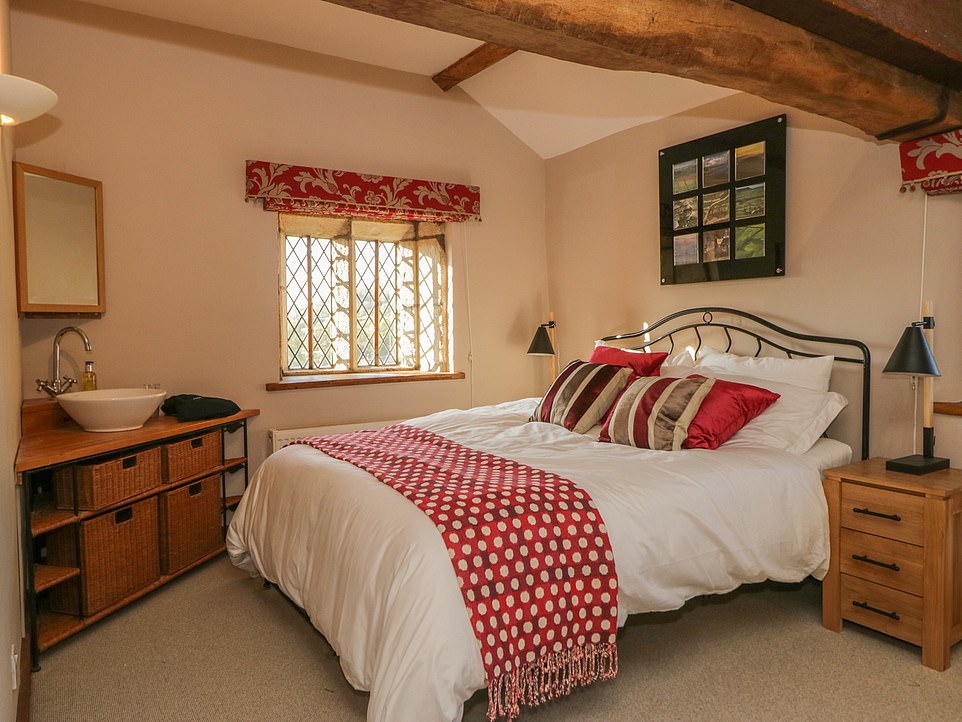 High Hall is a 16th-century country house bursting with history and character. Set on the edge of the delightful village of Appletreewick in the Yorkshire Dales National Park, the Grade II-listed property has seven bedrooms (sleeping 14), featuring mullioned windows and oak beams.

CROWD PLEASERS: The Minstrels’ Gallery, a great place to sit and read. 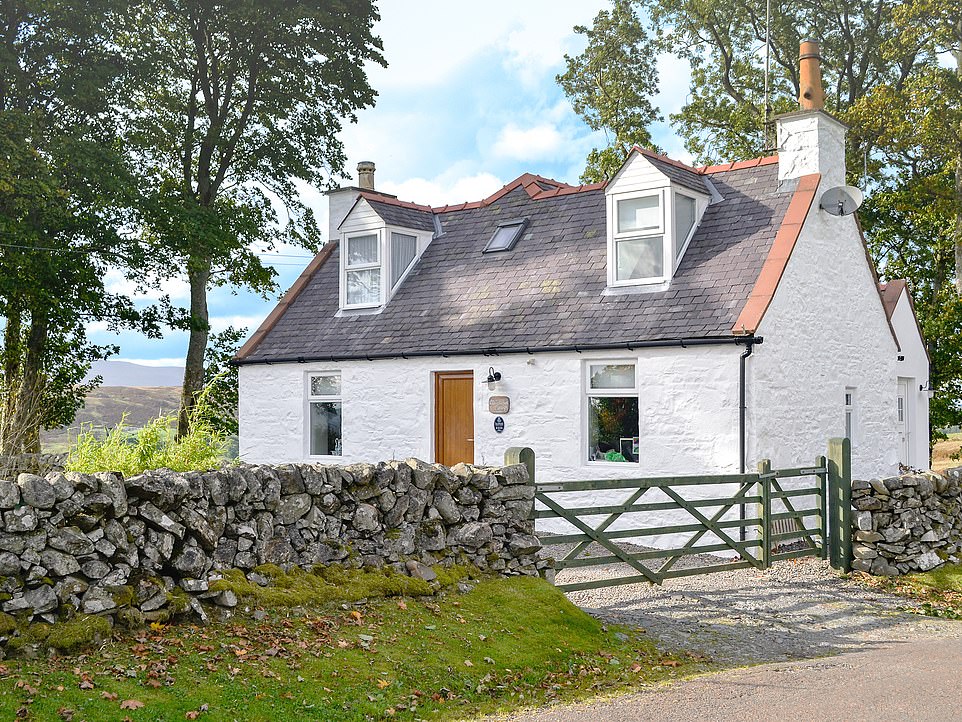 Cleughbrae Cottage in Dumfries and Galloway, which is available for seven nights from December 23 for £899 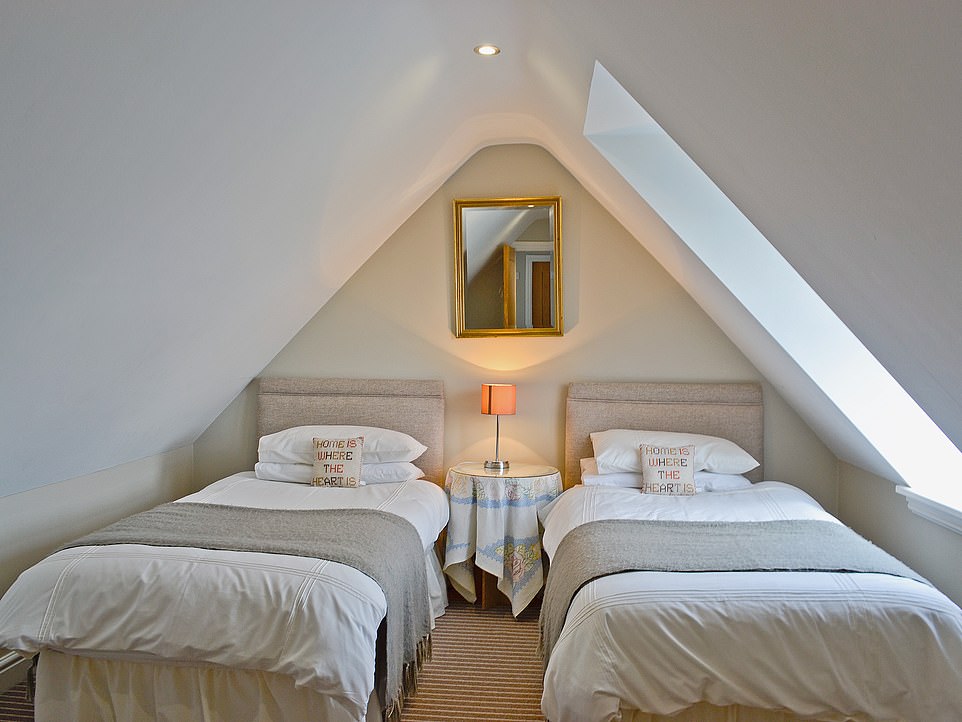 Inside the cottage, which can sleep up to six people. It is close to the Dark Sky Park and Scotland’s Southern Upland Way

Spend Christmas Eve watching the sun dip behind the mountains and the stars appear from Cleughbrae Cottage in Dumfries and Galloway. The pretty property, which sleeps six, is close to the Dark Sky Park, as well as the Southern Upland Way, Scotland’s 214 mile coast-to-coast walk. 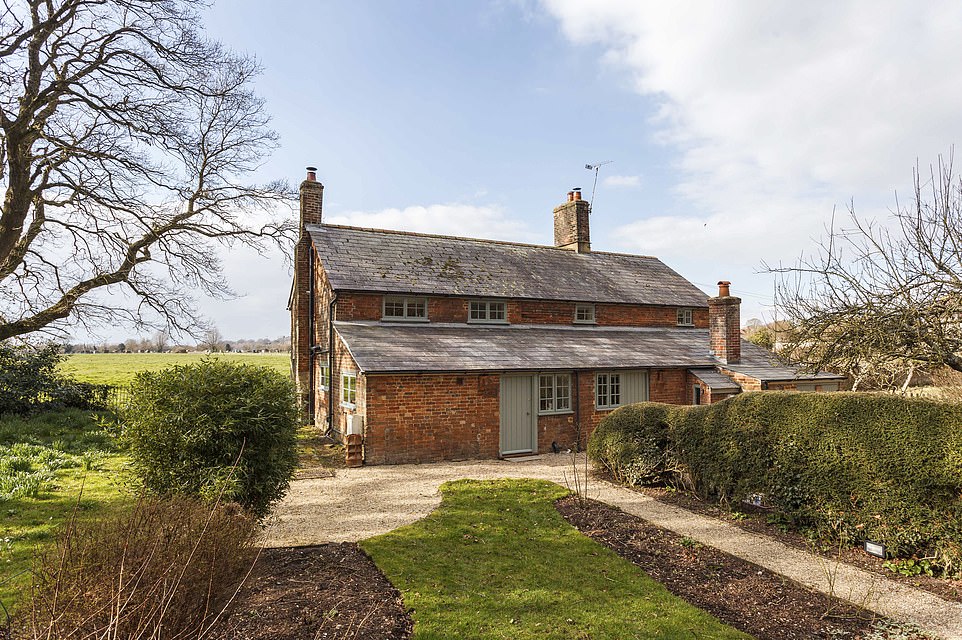 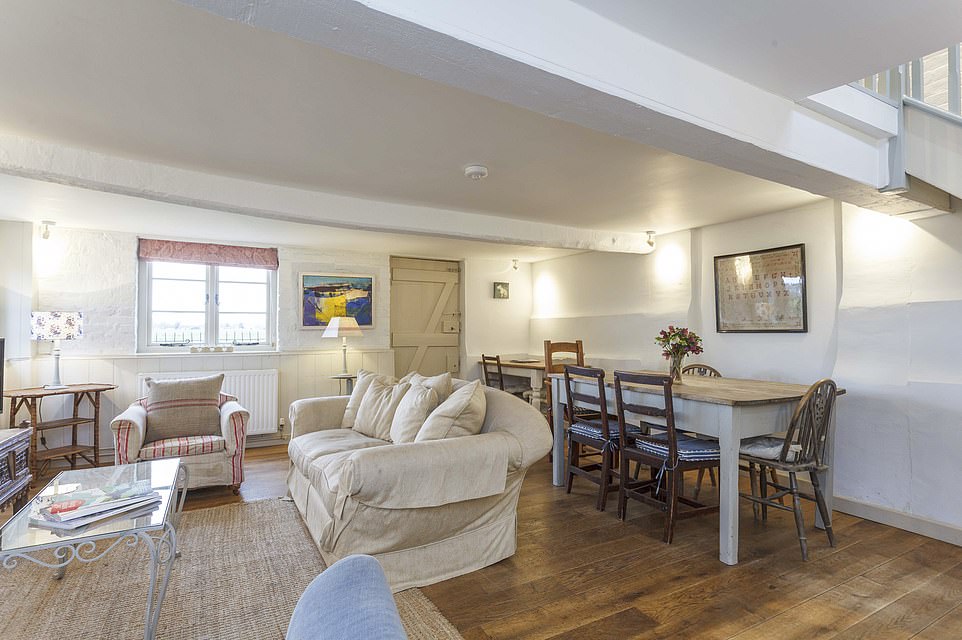 The living area at Meadow Cottage. There are unlimited logs for guests to use on the stove in this room

This lovingly restored 18th-century cottage looks like it’s come straight from the front of a Christmas card.

In the delightful Dorset town of Wimborne Minster, Meadow Cottage sleeps four in the main property, and a further two in the shepherd’s hut in the walled garden — perfect for adventurous children.

CROWD PLEASERS: The nearby Jurassic Coast, as well as unlimited logs for the stoves in the shepherd’s hut and living room.

COSY IN THE COTSWOLDS 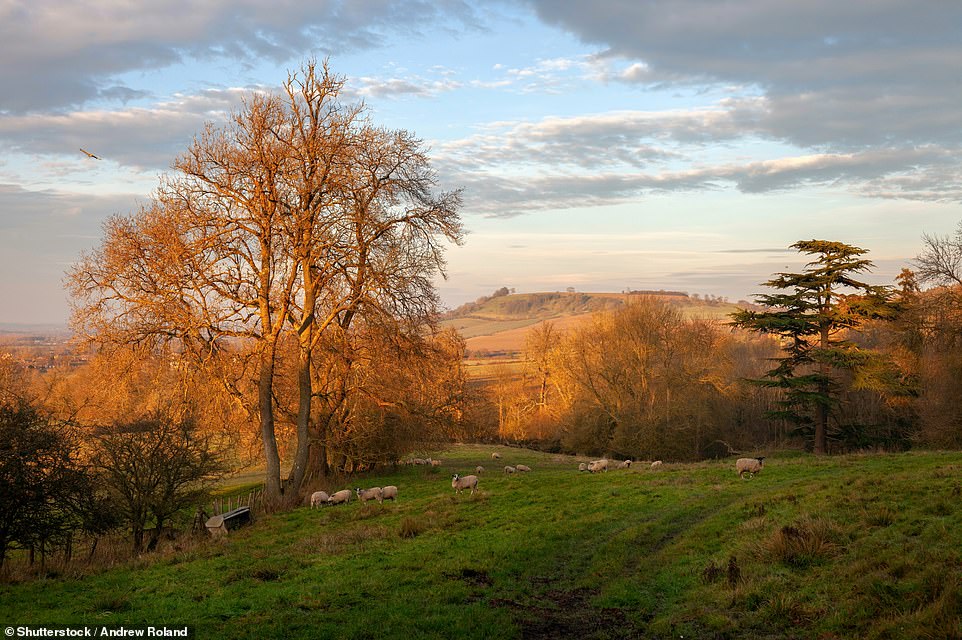 Guests at Norton Hall in Mickleton, a Georgian manor house, get spectacular views over Meon Hill, pictured, in the Cotswolds

Norton Hall, Mickleton, is a magnificent Georgian manor house, with spectacular views over the Cotswolds’ Meon Hill. It sleeps up to 18 in four ensuite bedrooms and a further five bedrooms sharing two bathrooms.

Open fireplaces feature in many of the rooms — perfect for Father Christmas to squeeze through.

CROWD PLEASERS: The 12 acres of private gardens, bursting with seasonal fruit and vegetables which can be picked for Christmas cooking and crumbles.

BOOK IT: Seven nights from December 21 for £15,000 (luxurycotswoldrentals.co.uk)

SLIDE INTO THE BEACONS 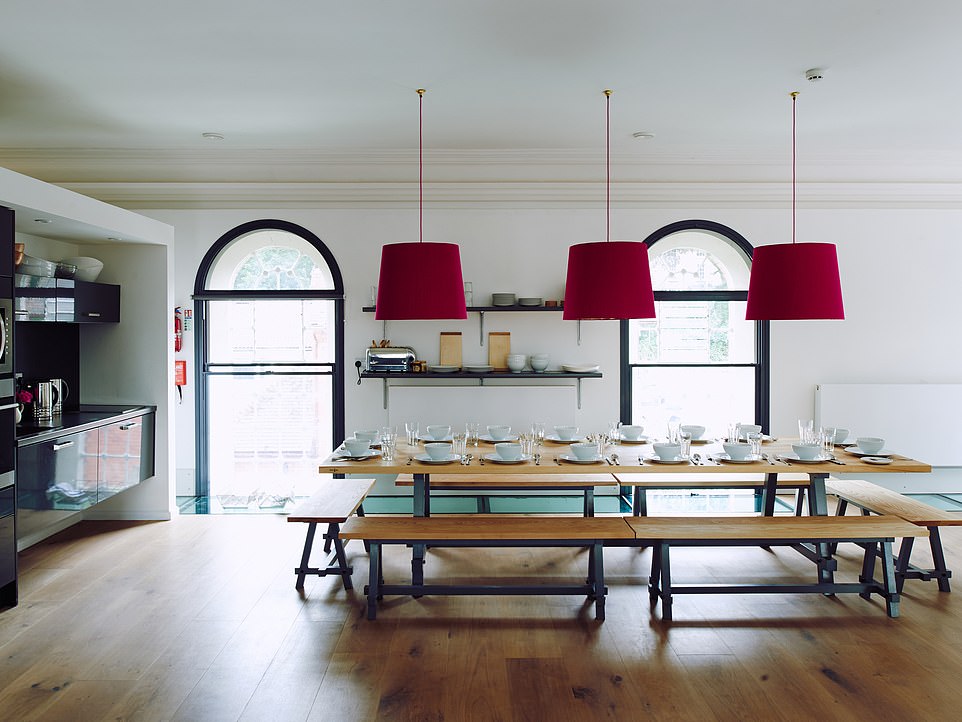 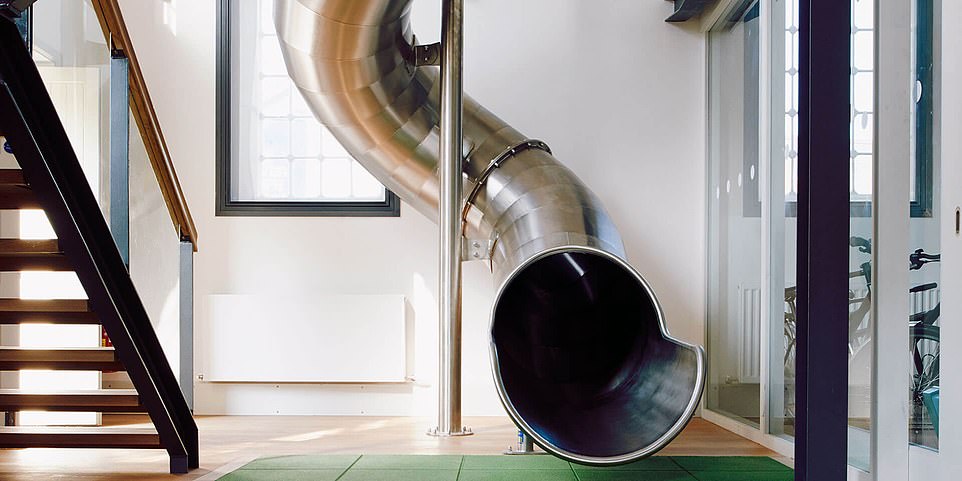 One of the crowd-pleasing features inside the Beautiful Bunkhouse is its indoor slide, pictured

Watch Auntie Julie slither down for breakfast via the slide between floors at the Beautiful Bunkhouse, a converted church in Wales’s Brecon Beacons.

Great for outdoorsy teens, it feels like a souped-up youth hostel, with 12 pod-style bunks (and a large bedroom) sleeping 14.

CROWD PLEASERS: The slide. The ice-cream van at nearby beauty spot Hay Bluff.

TIER: No tiers in Wales yet. 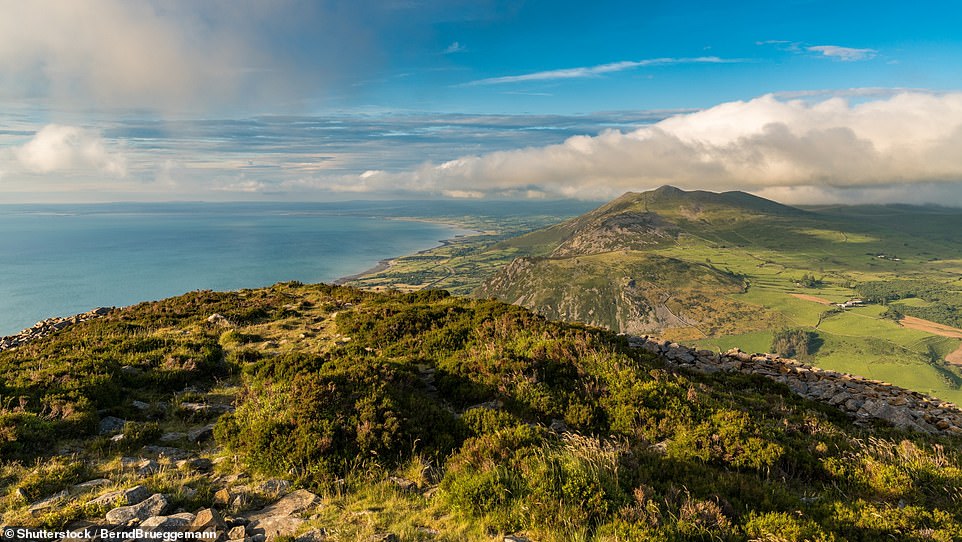 The pretty converted stable of Bwthyn Stabal can be found on the peaceful and wildlife rich Llyn Peninsula, pictured

Just a ten-minute walk from the beach, Bwthyn Stabal on the peaceful, wildlife-rich Llyn Peninsula is ideally placed for a family of nature lovers.

The pretty converted stable has three bedrooms, some with sea views, and is surrounded by private woods and walled gardens.

CROWD PLEASERS: Two of the bedrooms have Victorian open fireplaces.

TIER: No tiers in Wales yet.

BOOK IT: Seven nights from December 22 for £949 (qualitycottages.co.uk).