Whether you are jetting off for some winter sun, planning a New Year skiing trip or a weekend city break – sorting your holiday money is a top priority.

Swipe your everyday credit card or debit card abroad and you will end up paying through the nose, as most charge an extra 3 per cent for the privilege.

But there are ways to avoid extra costs when making purchases or withdrawing money abroad.

Here we pick the best accounts which offer small or, even better, no fees – a worthwhile money-saver, particularly if you are a frequent-flyer.

On holiday? Relax and make sure you’re not spending too much on fees

While it is hard to predict what rates will do in the future, the pound plummeted against both the US dollar and the euro haven’t returned to pre-Brexit vote levels hitting travellers wallets hard.

Now it is more important than ever to avoid hefty fees from your bank to make sure your cash stretches as far as possible while on holiday.

They may be free to use at home, but debit cards can be serious offenders when it comes to extra holiday costs.

Some provider charge as much as  £1.50 every time you use your card on top of loading the exchange rate.

Big charges mean that you should avoid taking out small amounts of cash often and try to take out larger amounts less regularly, although this brings its own risks in terms of theft.

Luckily, if you don’t want to pay out to spend, there are a few options out there that can help you to avoid extra costs.

Starling was the first of the challengers to launch an app-only current account in the UK.

While banking on your mobile might not be for everyone the fee overseas spending and withdrawals everywhere in the world might be enough to persuade you – a perk unavailable anywhere else.

Rival challenger Monzo previously offered the same deal, but it recently added a cap on free overseas withdrawals of £200 per month, with a 3 per cent charge after that.

There are no guarantees Starling will be able to sustain its free withdrawals, but it is currently the cheapest account on the market for overseas spending and withdrawals.

The app lets you categorise your spending, freeze your card temporarily if you lose it and set up savings goals.

If you stray into your overdraft there are no usage fees, but interest will be applied at 15 EAR per cent. 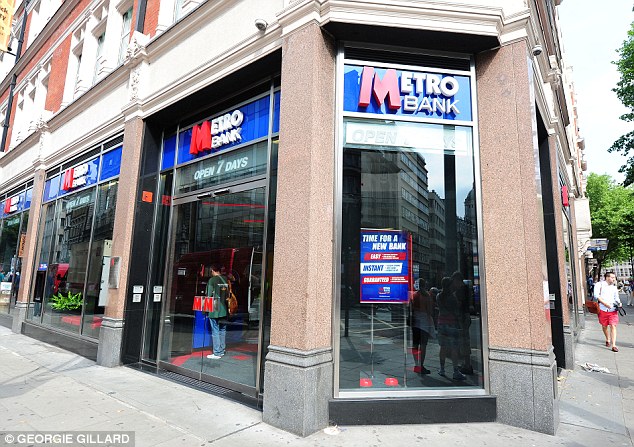 Selfie banking: Metro says customers can open accounts online within 10 minutes – and it means you don’t need to go into branch

Metro only has a few branches but it also allows online applications. The bank also has a new mobile banking tool with beefed-up budgeting features.

No overseas charges in Europe

It will charge 2.5 per cent on card purchases – and £1.50 on cash withdrawals from ATMs.

Charges are capped at six a month – but bear in mind you may have to start paying interest on them if it tips you into the red.

Virgin Money has an Essential Current Account offering no fees for overseas purchases. You will need to avoid using the card to take cash out at an ATM abroad as it applies a £1.50 charge.

The Essential Current Account is a basic account without an overdraft – these can be a helpful tool for anyone looking to avoid hefty borrowing fees.

It also offers 0.75 per cent interest. You can only apply in branch however. 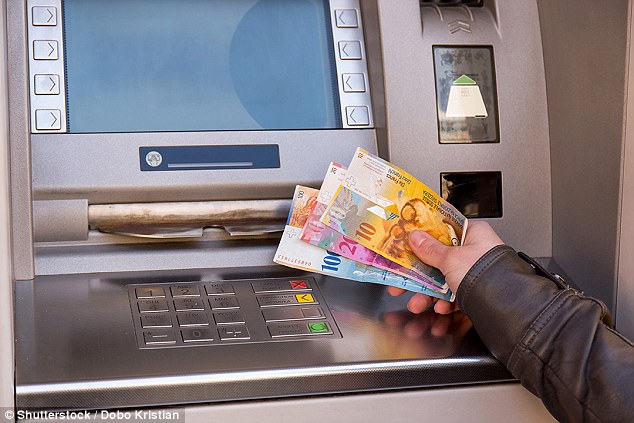 Watch out: Cash withdrawals abroad often come with flat fees of up to £1.50 each

Most cards add around 3 per cent cost to the exchange rates banks themselves get.

You can avoid this by picking a specialist card, which won’t apply non-sterling transaction fees or cash withdrawal charges.

Watch out: Most providers will charge interest on cash withdrawals immediately, until you pay off the amount in full.

To avoid clocking up interest therefore avoid leaving it until you get home to pay off the balance after using an ATM. 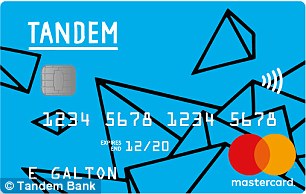 Tandem: Spenders earn 0.5 per cent back on any purchase over £1

Challenger Bank, Tandem, has a cashback credit card offering 0.5 back on all spending.

Another bonus – it won’t charge you overseas fees for spending or withdrawals.

However you can only access your account via its smartphone app, which may put some people off.

The bank also offers an option with no overseas fees for those with a poor credit rating. You can read more about this in our full review of the Journey credit card.

You earn 0.5 per cent back on every transaction over £1.  It comes with a beefed-up smartphone app which offers personalised spending insights.

You can also link existing current accounts through the app and pull in information from other banks. Plus you to set budgets, see where your money is going and get balance projections based on your regular bills and spending habits.

There are no overseas transaction charges for using the card abroad to spend or withdraw cash.

However interest on all cash withdrawals (at home and abroad) is applied immediately, so you will want to pay it off as soon as possible.

Tandem won’t load the rate and users receive the MasterCard exchange rate which tends to be more competitive than Visa’s.

Interest on purchases and withdrawals is 18.9 per cent APR, although you may be offered a higher rate when you apply depending on your credit score. 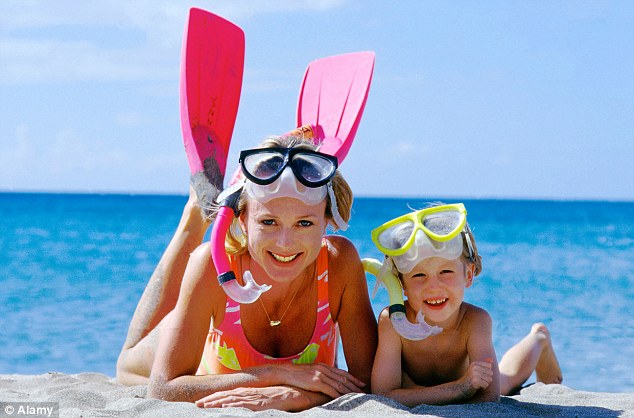 More to spend: Saving money on spending and cash fees means you will have extra for your trip

Barclaycard’s Platinum Travel card charges no transaction fees for purchases or withdrawals abroad – but only until 31 August 2022, after that, you will be charged 2.99 per cent.

Plus it comes with 0 per cent interest on purchases for the first 12 months.

Unlike some rival offers you won’t be charged interest on overseas withdrawals as soon as they are made, you have the typical 56 day grace period.

Plus it is one of the few overseas spending cards which also offers a 0 per cent interest deal on purchases.

This means you will be charged nothing to use your credit card to spend while abroad even after the statement period, as long as you pay it off before the 12-month 0 per cent deal ends.

Standard interest once the 0 per cent promotion ends is 19.9 per cent. Withdrawals at home will clock up interest at 27.9 per cent.

The card is a Visa which typically offers worse exchange rates than Mastercard. 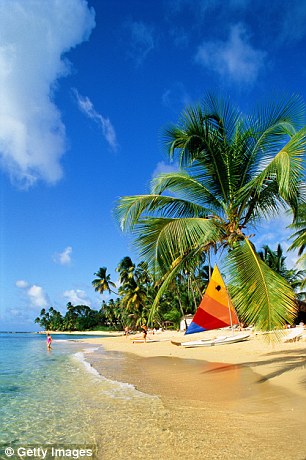 Halifax demands no extra charges for spending abroad anywhere or any extra for withdrawing cash at home and abroad.

Standard interest is set at 18.9 per cent – there are a few options (below) which have lower interest rates on spending.

But its a Mastercard which means conversion rates are much better.

There is no annual fee – so there are zero extra costs as long as you pay off your balance in full every month.

Interest is charged immediately at the card’s standard rate of 18.9 per cent on cash withdrawals, but you can minimise the cost by repaying in full as soon as possible.

Purchases abroad don’t incur any interest as long as you repay the amount by the date shown on your statement.

Depending on your credit score applicants may be given a higher interest rate of either 21.9 per cent or 25.9 per cent.

You will be charged £12 if you pay your balance late, have a payment returned or go over your limit. 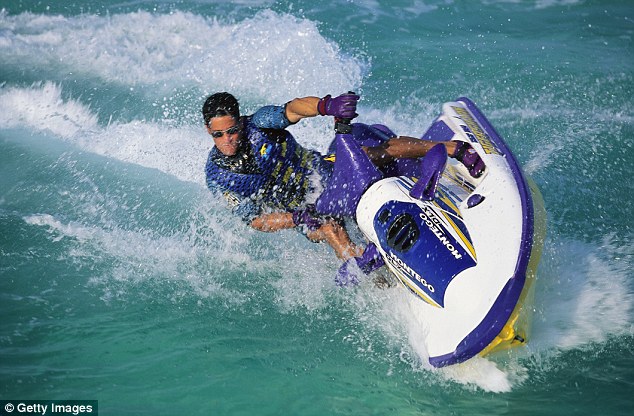 Water sports: Credit card fees can push up the cost of paying for holiday activities

The best of the rest

Creation’s Everyday Credit Card charges no fees for withdrawing money or spending overseas but it is a relative newcomer to the market which may put people off.

It does however have a lower-than-average APR at just 12.9 per cent but those without a spotless credit score couple be offered a rate of up to 21.9 per cent. It applies interest on cash withdrawals as soon as they are made.

Santander’s Zero Credit Card again has no overseas fees for spending or withdrawing cash from an ATM anywhere in the world.

There is no monthly fee and a standard interest rate of 18.9 per cent.

Again withdrawals begin to clock up interest as soon as they are made, and at a higher rate of 29.9 per cent.

Aqua Advance credit card is geared towards those with a less-than-perfect credit rating, offering them the change to reduce their APR from 34.9 per cent to 19.9 per cent after three years if they use the card responsibly.

It charges nothing to make a purchase overseas on the card however cash withdrawals clock up a 3 per cent charges (minimum £3).

The Post Office credit card comes with no purchase fees on when shopping abroad or when buying in a foreign currency from home, online or over the phone.

There are also no cash fee for using the card to buy travel cash at the Post Office. Withdrawing money from an ATM overseas will incur a 2.5 per cent fee, set at a minimum of £3.

Virgin Money has a Travel Credit Card which also offers 0 per cent interest on purchases and balance transfers for 12 months and charges nothing for spending abroad.

However the bank applies a 5 per cent cash withdrawal fee on when you use an ATM abroad so watch out. Interest on cash withdrawals will also be applied instantly.

WHAT ABOUT A PRE-PAID CARD?

Currency cards offer holidaymakers the chance to load up a card with money to spend while they are away and potentially benefit from lower rates.

Loading up a card in advance has the benefit of locking in the rate which means you know exactly what you have to spend.

Travellers should make sure these rates are better than their bank and check all the small print.

Find out more about how they work here

FairFX offers This is Money and MailOnline readers a free MasterCard prepaid card, which usually costs £9.95.

The Prepaid Revolut Mastercard uses an app and claims perfect interbank rates for most currencies. It carries no spending fees or cash machine withdrawal fees up to £200 a month on its free account.

WeSwap offers a card that matches travellers up with others who need to change currency and uses an app. It says that it always uses the real mid-market exchange rate and the amount you pay depends on how quickly you need the money. You can read more about the company here.