The best friend of a troubled signer, who fell to her death from a 19th floor London apartment block, has paid tribute to his ‘princess’.

Bethany-Maria Beales, 22, plunged from a balcony and died from catastrophic injuries when she landed on a glass-covered walkway 13 floors below.

She had gone to a friend’s flat in The Heron apartment building on Saturday lunchtime – an exclusive 35-storey building in the City – where properties cost up to £10million.

Her body was discovered on the roof of the sixth-floor terrace at 1.22pm and detectives arrested a man and a woman, both 38 and believed to be a married couple, at the scene on suspicion of murder. They have now been bailed.

Today, one of her closest friends, Adrian, paid tribute to her by sharing a video of her singing to him on his birthday.

Today, one of her closest friends, Adrian, paid tribute to her by sharing a video of her singing to him on his birthday 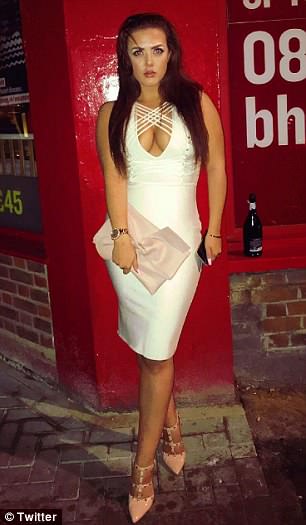 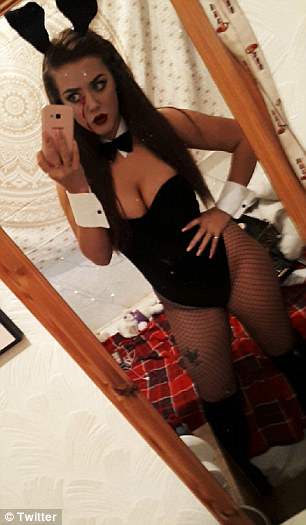 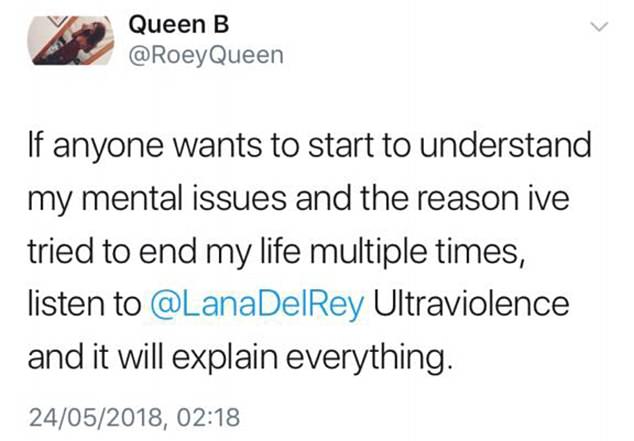 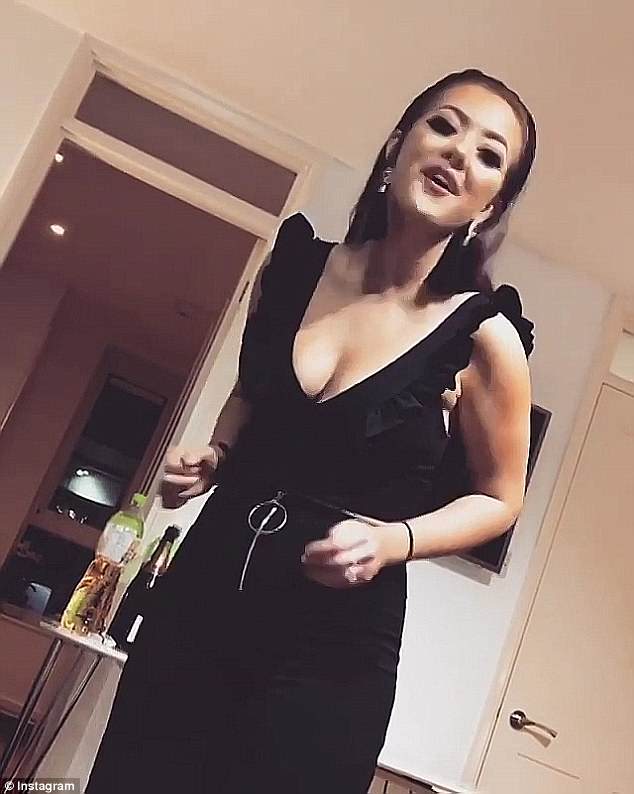 Posting the clip on Instagram, he wrote: ‘The most amazing, beautiful, caring, genuine, funny, loving, humble human being that entered my world has been taken away from me!

‘She wasn’t just my friend, she was my best friend, my girl, my family and now she’s gone.

‘I was looking forward to you being my summer ball date this weekend and for our first holiday together this summer.

‘ I love you so much my princess, we’ve made many beautiful memories I will forever cherish.

‘Thank you for your love, loyalty, amazing memories, for singing “Don’t Cry For Me Argentina” at 4 am on my birthday.

‘I’m going to miss you more than anything in this world and this is one of the hardest things I’ve had to go through in my life.

‘You always used to you call me your little angel, now you’re my sweet beautiful angel.

‘I am truly blessed that I had you and can’t wait for the day until we meet again.’

Police fear an aspiring actress and singer may have been pushed to her death from the 19th floor of a luxury apartment block just two days after she confessed to friends: ‘I’ve tried to end my life multiple times’.

Roehampton University graduate Bethany-Maria had been working in a Soho bar while pursuing her dream of being professional singer and actress. 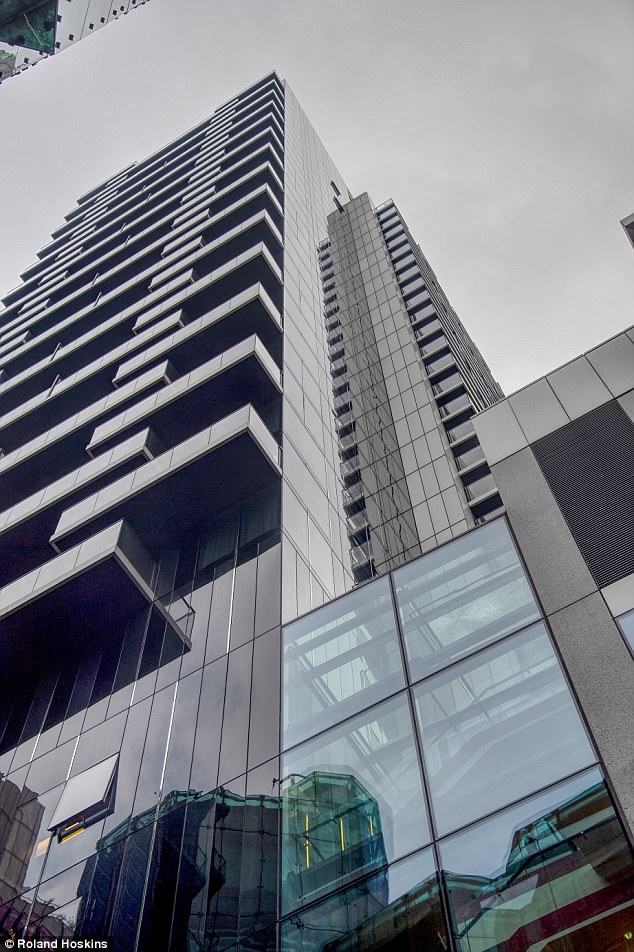 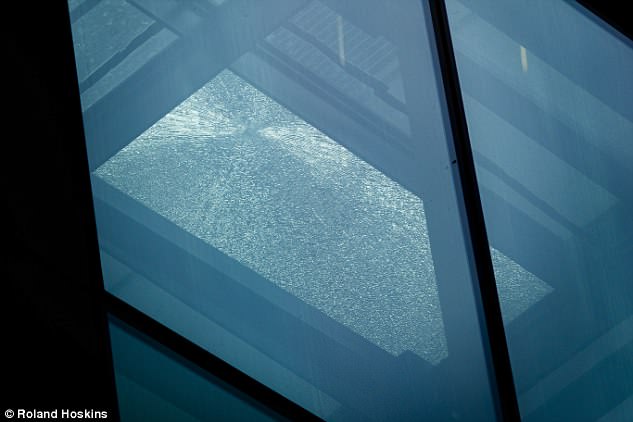 Images have shown damage to the building where Bethany-Maria Beales died. It is not clear if the glass was damaged in the incident

Bethany’s tweet on her mental health problems referenced the song Ultraviolence by Lana Del Rey, which saw the singer accused of glorifying domestic violence in Time magazine due to lyrics such as ‘he hit me and it felt like a kiss’, which is a reference to The Crystals’ 1962 song about a real life case of a man beating his girlfriend.

Bethany-Maria went to The Heron apartment block close to Moorgate Tube station on May 26.

The night before she had been clubbing and posted on Facebook about being overwhelmed at seeing rap singer The Weeknd.

At 1.53am on Saturday she told friends that the star had touched her back and said: ‘I am hyperventilating and think I am about to have his child.’

It is not clear where she spent the night but she went to see friends in the City later that day.

City of London Police said two people, a man and a woman both aged 38, had been arrested on suspicion of murder and released under investigation.

Officers were called by London Ambulance Service paramedics at 1.22pm, the force said.

The Heron building, where Bethany is believed to have been before she was found dead, is in the sought after Barbican area and comprises of luxury apartments and a private club.

The exclusive 35-storey building offers residents a 24-hour concierge service, a garden terrace, a cinema and a gym.

Last night, Miss Beales’s family, who live in St Helens, Merseyside, were too upset to discuss her death.

But in a statement, they said: ‘Beth was a kind, funny, loyal, intelligent, talented and stunningly beautiful person who changed the lives of everyone fortunate enough to know her and lucky enough to be loved by her. She was more than a daughter, grand-daughter, niece, cousin, step-sister, step-auntie, goddaughter or friend. She was the world to us all.

‘She had the brightest smile and the most beautiful singing voice.

‘She was our songbird. She had an amazing talent that, if it had been seen by the world, would have become known to millions.

‘To say we will miss her does not come close to describing how we feel. Our world will never be as bright again now that our shining star has gone.’

Aspiring singer Bethany Maria Beales was found dead after falling from a luxury apartment block on Saturday, hours after posting happily on Facebook about seeing singer The Weeknd 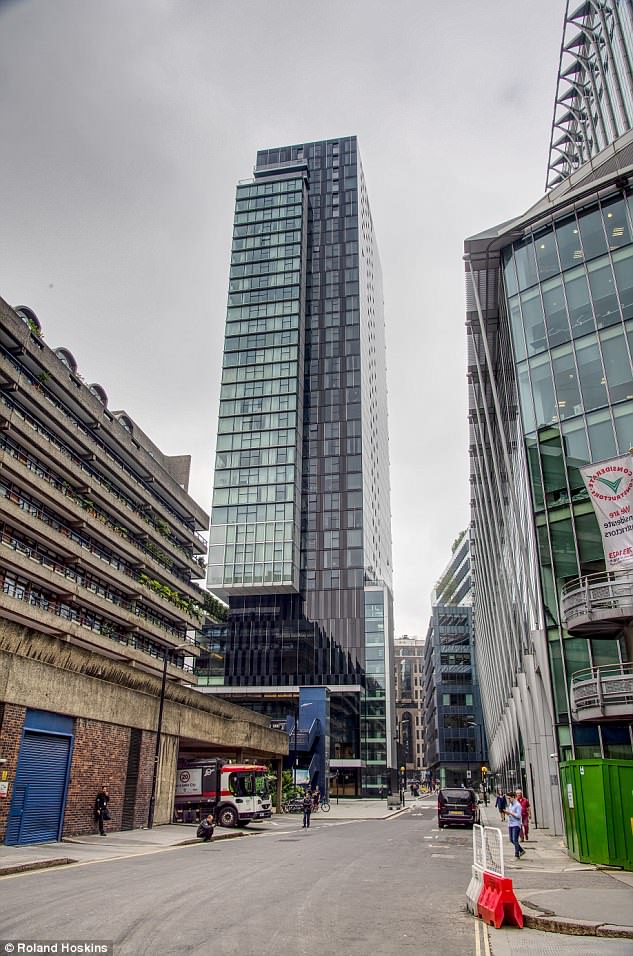 Police were called to The Heron building on Saturday lunchtime after residents rang for an ambulance. 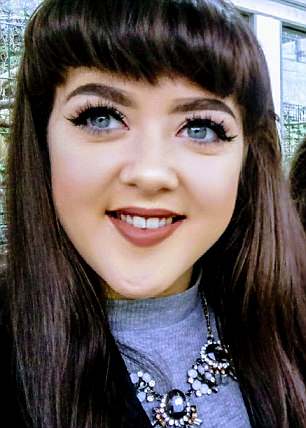 The newly built tower block has a 24-hour concierge service and includes a garden terrace, private club, cinema and gym.

Miss Beales’s body was found on the roof of a sixth floor glass staircase linking the complex to the Guildhall School of Music and Drama.

City of London Police officers arrested the man and woman on suspicion of murder. They have since been released but remain under investigation.

Despite the soaring violence across London, this is the first murder inquiry in three years for the specific City of London police force.

According to photos posted online, Miss Beales recently graduated in drama and English literature from the University of Roehampton, in south west London.

Writing on one site aged 18, she described herself as an ‘actor, extra, dancer, teacher/choreographer, singer.’

For the past few months she had been working as a sales executive and promoter for a popular Soho bar. 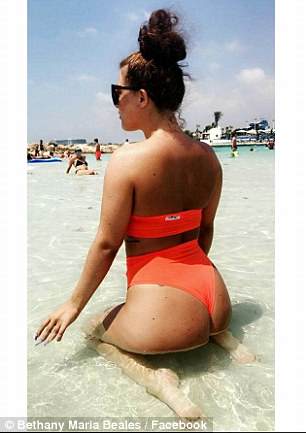 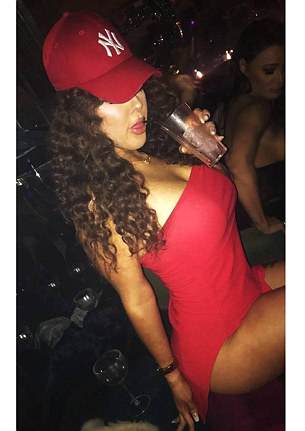 Bethany-Maria Beales, 22, died after falling from the Heron building in London’d Barbican 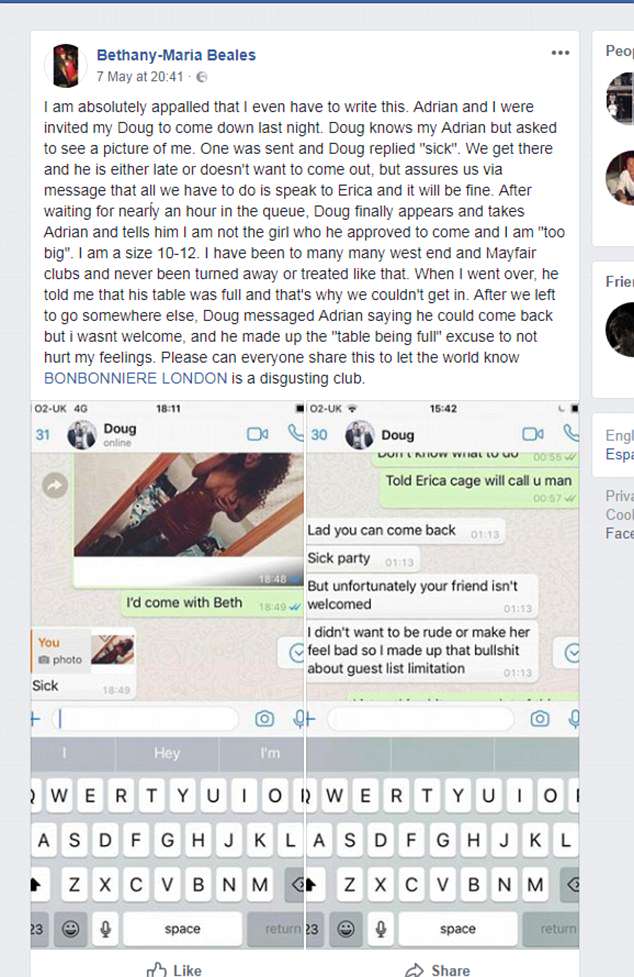 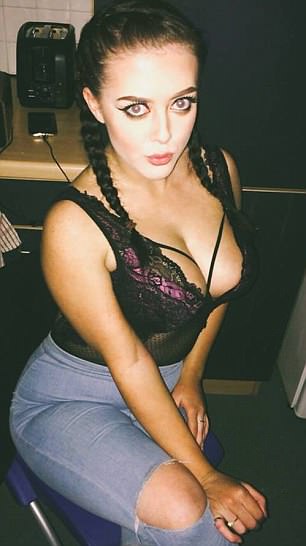 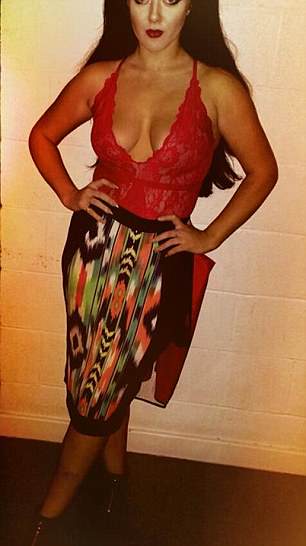 Police are treating the death of 22-year-old Bethany-Maria Beales as suspicious. She wrote on Facebook just hours before her death

Hours before her death she posted on Facebook about being overwhelmed at seeing Canadian singer Abel Tesfaye, better known by his stage name The Weeknd. She had also strongly criticised the promoter of a Soho celebrity haunt for refusing to allow her in to the club, a decision apparently based on her appearance and weight. 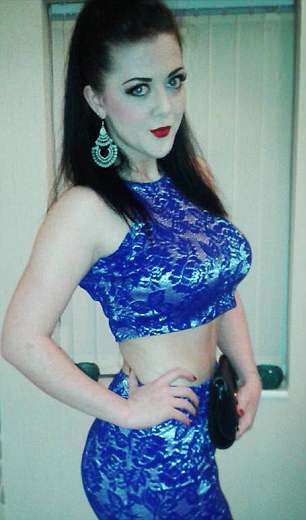 Bethany-Maria Beales, 22, was an aspiring singer but died tragically after falling from the Heron building

Her friend Joe Kozak paid tribute to Miss Beales, writing online: ‘In the blink of an eye life can be taken from us.

‘You were a beautiful, intelligent, funny and sassy individual who many called a friend.

‘You will be sorely missed and the world has lost a little bit of its glitter. Sleep tight and fly high.’

Another friend Suzie Ozcan described Miss Beales as ‘the most kind-hearted, beautiful soul I had ever met’.

She added: ‘I am so sad to see this news. Such a young and talented soul!’

Appealing for witnesses, Detective Chief Inspector Edelle Michaels said: ‘We would like to extend our thoughts and condolences to Bethany’s family and friends at this difficult time and reassure them we are doing everything we can to determine the circumstances of this tragic incident.

‘Anyone who may have witnessed the incident, or may have information which can assist our investigation is asked to contact police as soon as possible.

‘We are particularly keen to speak to anyone who was in the Heron building, or the vicinity, on Saturday that may have seen or heard something.’ 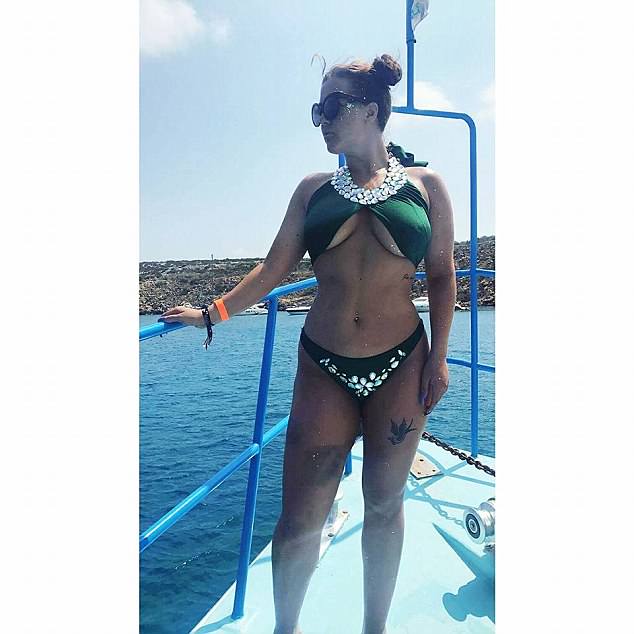 What and where is the Heron building? 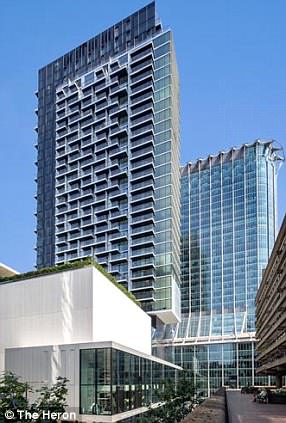 The Heron building in Barbican where apartments cost up to £10million

The exclusive 35-storey the Heron building which offers ‘panoramic views’ of the city is located in the cosmopolitan Barbican area of London.

Properties in the block, which is minutes from fashionable hotspots such as Hoxton Square and Clerkenwell, cost between £500,000 and £10million.

Amenities at The Heron include a 24-hour concierge service, a private residents club, a private garden terrace, a cinema and a gym.

Estate agents Savills market the building as being in a ‘safe’ part of the city.

It states: ‘The Square Mile is quoted as a safe place to live and work by the City of London Government website. The clientele are mainly working professionals therefore crime rates are very low in this area.’

The apartments are bought mainly by city workers, Savills said.