Three Australian best friends have launched a skincare business to help men simplify their regime and understand the benefits behind each product.

Founders Chris Mushan, Nick Mallett and Dougie Joseph, 29, from Sydney, launched Bondi Skin Co in June after noticing a ‘gap in the market’ for men’s skincare products that are effective and clearly outline the purpose.

The business idea began in mid-2019 when the trio were each having difficulty finding skincare that suited their needs, and Nick said he had resorted to using his partner’s products.

‘We thought what currently existed in the market would be somewhat overwhelming to men who are starting to learn more about skincare,’ co-founder and model Dougie told FEMAIL.

He said brands ‘assume men know what they need or what products to use’, but this often isn’t the case.

While developing the brand and working for their full-time positions, the founders created a simple anti-aging serum kit that involves three steps.

Founders Chris Mushan (centre), Nick Mallett (left) and Dougie Joseph (right), 29, from Sydney, launched Bondi Skin Co in June after noticing a ‘gap in the market’ for men’s skincare products that are effective and clearly outline the purpose

All three founders have a background in business and had general knowledge about skincare and the advantages of using certain products.

‘We thought the industry as a whole focused more on women and less on men, which can make it confusing or limiting walking down some store aisles,’ Chris said.

‘We wanted to create a simple routine, not overwhelm customers with choice and provide a three-step guide to what men are after and can use,’ Dougie said.

‘When it comes to skincare, men are largely interested in anti-aging, so we thought of devising the best products to suit this need.’

The founders agreed they focused on formulating serums using high-quality natural ingredients that are ethically made and don’t harm the environment. 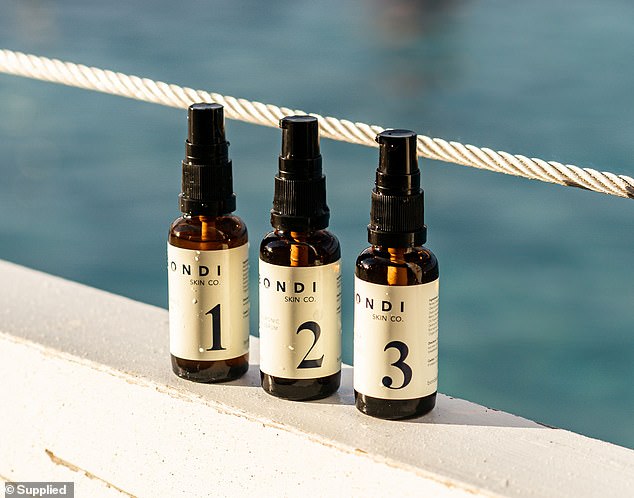 While developing the brand and working for their full-time positions, the founders created a simple anti-aging serum kit that only involves three steps (pictured)

DIFFERENCES BETWEEN MEN’S AND WOMEN’S SKIN

A man’s skin thins gradually with age, whereas a woman’s skin thickness remains constant until about mid 40s – after menopause female skin will thin at a significant rate

Men have a higher collagen density than women, and because of this it is more common for women to show premature age signs faster than men even though they are of the same age

This is also the cause to the difference in facial wrinkling that develops over the years, where men are prone to developing deeper facial wrinkles also associated with subcutaneous fat loss

Problem-prone skin such as breakouts, clogged pores, blackheads and as well as seborrheic dermatitis cases can be more exacerbated and last longer in male skin due to higher sebum levels

Unlike women, for male skin the sebum production remains the same throughout their life and does not decrease with age

Priced at $119.95, the Australian-made kit features three serums that are numbered on the bottles – making it even easier for customers to use.

The serums work powerfully to combat against anti-aging to attain a more youthful, clearer and vibrant looking skin.

The product differentiates itself from others by not only acting as a go-to skincare guide but by using Australian ingredients that aren’t harmful on the skin.

The first step is a Vitamin C serum that, according to the product description, helps defend against sun damage, pollution in the air while also helping to reduce redness, dark spots and fine lines.

The second step is a Hyaluronic Acid Serum, which is a naturally occurring compound in the body that holds moisture and promotes hydration.

The third and final step is a Vitamin A (Retinoid) Serum the boost collagen production to boosts skin cell renewal and helps reduce the appearance of acne, wrinkles and spots.

The first two steps can be used in the morning while the entire kit can be used at night, and it only takes less than two minutes to apply. 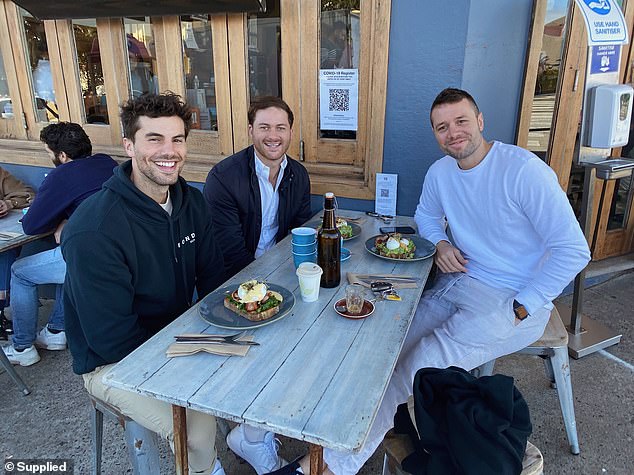 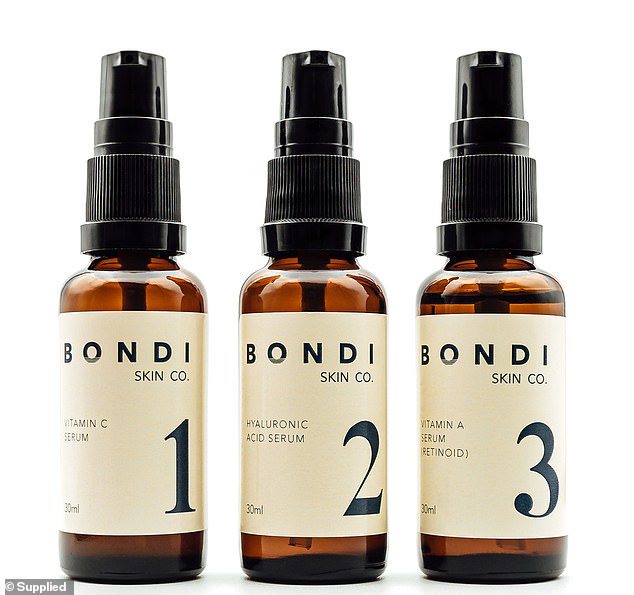 The serums work powerfully to combat against anti-aging to attain a more youthful, clearer and vibrant looking skin

According to the experts at Dermalogica, there are structural differences between a man’s and a woman’s skin.

Due to testosterone stimulation, men’s skin is 25 per cent thicker than women’s skin and is often tougher in texture.

But men have a higher collagen density compared to woman, which indicates their skin seems to age at a slower rate and the appearance of fine lines appear later.

Although UV damage from the sun and other air pollutants can have significant impacts on both men and women.

Vitamin C is a powerful antioxidant that helps defend against damage caused by environmental aggressors such as UV and pollution. Vitamin C can reduce redness, dark spots, and under-eye circles, promoting a healthier overall complexion

Hyaluronic acid is a naturally occurring compound in the body that attracts and holds onto moisture in skin cells, promoting overall skin hydration. It is well known for its benefits, such as alleviating dry skin and reducing the visibility of fine lines and wrinkles

Retinoids are derivatives of vitamin A that help bolsters collagen production and facilitate skin cell renewal. They are known to help reduce the appearance of acne, sun spots, and wrinkles, resulting in a more even, smoother skin tone 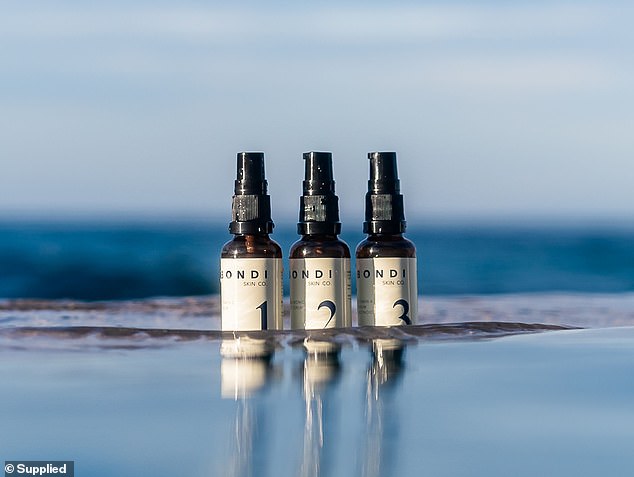 ‘In future as the brand grows we hope to extend the range of products to assist men’s skincare needs,’ co-founder Nick said

Nick said while the brand has only recently launched, they have had a fantastic positive response from customers.

‘In future as the brand grows we hope to extend the range of products to assist other skincare needs for men,’ he said.

So far the kit has received an average of 4.9 stars out of five and can be purchased from the Bondi Skin Co website.