Best (or worst) wedding guests ever? Two friends of the bride take over the dance floor to perform exuberant routine

A hilarious video shows two women dominating the dance floor at a Scottish wedding while an unimpressed bride watches from the corner.

Two women were recorded busting moves and rolling around to ‘Uptown Funk’ at a wedding reception in Partick, Glasgow.

Jamielee Harper and Jayde Tritschler have had viewers in stitches at their wild antics after the clip of them was shared on Facebook.

The two women, who had removed their shoes by this point, danced in circles around each other, throwing themselves onto the floor.

At one point in the clip Jamielee, dressed in a red jumpsuit, is doing the worm whilst her friend, Jayde, who is wearing a blue dress, is on her stomach spinning around in a circle beside her.

Later, Jamie Lee bends backwards over Jayde as she sits on her knees and thrusts upwards.

Jamielee Harper, in red, does the crab while Jayde Tritschler slides underneath in an unusual dance move. The pair sway around like they don’t have a care in the world

Wedding guest, Nicola Mcintyre, 45, posted the footage to Facebook writing: ‘So this happened on Friday night whilst I was at a wedding reception.

If you don’t greet with laughter like I did then there’s something wrong with you.’ The clip has since been viewed nearly 300,000 times.

Martin West commented: ‘That is pure dead brilliant.’ Fiona Donaldson wrote: ‘Fantastic way a wedding should be. Nothing better than not giving a f*** and dancing how you want.’ 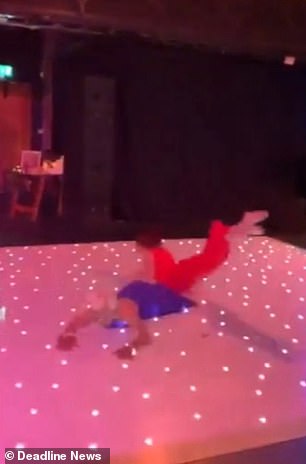 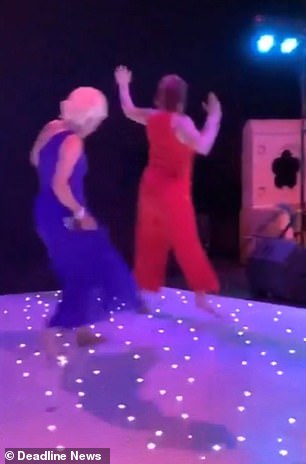 At one point in the clip Jamielee, dressed in red, is doing the worm whilst, Jayde, who is wearing a blue dress, is on her stomach beside her (left) before they jumped up (right)

Suzi McNab added: ‘They’re having fun… but sure need a few dancing lessons.’ Pauline Campbell wrote: ‘No idea who they are but if I ever get married they are 100% invited…’

Speaking today Nicola said: ‘It was my friend’s wedding a week ago which was on Friday 20th September which was held at Cottiers in Partick, Glasgow.

‘So whilst we were all sat down and engaged in some conversation two of the brides best friend’s, Jamielee Harper and Jayde Tritschler, got up on the dance floor and basically danced their asses off.

‘Them doing the worm was the highlight of the night everyone was cheering and laughing haven’t laughed so much in my life if am honest so posted it up on my personal page so I could share it with my friends and family.

‘I am so surprised by the amount of views and shares it has.’