Beto O’Rourke has compared President Donald Trump’s recent campaign event in North Carolina to that of a Nazi rally.

The 2020 Democratic hopeful called Trump a racist during an interview with ABC News on Monday.

‘President Trump is a racist. What we saw in North Carolina last week was almost an impromptu Nuremberg rally,’ O’Rourke said.

He was referring to the president’s rally last week during which Trump supporters repeatedly roared ‘send her back’ as he attacked Congresswoman Ilhan Omar.

He also criticized Trump for previous comments he has made, including that Mexico sends rapists and drugs into the U.S. and that there were fine people on both sides at the far-right rally in Charlottesville, Virginia in 2017.

‘It is in keeping with the president who describes Mexican immigrants as rapists and criminals, who describes asylum-seekers as animals or an infestation, who says that Klansmen are very fine people. It’s very clear the path that he is taking us on,’ O’Rourke said.

He said there would be consequences for members of Congress who don’t take a stand against Trump’s comments. 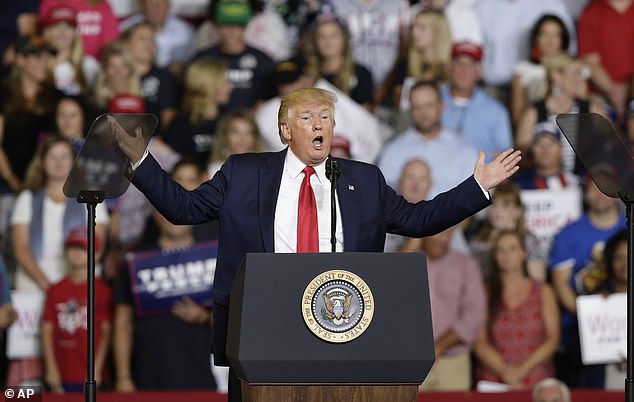 The former Congressman went on to say that his hometown of El Paso, Texas was becoming like Ellis Island – a port of entry for migrants.

Trump has so far refused to apologize for saying that Omar and three other congresswomen should go back to the ‘broken and crime infested’ countries they came from, ignoring the fact they are all American citizens and three were born in the U.S.

The other congresswomen he was referred to are: Alexandria Ocasio-Cortez, Rashida Tlaib and Ayanna Pressley.