Former Texas congressmen and potential presidential candidate Beto O’Rourke is opening his mouth to talk to people who live in the border town of McAllen, while at the dentist.

Beto, who nearly won a senate seat in the mostly red state, and could now be a candidate for the 2020 presidential election, shared the videos Thursday in which he is talking to real life people who are living on the US-Mexico border.

Thus far he has spoken to two women in an effort to dispel the idea that American citizens are under siege by illegal Mexicans rampaging in from Mexico.

‘So, I’m here with Diana, my dental hygienist,’ O’Rourke says to kick off the video he posted on Instagram, where he has 750,000 followers.

The clip shows O’Rourke wearing a protective green bib as Diana cleans his pearly whites with a polishing tool. She says she was born in O’Rourke’s hometown of El Paso, the daughter of a Mexican immigrant.

Smile! McAllen, Texas is a border town that the people Beto O’Rourke has spoken to appear to love, as he aims to dispel the idea that Mexicans are running rampant and illegally crossing at the border

The border is ‘a beautiful community,’ she says in the clip. ‘We all support each other. We love each other, and it’s not what everybody else thinks badly about us.’

President Donald Trump wants a wall along the Mexican border to block illegal immigrants whom he has sought to equate with crime, drugs and gangs.

An impasse with lawmakers over funding for that wall has led to the nearly three-week long shutdown of some government services.

O’Rourke, 46, is among a cadre of fresh-faced US politicians who have become masters of social media in an increasingly digital age.

They include new congresswoman Alexandria Ocasio-Cortez and possible presidential candidate Senator Kamala Harris. Their feeds are part political messaging, part photo-video diary in which an increasingly broad swathe of daily life is shared with followers.

Whether the strategy takes off or backfires has yet to be decided, but O’Rourke’s clip provoked a particular reaction on Twitter: too much information.

Despite the ‘messaging,’ the silly setting drew swift ridicule online. 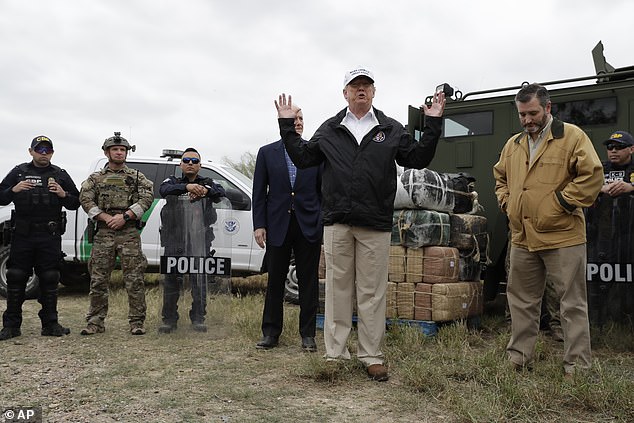 Trump, who has been fighting to get $5.6billion in funding for his border wall with the Democrats, and whose government shutdown has lasted 20 days thus far, visited the US-Mexico border on Thursday (pictured)

‘I’m all for politicians posting their everyday lives on Instagram, but I really didn’t need to see Beto’s dentist appointment,’ tweeted David Bria, chairman of the Young Democrats of Bucks County, Pennsylvania.

Some supporters said the footage served its purpose of boosting O’Rourke’s name in the political discussion, months after his Senate campaign electrified many Democratic voters and put him on the list of viable presidential prospects.

Others called it cringe worthy pandering to social media-minded voters.

And one reporter from The Guardian managed to tweet what many online users were thinking: ‘God I hope Beto O’Rourke doesn’t need a colonoscopy anytime soon.’