Bette Midler has come under fire for a tweet suggesting that African Americans at a President Donald Trump reelection rally were ‘paid’ to be there.

The 73-year-old actress posted the inflammatory comments on Wednesday, in which she also said supporters were in the ‘blackground’.

The tweet was criticized online with one user, Heather Champion, stating that her message assumes ‘black men cannot think for themselves but are willing to be bribed’.

Champion added that Midler, who has 1.7 million followers on the social media platform, was the ‘definition of a racist’.

The Hocus Pocus star did not elaborate on her comments apart from responding to one message about her use of expletives in other tweets.

Bette Midler accused African American supporters of President Trump of being ‘paid’ to be there in a Tweet on Wednesday, in which she also dubbed them in the “blackground” 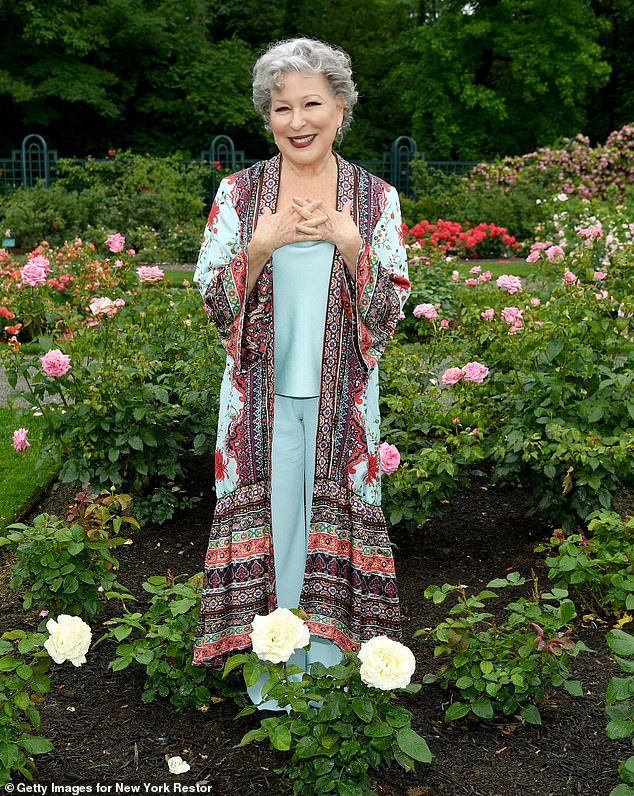 The 73-year-old actress, who starred in Hocus Pocus, has not elaborated on her comments other than to justify her use of expletives in other tweets 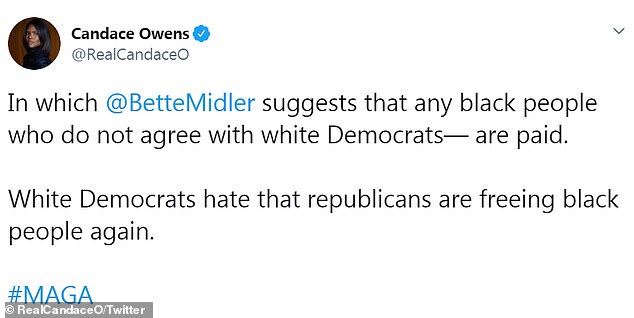 ‘Oh, Robby my boy. You must’ve been watching with #BigotBette @BetteMidler. Those who scream the loudest (and drop the most F-bombs)…..’ Twitter user Shirl wrote.

‘As many as I feel like! Personally, I enjoy swearing. Why don’t you try it, you uptight…..ha!’ Midler replied.

The initial tweet by Midler, which had received more than 1,800 retweets and over 5,600 likes on Thursday, continued to spark controversy online.

Activist Candace Owens wrote that the actress ‘hates everyone’ and accused her of having a ‘breakdown’.

‘Really, Bette? REALLY?’ recording artist Joy Villa wrote. ‘You’re this crazy to insinuate black Americans have absolutely no mind or values of their own & would only support their country & @realdonaldtrump for ‘money’? SMH you probably think they’re all pimps & black women like me are just h***, too?’

Actor Terence K. Williams also accused Midler of racism, writing: ‘[Trump] did not pay any black people to support him! We can think for ourselves. I never received a checked!’

‘That’s some racist c*** right there,’ another wrote according to Page Six. ‘I guess an old, white woman like yourself gets to decide what and how black people should believe and vote.’

Double O-X added: ‘I’m so sorry that you are this uneducated. Let me know if I can help you in any way.’ 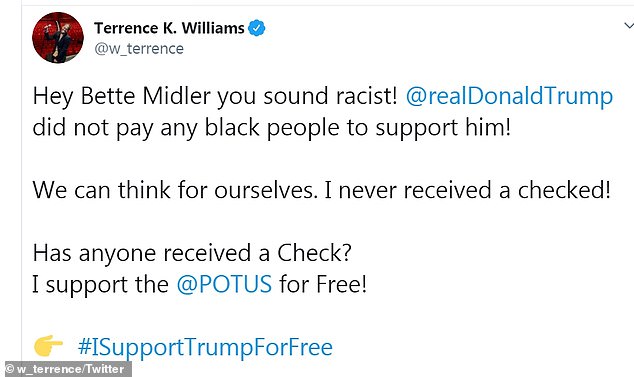 Actor and comedian Terrence K. Williams fired back that he supports President Trump and has never been paid 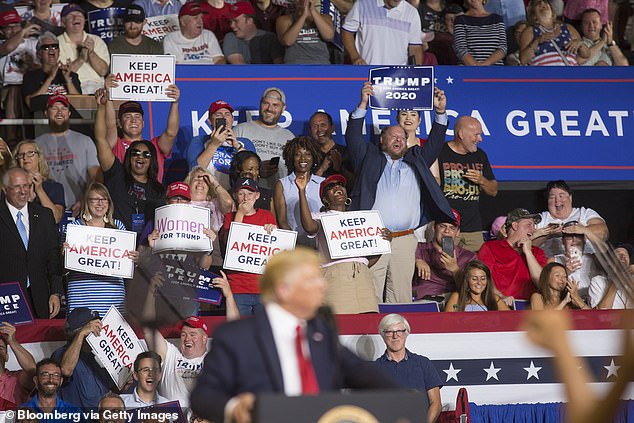 Trump reelection campaign supporters at a rally in Greenville, North Carolina, last week. He is yet to respond to Midler but in a previous spat accused her of being a ‘washed up psycho’

‘HE SOLD OUT HIS COUNTRY FOR A BUILDING IN MOSCOW. Take that in, America. Let it sink in, that you have elected a mobster who doesn’t give a flying f*** about you,’ she wrote.

Trump is yet to respond to Midler, who also retweeted a false quote about the President last month about Republicans being the ‘dumbest group of voters.’

She apologized the next morning but stated there are ‘SO MANY LIES… generated by Trump’ that distinguishing the difference was ‘impossible.

In response to her tirade the President called her a ‘washed up psycho’ and a ‘sick scammer.’

One user known as ‘Shirl’ critiqued Midler’s use of expletives and called her out, this was the only tweet Midler replied to

Vincent Charles’ tweet was one of many critiquing the actress

Another user vented about Midler’s lack of education

One user sided with Midler, tweeting ‘We’re just sorry we didn’t think of it first’