There could hardly be a television show more emblematic of everything Nineties; when Beverly Hills, 90210 debuted on Fox in 1990, the series had it all – a beautiful cast, dramatic plot twists, cutting-edge style and tantalizing behind-the-scenes gossip. Audiences around the world couldn’t get enough of the show as it morphed into a pop culture sensation, its stars and storylines dominating headlines for a decade.

And now the series looks set to be returning, much to the delight of its legions of adoring (and ageing) fans; the original cast gathered together in a coffee shop this week in Beverly Hills – of course – to discuss reuniting for a new project. Ian Ziering, Tori Spelling, Jennie Garth, and Brian Austin Green were all spotted in a meeting with producers on Sunset Boulevard, though conspicuously absent was its most infamous star, Shannen Doherty.

Although 90210 got off to a lacklustre start, it then gripped the imaginations of teenagers and pushed boundaries with plot lines featuring everything from AIDS to rape. The hairstyles and fashions were trend-setting during its run, and the series was a must-see for American teens as well as global audiences; in later interviews reflecting on the show’s popularity, the male stars fondly recalled getting mobbed in Europe by adoring fans. 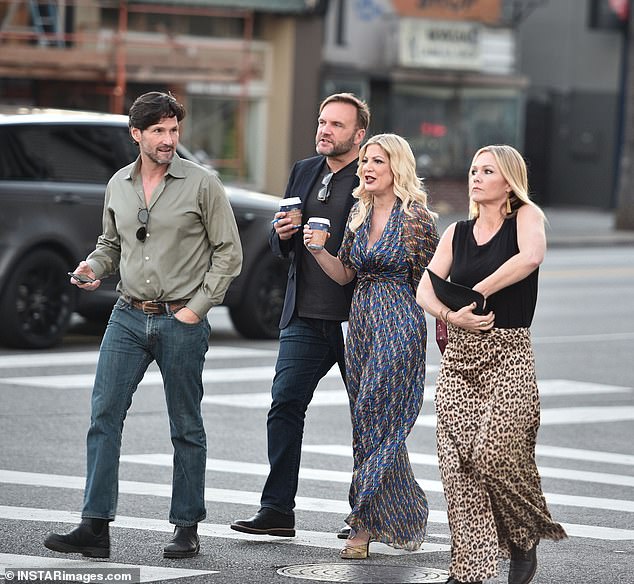 Advanced plans: The foursome met up with producers Mike Chessler and Chris Alberghini 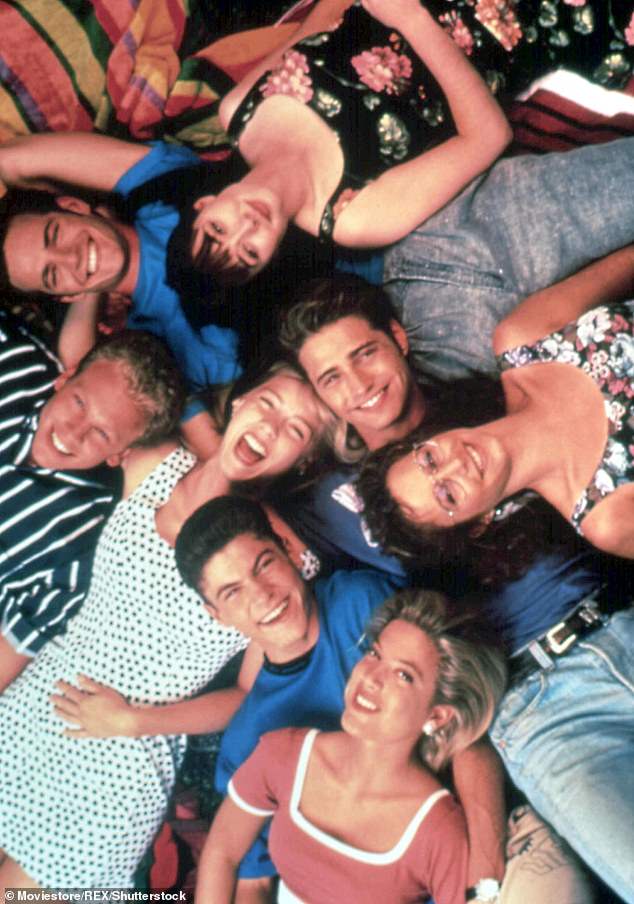 Iconic: The show was a pop culture phenomenon 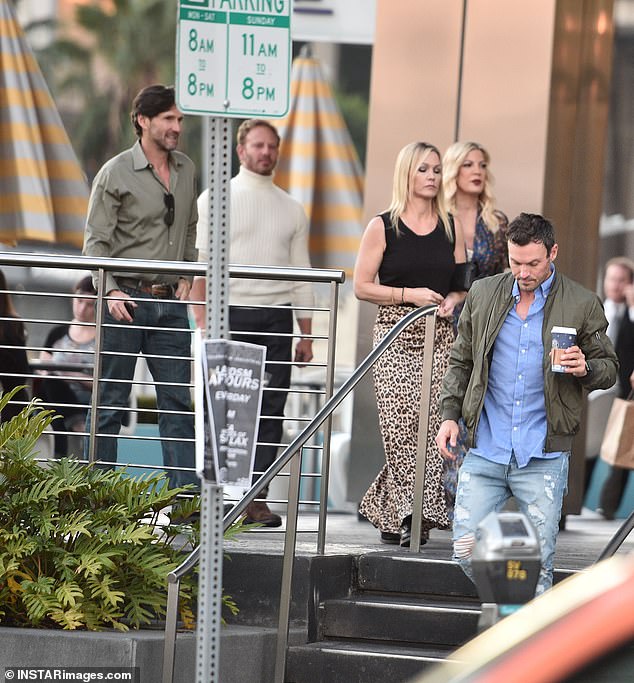 New year, new project: While their high school days are far behind them, the group are in advanced talks to return the show to the small screen, nearly 30 years after it debuted and became a world wide sensation

But perhaps the series was best known for the infighting and dramas that gripped the cast in real life, particularly whipped up by Doherty. Her moralistic character earned a ‘Brenda Backlash’ and sparked the ire of viewers – including an anti-fan club – while her bad off-screen behaviour stoked the disdain further. Journalist Diana E. Lundin, writing for the Los Angeles Daily News in 1993, described Doherty as being ‘seen by many as an increasingly abrasive actress who breathes life into Brenda Walsh, the increasingly petulant female half of the Walsh twins.’

Doherty and Garth were engaged in a well-documented feud that at one point allegedly escalated into physical violence; Garth has admitted that the pair ‘often wanted to claw each other’s eyes out.’ On top of that, Doherty was known for lateness, diva demands, selfishness and hardcore partying. During one 1992 nighttime incident, she was cited for misdemeanour battery after fighting with another woman at a Hollywood club; she was also taken to court a month later by United Bank in California for $36,000 amid claims she bounced 70 checks. A year later, she was written off the show.

Beverly Hills 90210 continued on without her, airing its last episode in 2000 and later inspiring a new incarnation of the series, titled simply 90210, which debuted in 2008. Lifetime in 2015 aired The Unauthorized Beverly Hills 90210 Story, which showed how Doherty got into a catfight with Garth, crashed Ziering’s car and enraged fellow cast members so much that they clamoured for her to be kicked off the show.

While Doherty went on to star in Charmed – where her bad behaviour allegedly continued and she again left acrimoniously – her 90210 co-stars continued their own careers with various degrees of success. 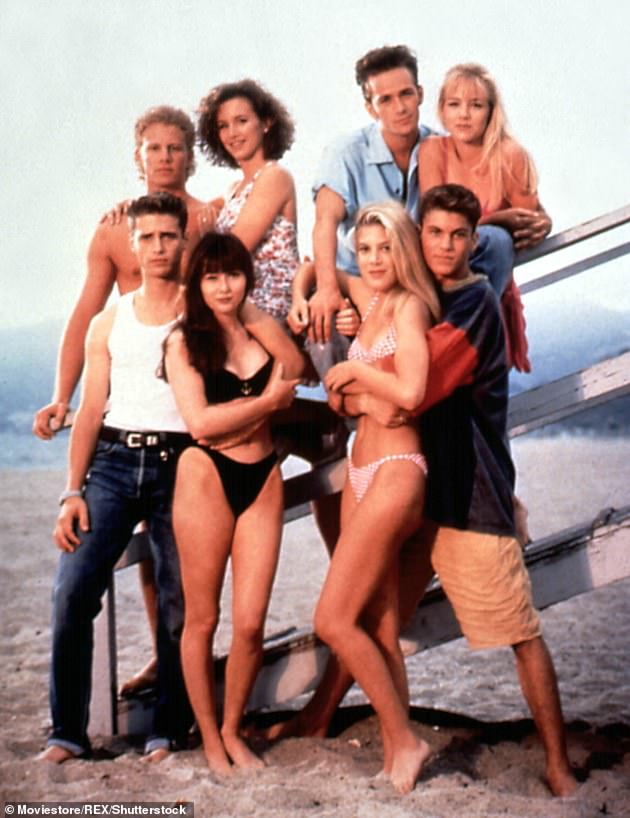 Throwback! The teen soap centered on West Beverly Hills High School students ran for 10 seasons spanning 1990-2000, and spawned three spin- offs as well as a reimagining on The CW in 2008 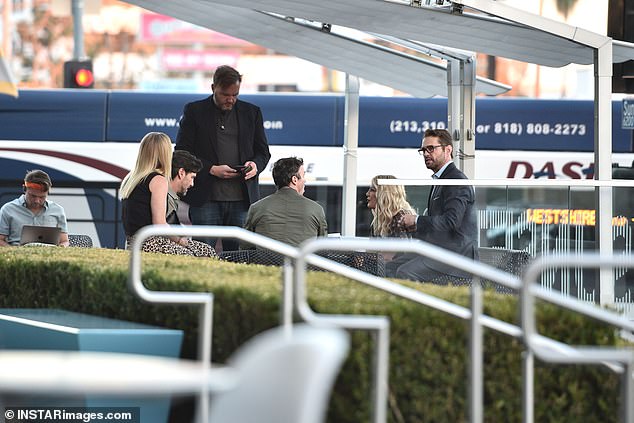 Future plans: They are said to be working on the reboot with CBS Television Studios, who is shopping the potential show to multiple outlets amid much interest

Garth, now 46, continued acting, appearing in spin-offs 90210 and Melrose Place as well as co-starring with Amanda Bynes in four seasons of WB sitcom What I Like About You. In addition to other acting roles, she appeared on Dancing With the Stars in 2007, reaching the semi-finals with partner Derek Hough. In 2014, she starred in HGTV’s the Jennie Garth Project, turning her talents to remodelling as she gutted and renovated the Hollywood home she shared with her children. Garth has three daughters and has been married and divorced three times.

Spelling, similarly, has had a tumultuous personal life since the glory days of 90210. Now 45, the Beverly Hills native has been married twice, most recently to Dean McDermott, who had a wife at the time the pair met and began an affair. The couple have five children and have starred in a variety shows, and Spelling has written three books. The death of her father in 2006 provided significant tabloid father, however; she was estranged from her mother, the executor of his $500estate, and the 90210 star’s subsequent financial troubles have been well documented. She’s had various acting roles over the years and is currently hosting makeover series The Look All Stars.

And in keeping with the reality show career of former 90210 stars, Ian Ziering has appeared on his share of such projects. He made it to the semi-finals of Season Four of Dancing With The Stars, appeared on NBC’s Celebrity Apprentice in 2015 and earlier this year competed in World Cooks in America: Celebrity Edition – in addition to appearing in guest roles on TV shows such as JAG. Now 54, Ziering and his second wife have two daughters.

Priestley also continued acting with a variety of roles on stage and television, and he was inducted into the Canadian Hall of fame two years ago. Separately, for years he has indulged his passion for race-car driving –a passion which resulted in serious injury in 2002, when he crashed during a practice run at the Kentucky Speedway while traveling nearly 180 miles per hour. He has also turned his hand to directing, and Priestley shares two daughters with his wife. He currently stars as Matt Shade in the series Private Eyes. 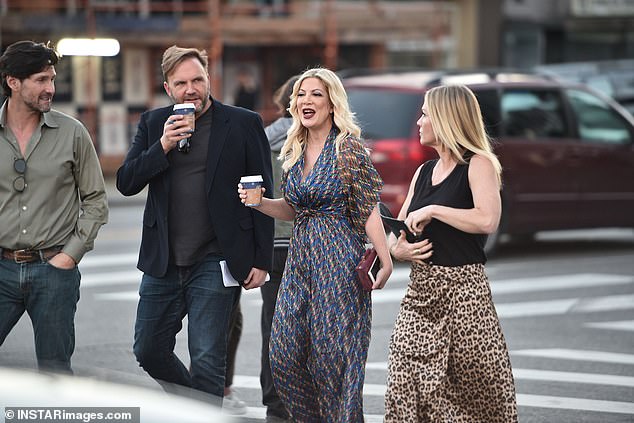 Ready to return: Running on Fox from 1990 to 2000, the show made instant stars of the cast, who have since had varying success in the world of showbusiness 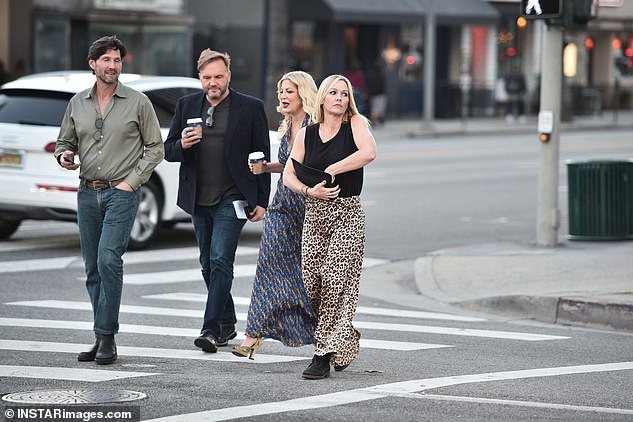 Back to 90210: The group were on their old stomping ground of Beverly Hills 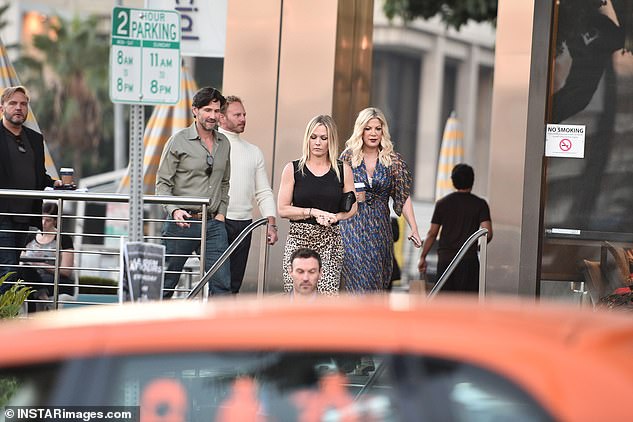 Turning back the clock: Deadline report that current SAG-AFTRA President Gabrielle Carteris is interested in reprising her role as brainy Andrea Zuckerman on the reboot

Perry, too, is currently starring in a popular network show, playing Fred Andrews in the CW series Riverdale. Before that, he appeared on Garth’s show What I Like About You and made various other TV guest appearances, in addition to starring in projects such as a Killers music video and stage productions. He shares two children with his ex-wife

And Brian Austin Green has perhaps the most famous wife of the group: He married Transformers actress Megan Fox in 2010, and the couple have three children. He also has a teenage son, Kassius, from a previous relationship with Bevely Hills, 90210 actress Vanessa Marcil – who took to social media last month to allege that Austin Green barely sees the boy. Marcil claimed that her ex and his wife ‘decided to completely cut off Kass out of their lives and his younger brothers’ lives’ – adding that Kassius was ‘truly heartbroken.’ In his professional life, Austin Green has had various acting roles over the years and in 2017 began hosting a podcast.

He was among the 90210 reunion group spotted meeting this week, along with Ziering, Spelling and Garth. They took over an outside spot at the Coffee Bean on the busy Sunset Boulevard, causing tourists to do a double take as they walked by. The show is already in an advanced stage of planning, with Deadline reporting it is being shopped around by CBS Television Studios to streaming services and traditional broadcast networks, attracting much interest.

Talk of a remake was first sparked back in March when Spelling alluded to a reboot on social media. In a March 9 Instagram post, she said: ‘Great creative day yesterday with my #partnerincrime!’  The blonde gal pals have been pictured hanging around CBS Studio Center several times, including ‘taking bestie selfies’ on the lot’s official golf carts. 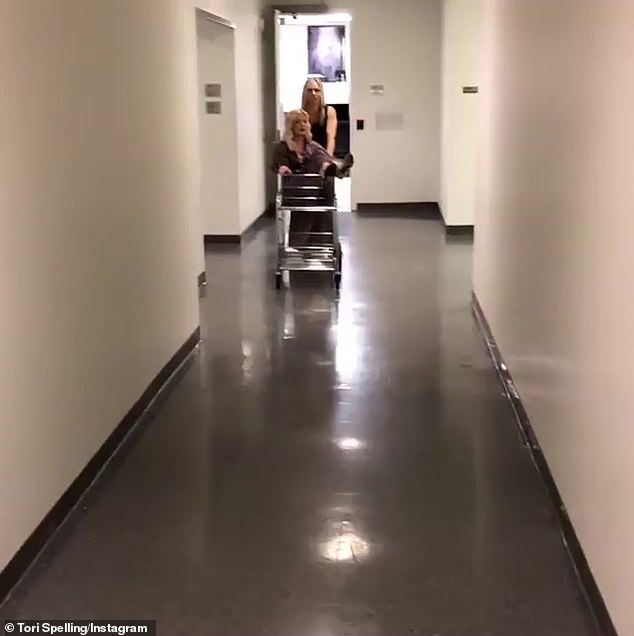 Rolling through! Tori and Jennie reunited in LA on Thursday with their fellow Beverly Hills, 90210 castmates for a scripted reboot pitch meeting 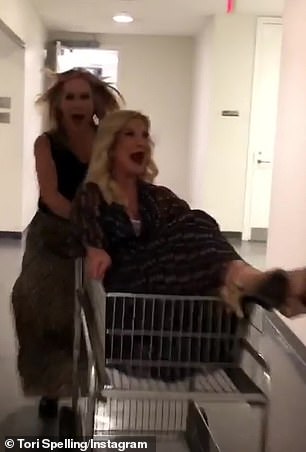 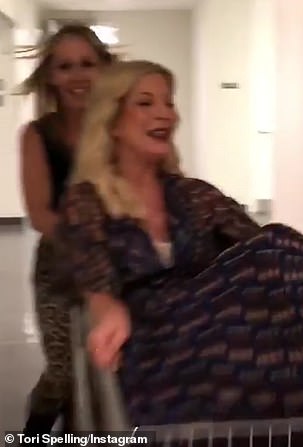 Weee! 45-year-old Tori (R, who played Donna Martin) shared a silly video of 46-year-old Jennie (L, who played Kelly Taylor) pushing her through an office hallway in a mail cart 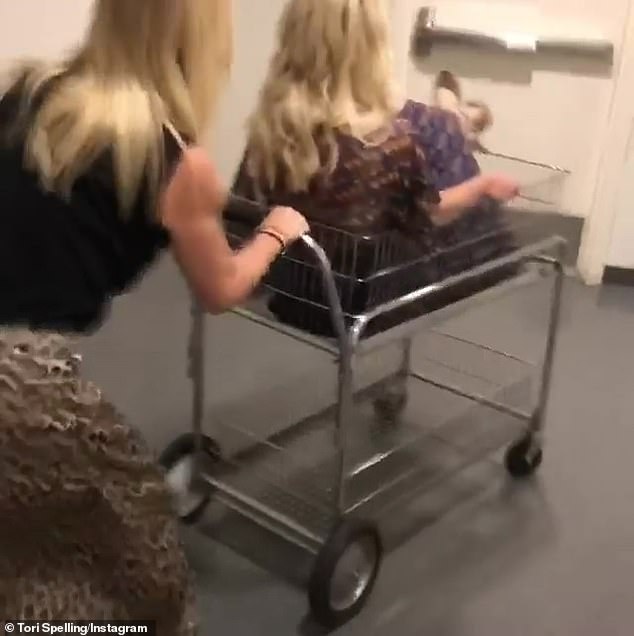 The daughter of 90210 producer Aaron Spelling gushed earlier this month: ‘I get to work with my best friend’

Nowhere to be seen was Perry or Doherty, with the actress separately posted an Instagram story of herself in the makeup chair for a mystery project with the caption ‘Back at it.’ Doherty, now 47 and on her third marriage, has fought a highly public battle with breast cancer after being diagnosed in 2015; she underwent a mastectomy, chemotherapy and radiation, and in April 2017, she announced that her cancer was in remission. ‘Cancer, for me, as hard as it is, has been a blessing,’ she told Us Weekly the month before the announcement. ‘It has changed who I am as a human being forever. It’s altered my life in ways I can’t even speak of.’

Whether her future will include a Beverly Hills, 90210 reboot remains to be seen, but her former co-stars seem eager and positive, nearly 30 years after the show first aired. Their characters and the plot will doubtlessly have matured, but if Garth is one to go by, the cast will be absolutely fine with that. Their audience, of course, will have grown with them.

‘I’ve reached a point in my career where I’m not one of the kids, and I have to remind myself how happy I am to be past that – to not be the one that’s out in the ocean, skinny dipping at midnight,’ she said in 2008, as spin-off 90210 launched. ‘I’m very, very happy to be the older lady.’ 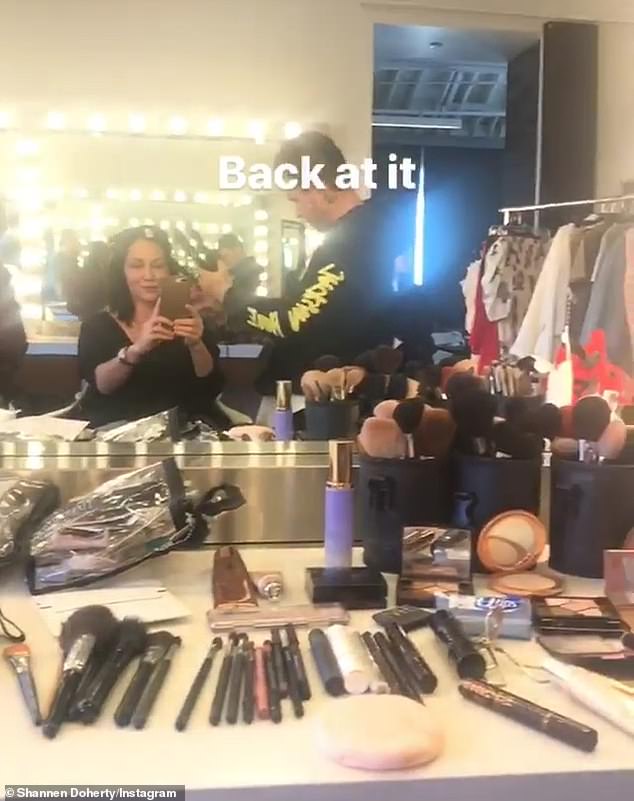 ‘Back at it!’ As for Shannen Doherty (who played Brenda Walsh), the 47-year-old breast cancer survivor Insta-storied a video of herself in the make-up chair of a mystery project