Beware the equity release exit fee trap: Homeowners hit with charges of up to £23,000

Christine Williams had never planned to sell her family home, but after separating from her husband she had no choice.

It was particularly bad timing, too, because Christine, 68, had taken out a £25,000 equity release loan against the property to pay for home improvements two years earlier.

This meant that before she could sell her home, she would have to repay the loan plus interest and an early-repayment charge.

Christine called her provider, Aviva, for a settlement figure and was told she owed £32,133.

When Christine called Aviva for an explanation, she was sent a three-page, jargon-filled document which referred to ‘gilt movements’.

Christine, a retired insurance claims officer, says: ‘It was so confusing and did not help me understand why the fee had gone up by £1,800 in 18 days.’

It turned out that Christine had fallen foul of a catch with equity release deals.

Equity release loans have become increasingly popular among over-55s who are property-rich but cash-poor.

Borrowers can release money from their home and do not have to make monthly interest repayments. Instead, the interest is rolled up over the years until the homeowner goes into long-term care or dies.

However, if you have to sell your home early owing to unforeseen circumstances (such as needing to downsize to a specially adapted house) or want to switch to a cheaper deal, you typically have to pay a hefty early repayment fee — and these charges can vary hugely from one day to the next.

Money Mail research shows that in the worst cases, exit fees on the same deal can range from £125 to an astonishing £23,095 depending on when you repay the loan.

How much you pay all boils down to how your lender calculates its exit fees.

Some firms charge a fixed fee, which is calculated as a percentage of the loan. Often, these fees reduce over time.

For example, a lender may charge 5 per cent of the original loan during the first five years, and then 3 per cent thereafter.

However, others, including Aviva and Legal & General, charge a variable exit fee which can work out significantly more expensive.

The way they are calculated is also impossibly complicated, making it difficult for customers to understand the charges. 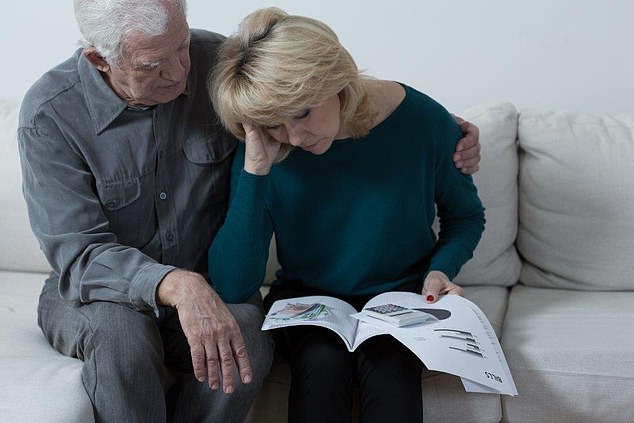 The loans have proved popular among over-55s who are property-rich but cash-poor. But some homeowners suddenly need to sell due to unforseen circumstances

If rates fall, the lender will hike its early repayment fee. And as these rates vary from day to day, it means that borrowers cannot know for sure how much their exit fees will cost until the day they repay the loan.

The only guarantee is that the penalty cannot exceed more than 25 per cent of the initial loan.

But research compiled by Money Mail shows how borrowers could end up paying a whopping 184 times more on one day compared to another.

If they took out a £100,000 Lifestyle Flexible Option equity release loan with Aviva at an interest rate of 3.71 per cent, they would have to pay a £15,973 if the index fell by 1 per cent. But if it stays the same there is no charge.

By comparison, a borrower with a fixed exit penalty deal would pay £5,343 with More2Life’s Capital Choice equity release loan at 4.28 per cent.

Dean Mirfin, chief product officer at Key, a financial services group for those both in and approaching their retirement, says advisers can keep gilt rates under review and tell borrowers when it is a good time to repay.

Gilt rates typically rise if the economic outlook is rosy and there is an expectation that the Bank of England will increase interest rates. But they may fall if global investors feel the UK government is not a safe bet.

But not everyone is able to wait until the penalty has come down. And consumer experts say lenders should not be allowed to penalise people who need to exit their deal early for reasons beyond their control.

James Daley, of campaign group Fairer Finance, says: ‘As is so often the case, the product has been designed to protect the lender first and foremost and not the consumer’s needs and how they might change. I don’t see how fees of up to 25 per cent can be justified. The regulators should be looking at this.’

A spokesman for Aviva says: ‘We use a method based on UK government bonds (gilts) because they are impartial, transparent and customers will not always have to pay an early repayment charge.’

A spokesman for Legal & General says: ‘There are pros and cons with both methods of calculating early repayment charges and you should speak to your financial adviser about your needs and plans in retirement.’