They have had an incredible 2018 which included their highly-successful On the Run II Tour, filling stadiums across the world.

But Beyonce and Jay-Z chose to spend their Christmas in a more low-key manner, spending their time with their loved ones and ringing in the festive break with a family trip to Prospect Park in Brooklyn, New York on Christmas Eve.

The outing was to honour Jay Z’s grandmother Hattie White as they presented her with her own bench in the park, with the music mogul being joined by wife Beyonce and their children; Blue Ivy, six, and their 18-month-old twins Rumi and Sir.

Family first: Beyonce and Jay-Z spent Christmas Day at a park in New York City with loved ones on Tuesday 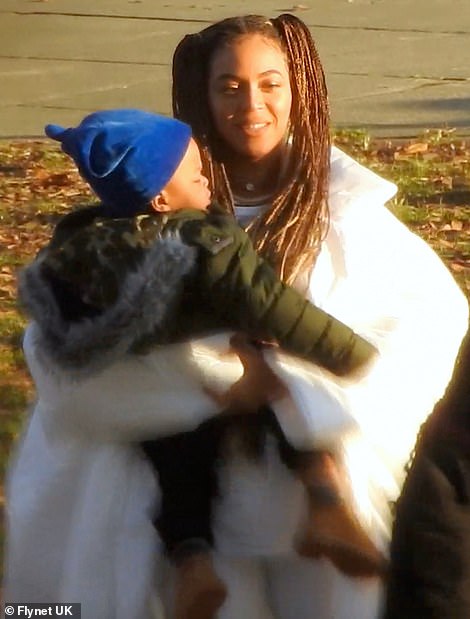 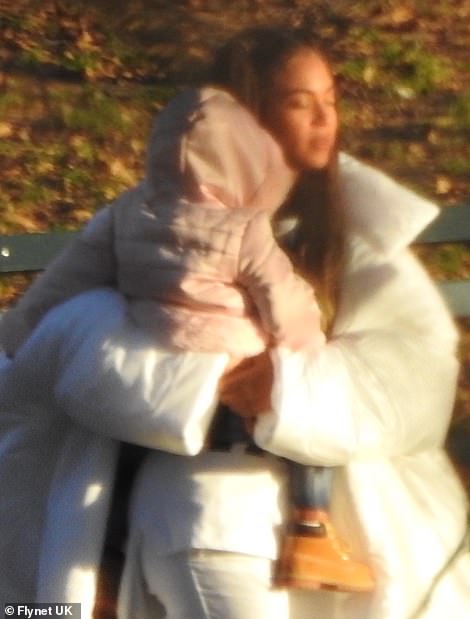 Adorable: The 37-year-old Drunk In Love hitmaker was spotted cuddling with 18-month-old twins Rumi and Sir

Drunk In Love hit-maker Beyonce, 37, was seen cuddling the couple’s youngest children in her arms during their festive visit.

Alongside her Jay Z (real name Shawn Carter) appeared emotional as The Carters came together to share their thoughtful present with the rapper’s grandmother Hattie – dedicating a bench to her in her name.

There was a touching inscription on the long seat which read:  ‘Someone is sitting in the shade today because someone planted a tree a long time ago. With Love and Admiration to our root, Hattie White.’ 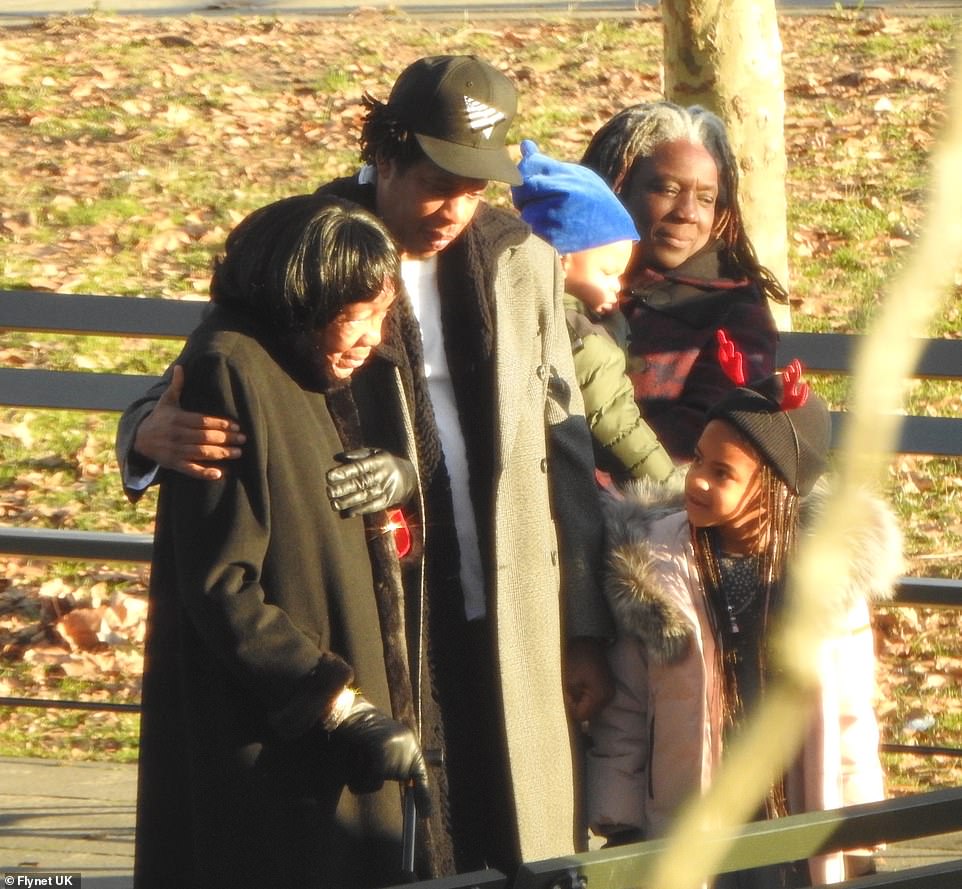 Aww: The power couple were there to show the 49-year-old mogul’s grandmother, Hattie White, the thoughtful present they had given her which was a bench at Brooklyn’s Prospect Park dedicated in her name, Jay was also joined by eldest daughter Blue Ivy (pictured right) 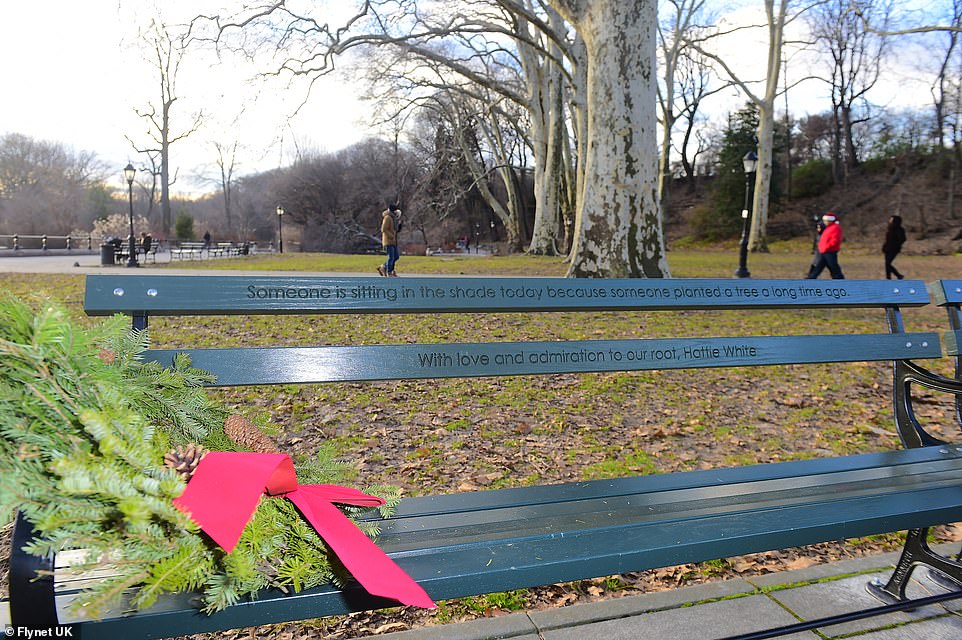 Great gesture: There was a touching inscription on the long seat which read: ‘Someone is sitting in the shade today because someone planted a tree a long time ago. With Love and Admiration to our root, Hattie White’ 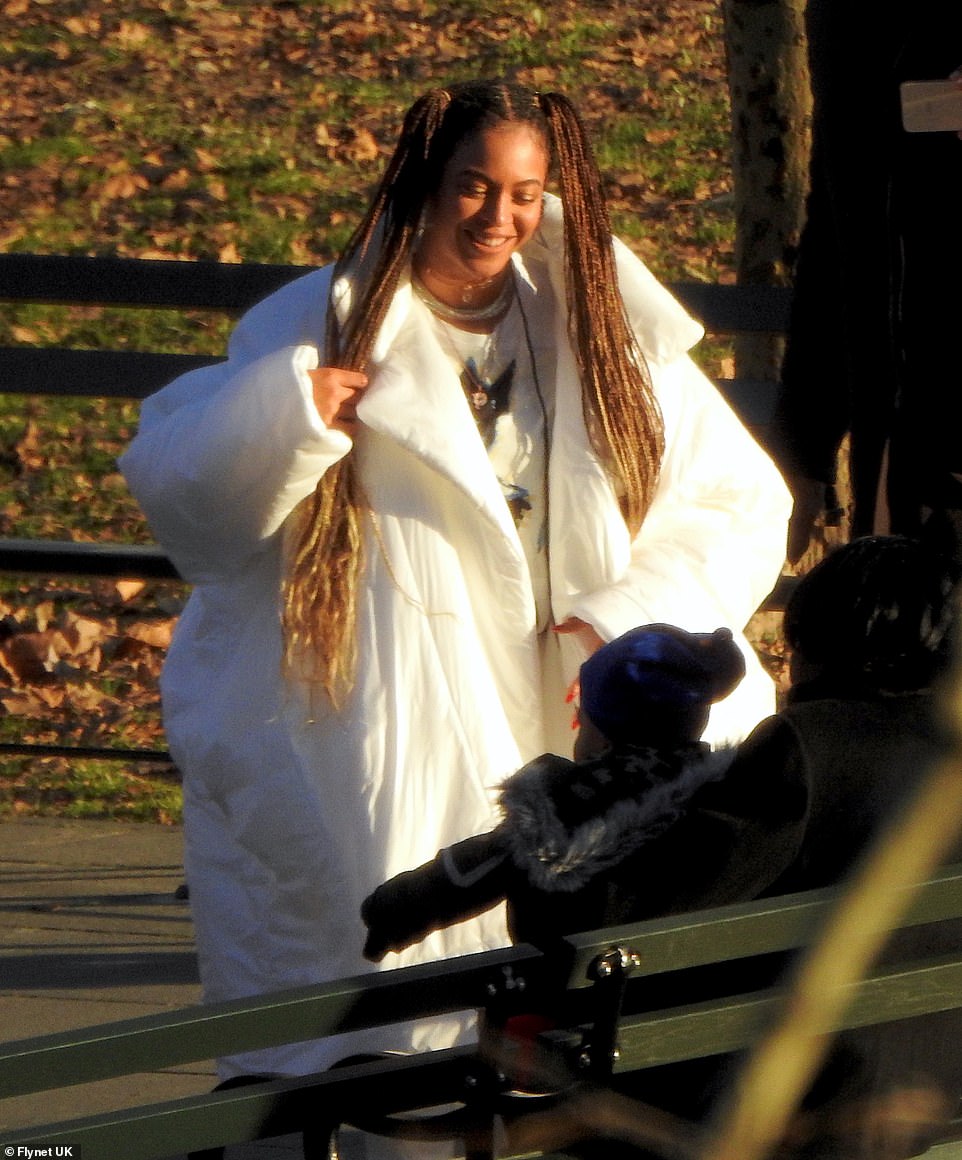 Vibes: Beyonce looked fashionable as always in all-white including huge coat with trousers and matching shoes

Style icon: Her braided locks were parted down the middle and put in to side-ponytails as they draped over her shoulder

Jay-Z’s grandmother seemed touched by the gesture as she stood in front of the bench holding a hand to her heart, as the 99 Problems star wrapped his arm around her.

Little Blue, meanwhile, was seen looking sweetly at her great grandmother, as she wrapped up warm in a pale pink quilted jacket and black beanie hat that she teamed with a festive pair of reindeer ears.

Beyonce’s braided locks were parted in the middle and styled into two ponytails that fell past her shoulders. 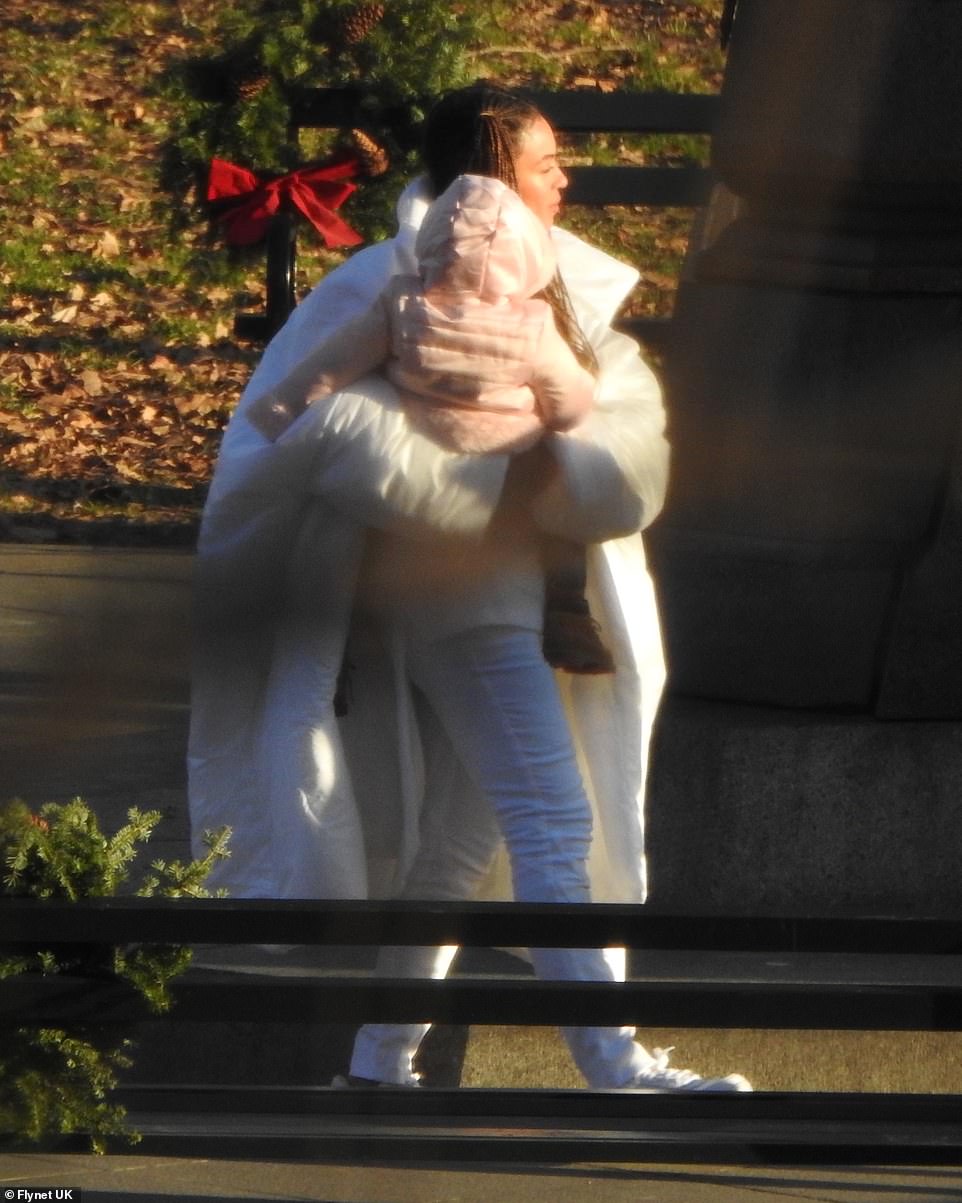 Stepping out: Beyonce looked more than happy to bond with her baby girl 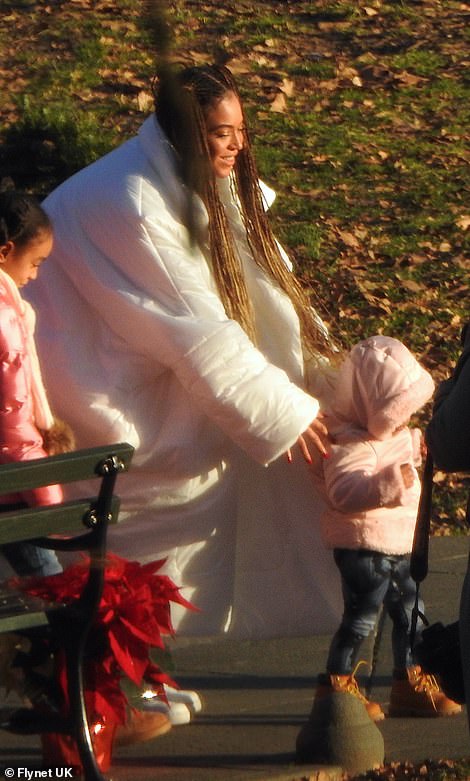 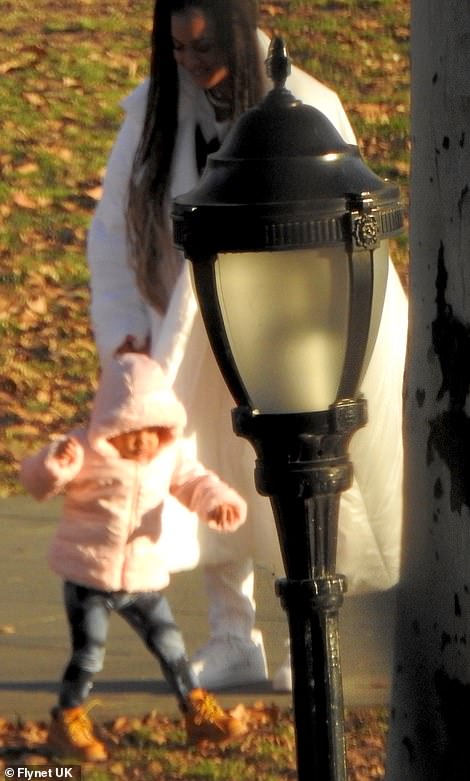 Bonding time: Beyonce let Rumi run on her own as she chased after her 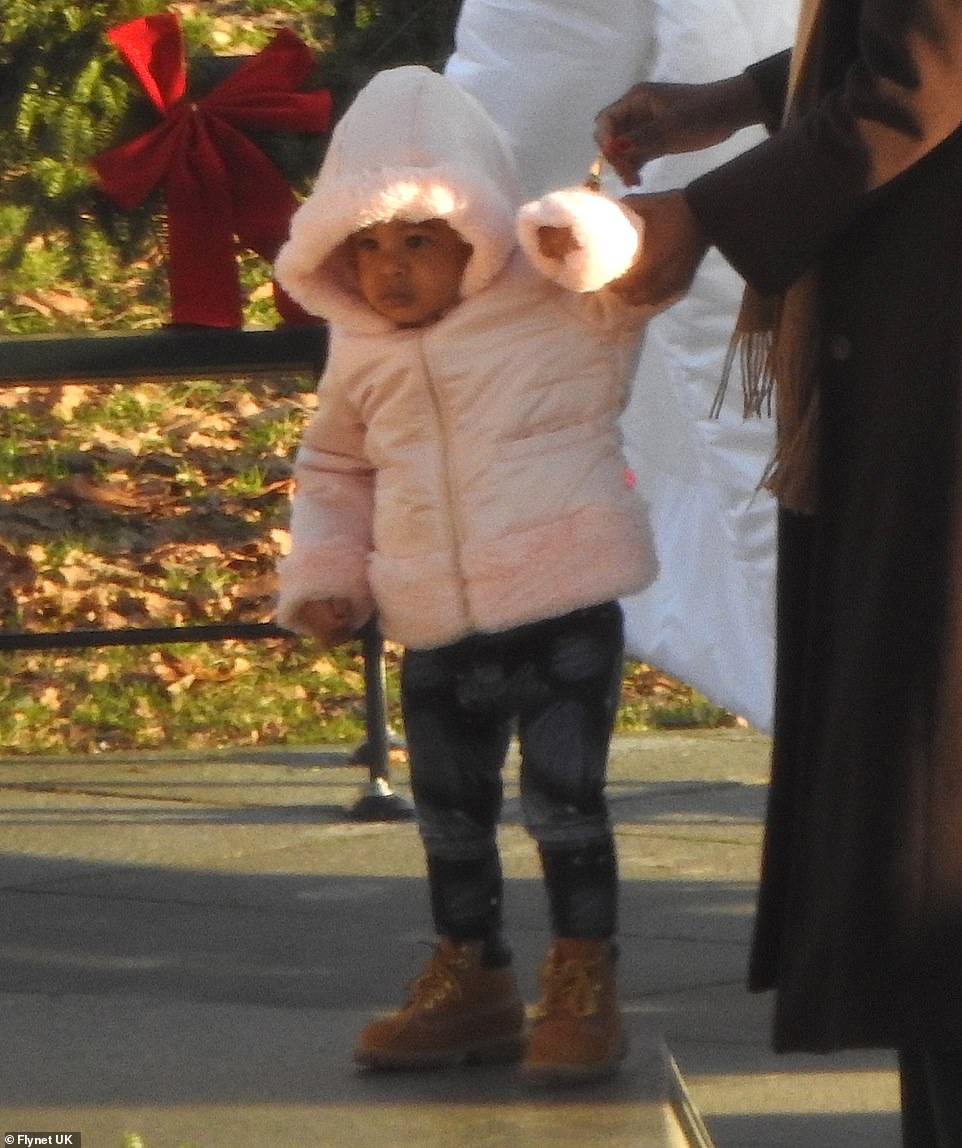 Cute: The youngster bundled up in a pink coat with patterned leggings and brown Timberland boots

The global superstar certainly looked in the Christmas spirit as she joined her family out in NYC, flashing a big smile on her face throughout much of the outing as they marked the special occasion.

She was seen doting on her brood during their time at the park and was spotted cradling her twin children in her arms.

Making sure they were wrapped up from the chillier temperatures, Beyonce sweetly dressed Rumi and Sir in similar ensembles. While Rumi was clad in jeans, mini Timberland boots and a pink winter coat to match her older sister Blue, Sir was seen sporting a khaki-green coat in a matching style and cobalt blue beanie hat.

Beyonce has previously spoken about motherhood and revealed to American Vogue last year, that she now ‘really understands’ her body after experiencing childbirth. 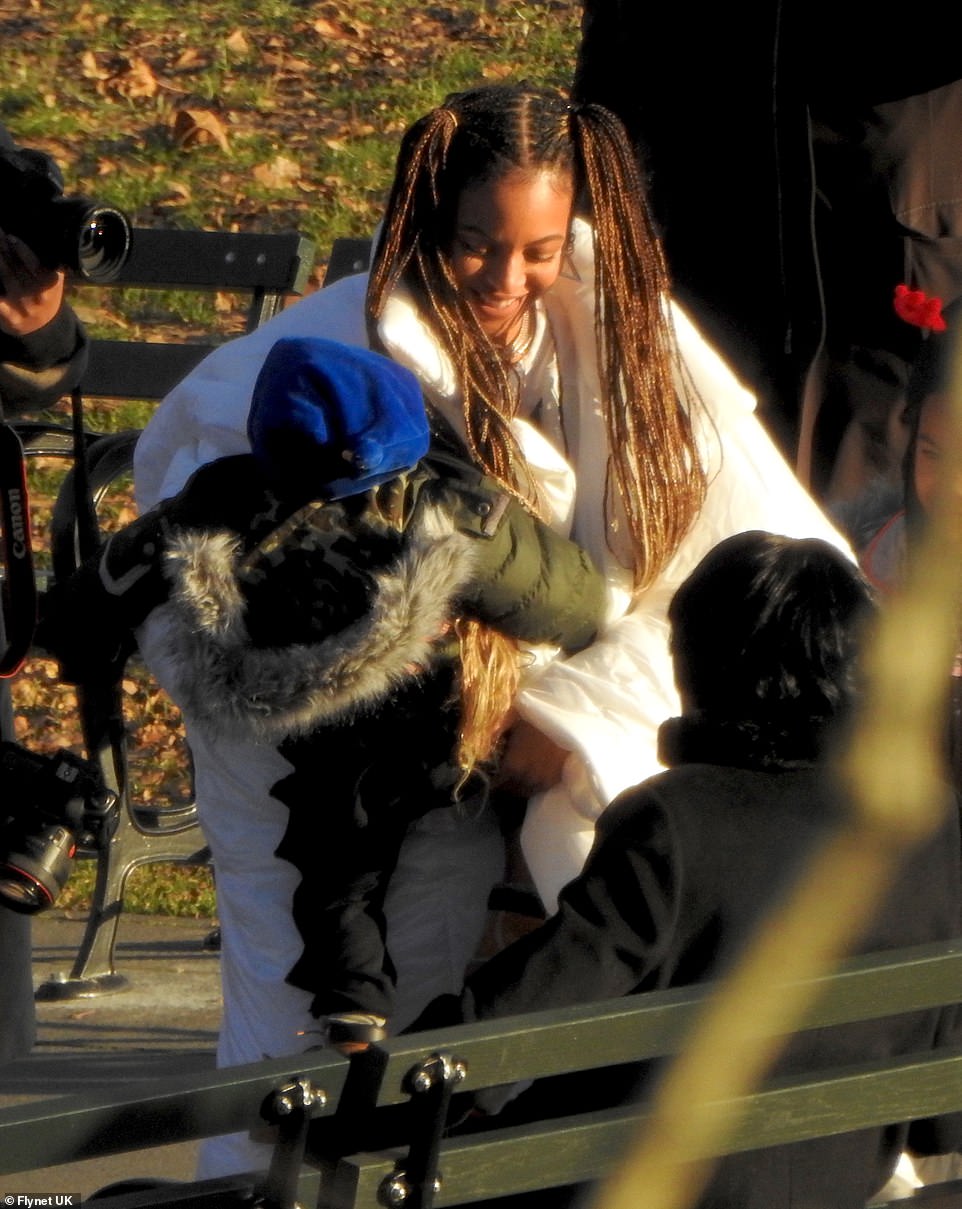 Twinkle in her eye: Beyonce also got plenty of face time with son Sir as she grinned from ear-to-ear while carrying him

Star of the show: No doubt all eyes were on Beyonce during the family outing 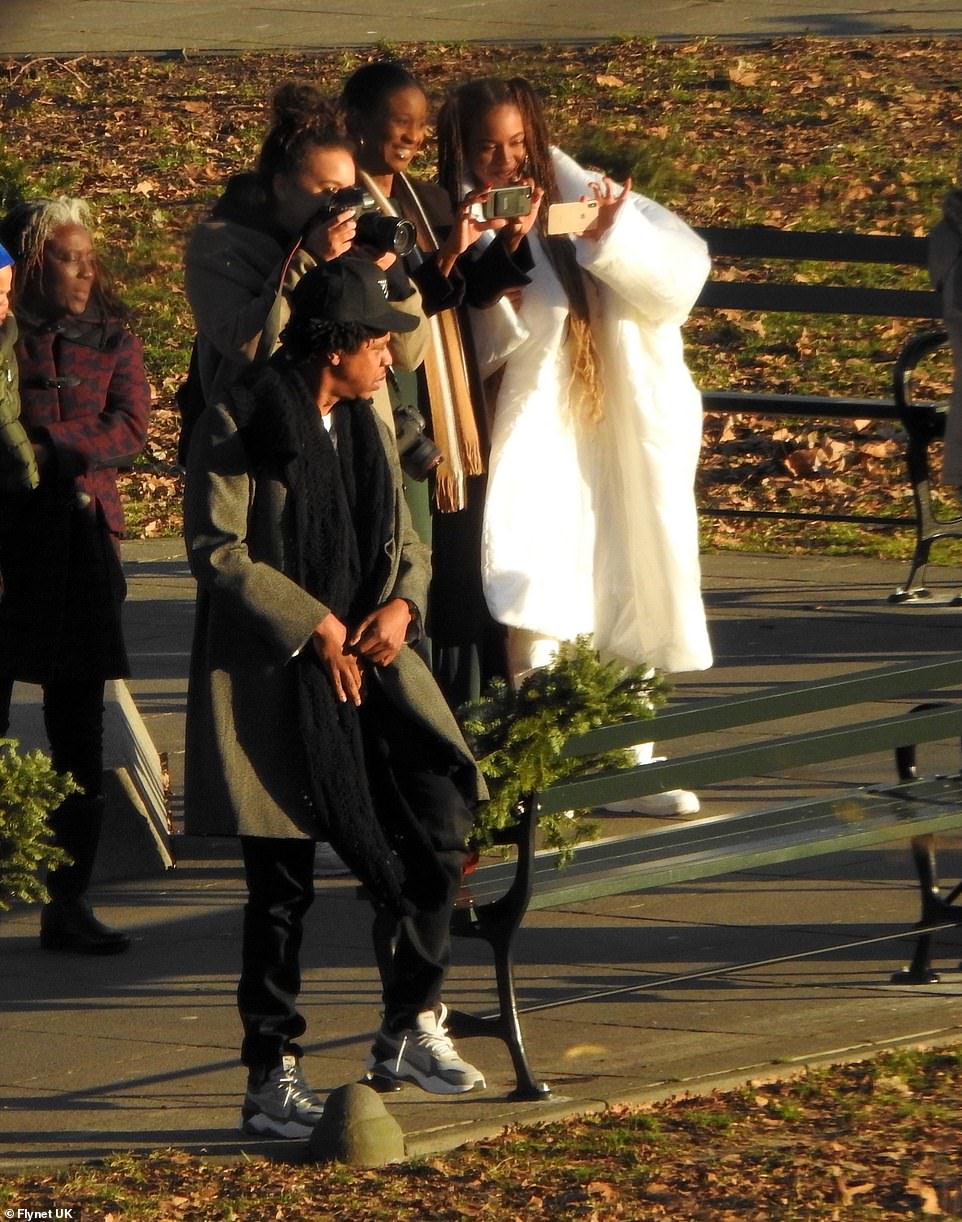 Chill: Jay looked Big Apple cool in a grey coat with a fur-lined collar over jeans and grey sneakers 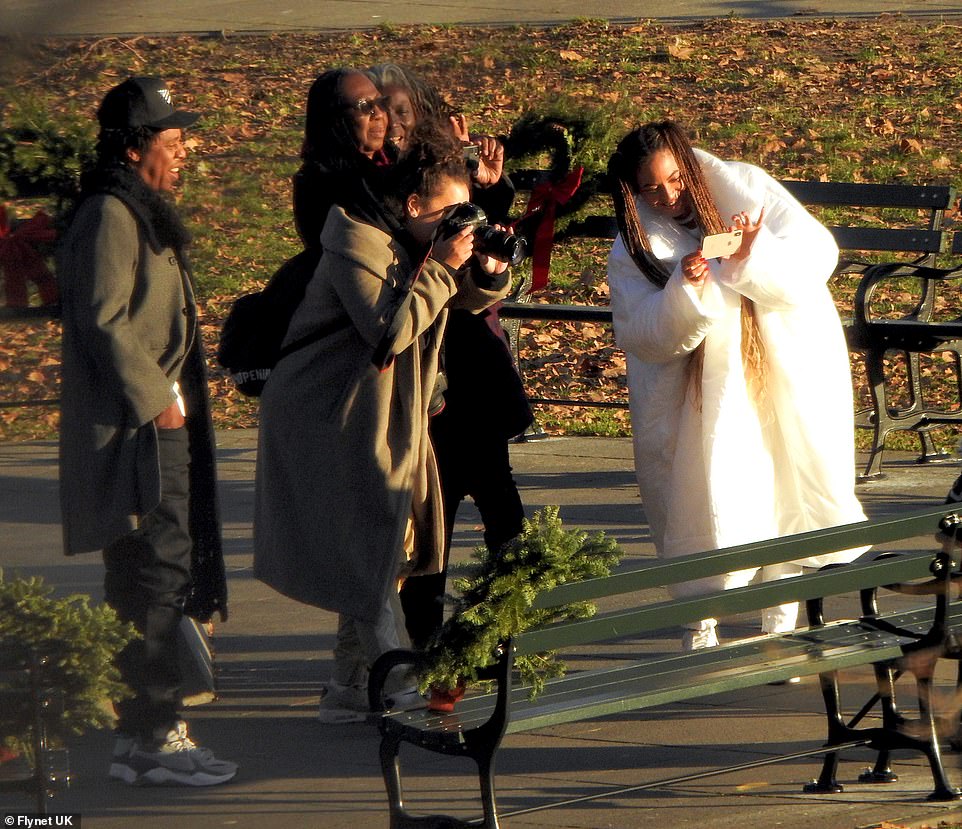 Good vibes: The Queen Bey certainly looked in the Christmas spirit as she had a big smile on her face throughout much of the outing especially when taking a picture of the park bench on her iPhone The world in his hands: Jay wrapped his arms around his grandmother and daughter while also joined by his mother Gloria Carter

She told the publication: ‘Right now, after giving birth, I really understand the power of my body, I just feel my body means something completely different. I feel a lot more confident about it.

‘Even being heavier, thinner, whatever. I feel a lot more like a woman. More feminine, more sensual. And no shame.’

Speaking of the value of family, she added: ‘I feel like I have something that has grounded me so much more. Family has always been important. I’ve always had my mother and my father and my husband… life is so much more than… it’s not defined by any of this [fame and money].’ 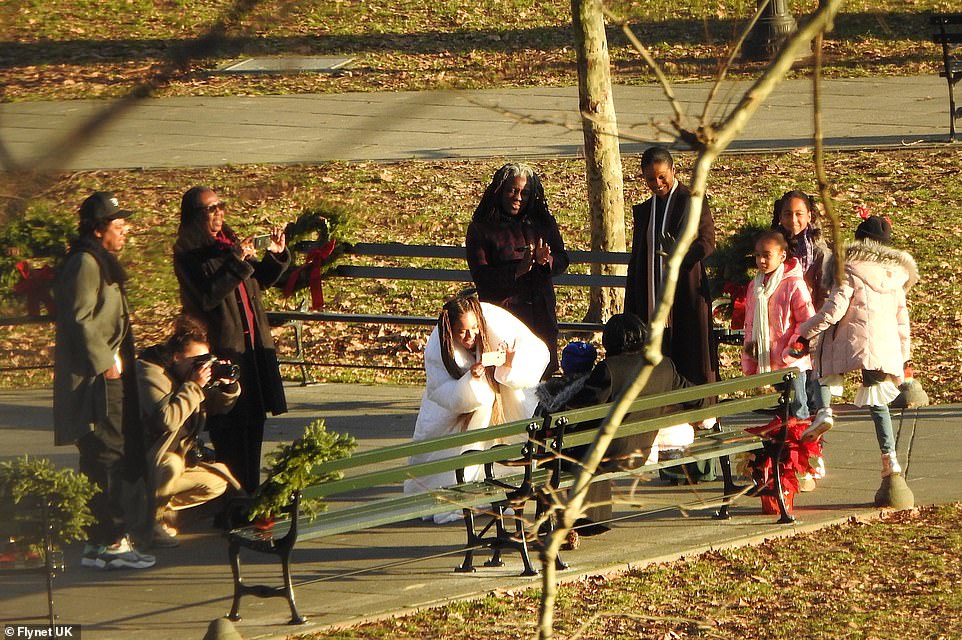 Proud mama: Beyonce had a huge smile on her face as she snapped a cute pic of Hattie with her great grandchildren Rumi and Sir on the park bench 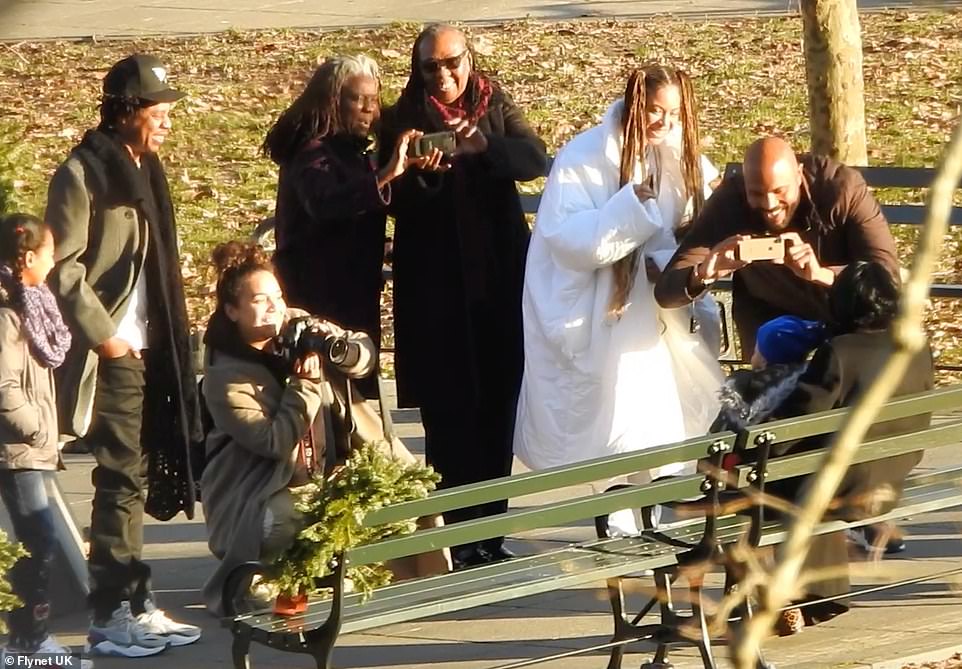 Lovely family: Beyonce smiled and tried to get the attention of the twins as they attempted to capture the perfect family moment 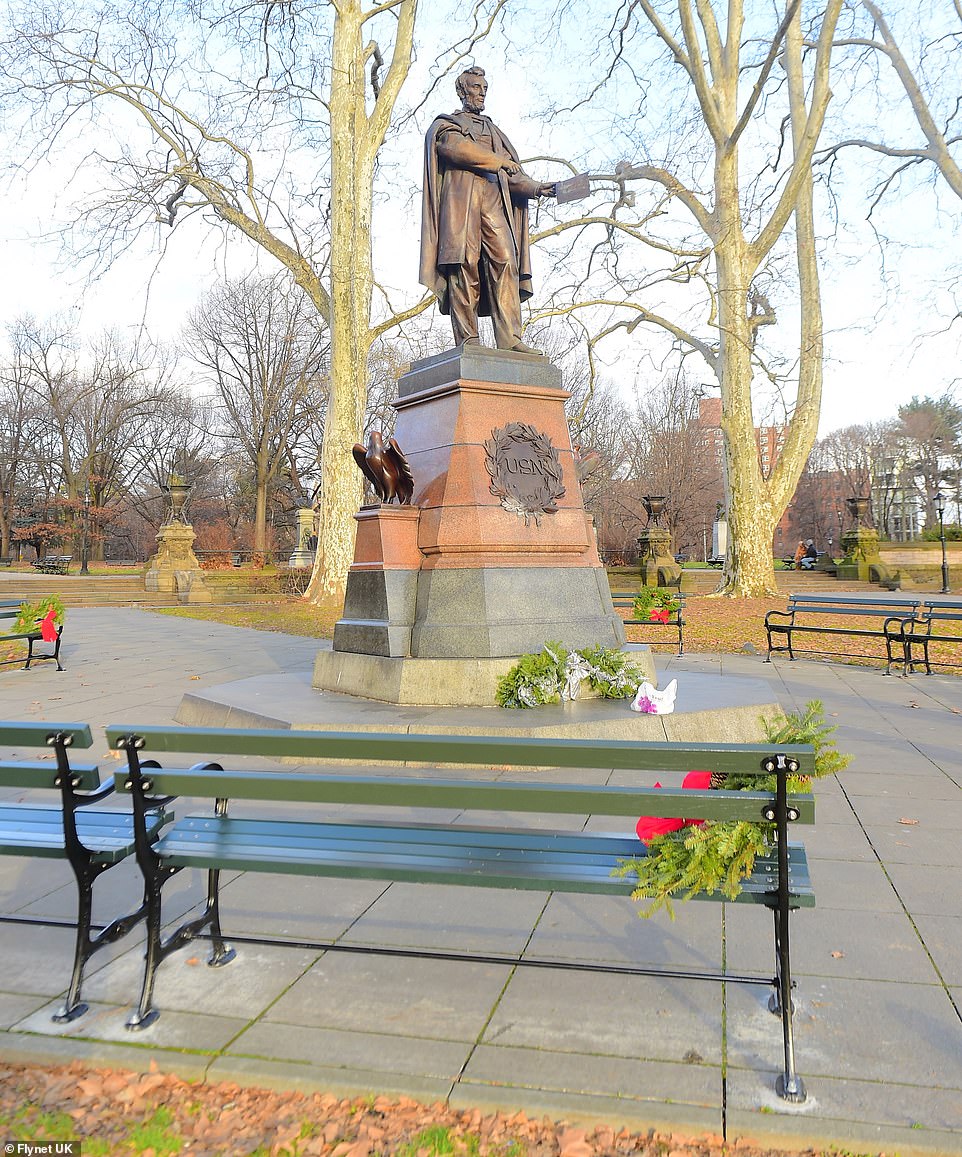 Legend: One of the biggest landmarks at Brooklyn’s prospect park is the Abraham Lincoln statue which  the new park bench sits directly in front of

Jay Z, meanwhile, cut a cool figure in a grey coat with a fur-lined collar over jeans and grey sneakers.

He sported his signature black Roc Nation snapback hat over his growing locks as he enjoyed the special day with his grandmother and mother Gloria Carter.

Their heartwarming outing comes after Beyonce treated fans to a slew of sultry snaps on her Instagram page.

The Freedom vocal talent caught the eye with her scanty uploads, as she was seen clad in a risque silver bodysuit that boasted a plunging neckline and a complementing blazer that sat at her thigh.

The mother-of-three took a page out of Kim Kardashian’s fashion playbook, as she added a pair of 90s-inspired, clear heels to her look and accessorized with a trendy, white purse and statement earrings. 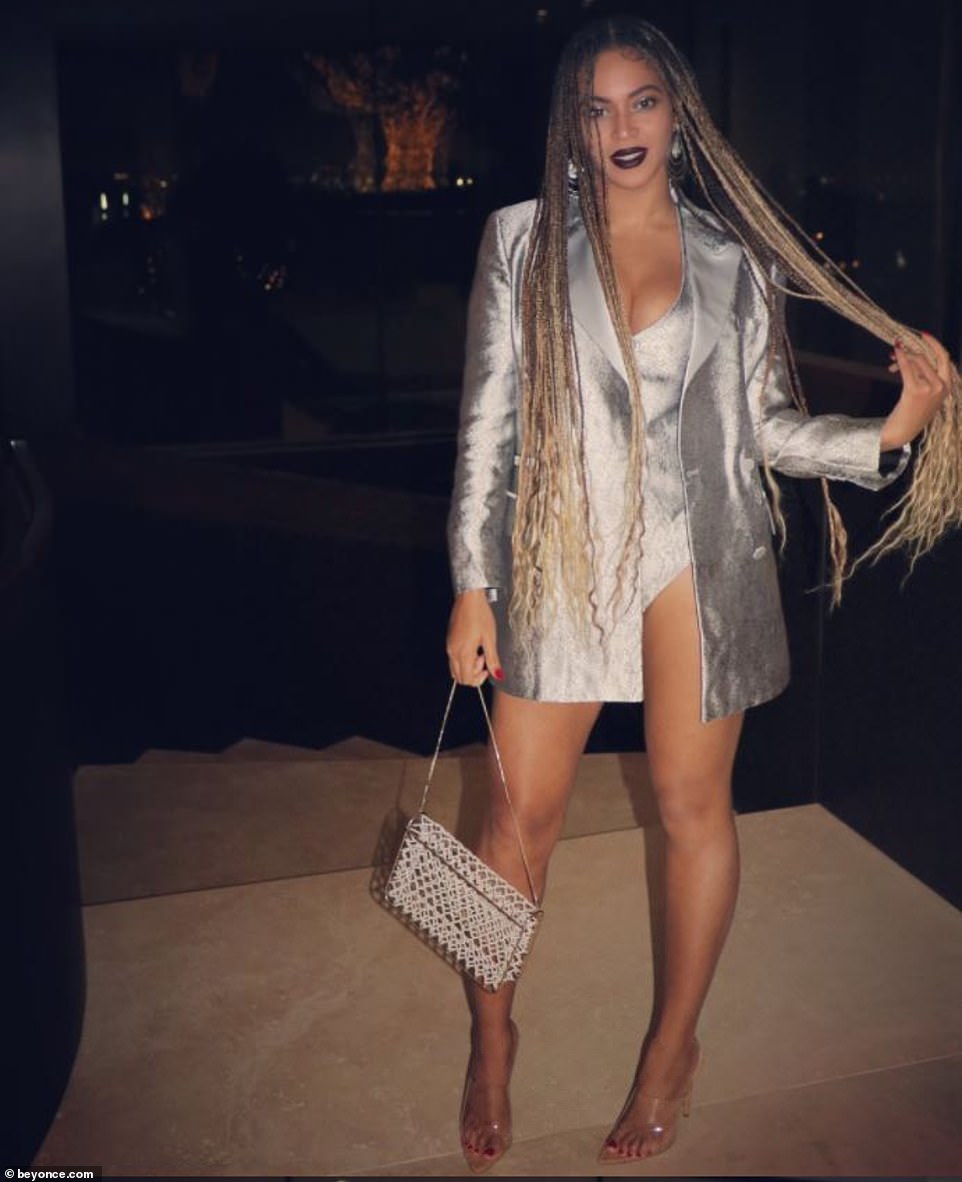 Showing off: On Saturday, Beyonce shared another collection of photos from one of her fashion looks on both Instagram and her website

Shimmer star: The singer looked to be inspired by the New Year as she posed in a metallic silver ensemble 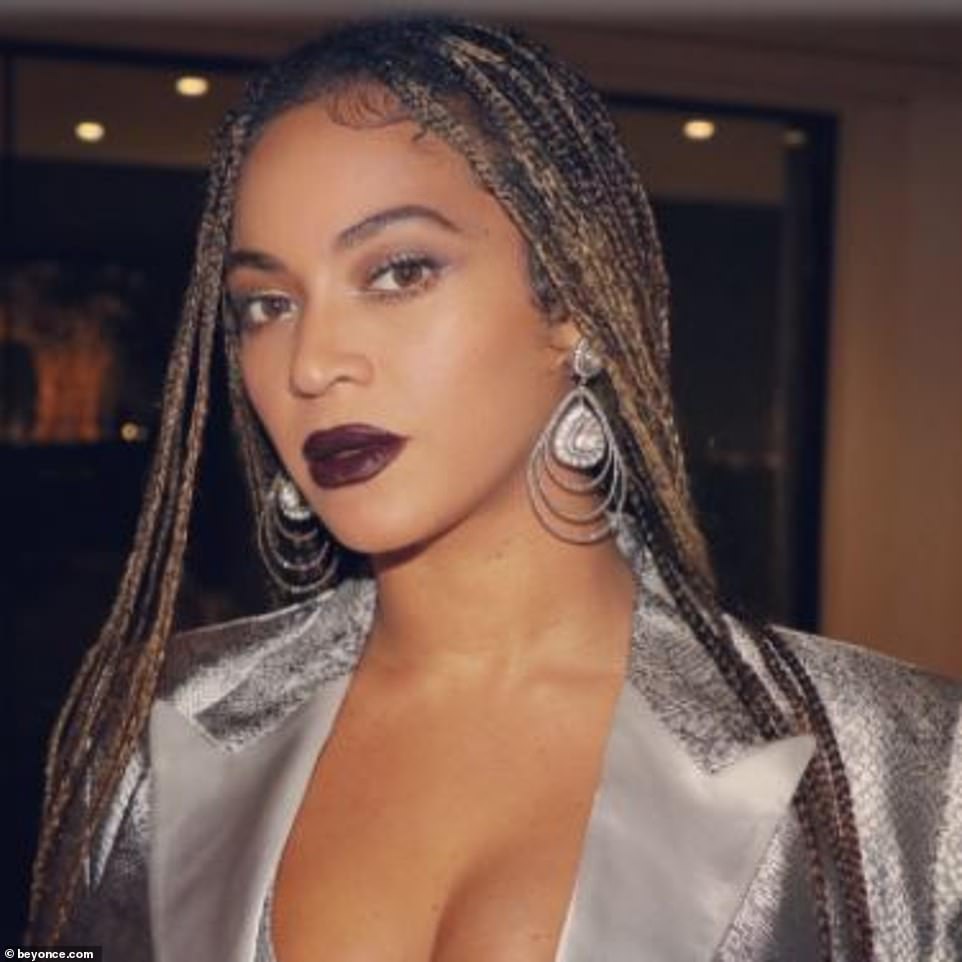 She finished off her look with glamorous make-up – choosing not to reveal the reason behind her VIP look as she shared it with her followers.

Although, her uploads could be seen as Beyonce brushing off a fake album leak in recent days.

The leak had targeted the former Destiny’s Child Member and confused fans, as they were led to believe she had released not one, but two new albums on Apple Music and Spotify.

However, to their dismay, news of the albums appeared to be fake as the counterfeit albums – Back Up, Rewind and Have Your Way – turned out to be older or previously recorded songs.

Fans were quick to point out that none of the music was new, and they were subsequently removed. 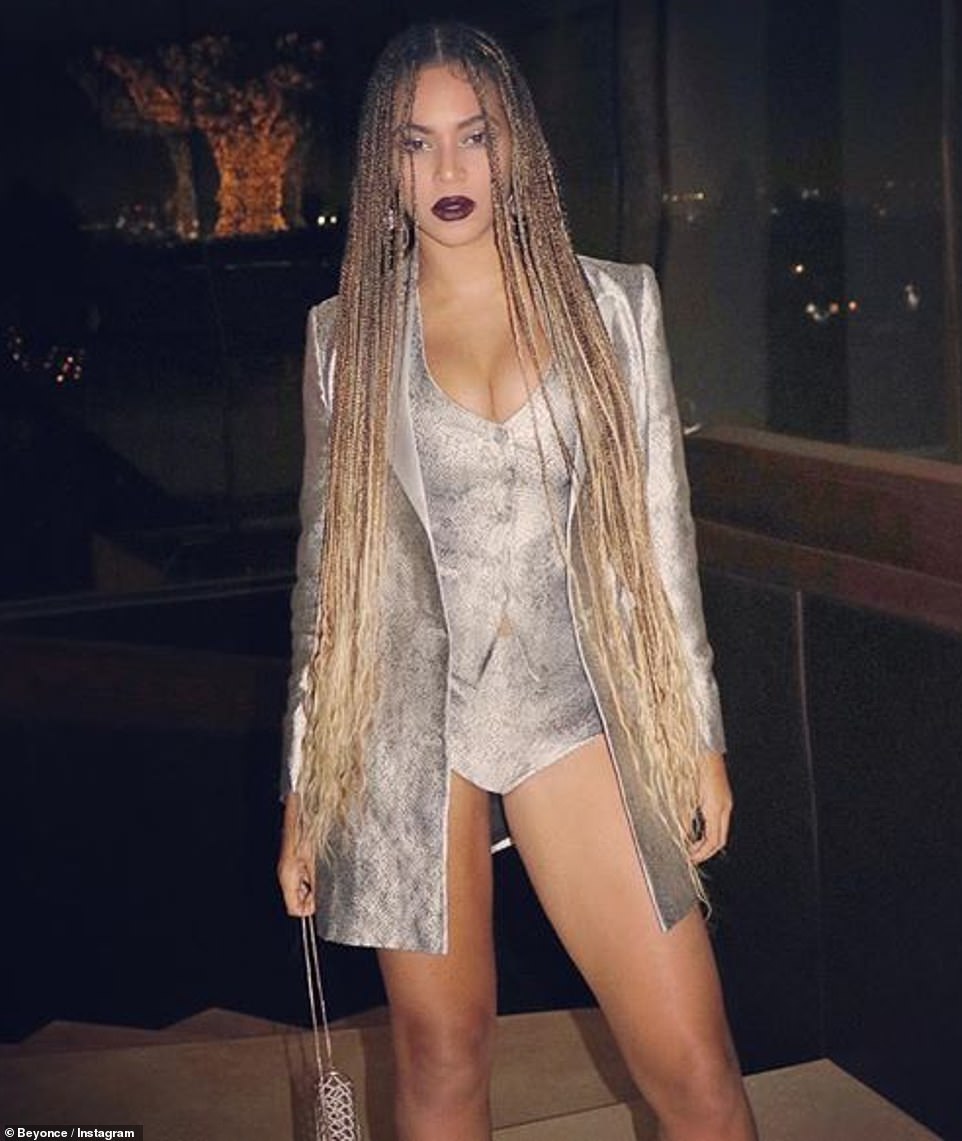 A standout piece: The Grammy-winner accessorized with a trendy, white purse and two sets of large earrings 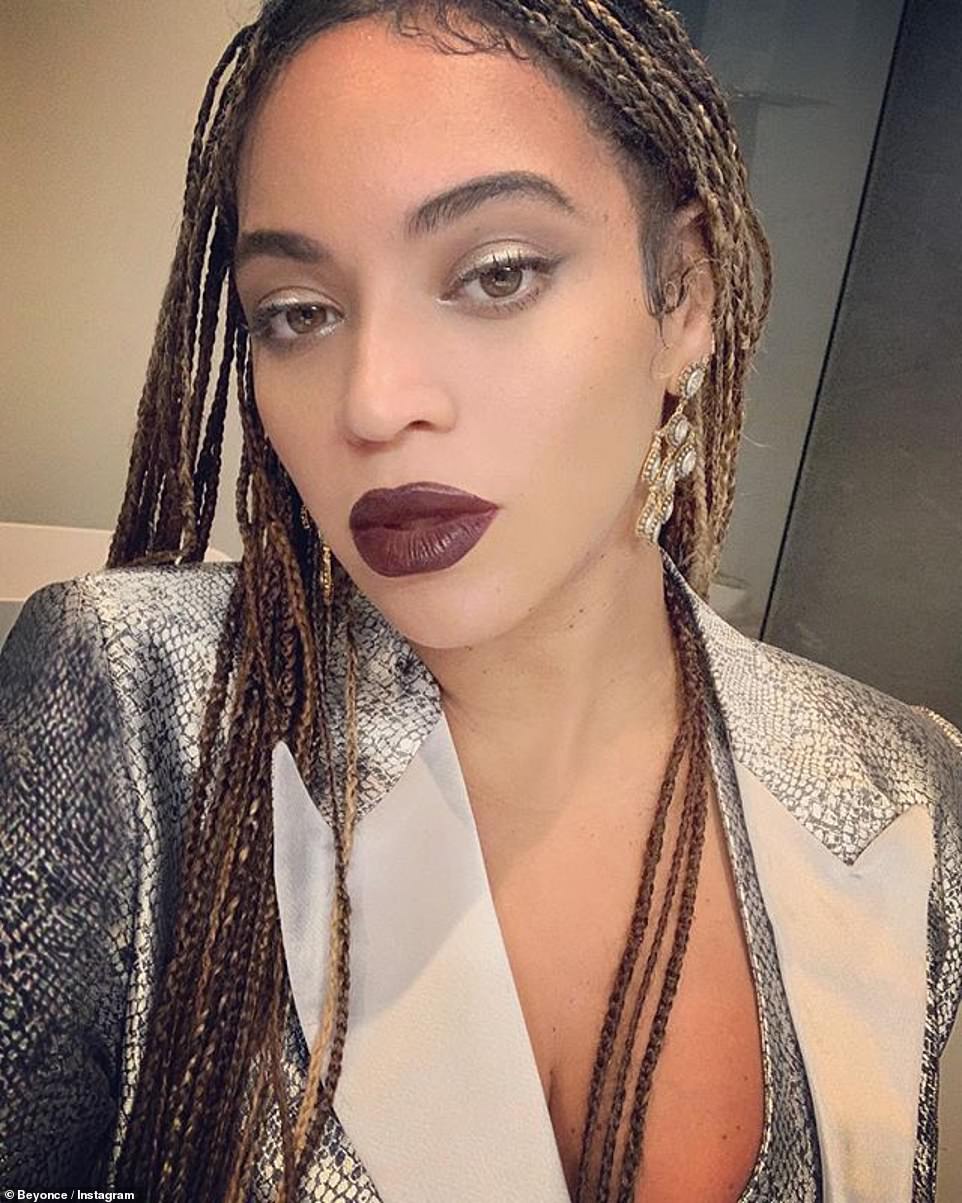 Stylish do: Beyonce blonde hair was styled in tiny braids