Beyonce was featured looking glamorous as she modeled her Ivy Park collection on her brand’s Instagram account on Saturday.

This came just as Cardi B released a short ‘Thank you’ video to the Irreplaceable singer for delivering a room full of flowers as a birthday gift.

In the set of snaps for her new Ivy Park line, the 28-time Grammy-Award winner looked flawless in a 3-piece silver ensemble that consisted of a long trench-coat, matching capris, and a midriff revealing fitted bra-top.

Stunner: Beyonce looked glamorous on Saturday as she modeled her Ivy Park collection on the brand’s Instagram account

The icon wore her beautiful long locks back in a braid that fell past her hips.

The beauty’s natural complexion shined through a smokey eye palette with a bold pink lip.

The stunner finished the look off with large silver earrings and diamond studs.

Cardi celebrated her 30th birthday on Tuesday, Oct 11, and on Friday, the WAP singer shared a touching video of the generous gift she received from her close friend Beyonce. 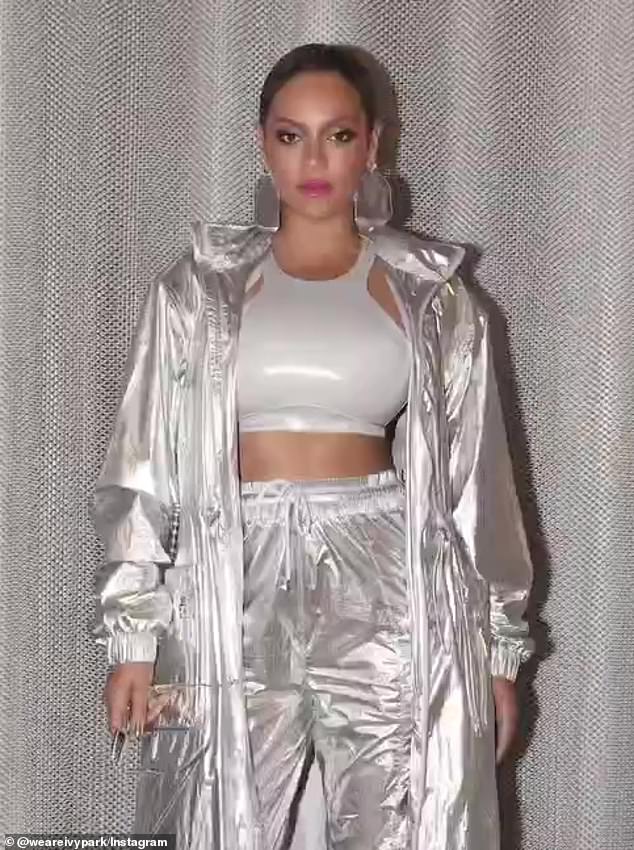 Her new collection: The 28-time Grammy-Award winner modeled a 3-piece silver ensemble that consisted of a long trench-coat, matching capris, and a midriff revealing fitted bra-top 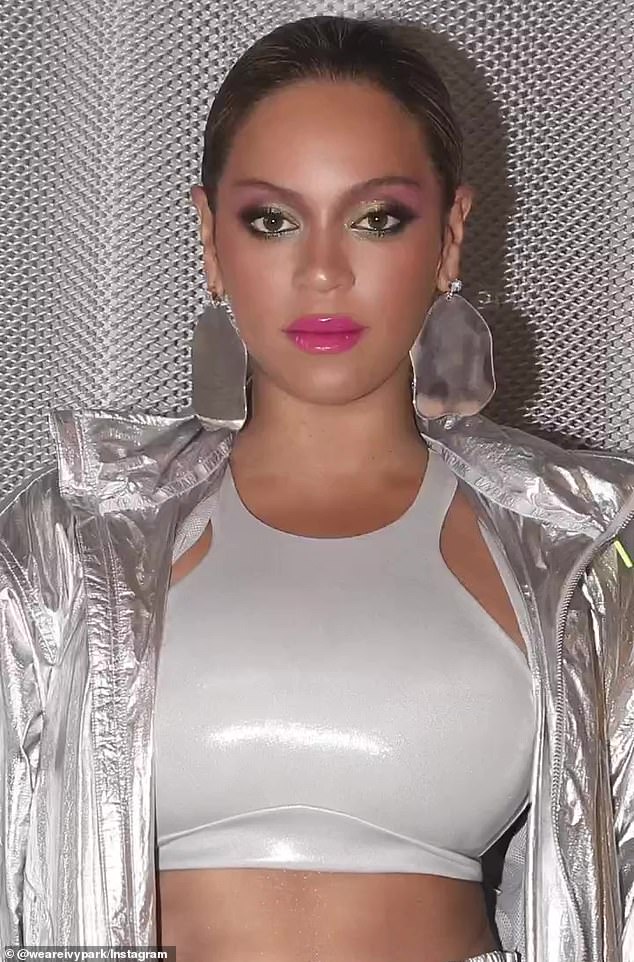 Cardi shared a thank you video with her 142 million followers that showed the entire room full of countless red, pink, and white roses.

This is not the first time Beyonce has done something like this for her close friend.

In 2020, Beyonce gifted an entire closet’s worth of Ivy Park merchandise to Cardi.

The two superstars have been close friends for years. 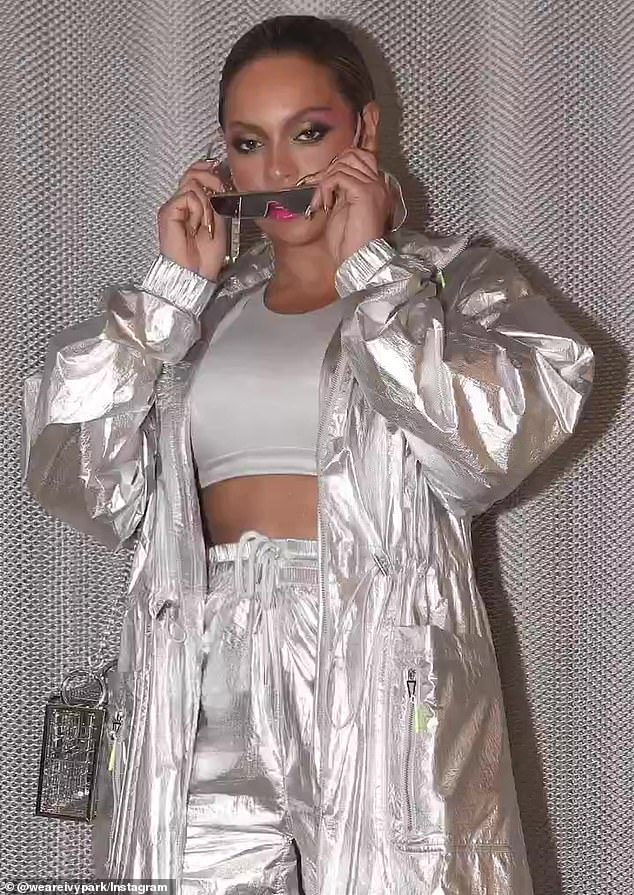 Glam up: The Entrepreneur added shades and a shiny square metallic purse 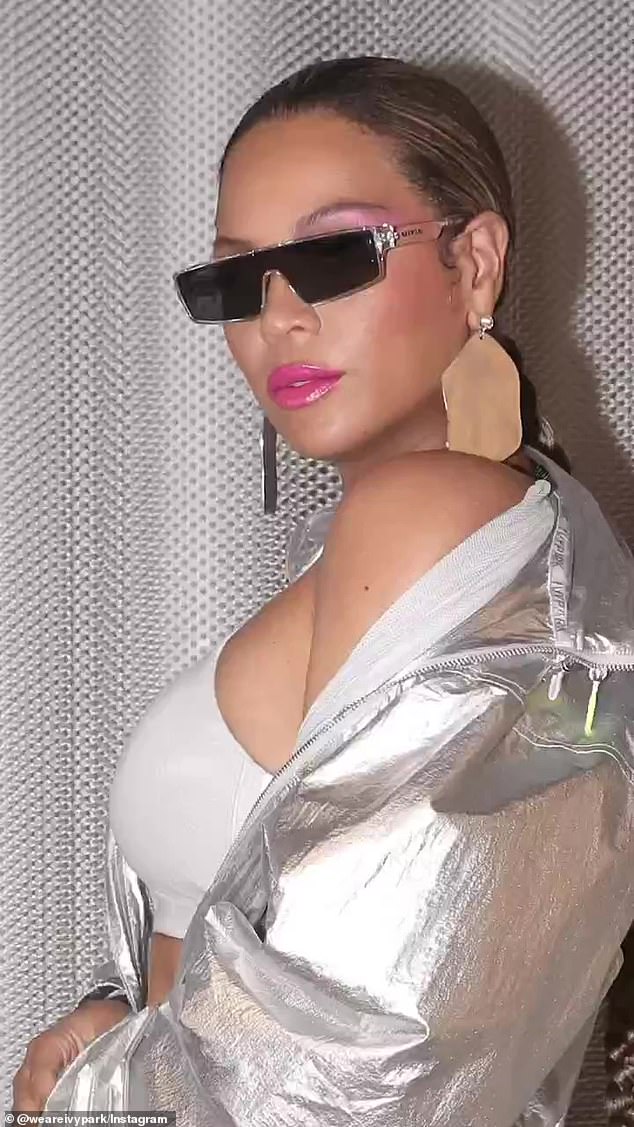 Done up: The beauty’s natural complexion shined through a smokey eye palette with a bold pink lip

In July, Beyoncé released her first TikTok video featuring Cardi alongside a group of people as they danced to Beyoncé’s new single, ‘Break My Soul,’ from her upcoming album Renaissance.

It panned around the room displaying the countless roses before cutting to a close-up of white roses with a birthday card. 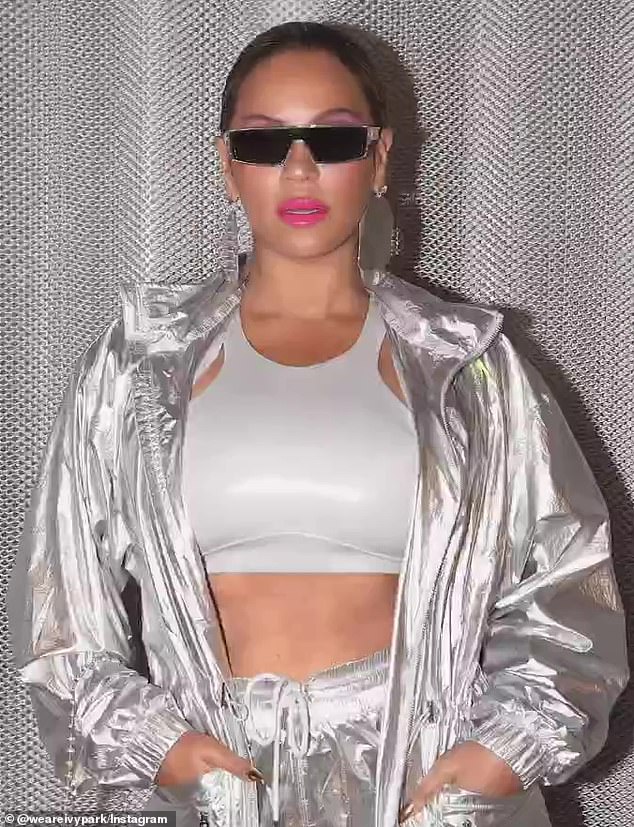 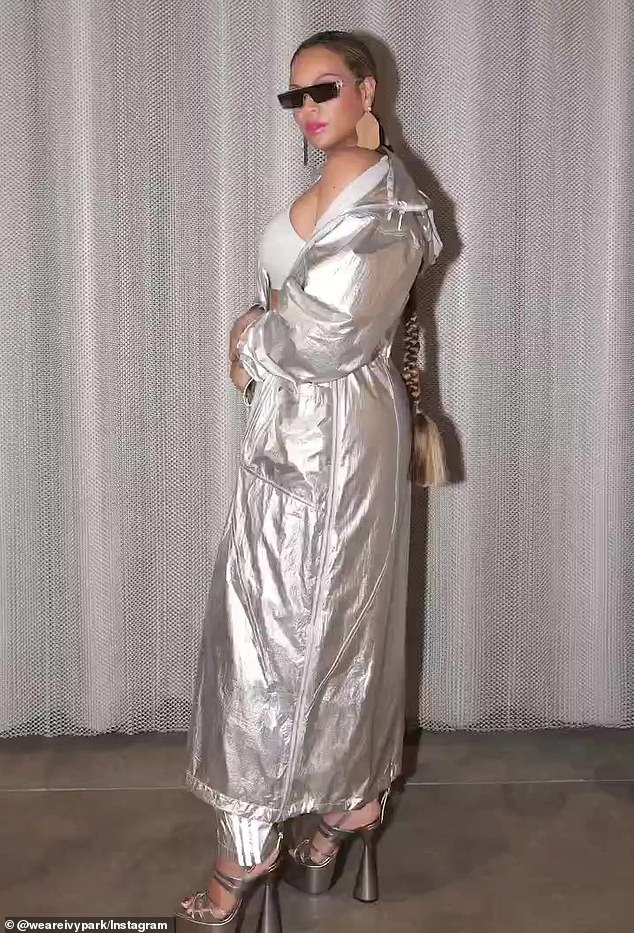 Fun fact: in 2020, Beyonce became the only solo artist besides Mariah Carey to have hit No. 1 in four different decades

The card slowly opened to reveal the caption ‘Cardi, Happy Birthday! I hope you had a beautiful day. All my love. God bless, B.’

Last week the English pop band Right Said Fred claimed the American singer had ripped them off by sampling their 1991 hit song I’m Too Sexy in her new hit Alien Superstar.

Beyonce hit back at brothers Fred and Richard Fairbrass by insisting she asked permission and paid the pair to sample their music.

In a statement shared with MailOnline on Friday, Beyonce’s team called the claims ‘erroneous, incredibly disparaging and false’. 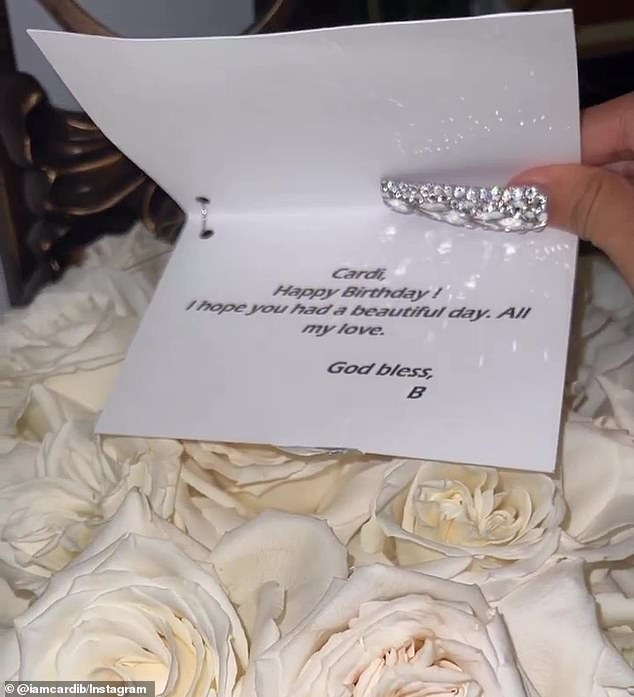 Nice gifts: This is not the first time she has treated her friend on her birthday. In 2020, Beyonce gifted an entire closet’s worth of Ivy Park merchandise to Cardi 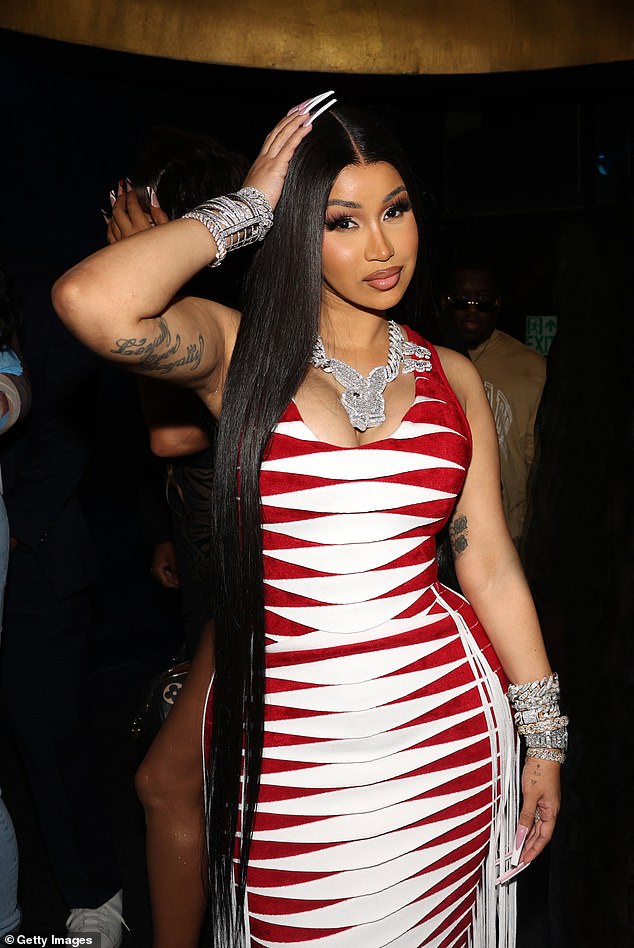 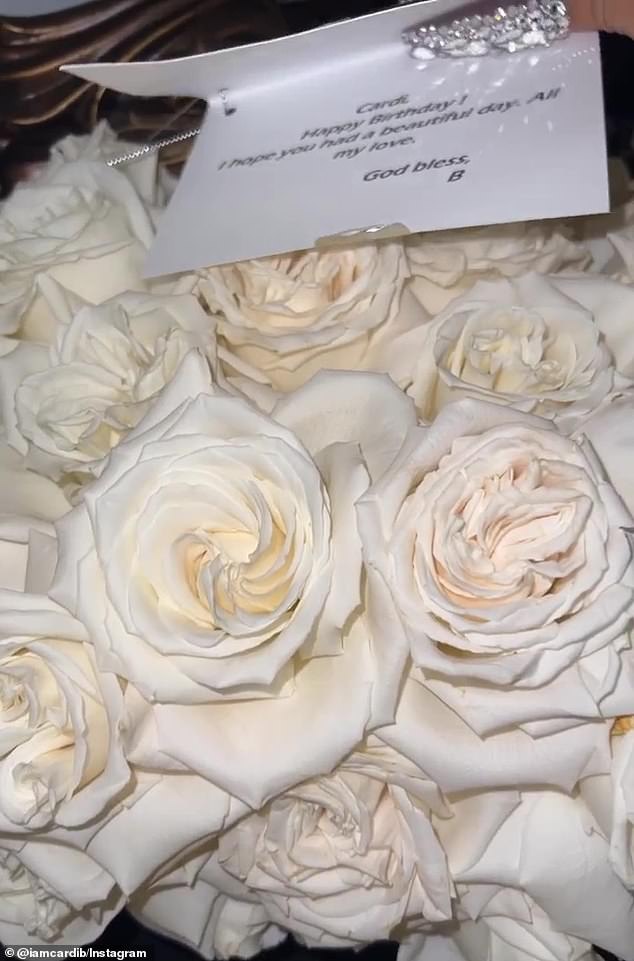 They insisted that permission was granted by Right Said Fred’s publisher and said the stars have ‘co-writer credit’ on Beyonce’s new single.

I’m Too Sexy artists Right Said Fred previously slammed Beyonce as ‘arrogant’ after claiming the superstar did not ask for permission to sample their music.

Their single, I’m Too Sexy, has been adapted before by the likes of Drake and Taylor Swift.

Yet the band claimed in an interview with The Sun:  ‘Normally the artist approaches us but Beyonce didn’t because she is such an arrogant person she just had probably thought ‘come and get me’ so we heard about it after the fact when you did. 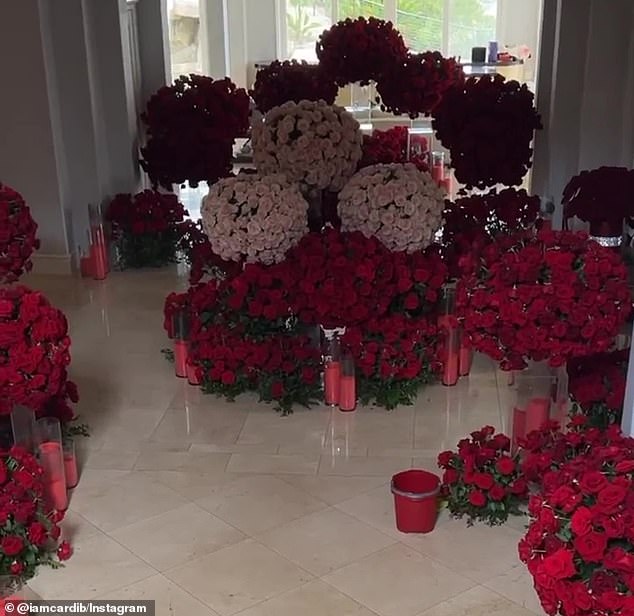 Imagine the smell: On Friday afternoon, Cardi shared a thank you video with her 142 million followers that showed a room full of countless red, pink, and white roses 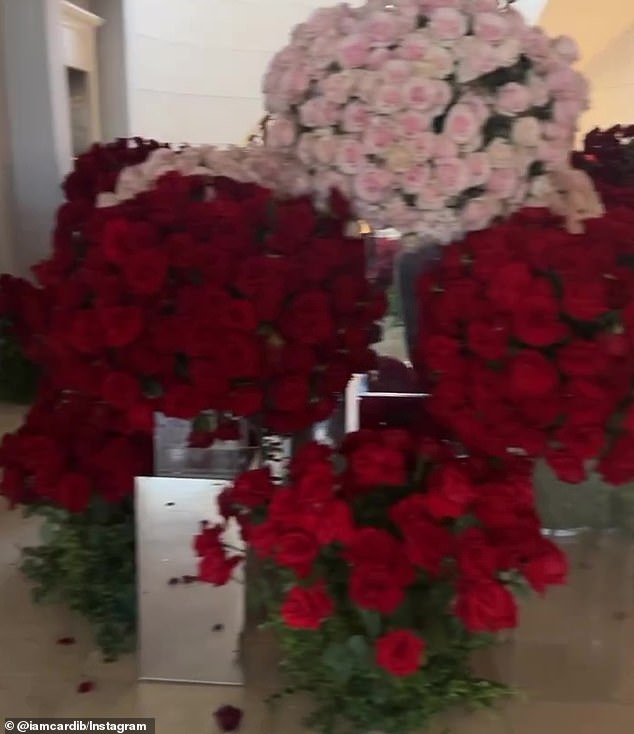 Countless: The video panned around the room of countless roses before cutting to a close-up of white roses with a birthday card

‘But everyone else, Drake and Taylor Swift, they came to us.’

The song has been adapted by both of the latter artists, with Swift using the same rhythm and pattern for her 2017 hit Look What You Made Me Do; while Drake used samples of the track for his 2021 collaboration Way 2 Sexy with Future and Young Thug.

Right Said Fred detailed the process they claim Beyonce ignored in sampling their material in her work.

‘To use our melody they need our permission so they send us the demo and we approve it and if so we get a co-write credit,’ they said. ‘With this Beyoncé thing there are 22 writers it’s ridiculous so we would get about 40p.’

I’m Too Sexy held the top spot on the U.S. charts for three weeks in early 1992 and spent 21 weeks on the Top 100 chart, according to Billboard. 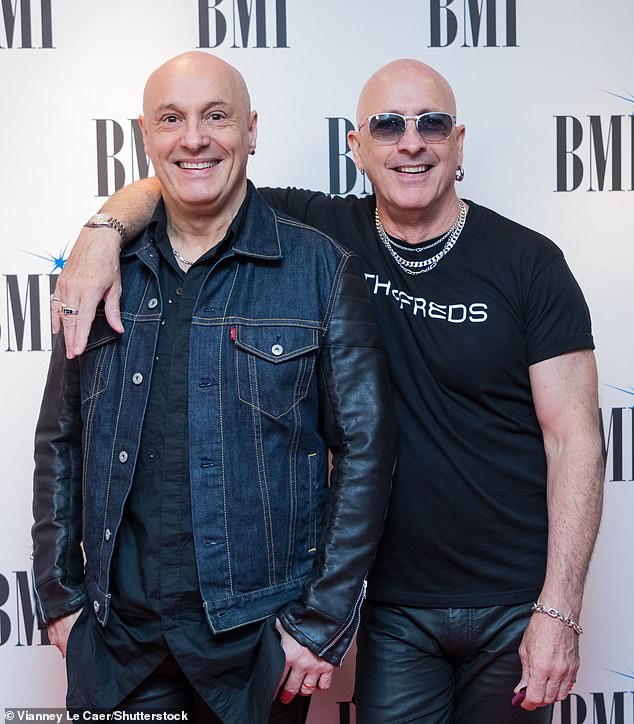 Speaking out: I’m Too Sexy artists Right Said Fred, including brothers Fred Fairbrass, 69, and Richard Fairbrass, 58, slammed Beyonce as ‘arrogant’ after claiming the superstar did not ask for permission to sample their 1991 hit for her song Alien Superstar 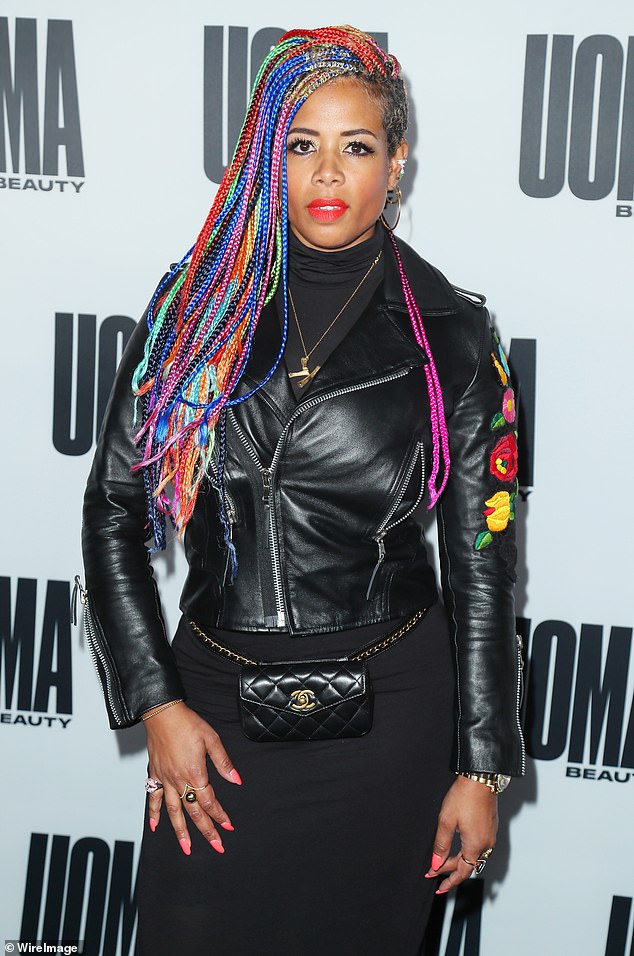 Critic: Kelis was upset that Beyonce sampled her material from her hit Milkshake without letting her know in advance, leading Beyonce to remove the sample from her song Energy

The song is off of Beyonce’s latest album Renaissance, which has garnered criticism for other tracks.

Kelis was upset that Beyonce sampled her material from her hit Milkshake without letting her know in advance, leading Beyonce to remove the sample from her song Energy.

The 2003 hit from Kelis was penned by Pharrell Williams and Chad Hugo (formerly known as The Neptunes), who both were credited on the Beyonce track, though Kelis wasn’t. Beyonce’s website indicated that the samples used on the track were interpolated, altering the existing sound for a new song. 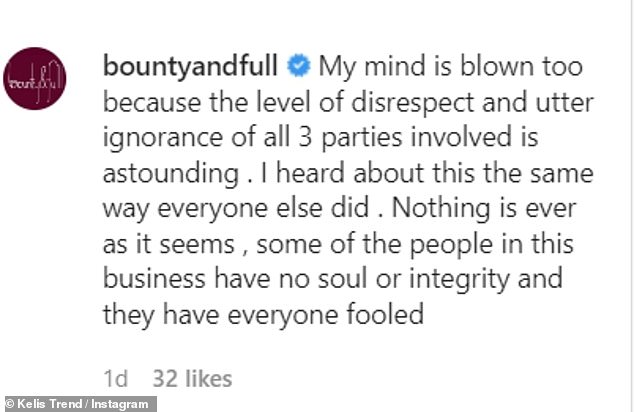 Kelis said, ‘My mind is blown too because the level of disrespect and utter ignorance all 3 parties involved is astounding’

‘My mind is blown too because the level of disrespect and utter ignorance … is astounding,’ Kelis said on social media of the use of her track. ‘I heard about this the same way everyone else did. Nothing is ever as it seems, some of the people in this business have no soul or integrity and they have everyone fooled.’

In response to one comment that Beyonce clearly admires her work, Kelis replied: ‘Admire is not the word.’

When another expressed excitement about them working together, the mom-of-two, who was writing under her celebrity chef account @bountyandfull, claimed: ‘It’s not a collab it’s theft.’

Beyonce also vowed to remove an ableist slur from her Renaissance track Heated, following a backlash from fans and disability equality charity, Scope. 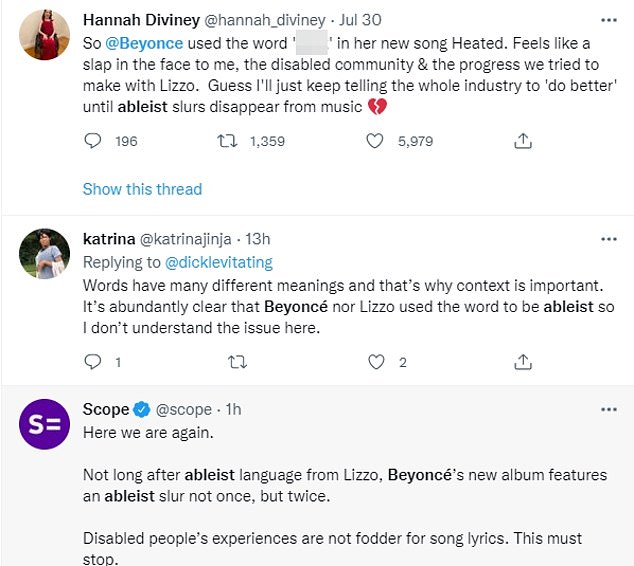 The singer had the lyrics: Sp**zin’ on that ass, s**z on that ass’ in the song which she collaborated on with Drake.

A statement given to MailOnline said ‘The word, not used intentionally in a harmful manner, will be replaced in the lyrics.’

However, Beyonce failed to include an apology.

Fans believed there can no excuse for ignorance when it comes to using the word – especially after Lizzo apologised for using the same word on her song Grrrls just weeks previously – and had her track re-recorded.

Something to say: Beyonce also vowed to remove an ableist slur from her Renaissance track Heated, following a backlash from fans and disability equality charity, Scope

The word can mean to ‘freak out’ or ‘go crazy’ in the US but it’s very widely known that it comes from the word ‘spastic’.

The term is often used in a derogative manner to describe those with disabilities, especially cerebral palsy.

Warren Kirwan, Media Manager at disability equality charity Scope, said ahead of the statement: ‘It’s appalling that one of the world’s biggest stars has chosen to include this deeply offensive term.

‘Just weeks ago, Lizzo received a huge backlash from fans who felt hurt and let down after she used the same abhorrent language.

‘Thankfully she did the right thing and re-recorded the song. It’s hard to believe that could have gone unnoticed by Beyoncé’s team.

‘Words matter because they reinforce the negative attitudes disabled people face every day, and which impact on every aspect of disabled people’s lives.

‘Beyoncé has long been a champion of inclusivity and equality, so we’d urge her to remove this offensive lyric.’

That lyric controversy led Monica Lewinsky to propose having a lyric referencing her affair with then-President Bill Clinton removed from Beyonce’s 2013 track Partition.

‘uhmm, while we’re at it…. #Partition,’ she tweeted, along with a link to a Variety article reporting on the matter. 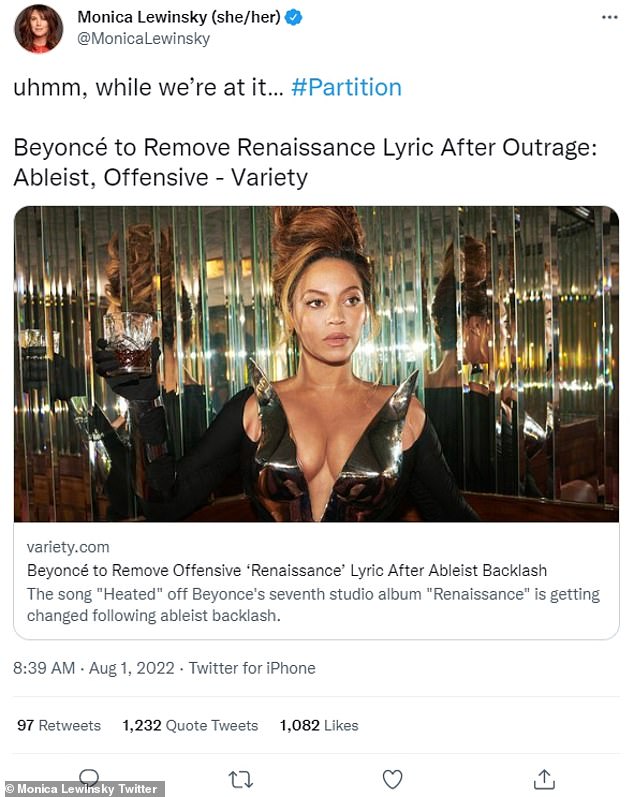 ‘While we’re at it…’: Lewinsky raised the issue on Twitter after news of the lyric removal broke

Lewinsky famously had an affair with Clinton between 1995 and 1997, with their relationship beginning when she was a 22-year-old unpaid White House intern – and eventually led to his impeachment on December 19, 1998.

Lewinsky previously suggested the lyric be amended in a 2014 Vanity Fair article.

‘Thanks, Beyoncé, but if we’re verbing, I think you meant ‘Bill Clinton’d all on my gown,’ not ‘Monica Lewinsky’d,” she wrote.