Beyoncé’s is facing fierce backlash for not being size inclusive after her highly-anticipated Adidas x Ivy Park collection dropped this weekend with sizes only going up to an XL.

The newly-released capsule collection is made up of gender-neutral activewear such as jumpsuits, biker shorts, hoodies, and sports bras. While it quickly sold out, some fans were outraged that the sizing excluded many plus-size customers.

Critics took to Twitter slam Beyoncé for promoting inclusivity as part of her brand but failing to include sizes larger than an XL — a size 16/18 at Adidas — when she released her collection.

Backlash: Beyoncé is being accused of size exclusion after the release of her highly-anticipated Adidas x Ivy Park collection over the weekend 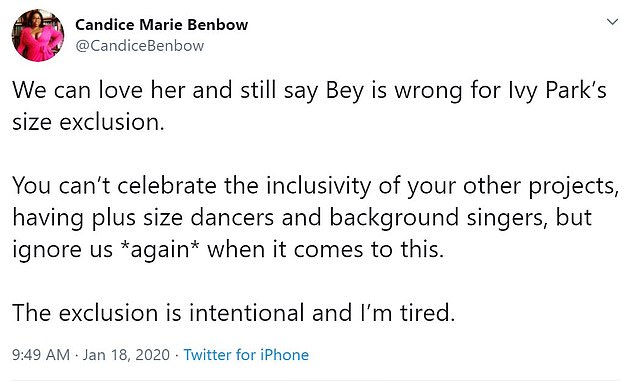 Hitting back: Fan took to Twitter to criticize the singer for promoting inclusivity as part of her brand but failing to include size options for plus-size customers

The average size of an American woman is now between 16 to 18, according to a 2016 study by the International Journal of Fashion Design, Technology, and Education, and Beyoncé’s lack of options for larger customers didn’t sit well with some of her fans.

‘I love Beyoncé. I am a noted member of the Beyhive. It is also incredibly disappointing that a woman who has made inclusion a part of her brand willfully excluded plus-size people from her athleisure line,’ author Evette Dionne tweeted. ‘And this isn’t the first time.’

The Twitter user was likely referring to Beyoncé’s first Ivy Park collection, which was done in collaboration with Topshop in 2016. Like her new line, it was also only available in sizes XS to XL, according to Bustle.

Essayist Candice Marie Benbow pointed out that just a few years ago, the singer was praised for inclusivity when she included plus-size dancers at her Coachella show.

Her background singers, ‘The Mamas,’ are also full-figured women, and the size diversity of her performers has been used as examples of her body-positive message. 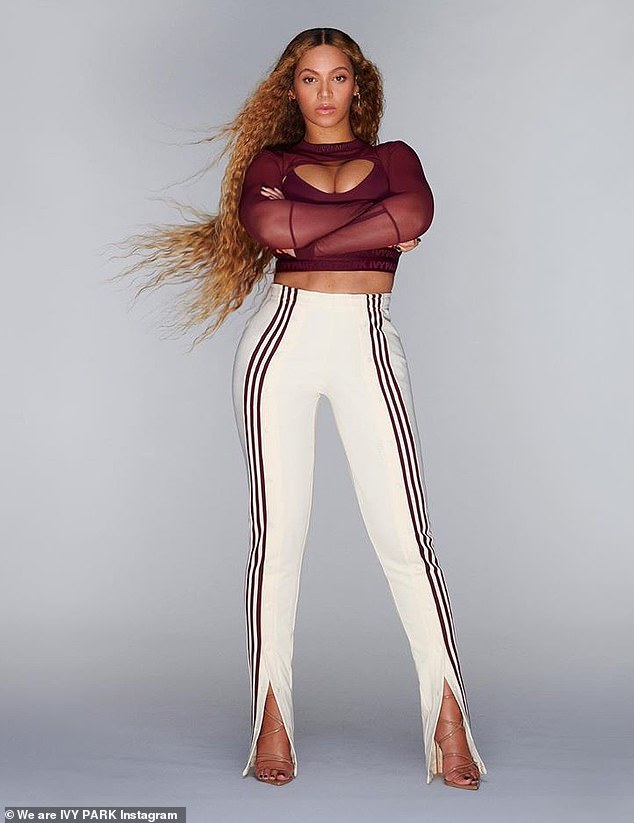 Key pieces: The newly-released capsule collection, which quickly sold out, is made up of gender-neutral activewear such as jumpsuits, biker shorts, hoodies, and sports bras

Limitations: Sizes for the athleisure line range from XS to XL, which is a size 16/18 at Adidas 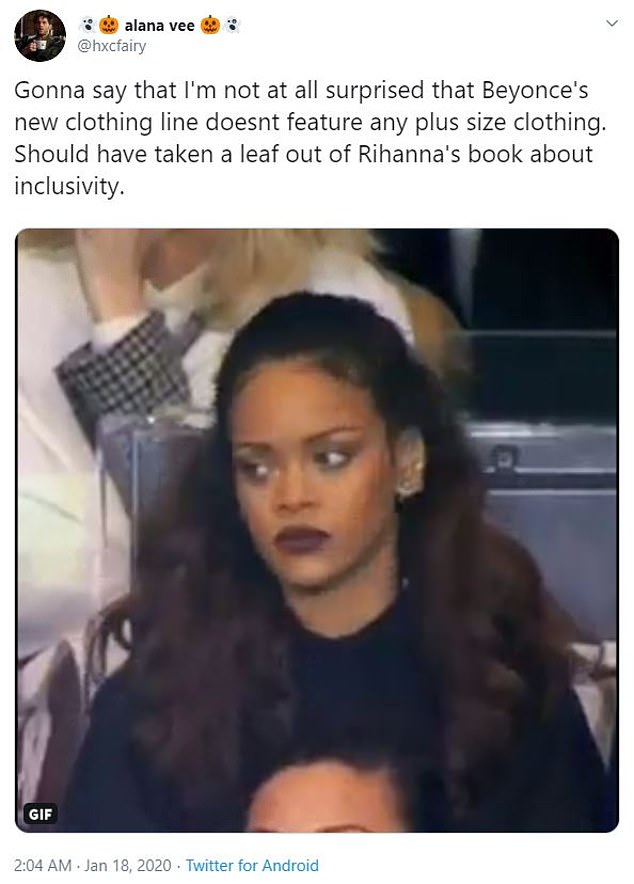 Outrage: Some people couldn’t resist comparing Beyoncé to Rihanna, who was widely praised for size inclusivity when she released her Savage x Fenty lingerie line

‘We can love her and still say Bey is wrong for Ivy Park’s size exclusion,’ Benbow tweeted. ‘You can’t celebrate the inclusivity of your other projects, having plus size dancers and background singers, but ignore us *again* when it comes to this. The exclusion is intentional and I’m tired.’

‘I stan Beyoncé, but it’s disappointing to see that this collection only goes up to an XL, especially because Adidas recently started selling size inclusive activewear as well,’ writer Gianluca Russo commented.

In the fall, Adidas released its first inclusive size collection in collaboration with Universal Standard that goes up to size 4X, and some saw Beyoncé’s decision to only have her line go up to XL as a personal choice.

‘Ivy Park not having plus sizes is so gross considering Adidas did 6.41 billion in revenue last quarter and nothing they’re selling is so revolutionary that it would take time to size up,’ one person noted. ‘They can afford to and they know how to. They CHOSE not to.’

Amid the criticism, a few Twitter users saw that the line seemingly went up to 4X on some sites and shared screenshots of the Adidas x Ivy Park sizes at ASOS and Shoepalace.com. 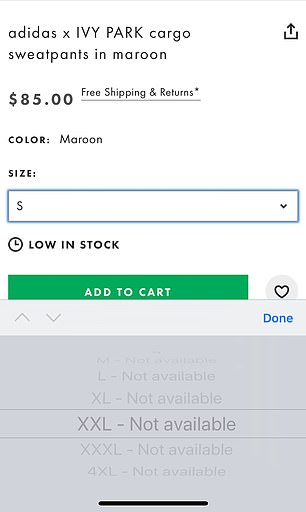 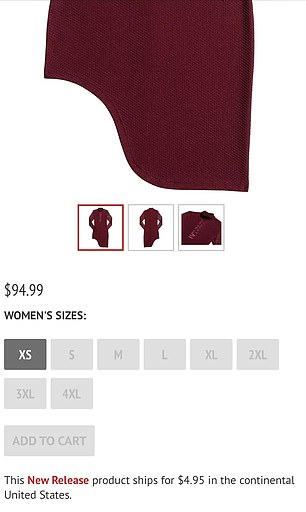 Confusing: A few Twitter users saw that the line seemingly went up to 4X on some sites and shared screenshots of the Adidas x Ivy Park sizes at ASOS (left) and Shoepalace.com (right) 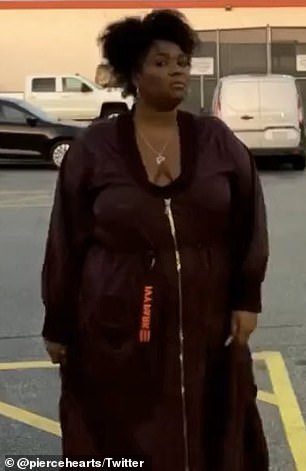 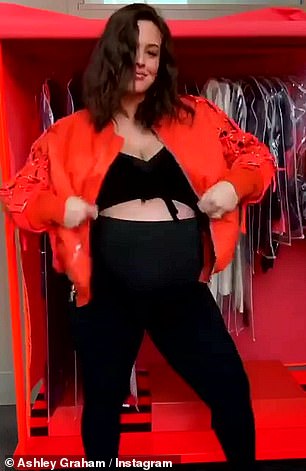 Defending Bey: People noted that plus-size stars Lizzo (left) and pregnant Ashley Graham (right) had taken to Instagram to show footage of themselves modeling pieces from the line

‘Asos had the collection with sizes up to 4xl. Was this not available at other sites?’ one person asked.

However, as Teen Vogue pointed out, any size larger than XL was shown as unavailable in all the screenshots shared.

According to an official press release for Adidas x Ivy Park, sizes range from XS to XL and pieces are priced between $25 to $250.

Ahead of the release of Adidas x Ivy Park, Beyoncé sent her celebrity friends boxes filled with the entire collection. Some critics noted that she didn’t send boxes to plus-size stars, while others argued that wasn’t true.

Plus-size stars such as Lizzo and pregnant model Ashley Graham both took to Instagram to show footage of themselves modeling pieces from the line, which added to the confusion.

‘I keep seeing Ivy Park doesn’t have plus sizes but seeing plus size girls in Ivy Park,’ one person wrote, while another added: ‘Wait a minute. I’m seeing Lizzo in Ivy Park & y’all said the line didn’t come in plus size.’ 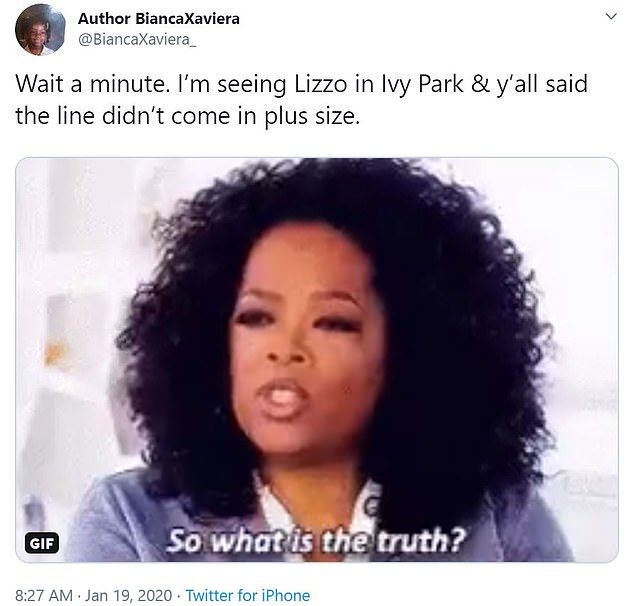 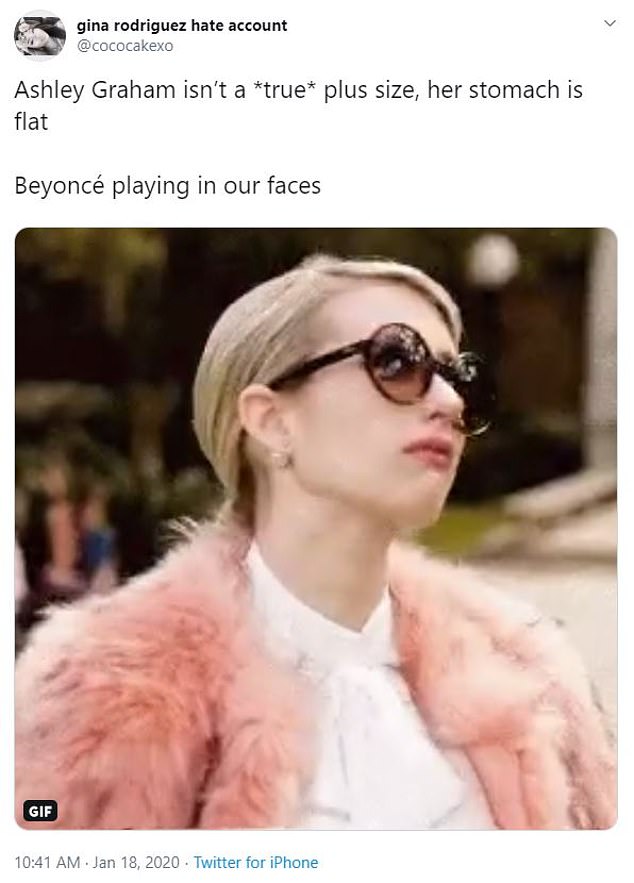 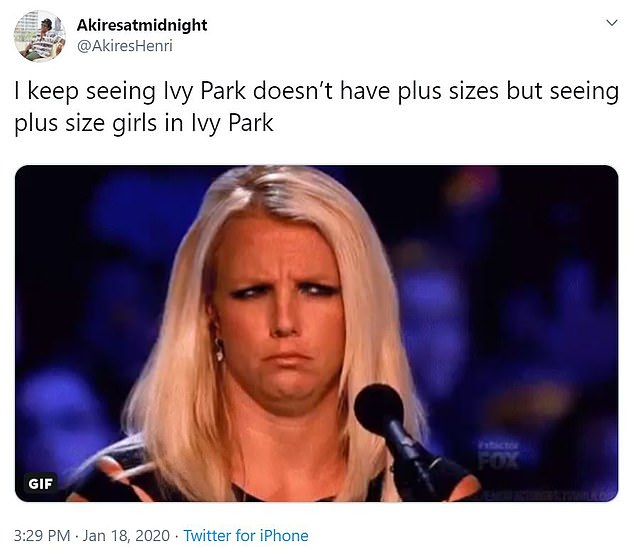 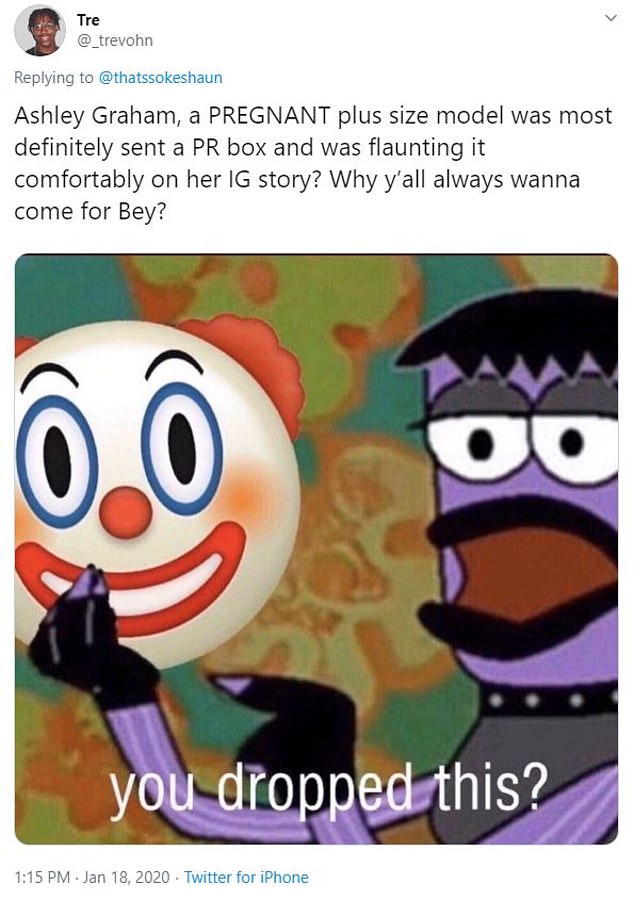 Hard to believe: Some Twitter users admitted they were confused by the backlash because they’ve seen pictures of plus-size stars wearing the line

‘Ashley Graham isn’t a *true* plus size, her stomach is flat Beyoncé playing in our faces,’ someone else argued.

Some people couldn’t resist comparing Beyoncé to Rihanna, who was widely praised for size inclusivity when she released her Savage x Fenty lingerie line.

‘Gonna say that I’m not at all surprised that Beyonce’s new clothing line doesn’t feature any plus size clothing. Should have taken a leaf out of Rihanna’s book about inclusivity,’ one person wrote.

‘None of Beyoncé’s clothes were sent to plus size influencers or models,’ another added. ‘The clothes stop at size XL. If @SavageXFenty can go up to the 4XL why can’t B?’

Neither Beyoncé nor Adidas has responded to the backlash, though the mother of three recently opened up about body positivity in the January issue of Elle magazine.

‘If someone told me 15 years ago that my body would go through so many changes and fluctuations, and that I would feel more womanly and secure with my curves, I would not have believed them,’ she said. ‘But children and maturity have taught me to value myself beyond my physical appearance and really understand that I am more than enough no matter what stage I’m at in life.’