Rapper and reality television star Bhad Bhabie believes the people who subscribed to her OnlyFans account as soon as she turned should be 18 ‘in jail.’

While recently appearing on Barstool Sports’ Sundae Conversation, the Gucci Flip Flops hitmaker, 19, discussed her decision to create an account on the site on the evening she turned the legal age of consent.

When asked if she believes that the people, who subscribed ‘right away’ should be ‘in jail’ by host Caleb Pressley, the teen replied: ‘Yes.’

Heated opinion: Rapper and reality television star Bhad Bhabie believes the people who subscribed to her OnlyFans account as soon as she turned should be 18 ‘in jail’

Bhabie also stated that most of her profits are earned through direct messages and that she regularly receives unwanted, explicit penis photos.

As for who is viewing her content, the performer said she believes her demographic is between ’20 to 40 years old’ and is mostly white married men ‘with like six kids’ and ‘a daughter’ her age.

Last year, Bhabie revealed she earned a whopping $50 million from her OnlyFans account in a single year. 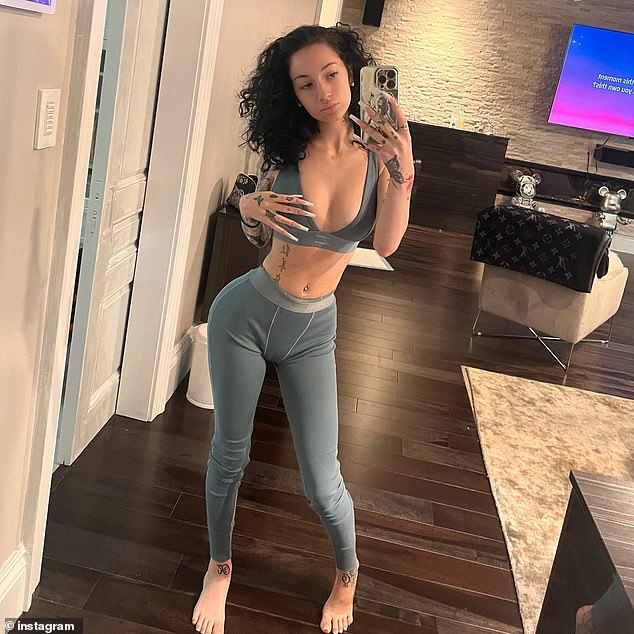 Creepy fans: While recently appearing on Barstool Sports’ Sundae Conversation , the Gucci Flip Flops hitmaker, 19, discussed her decision to create an account on the site on the evening she turned the legal age of consent

She created the account in April 2021, and in just her first six hours on the X-rated subscription social media site she netted $1 million.

In 2022, Bregoli – who also goes by Bhad Bhabie – revealed she no longer wants to be referred to as the ‘Cash me outside’ girl because she has become successful on her own accord. She first uttered the phrase during a 2016 appearance on Dr Phil while challenging the show’s entire audience to fight her.

‘It’s not something that I’m just so in love with being the girl from Dr. Phil and saying some crazy s***, that’s not how I feel,’ the teen told TMZ in April, before listing off some of her accomplishments – including earning $50 million on the subscription site and getting nearly $1 million for endorsing makeup company Copy Cat Beauty. 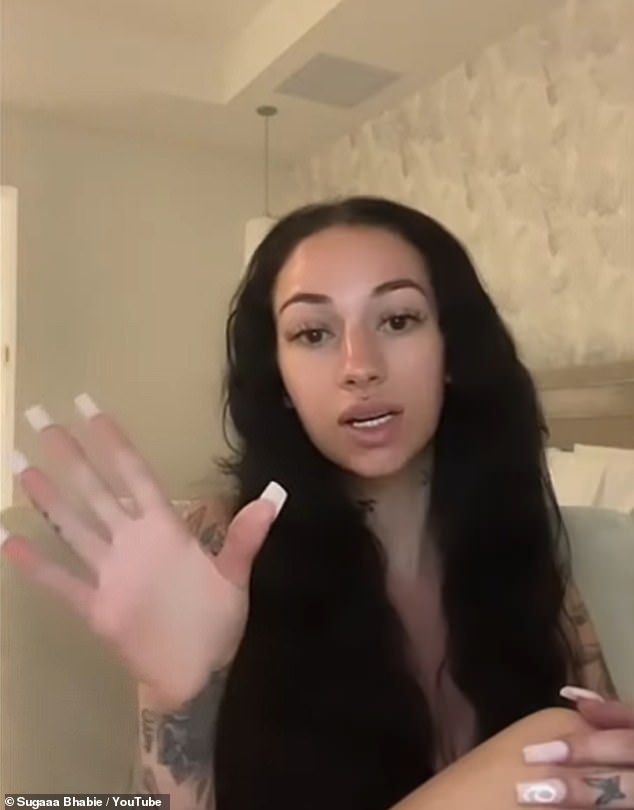 Impressive: Last year, Bhabie revealed she earned a whopping $50 million from her OnlyFans account in just one year 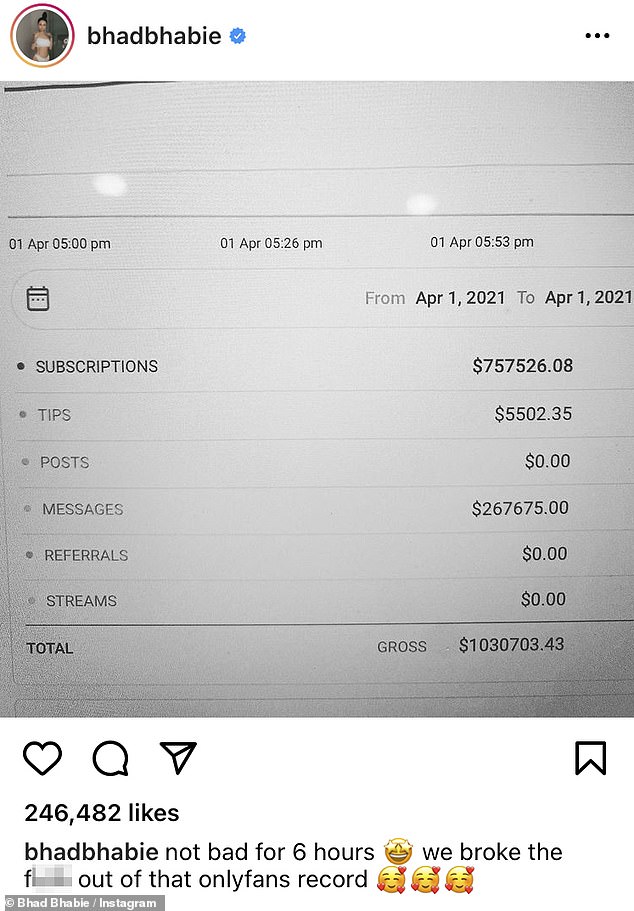 She suggested people start referring to her by those accomplishments, instead, also suggesting new monikers: ‘the f****** youngest female of the decade’ to go platinum, the ‘Gucci flip flops girl,’ or the ‘high b**** girl.’

‘But when you try to find a way to just be annoying about something, it’s just kind of weird,’ Bregoli told the outlet.

There is no suggestion Bregoli is lying about her enormous wealth. She recently bought a $6 million Florida home for cash from income generated on OnlyFans, which lets people subscribe to ‘creators’ x-rated content. 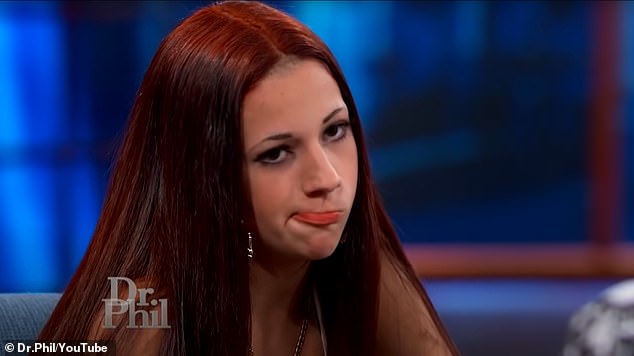 Iconic: She originally rose to fame at the age of 13 when she appeared in an episode of the Dr. Phil Show and challenged the audience to ‘catch me outside’

Bregoli charges $23.99-a-month for hers, has 1.57 million likes on the site, and can make even more cash by charging her subscribers for personalized content.

Bregoli first rose to fame when she was just 13 years old and appeared on the Dr. Phil show in an episode titled ‘I Want to Give Up My Car-Stealing, Knife-Wielding, Twerking 13-Year-Old Daughter Who Tried to Frame Me for a Crime.’

On the episode, Bregoli challenged laughing audience members to ‘Catch me outside, how about that?’ which was misheard ‘Cash me ousside, how bou dah?’ due to her heavily affected accent.

The phrase and the clip became a meme sensation and launched Bregoli into internet stardom. 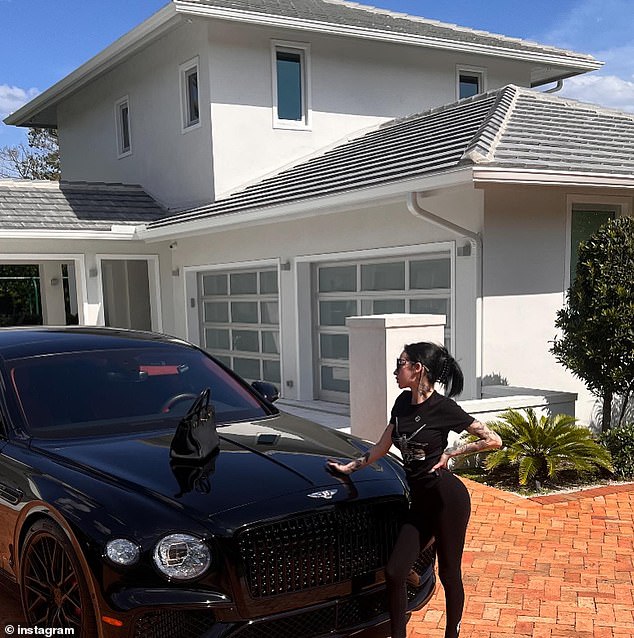 Life of luxury: Bregoli seen next to her Bentley at her new $6.1 million Florida mansion

‘I never wanted to be famous,’ she told Variety in 2021, ‘I was handed it. And instead of being an embarrassment and a joke for the rest of my life, I became something successful.’

Just one year after she went viral for her TV appearance, Bregoli received a record deal as a rapper from Adam Kluger at Atlantic Records and went on to star in the reality show Bringing up Bhabie in 2019. 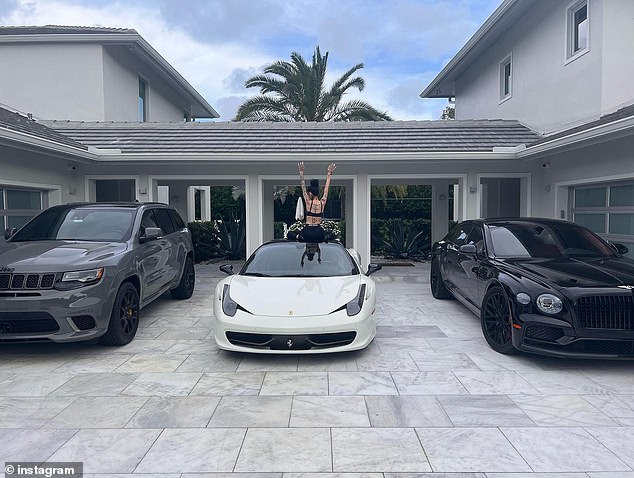 The home features a five-car garage and a fully appointed two-story guest house.

The primary residence is laid with porcelain floor-tiling, built-in Sonos and smart features throughout the house.

It also features a sauna, wine storage space, a pool and patio, a billiards room, and a chef’s kitchen complete with top-of-the-line appliances and a walk-in pantry.