Bidders are circling British Steel amid frantic efforts to find a buyer for the collapsed firm.

Ministers are understood to be pushing for a single buyer or consortium to take the business on – with up to 25,000 jobs at the company and its suppliers hanging in the balance.

An industry source said that several bidders have already registered expressions of interest, suggesting there is hope for a rescue.

Workers are pictured leaving the steelworks plant in Scunthorpe following the announcement that it today collapsed. Marc Meyohas of private equity firm Greybull Capital – which bought British Steel for £1 in 2016 – blamed uncertainty around Brexit for the loss of customers

British Steel failed after the Government refused to hand over a £30million to keep it going, which Business Secretary Greg Clark said would have been illegal under EU ‘state aid’ rules.

The steelmaker has now been taken out of the hands of Greybull Capital, the private equity company which bought it in 2015 for £1.

It is now under the control of the Official Receiver – which is part of the Insolvency Service.

Liberty said it is watching closely.

The company already owns a steel plant in Scunthorpe close to the main British Steel site.

Liberty bought Tata Steel Europe for £100million in February 2017, and was reported to be one of the shortlisted bidders for the Port Talbot plant in South Wales, which was temporarily put up for sale in 2016 before being taken off the market again.

A spokesman for Liberty Steel said: ‘We’re monitoring the situation and share the concerns of the whole UK steel industry about the future of the British Steel sites and the jobs there.’ Work is continuing as normal for now at British Steel’s plants in Scunthorpe and Teesside, and the Official Receiver is understood to be prioritising selling the entire business as a job lot.

But Tory MP Simon Clarke, who represents the constituency of Middlesborough South and East Cleveland, said some bidders might prefer to buy some of the better-performing parts rather than the entire plant.

He said: ‘The Government’s focus is quite rightly on preserving the whole of British Steel and selling it as one enterprise.

‘In any scenario, however, I am determined to preserve the specialist plant at Skinningrove, which is a world-leading facility.’ Mr Clarke and another local MP – Labour MP Nic Dakin – also warned that decommissioning the sprawling Scunthorpe site could cost hundreds of millions of pounds.

Redeveloping another closed steel plant, the SSI site in Redcar which shut in 2015, has cost taxpayers £137milllion so far. 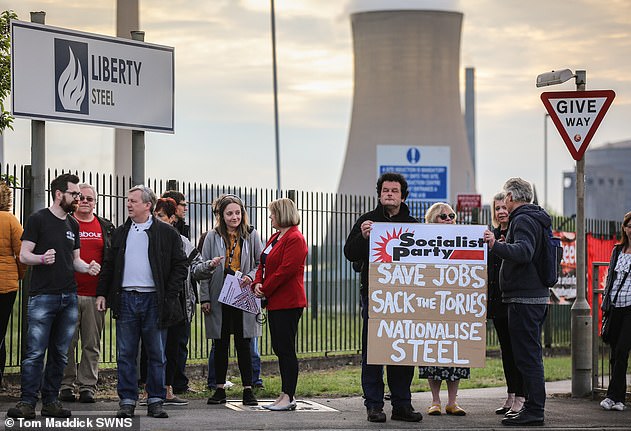 Steel workers protest outside British Steel in Scunthorpe this morning following yesterday’s announcement that the firm had collapsed into insolvency. Companies including London-based Liberty Steel are said to be thinking of bidding, with a spokesman saying they were ‘monitoring the situation’

Mr Dakin said: ‘It will cost hundreds of millions of pounds cleaning up the site.

‘It’s massive, the site is pretty much as large as the town of Scunthorpe – it’s bigger than the borough of Kensington and Chelsea.

‘It’s a large industrial site that will need to be kept safe when things aren’t being used there.’ A meeting will be held today by Tees Valley Mayor Ben Houchen with MPs and council leaders.

Mr Houchen has been damning about Greybull’s involvement in British Steel, branding them ‘complete sharks’ on Facebook.

But Greybull’s managing partner Marc Meyohas said his firm had done everything possible to avoid the collapse of British Steel.

He told the Financial Times: ‘We took a very challenging and important turnaround when nobody else wanted to, we arranged £500m to invest in the business, we hired a new management team and the turnaround was starting to show success.’ Mr Meyohas blamed uncertainty around Brexit for the loss of customers.

‘He is also working hard to secure a future for the company and is actively seeking buyers for the business.’ Endless did not respond to a request for comment.

Business Secretary Greg Clark said: ‘In the days and weeks ahead, I will be working with the Official Receiver and a British Steel support group of management, trade unions, companies in the supply chain and local communities, to pursue remorselessly every possible step to secure the future of the valuable operations in sites at Scunthorpe, Skinningrove and on Teesside.’