Biden, 76, drives more than a HUNDRED miles per hour while drag racing against Colin Powell’s son

Joe Biden raced Colin Powell’s son in an episode of comedian Jay Leno’s car show, with the president pushing his beloved Corvette to over 100mph while drag racing.

The president whizzed around at astounding speeds of 118mph in front of the camera, while he admitted that he missed being able to drive himself around while living in the White House.

Biden also appeared in Leno’s car-centric television show while he was vice president, in October 2016.

The president, who frequently discusses his love of cars, raced Colin Powell in that episode – before he died October last year at the aged 84.

In 2016, Powell lost the race to Biden, and Michael, 59, said he intended to avenge his father.

‘I’m frankly here to settle the score,’ said Michael. ‘For years he was very bitter. He said he had won the race, but it was lost in editing. And he said that if I ever had the chance, I had to make that right.’

Joe Biden is seen in an episode of Jay Leno’s show, racing Colin Powell’s son Michael. The race is a revisiting of a 2016 contest, when Biden raced Colin Powell himself – and won 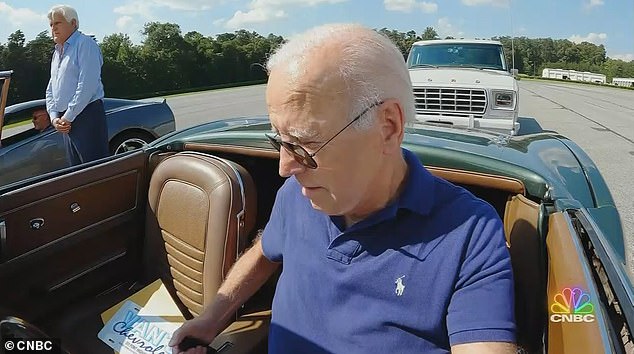 The president is seen on the starting line, as Leno stands in the middle of Biden’s Corvette and Michael Powell’s 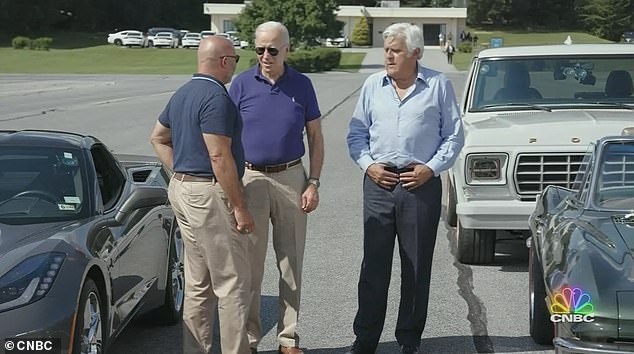 Biden, Michael Powell and Leno size each other up ahead of the race 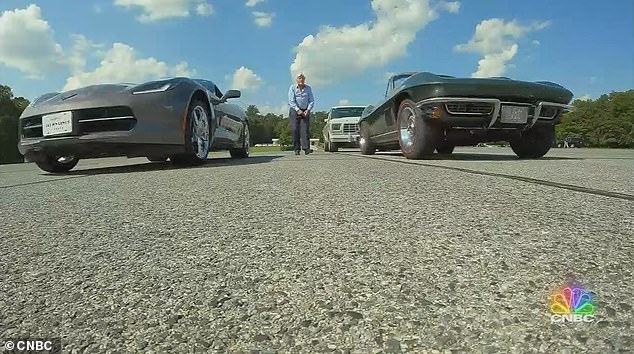 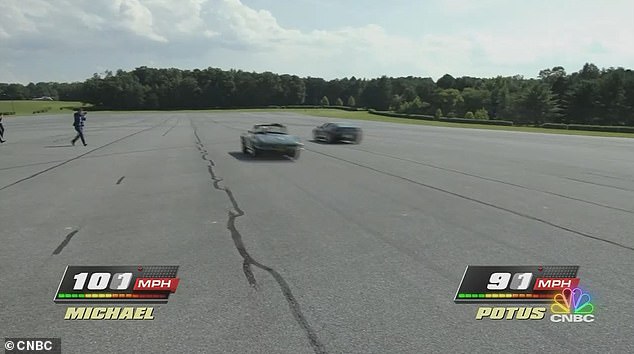 The cars take off in a blue, with Biden’s 1967 car (left) seemingly outpaced by the much newer version

Michael was driving a 2015 Corvette with 455 horsepower V8 engine and eight-speed automatic transmission, worth $55,000.

Leno starts the pair racing, and the president pushes the vehicle to 118 miles per hour, looking calm and composed in his convertible.

The Secret Service agents look on nervously. ‘Uh oh, I am in so much trouble,’ Leno jokes.

They diplomatically declined to declare a victor, but Powell’s car was significantly ahead.

Biden told Leno he regretted no longer being free to drive his car.

‘Every once in a while I take the Corvette out of the garage and just run up and down the driveway.’

The president and Leno, both self-professed ‘car guys,’ then gush over electric vehicles while driving the new electrified classic F-100 truck. 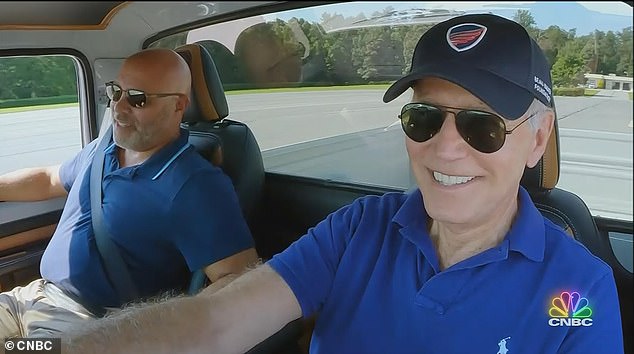 The president also took Michael Powell for a spin in a new electric Ford, while praising advances in EV technology 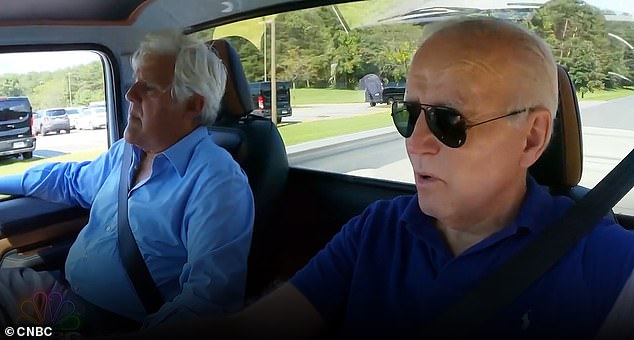 ‘I miss it,’ Biden told Leno of driving. ‘Every once in a while I take the Corvette out of the garage and just run up and down the driveway’

Biden also told of how he worked with car unions to make sure they would not be left out of the transition to electric vehicles.

‘I’m a labor guy and I think organized labor has gotten screwed,’ Biden says as he drives the truck while Leno rides in the passenger seat.

He touted the EV charging station funds included in the Bipartisan Infrastructure Law.

‘So now labor across the board is realizing this is the answer to their financial security and they’re doing something good,’ Biden said.

Biden has frequently noted that the Bipartisan Infrastructure Law, the American Rescue Plan and the CHIPS Plus act together have put over $135 billion toward electric vehicle manufacturing.

‘It’s a game-changer. You got 40 percent of all pollution — all the CO2 going up — is from the tailpipe. And imagine if we just changed that,’ the president said. 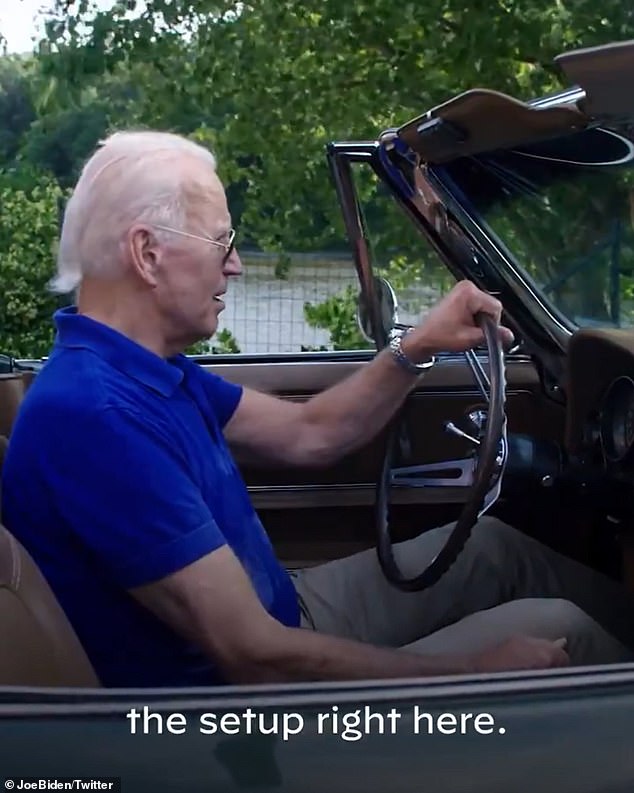 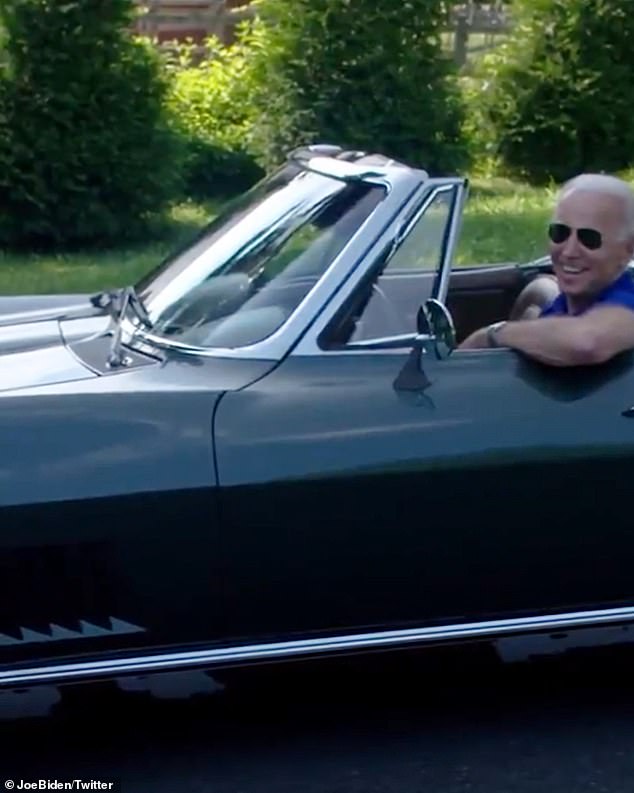 ‘I’m trying to get my miles in before the Secret Service stops me,’ he captioned it

But electric vehicles require electricity to run and only about 20 percent of U.S. electricity comes from renewable energy, according to the Energy Department.

Biden promised that number would swell with new developments in wind energy.

‘We’re going to be in a position where we’re moving toward wind power in this country in a gigantic way,’ Biden told Leno.

‘What’s happening is you now have battery capacity that you can have in your basement so when the wind stops blowing the sun stops shining it keeps you going.’

New standards for the 500,000 charging stations stipulate that they must be placed at 50-mile intervals along interstate highways and must be within one mile of the highway for ease of access.

The first round of funding for the project went out last month.

Electric vehicle sales have doubled since Biden took office but still make up a small portion of all vehicles on the road – only about 1 percent of the 250 million cars, trucks and SUVs in use in the U.S. today.