The Biden administration quietly announced a change in its student debt forgiveness program on Thursday that could exclude up to 4 million borrowers with loans owned or backed by private companies.

The u-turn by the federal government comes after the first legal challenges were filed to the policy and following criticism of the huge costs to taxpayers. Critics also claimed the plan is an illegal use of President Joe Biden’s executive power.

The Education Department announced that privately-held loans won’t qualify for the relief plan, which the Congressional Budget Office said earlier this week could cost $400billion over a decade.

The scale back on Perkins and Federal Family Education Loans – which are bank loans backed by federal guarantees – is over concerns the companies could challenge the Biden administration in court, Politico reported.

They used to be a major component of federal student loans, but were stopped in 2010 after a major Obama administration overhaul shifted to direct government loans.

The administration had initially allowed those with FFEL loans to reorganize so they were eligible to receive the $10,000 to $20,000 of relief per borrower.

But as of Thursday, those who hadn’t made the changes were no longer able to benefit.

According to the report, the businesses that hold the loans are the greatest legal threat to the program.

They face losses as borrowers consolidate their loans and move them to one owned directly by the government.

The initial policy stated that FFEL and Perkins loans qualified.

The Department of Education guidance updated on Thursday stated: ‘As of Sept. 29, 2022, borrowers with federal student loans not held by ED cannot obtain one-time debt relief by consolidating those loans into Direct Loans.’

The Department is ‘assessing’ whether ‘there are alternative pathways to provide relief’ to these borrowers, and is ‘discussing this with private lenders,’ it said.

An Education Department spokesperson said: ‘Our goal is to provide relief to as many eligible borrowers as quickly and easily as possible, and this will allow us to achieve that goal while we continue to explore additional legally-available options to provide relief to borrowers with privately owned FFEL loans and Perkins loans, including whether FFEL borrowers could receive one-time debt relief without needing to consolidate .’

Experts told NPR that private banks who were subject to losing business could potentially sue to stop the loan forgiveness program by claiming they suffered harm. 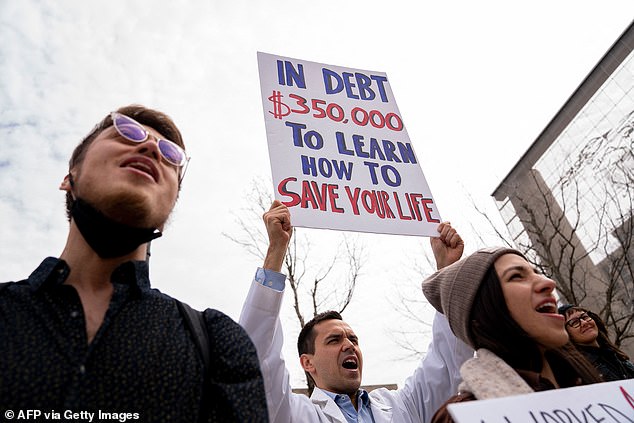 The plan allows tens of millions of borrowers to wipe away $10,000 in student loan debt. Pell grant recipients can get $20,000 in relief

The first lawsuit against the program, filed this week, relied on a plaintiff who demonstrated harm by residing in one of six states where loan forgiveness is taxed like income – a move that will leave people on the hook for a tax bill even while saving thousands in debt.

The government has already countered that the program is voluntary, and the plaintiff can forego the $20,000 in relief.

A second suit, filed Thursday by six GOP-led states, challenges the program by citing President Joe Biden’s comment to ’60 Minutes’ that the pandemic is ‘over.’

Biden has used the pandemic multiple times to extend the March 2020 student loan moratorium first put in place by Donald Trump. He extended it a final time through the end of December to give people time to transition back to repayment.

The moves in the courthouse come as the price tag of the plan is still coming into focus, with a new Congressional Budget Office estimate this week saying the plan to cancel student loan debt will cost $400 billion over a decade.

The White House attempted to downplay the hefty price tag with a memo pointing out that the estimate is based on 90 percent of eligible people enrolling in the program – far more than administration officials projected.

‘CBO called its own estimate ‘highly uncertain.’ We agree,’ the White House said.

‘CBO assumes that 90% of eligible borrowers take the necessary steps to claim relief. We would be thrilled if 90% of eligible middle- and low-income Americans applied for this program. But unfortunately, that’s unlikely based on the data from other programs.’

Chief of Staff Ron Klain tweeted this week: ‘If you want apples-to-apples, note that this is a THIRTY year score; most often, CBO estimates a program’s cost over its first TEN years.’

And Vermont Senator Bernie Sanders, a self-proclaimed Democratic Socialist, hit back at renewed GOP criticism of the bill in comments to Newsweek.

‘I didn’t hear the Republicans worry about the deficit when they provided a trillion dollars in tax breaks to the 1%, large corporations,’ Sanders said on Thursday morning.

Six Republican-led states filed suit in federal court Thursday trying to knock down President Biden’s plan to provide up to $20,000 to individuals in student loan relief – by citing the president’s own words calling the pandemic ‘over.’

The states are suing to halt the administration’s plan to forgive student loan debt for tens of millions of Americans, accusing it of overstepping its executive powers.

It’s at least the second legal challenge this week to the sweeping proposal laid out by President Joe Biden in late August, when he said his administration would cancel up to $20,000 in education debt for huge numbers of borrowers.

Another suit, filed Tuesday, relies on a plaintiff who is eligible for $20,000 in relief – but doesn’t want to get stuck with the tax liability for paying it off. Six states subject loan forgiveness to taxation.

The moves in the courthouse comes as the price tag of the plan is still coming into focus, with a new Congressional Budget Office estimate this week saying the plan to cancel student loan debt will cost $400 billion over a decade.

The loan announcement, after months of internal deliberations and pressure from liberal activists, became immediate political fodder ahead of the November midterms while fueling arguments from conservatives about legality.

In the lawsuit, being filed Thursday in a federal court in Missouri, the Republican states argue that Biden’s cancellation plan is ‘not remotely tailored to address the effects of the pandemic on federal student loan borrowers,’ as required by the 2003 federal law that the administration is using as legal justification.

They point out that Biden, in an interview with CBS’ ’60 Minutes’ this month, declared the Covid-19 pandemic over, yet is still using the ongoing health emergency to justify the wide-scale debt relief.

‘It’s patently unfair to saddle hard-working Americans with the loan debt of those who chose to go to college,’ Arkansas Attorney General Leslie Rutledge, who is leading the group, said in an interview.

She added: ‘The Department of Education is required, under the law, to collect the balance due on loans. And President Biden does not have the authority to override that.’ 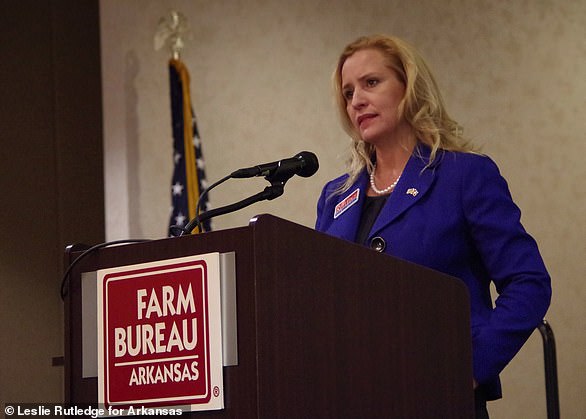 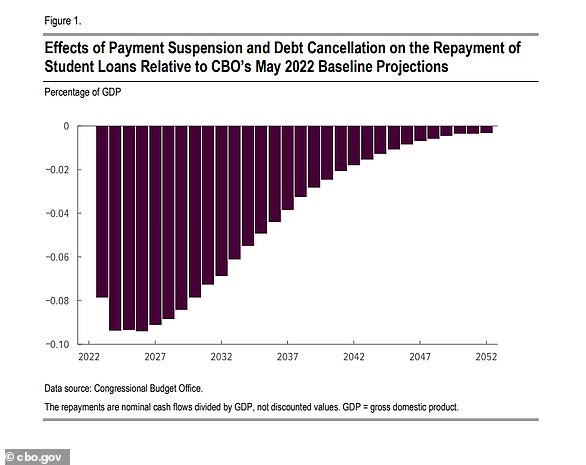