The Biden administration has already sent five Mi-17 helicopters, more than two thousand Javelin anti-tank missiles and 70 Humvees along with 40 million rounds of ammunition to Ukrainian fighters along with hundreds and hundreds of small arms, according to a list obtained by DailyMail.com.

With Ukraine desperately trying to hold off Russian invaders it reveals just how much military aid has been delivered from Pentagon stores already.

President Joe Biden unveiled a further package to help Ukraine on Wednesday, including 9,000 anti-armor systems, drones and 7,000 small arms – but he remains under pressure to do even more, including helping Poland deliver its MiG-29 fighter jets.

While other nations have trumpeted their arms deliveries, the Pentagon has been tight lipped for fear of divulging too much about Ukrainian capabilities.

But a list circulated to Congress, and later published by the White House, details the assistance sent by the U.S. so far:

Stinger missiles have helped prevent Russia claiming air superiority over Ukraine. Instead, its air force has launched cruise missiles inside Russian air space rather than risk being shot down

Senior Pentagon officials say Russia has failed to establish air supremacy over Ukraine. Part of the reason is that they are launching cruise missiles inside their own airspace for fear of coming into range of Stinger missiles.

The are infrared homing surface-to-air missiles that can be shoulder-fired.

It carries an explosive warhead that can accelerate to twice the speed of sound, and can hit targets almost three miles away.

They have been in production since 1981.

They came to worldwide prominence in the mid 1980s when the Afghan Mujahideen credited them with downing hundreds of Soviet aircraft, hobbling Moscow’s war machine and forcing the eventual Soviet withdrawal. 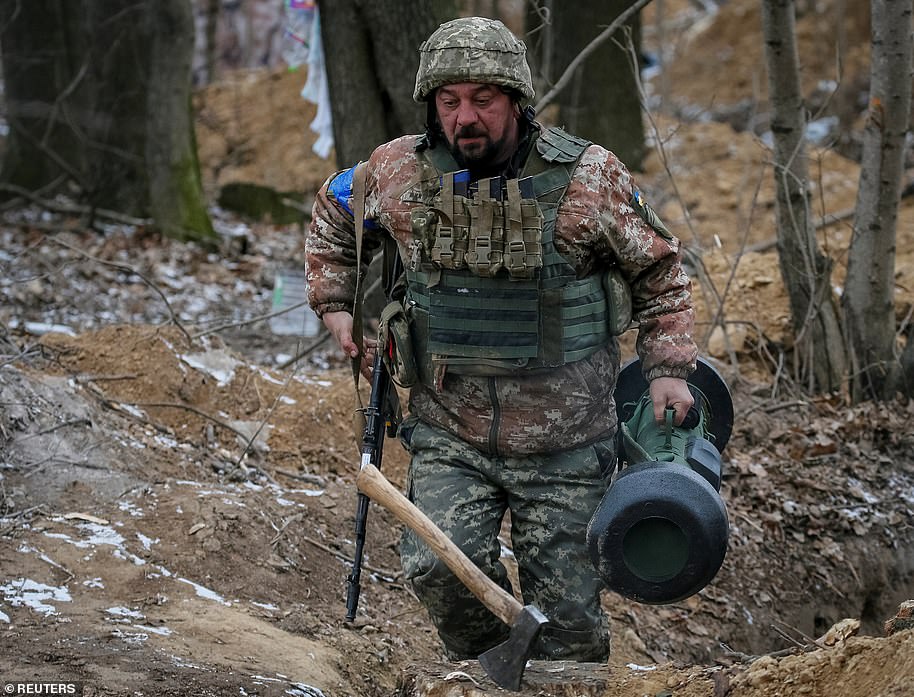 A Ukrainian service member carries a Javelin missile system at a position on the front line in the north Kyiv region. Javelins have helped halt a Russian armored advance on Kyiv 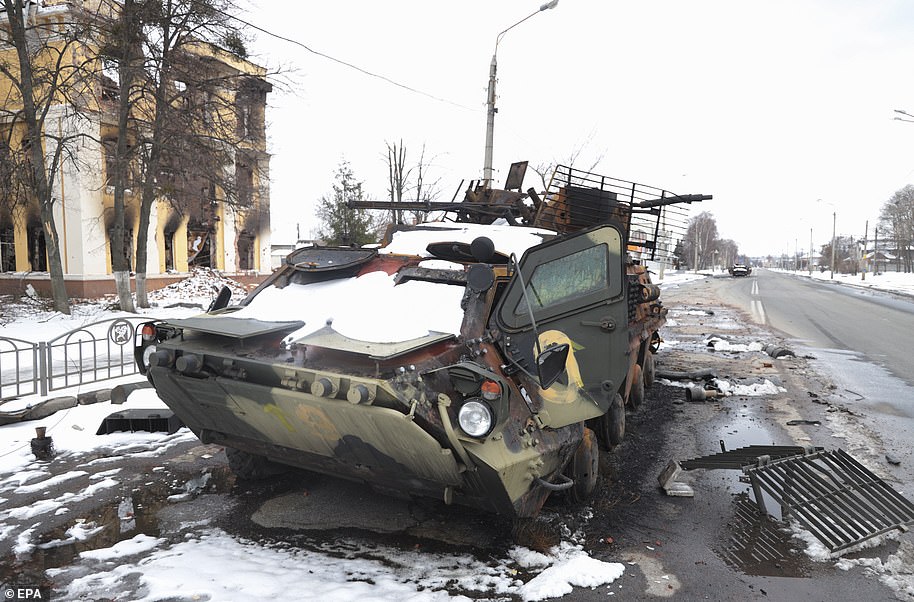 Mobile Ukrainian squads with Javelin anti-tank weapons have been able to stop armored vehicles in their tracks, like this burned-out APC in Kharkiv

Part of that is down to their agility and speed, and part of it is due to their use of Javelin rockets.

It has a fire-and-forget design that allows operators to slip away into cover while the rocket uses infrared technology to home in on its target. It also has the ability to arrive from above, where tanks have the thinnest armor.

Such has been the impact of the Javelin that it features in a viral meme that depicts it as ‘Saint Javelin,’ protector of Ukraine, and as an icon borne by Mary Magdalene. 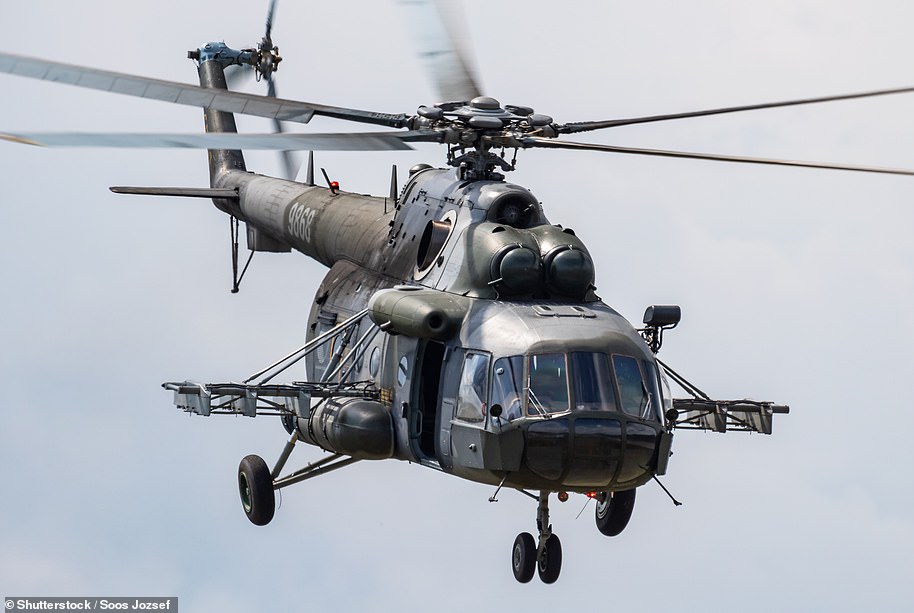 Five Russian-made Mi-17 helicopters have been transferred from the defunct Afghan Air Force to Ukraine, probably for use as transports

This Russian-made helicopter has been in production since 1975, and are found all around the world.

They were used by the Afghan Air Force and five were withdrawn last year, as part of the U.S. draw down, and delivered to Ukraine, where pilots are familiar with Soviet-era aircraft.

It is used mostly as a transport but there are armed gunship versions in use around the world. 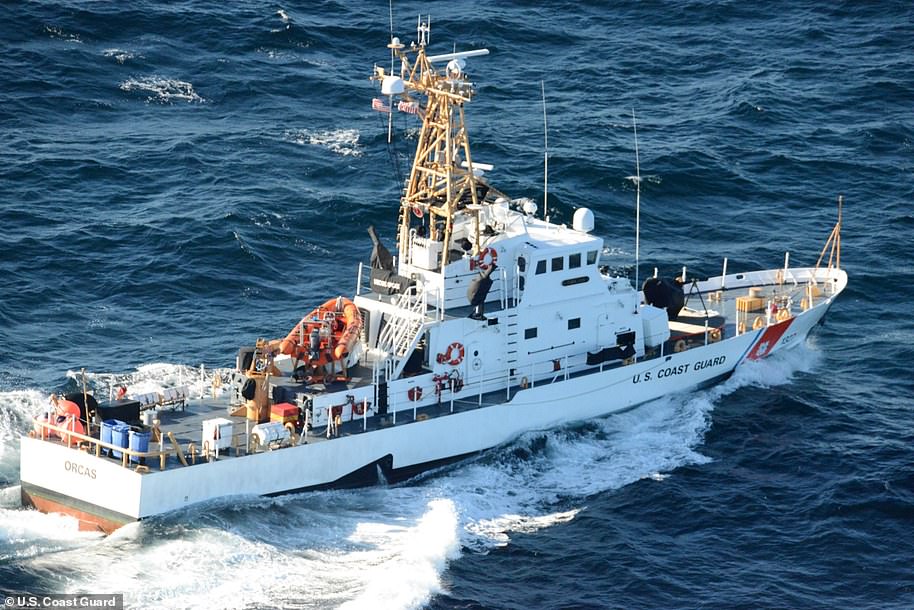 The two Island-class cutters have a top speed of almost 30 knots and Reuters reported at the time that Ukrainian sailors had already been trained on the vessels in the U.S.

On Wednesday, Biden revealed they were ‘armed.’

Counter-battery radar can locate hostile batteries up to about 30 miles away depending on weather and terrain.

No further details were revealed about the systems, other than they also include devices to counter Russian drones.

Along with the bigger weapons, the U.S. has sent 200 grenade launchers with grenades, 200 shotguns, and 200 machine guns.

In all, it has supplied almost 40 million rounds of small arms ammunition and more than one million grenade, mortar and artillery rounds.

70 Humvees and other vehicles 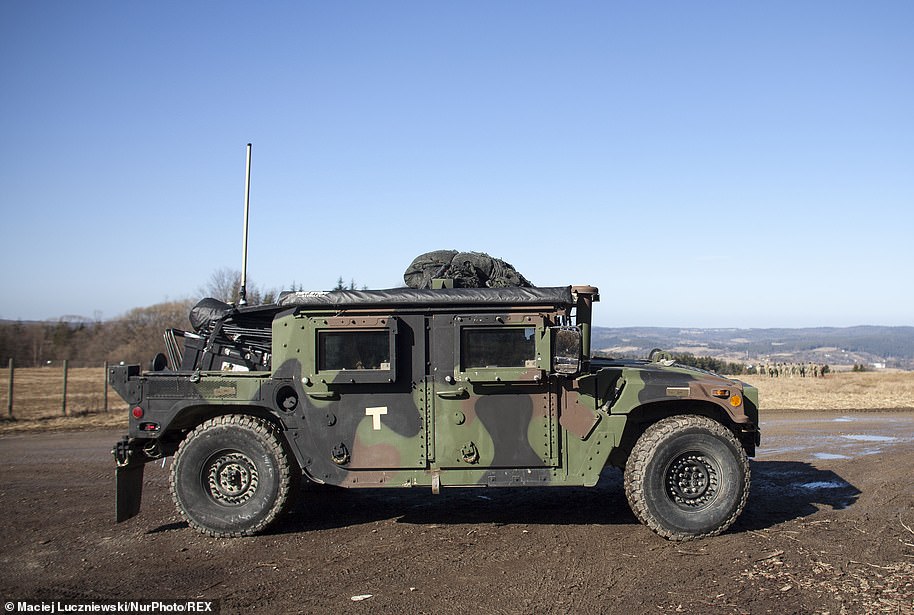 70 Humvees have been sent to Ukraine, along with dozens of other vehicles as Ukraine mounts hit and run defenses of its major cities

The High Mobility Multipurpose Wheeled Vehicle is a highly mobile, high-performance, air-droppable family of tactical vehicles. It is better known as the Humvee.

It has been in service with the U.S. military since 1983, and fully loaded has a top speed of 55 miles per hour.

At least 35 arrived in a shipment last year, and in total some 70 Humvees have been sent to Ukraine.

And it also hints at intelligence sharing, listing ‘satellite imagery and analysis capability.’

Already the U.S. has delivered some $1 billion in assistance – and there is more to come. 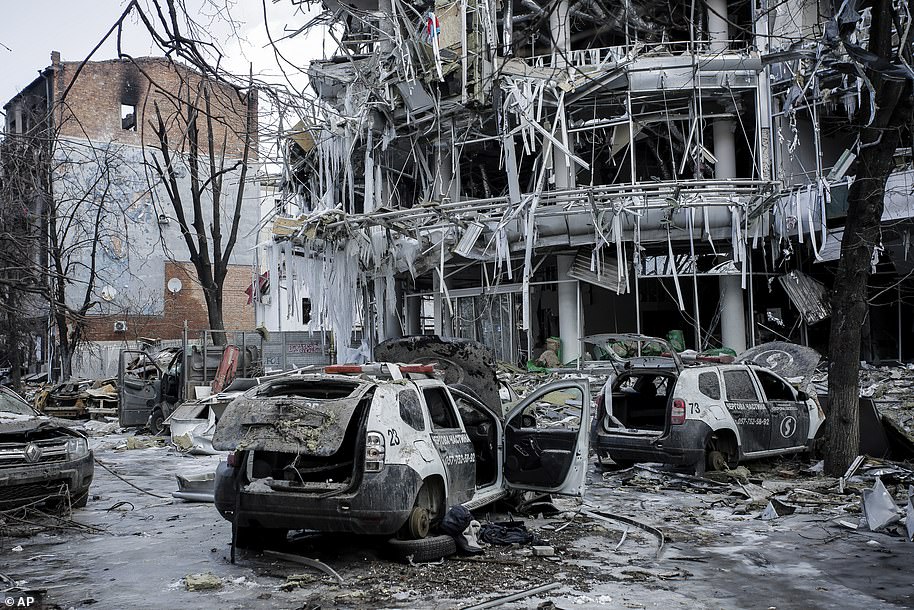 ‘Deliveries of security assistance are ongoing, and we are working to expedite deliveries of additional equipment as quickly as possible,’ said the fact sheet.

‘Over the past two weeks alone, the United States has delivered more than $250 million of security assistance to Ukraine. The administration is prepared to approve additional support to Ukraine’s frontline defenders in the coming days.’

A day earlier Biden signed a funding bill that included another $3 billion in arms and military aid for Ukraine.

And on Wednesday, he described the impact of the weapons he had already sent.

Earlier Ukrainian President Volodymyr Zelensky delivered a heartfelt plea to Congress for more help, saying his country was  going through its own version of September 11th and Pearl Harbor every day.

He also demanded that President Joe Biden become the ‘leader of the free world’, by imposing more sanctions on Russia and sending fighter jets.

Supplying arms to Ukraine has been a largely bipartisan cause, as lawmakers rally around the country’s heroic fight against Russia.

But Democrats and Republicans have at times urged the administration to go further and faster, by imposing a no-fly zone or supplying jets.

‘Immediately deliver additional Stinger missile systems and munitions to the Ukrainian armed forces and engage with allies and partners to deliver Soviet- or Russian-made strategic and tactical air defense systems and associated radars to Ukraine,’ they wrote.

‘This should be followed by discussions regarding near-term U.S. force posture moves to mitigate air defense shortfalls in such allied and partner countries and eventual backfill with like capabilities.’ 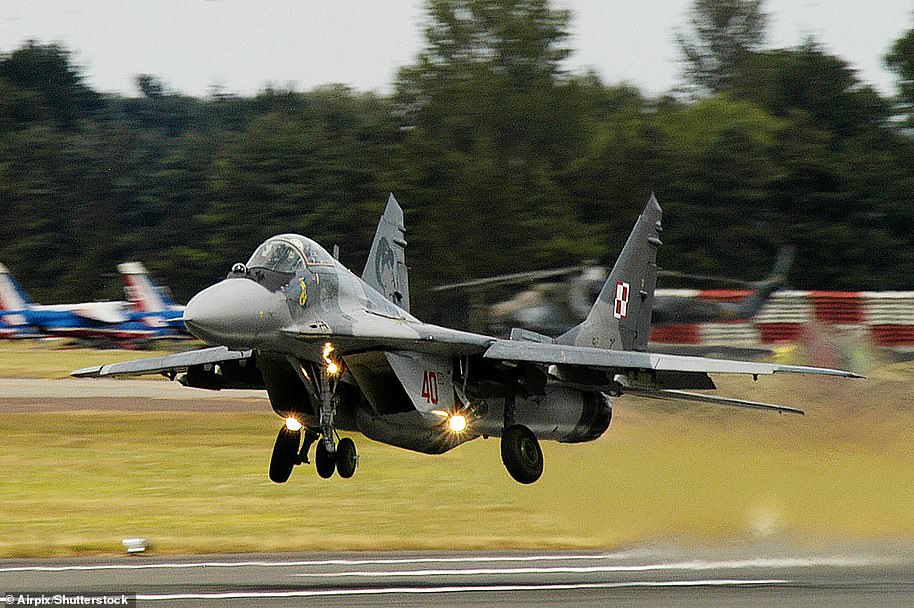 Republicans have asked the administration to think again about helping Poland send its MiG-29 fighter jets to Ukraine, after Washington vetoed the proposal last week 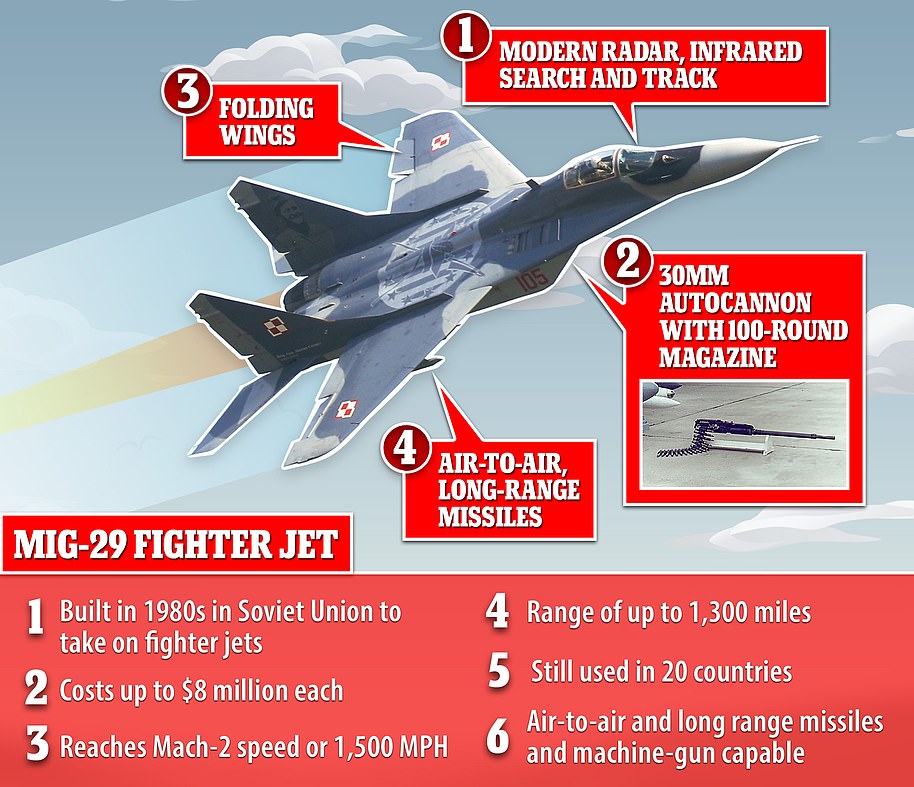 However, Biden has ruled out such a move, warning it would directly pit N.A.T.O.pilots against Russian pilots in combat.

They wrote that Ukraine had enjoyed success with weapons delivered so far – with the Pentagon assessing that much of the Russian advance had been stalled for days.

‘This has been particularly evident for anti-tank and anti-air weapons systems,’ they wrote.

‘The expenditure rate for such munitions is high.

‘As the invasion drags on, Russia will reorganize, resupply, consolidate its forces, and modify its tactics in an attempt to violently accelerate its advances.

‘Ukrainian forces will likely have to expend munitions from these and other weapons at an increasing rate—meaning the need for restocking will only grow more urgent with each passing day.’