Joe Biden has a 13-point lead over President Trump in Pennsylvania, a state the president turned red in 2016, but is the presumptive Democratic nominee’s birthplace.

A Monmouth University poll released Wednesday shows Biden with the support of 53 per cent of Pennsylvania’s registered voters, while 40 per cent support Trump.

Despite Biden’s commanding lead, Pennsylvanians are evenly divided, 46-to-45 per cent, on whether they think Trump or Biden, respectively, will win the commonwealth because 57 per cent believe so-called ‘secret’ Trump voters could put the state in the president’s column for a second time in a row.

Joe Biden has a 13 point lead among registered voters in Pennsylvania, a new Monmouth poll found. Biden was born in the state and visited his childhood home in Scranton last week 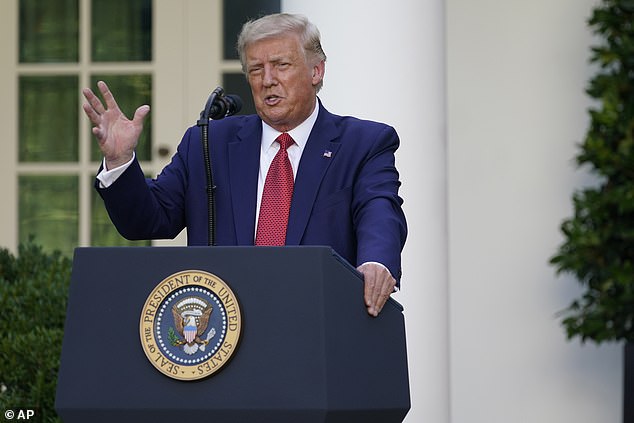 A majority of Pennsylvania voters believe ‘secret’ supporters of President Trump (pictured) exist in their state. Voters in the commonwealth clinched the White House for Trump in 2016 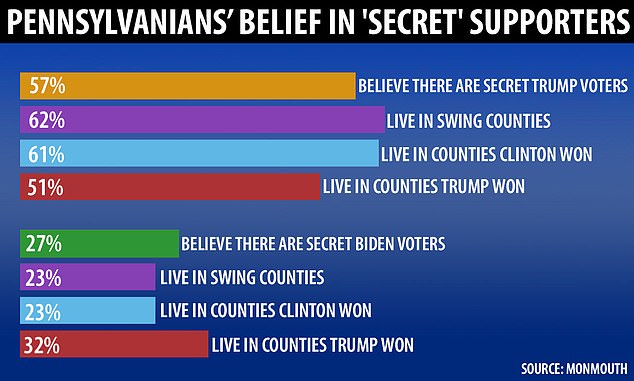 The president himself suggested the possibility when asked Tuesday in the White House Rose Garden if he expected to lose the November race.

It was Trump’s win in Pennsylvania in 2016 that put him over the top in the Electoral College. The state’s Electoral votes hadn’t gone to a Republican since 1988.

Another batch of surveys back up the Monmouth poll, showing Biden with a eight-point lead in Pennsylvania – and leading Trump in five other key states: Arizona, Florida, Michigan, North Carolina and Wisconsin, according to polling from CNBC/Change Research.

The Pennsylvania CNBC poll had the widest margin between the two candidates and North Carolina the most slim, with Biden only beating Trump by one point.

That polling also shows that Trump had a lead in Pennsylvania until early June.

Monmouth data points to the president’s coronavirus response as a potential cause – with a majority, 56 per cent, saying Trump did a bad job handling the crisis.

In today’s hyper-partisan political environment, both candidates are rated unfavorably by a big batch of Pennsylvania voters, but the president’s marks are worse.

Forty per cent of Pennsylvania voters have a favorable opinion of Trump, while 54 per cent – a majority – view him unfavorably. Forty-seven per cent said they held ‘very unfavorable’ views of the commander-in-chief.

The demographic splits are similar to other recent polling, showing the president doing more poorly than a traditional Republican with voters over age 65.

Biden has a 10-point advantage with that group in the Keystone State: 52 per cent to 42 per cent.

Biden has a 60-point advantage among voters who are black, Hispanic, Asian or from other racial groups.

White voters are split by education level when it comes to Biden or Trump preference.

White voters with college degrees are more prone to support Biden: 61 per cent to 34 per cent.

While white voters who didn’t go to college prefer Trump: 55 per cent to 39 per cent.

When they looked at a scenario where turnout increases in 2020 from 2016, Biden beats Trump 52 per cent to 42 per cent in the state. If fewer Pennsylvanians show up to the polls, Biden still beats Trump, but by only seven points – 51 per cent to 44 per cent.

‘The good news for Biden is that he hits the magic 50 per cent mark in all the turnout models and far fewer voters are considering a third-party candidate than four years ago,’ said Patrick Murray, director of the Monmouth University Polling Institute.

But Pennsylvania voters are skeptical after Trump’s suprise win in the state four years ago.

‘The media consistently reports that Biden is in the lead, but voters remember what happened in 2016. The specter of a secret Trump vote looms large in 2020,’ Murray said.

The poll has a plus or minus 4.9 per cent margin of error.