Biden insists the US is still focused on counterterrorism in Afghanistan in G20 meeting, but doesn’t mention the Taliban once

President Joe Biden discussed counterterrorism in Afghanistan with world leaders on Tuesday morning but – in a sign of uncertainty about how to deal with the country’s new rulers – the White House did not refer to the Taliban in a readout of the call.

G20 leaders on the call also agreed to deliver humanitarian aid to Afghans and protect the rights of women and girls.

‘The leaders discussed the critical need to maintain a laser-focus on our enduring counterterrorism efforts, including against threats from ISIS-K, and ensuring safe passage for those foreign nationals and Afghan partners with documentation seeking to depart Afghanistan,’ said the White House in a statement referring to the local affiliate of the Islamic State.

‘The leaders also reaffirmed their collective commitment to provide humanitarian assistance directly to the Afghan people through independent international organizations, and to promote fundamental human rights for all Afghans, including women, girls, and members of minority groups.’

The Biden administration has taken pains not to take a stand on the Taliban since it took power, preferring to repeat that it will be judged by its actions not its words 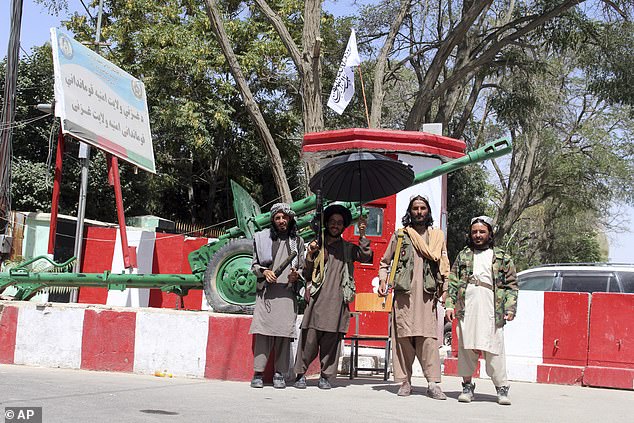 The Taliban swept into the capital of Afghanistan in August as U.S. troops withdrew, leading to the collapse of the country’s government as local troops melted away 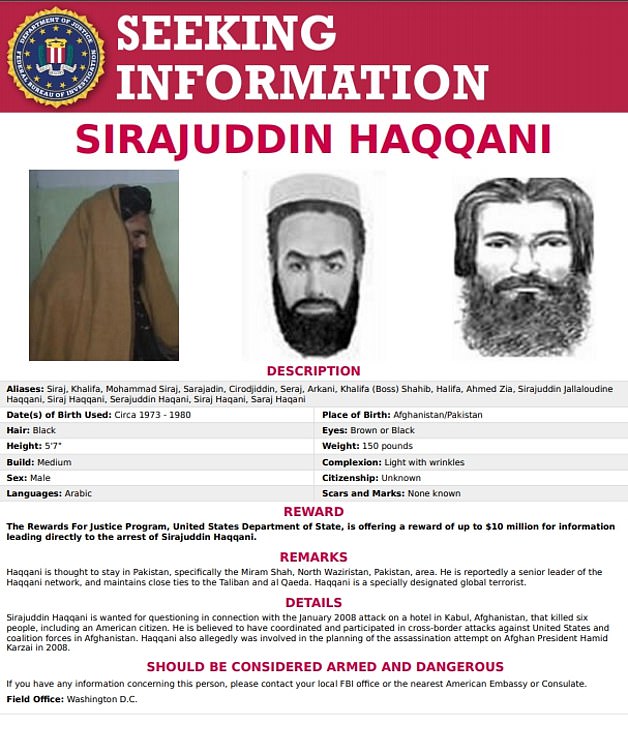 Afghanistan’s new interior minister, Sirajuddin Haqqani, has a $10 million U.S. bounty on his head and is wanted for an attack on a Kabul that killed six people, including an American

ISIS-K has been a troubling presence in Afghanistan since about 2015.

It claimed responsibility for the suicide attack that killed almost 200 people – including 13 American service members – during the final, chaotic days of the U.S. withdrawal.

But experts say its impact and reach are dwarfed in the country by the Taliban, which fought U.S. troops for 20 years.

Its new government includes terrorists wanted by the FBI.

For example, Sirajuddin Haqqani, head of the network believed to be responsible for many of the suicide attacks in Kabul in recent years, is now the Taliban’s interior minister.

His presence is just one of the thorny issues that foreign governments must navigate if they are to continue rescuing citizens and Afghan allies, while ensuring the supply of aid to a country broken by two decades of conflict.

The problem of how to deal with Afghanistan was clear from who was on the call and who was not.

China and Russia, both members of the exclusive club of the world’s 20 major economies, did not take part.

They have made clear they will not join Western nations who want to put conditions on aid in order to keep the Taliban in line.

At the same time, other leaders are grappling with whether to recognize Afghanistan’s new hardline rulers.

The Biden administration has been at pains to avoid casting judgement on an Islamist movement known for its brutality.

At the weekend, the State Department characterized talks with its representatives in Doha, Qatar as constructive.

‘The discussions were candid and professional with the U.S. delegation reiterating that the Taliban will be judged on its actions, not only its words,’ it said.

That stance has angered human rights groups which have already begun documenting brutalities against Afghanistan’s minority groups, such as the Shia Hazara community, and recording how women are being told to stay at home.

That presents governments with a dilemma if they want to help Afghans.

Italian Prime Minister Mario Draghi, who hosted the call, said the G20 would have to maintain contact with the Taliban government but that was not the same as formally recognizing it.

‘It is very hard to see how you can help people in Afghanistan without involving the Taliban,’ he said after the virtual summit.