President Joe Biden is being slammed for still allowing flights from South Africa to land in the US as his top health expert said he ‘wouldn’t be surprised’ if the new super mutant variant Omicron strain was already in US after one-in-ten passengers who landed in Holland from Johannesburg had Covid.

The Dutch health ministry said Saturday that at least 61 new cases of Covid entered the Netherlands from South Africa, leading Dr Anthony Fauci to sound the alarm about the dangers Omicron poses to Covid-weary US residents.

‘It has a large number of mutations, particularly in that area of the virus that relates to its ability to bind to the cells in your nasal pharynx and in your lung,’ Fauci told the Today Show Saturday morning.

‘You have to be careful and assume that that’s the case,’ he added, noting that Omicron could possibly ‘evade’ vaccinations.

Fauci’s concerns about ‘transmissibility’ come as Biden has imposed a ban on travelers from from eight African countries – Botswana, Zimbabwe, Namibia, Lesotho, Eswatini, Mozambique and Malawi – which won’t go into effect until Monday.

US citizens and green card holders from other regions of South Africa will still be allowed to travel to the US.

The CDC has yet to identify any cases of the new Covid strain in the US but the UK has said there two people have been diagnosed with the Omicron variant.

Dr Anthony Fauci said he ‘wouldn’t be surprised’ if it the new Covid variant Omicron was already in US. On the Today Show Saturday morning he said that he’s concerned about the ‘transmissibility’ but there were still a lot of unknowns

How concerned should the U.S. be about the new COVID-19 variant, Omicron? Dr. Anthony Fauci says he “wouldn’t be surprised” to find the variant already in the country. pic.twitter.com/Mp13hYxxWW 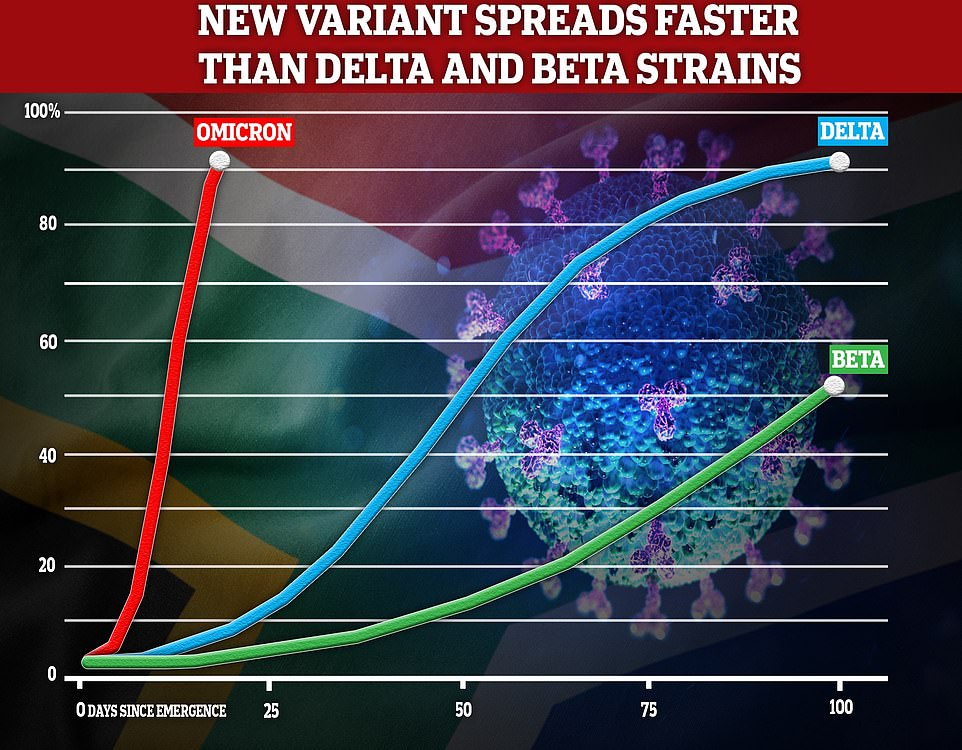 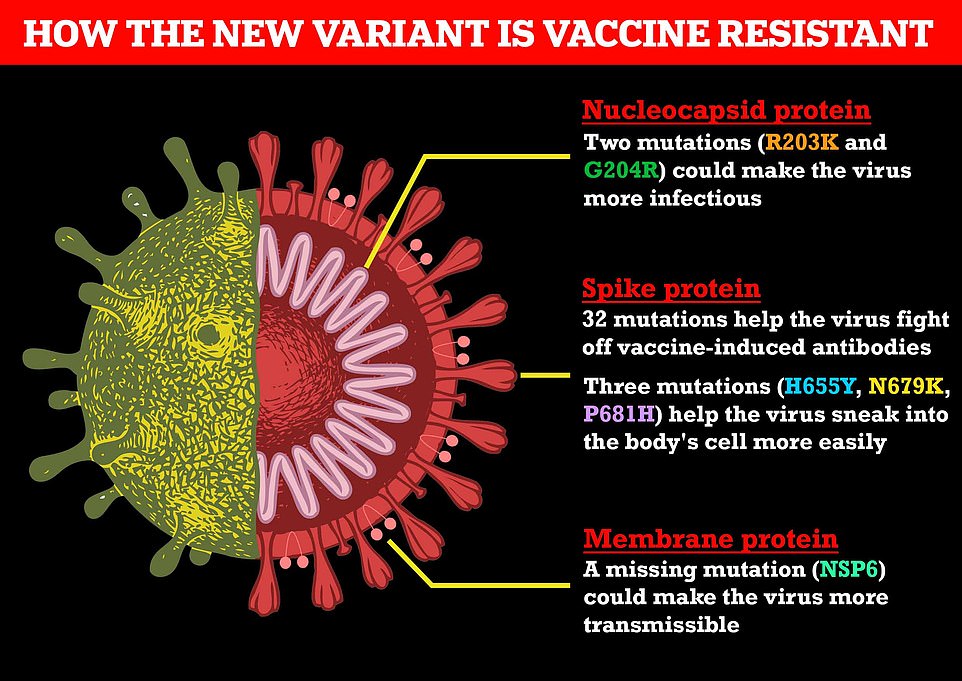 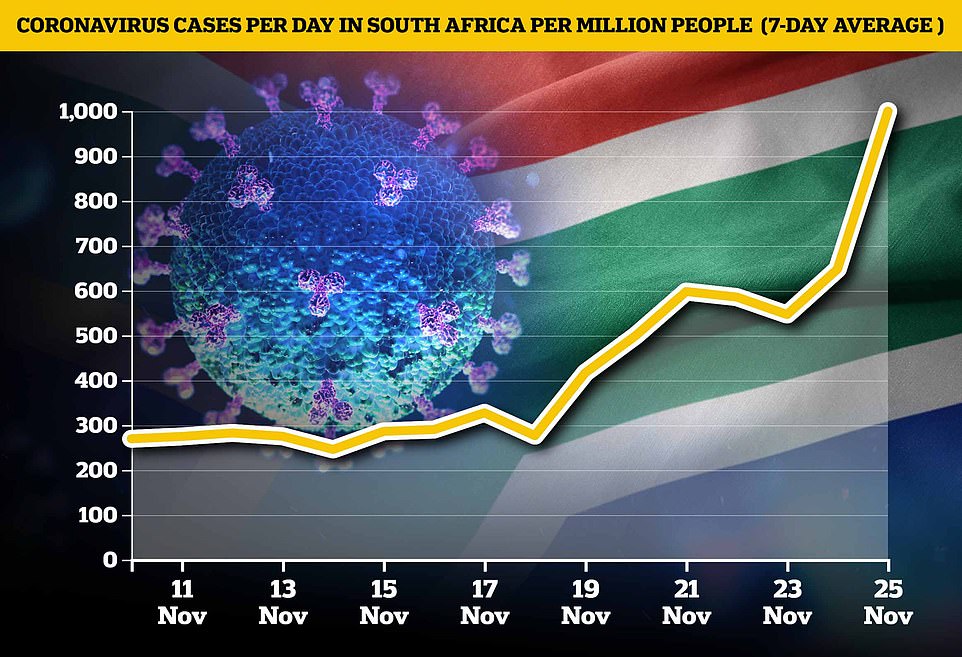 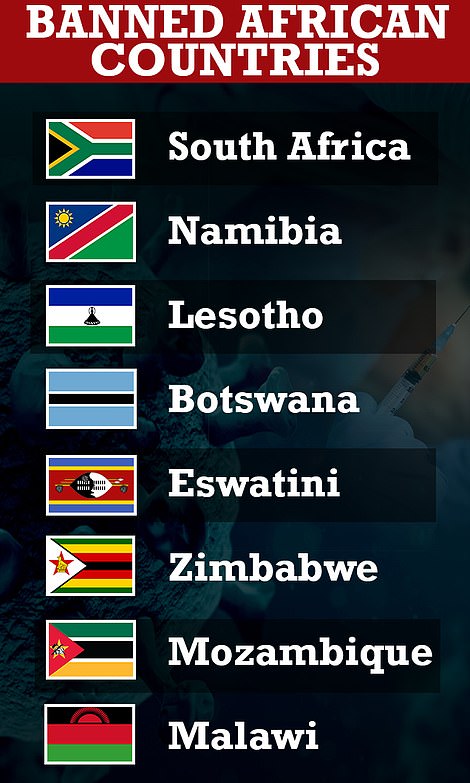 ‘In South Africa – even though the numbers are relatively small – its ability to infect people who have recovered from infection, and even people who have been vaccinated, make us say: “This is something you gotta pay really close attention to. And be prepared for something that’s serious,”‘ Fauci said.

‘It may not turn out that way but you really want to be ahead of it, and that’s the reason why we’re doing what we’re doing.’

Biden has said the pandemic will not end until global vaccinations are in place.

On Friday, Biden announced a ban on travel from eight southern African countries in response to Omicron – hours after his chief scientific advisor suggested the move was unlikely, and despite Biden himself declaring last year that ‘banning travel will not stop it’.

While Fauci said son his Today Show segment this morning that ‘blocking travel from a given country is to just give us time to assess it better,’ only a few hours before Biden announced his decision the chief scientist said he thought a ban was unlikely.

He also noted that the travel bans are ‘not any reason to panic’.

But when asked if he thinks Omicron is already in the US, Fauci replied: ‘I would not be surprised if it is.

‘We have not detected it yet but when you have a virus that is showing this degree of transmissibility and you’re already having travel-related cases…it almost invariably is ultimately going to go all over.

The president spent Thanksgiving in Nantucket for a break with his family, where he decided after a 30-minute conversation with Fauci and his team that travel will be banned from Botswana, Zimbabwe, Namibia, Lesotho, Eswatini, Mozambique and Malawi.

He told reporters that US citizens and green card holders will still be able to travel into the country from the banned regions but no one else will be allowed.

The decision came after the UK and Israel halted travel on Thursday and the EU followed suit. 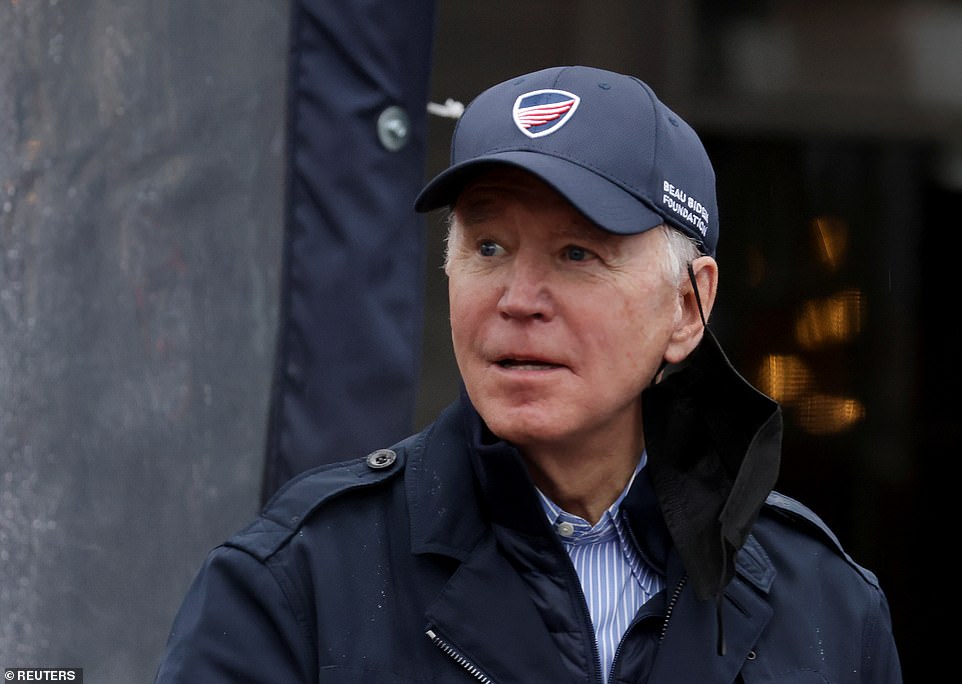 President Biden spoke with reporters in Nantucket, where he celebrated Thanksgiving with his family, and said that he decided on the ban out of an abundance of caution 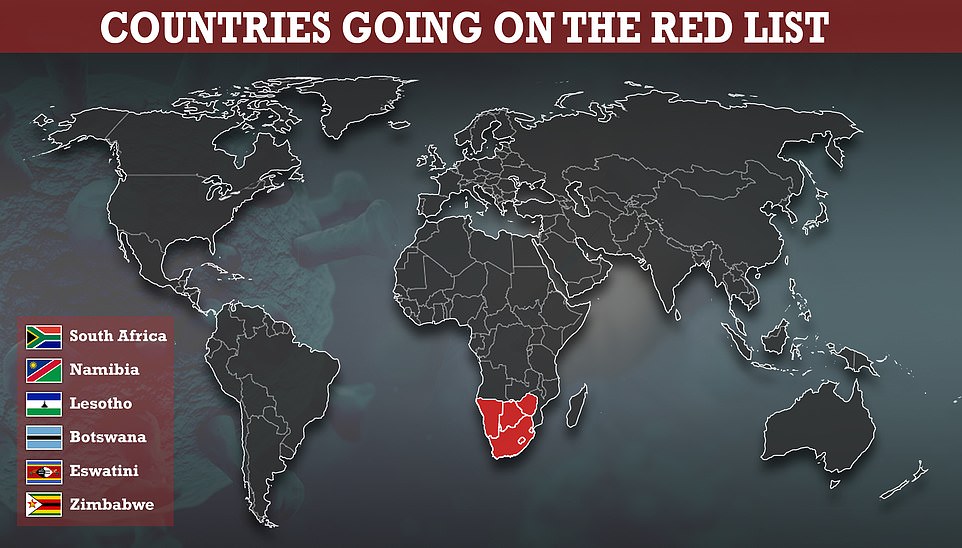 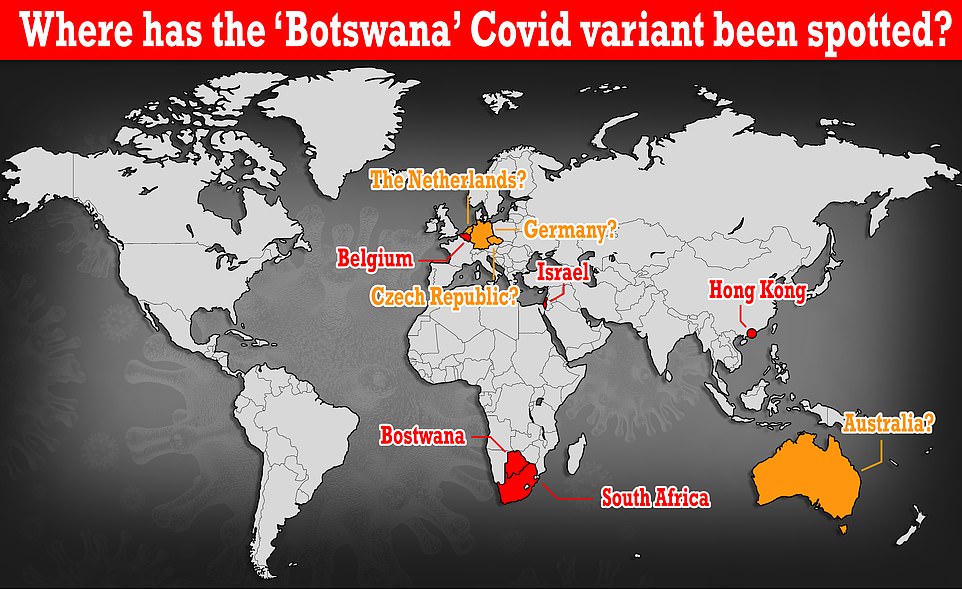 Cases of Omicron have already been picked up in South Africa, Botswana, Hong Kong, Israel and Belgium. It is not yet known whether the variant arrived in the Netherlands yesterday but Dutch authorities are sequencing passengers’ tests. There are also suspected individual cases being sequenced in Germany, the Czech Republic and Australia

Hochul insisted that the troubling new variant of Covid that first emerged in Botswana is ‘coming’.

Her warning came as a leading epidemiologist told DailyMail.com the new strain was deeply troubling, urging tougher travel restrictions and saying the virus could spark ‘pandemic 2.0’.

‘Are the antibodies that are induced by the vaccines that we are using – do they protect against this?’ he also noted he was wondering.

Speaking to CNN yesterday, Fauci said that he was ‘in very active communication’ with South African colleagues’.

South African experts yesterday also attempted to calm the wave of panic over the variant, describing it as a ‘storm in a tea cup’.

Meanwhile near Amsterdam, around 600 passengers arrived on two planes in Schipol Airport from Johannesburg – the epicenter for the new strain that experts fear is 40 percent more vaccine evasive than Delta – hours after travel bans were put in place. 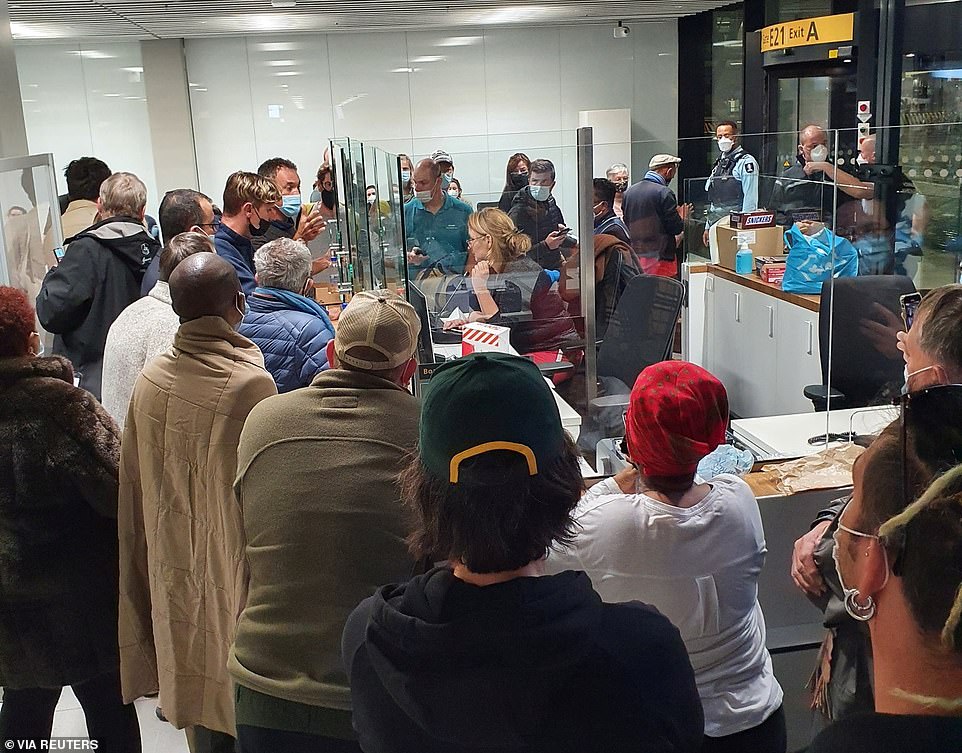 Passengers waited on their Covid test results at Schiphol Airport, in Amsterdam, the Netherlands last night 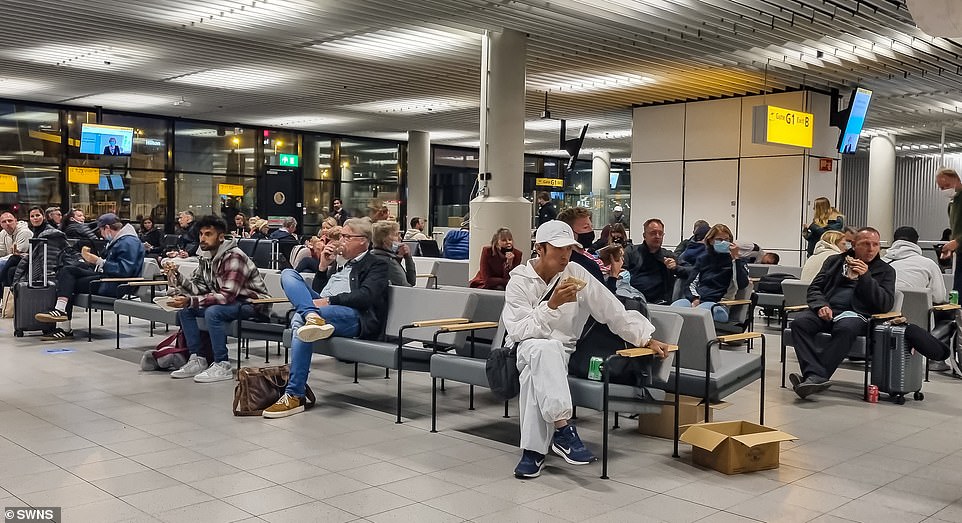 Passengers from KLM flight KL598 from Cape Town, South Africa wait to be screened at Amsterdam Airport, the Netherlands, yesterday

The Dutch government banned all air travel from southern Africa early on Friday. Health Minister Hugo de Jonge said that passengers already en route to the Netherlands would have to undergo testing and quarantine upon arrival.

Europe’s first case of the variant was spotted in Belgium on Friday – despite the unvaccinated woman who caught it having travelled to Turkey and Egypt, not South Africa where the strain emerged.

And Australian authorities – who also banned travel to nine countries in the region – fear the variant may have already entered the country.

South Africa recorded 2,828 new Covid cases yesterday – more than double the 1,374 recorded last Thursday. But infection levels have yet to skyrocket in the country and no hospitalizations with the new variant have occurred so far.

It has also been found in Israel, Hong Kong and Belgium, and is worrying scientists because it appears to be able to easily reinfect those who have already been infected, or who have had the vaccine.

What do we know about the Omicron variant?

Scientists have said they are concerned about the B.1.1.529 variant, named by the World Health Organization as Omicron, as it has around 30 different mutations – double the amount present in the Delta variant. The mutations contain features seen in all of the other variants but also traits that have not been seen before.

UK scientists first became aware of the new strain on November 23 after samples were uploaded on to a coronavirus variant tracking website from South Africa, Hong Kong and then Botswana.

On Friday, it was confirmed that cases had been identified in Israel and Belgium but currently there are no known cases in the UK.

Professor Adam Finn, a member of the Joint Committee on Vaccination and Immunization (JCVI), told Good Morning Britain on Friday that sequencing is being carried out around the UK to determine if any cases have already been imported.

Work is also under way to see whether the new variant may be causing new infection in people who have already had coronavirus or a vaccine, or whether waning immunity may be playing a role.

Professor James Naismith, director of the Rosalind Franklin Institute in Oxford, has said the new variant will ‘almost certainly’ make vaccines less effective, though they would still offer protection.

Pfizer/BioNTech, which has produced a vaccine against Covid-19, is already studying the new variant’s ability to evade vaccines.