Biden lost his temper with Zelensky and told him to ‘be more appreciative’ when he asked for more than the $1billion in aid the US had given Ukraine during a June phone call, report claims

By Morgan Phillips, Politics Reporter For Dailymail.Com and Chris Pleasance

President Joe Biden lost his temper with Volodymyr Zelenskyy and told him to be more appreciative of the billions in military aid the U.S. had given Ukraine in a testy phone call in June, a new report claims.

A new NBC report says that Biden had ‘barely finished telling Zelensky he’s greenlighted another $1 billion in military assistance when Zelenskyy started listing all the additional help he needed and wasn’t getting.’

Biden then reportedly lost it, according to sources familiar with the call. Raising his voice, he told Zelensky the Americans had been quite generous and his administration and the military were working hard for Ukraine. He told the Ukrainian leader he show a little more appreciation.

The aid was publicly announced an Zelensky released a statement thanking the U.S. for the package.

President Biden reportedly lost his temper with Volodymyr Zelensky in a phone call between the two world leaders as Biden felt the Ukrainian president was not being appreciative of U.S. aid 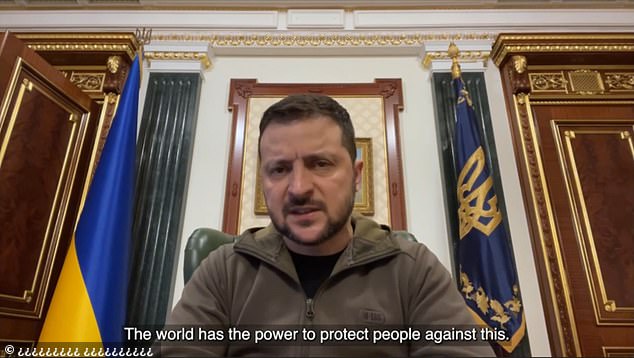 The Biden-Zelensky relationship has only improved since then, according to people familiar, and there have been subsequent phone calls and aid packages. But the frustration is indicative of Biden’s awareness that public support for dumping billions into a war across the globe could begin to wane.

U.S. aid to Ukraine has surpassed $65 billion, around $15 billion of that in military aid coming from the Pentagon. Republicans have already warned they won’t be offering a ‘blank check’ to Ukraine, as GOP Leader Kevin McCarthy put it.

Earlier this month Biden expressed concerns that if Republicans took back Congress aid money would dry up.

Biden and the less isolationist members of both parties have already discussed ramming through as much as $50 billion in Ukraine funding to an omnibus spending bill that they’d pass before a new Congress is sworn-in in January.

‘These guys don’t get it. It’s a lot bigger than Ukraine. It’s Eastern Europe. It’s NATO. It’s really serious, serious consequential outcomes,’ Biden said earlier this month of Republicans who want to turn off the spigot of aid dollars.

As of Monday morning Ukraine’s capital has been left largely without water and suffering power cuts this morning after Russia unleashed another missile barrage on major cities.

Vitali Klitschko, the mayor of Kyiv, said 80 per cent of his city has been left without water and 350,000 homes have no power after Russian cruise missiles hit key infrastructure sites – with witnesses reporting five explosions.

Kharkiv, in the north, Dnipro and Cherkasy, in central Ukraine, and the southern city of Zaporizhzhia were also hit – causing power cuts.

More than 50 cruise missiles were fired by Russian strategic bombers with 44 of the projectiles shot down, Kyiv’s commanders said.

It comes two days after Russia’s Black Sea fleet was damaged by explosive-laden drones in an attack blamed on Ukraine.

Russia has been targeting civilian infrastructure, including electricity and water supplies, in an apparent attempt to freeze Ukrainians in their homes as winter hits.

Facing setbacks on the battlefield, Moscow seems to be targeting civilians to break their will to continue the war. Such attacks are war crimes, under international law.