Former Vice President Joe Biden cut into President Trump’s character in an Iowa address that was meant to serve as an opening punch before the president headlines a Des Moines rally Thursday night.

Biden called out Trump for a laundry list of things: lying, dog-whistling racists, trying to scrap Obamacare – even being mean to climate activist Greta Thunberg.

‘Welcome to Donald Trump’s world: up is down, lies are the truth, allies are enemies, everything is through the looking glass,’ Biden told a crowd gathered in a school gym in a Des Moines suburb.

Biden made no mention of impeachment.

He previously said his role in the impeachment saga was like ‘Alice in Wonderland.’

Former Vice President Joe Biden gave an address in the hours before President Trump was set to arrive in Iowa slamming him for his character flaws: including lying, dog-whistling racists and being mean to climate activist Greta Thunberg 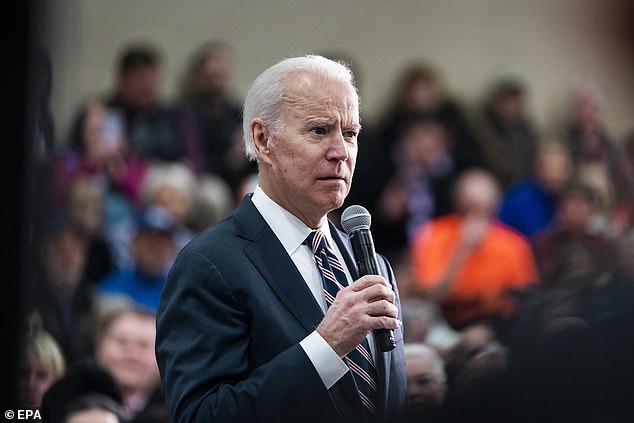 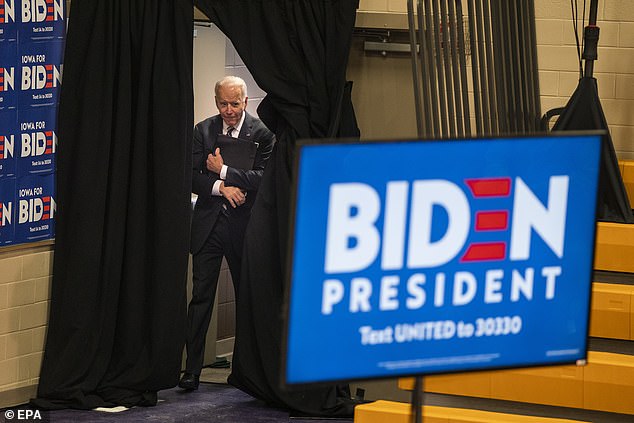 Vice President Joe Biden is spotted clutching his speech backstage before speaking to an audience Thursday in Waukee, Iowa 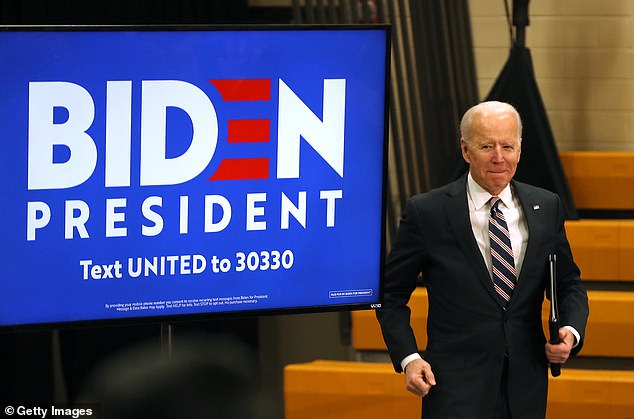 Former Vice President Joe Biden arrives at an event in Iowa Thursday, where he took on President Trump for being a liar 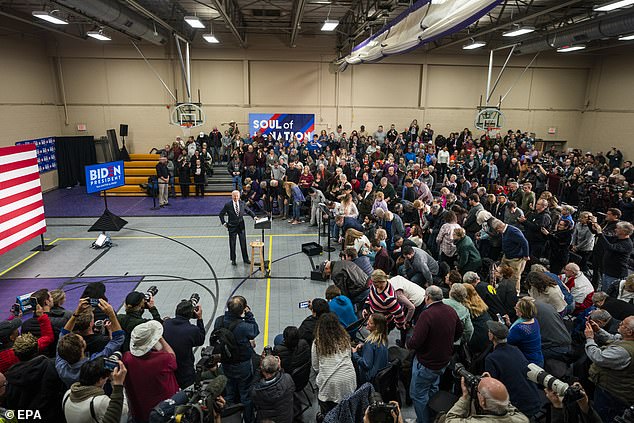 The audience consisted of several hundred supporters, far short of the thousands President Trump draws with his campaign rallies 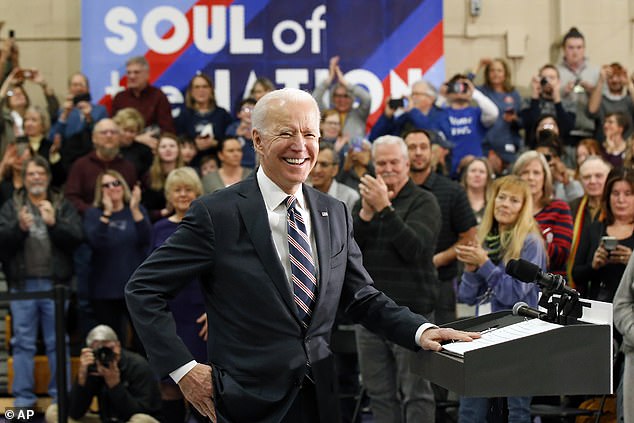 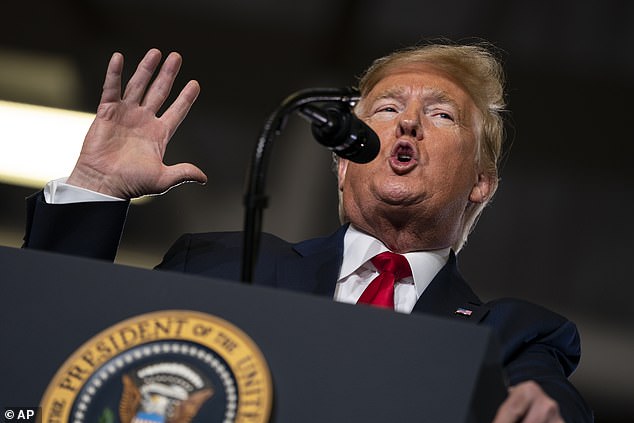 Former Vice President Joe Biden’s address was meant to take away some of the attention from President Trump, who will hold a rally in Des Moines Thursday night

‘In Joe Biden’s America, the president’s tax returns won’t be a secret. Political self interest won’t be confused with the national interest and no one, not even the president of the United States, will be above the law,’ Biden said.

‘Does the character of a president matter?’ Biden said.

He then turned to a number of policy issues – starting with healthcare.

‘He’s determined to destroy Obamacare. I’m determined to save it,’ Biden said. ‘Why does Donald Trump, why does he so badly want to get rid of it? ‘Cause it’s called Obamacare.’

‘He has no plan, he has no better idea, he just can’t stand a single achievement from our administration,’ Biden added.

‘He’s already lying about it,’ Biden continued. ‘He just said, he just said he’s the reason why pre-existing conditions are covered.’

‘You can’t make this stuff up,’ he commented. ‘He’s trying to take credit for the very thing he’s in federal court trying to destroy.’

Biden turned to climate change and climate activist Greta Thunberg, the 17-year-old Swedish teen who was named Time magazine’s 2019 ‘Person of the Year.’ 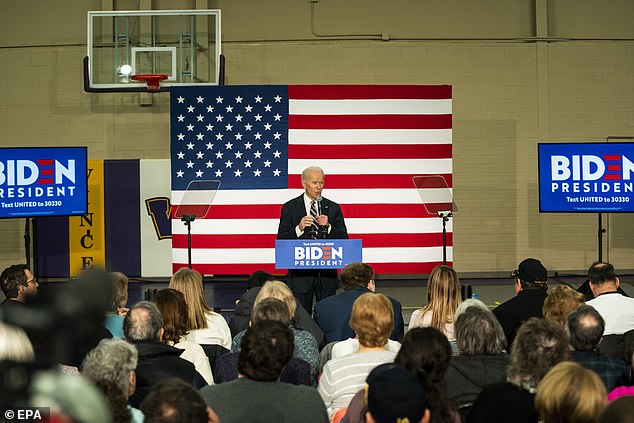 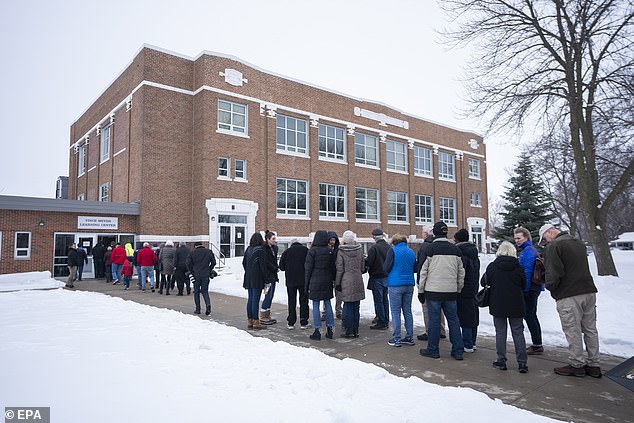 Trump has been critical of Thunberg for months, and continued insulting her at the recent World Economic Forum summit in Davos, Switzerland, where they both spoke.

‘While the rest of the world applauded Greta Thunberg for her courage and her leadership … all Donald Trump could ever do is seethe over losing the cover on Time magazine,’ Biden said. ‘His response, his response: she’s an angry teenager she has a problem. She’s an angry teenager, she has anger problems,’ he repeated, trying to get the insult right.

‘I’m going to run on climate change and we’re going to beat him on the issue flat out,’ Biden said.

The ex-veep continued to focus on what happened in Charlottesville.

‘He tracks in the ugliest, ugliest lies and bigotry and prejudice,’ Biden said.

‘He’s more bully than president. He’s more George Wallace than he is George Washington. Hate groups are listening and they’ve heard the dog whistle,’ he said.

‘My response is always the same: America is so much better than this. So much better,’ Biden said.

With four days left before the Iowa caucuses, Biden concluded by asking audience members of their support.

Among the four frontrunners, Biden and former South Bend Mayor Pete Buttigieg have had the state to themselves for the week, with Sens. Bernie Sanders and Elizabeth Warren stuck back in Washington due to Trump’s impeachment trial.

Warren has a flock of surrogates trying to make up for lost ground – as the Real Clear Politics polling average now has her in fourth place in the state.

On Wednesday she dispatched her dog Bailey, a 20-month golden retriever, and her husband Bruce Mann to Iowa events. She cancelled planned appearances Thursday thanks to the trial, and had Mann and the dog add more events. Former HUD Secretary Julian Castro, who endorsed her after he left the race, is also campaigning for Warren.

Sanders had one of his most potent advocates, Rep. Alexandria Ocasio-Cortez, on the trail for him last weekend.

He’s expected back in Iowa Friday night for a combined concert-rally with Bon Iver.

And then there’s Trump, who’s looking toward the general election – and for an opportunity to knock the crop of Democratic hopefuls – who will hold a rally Thursday night.