Biden revels in Ernst boasting that impeachment trial will hurt him

Joe Biden revels in Iowa Republican Joni Ernst boasting that impeachment trial will hurt his chances in next week’s caucus and mocks: ‘She spilled the beans!’

‘Did anyone see what Sen. Joni Ernst said yesterday?’ Biden asked a crowd Tuesday in Muscatine, Iowa. ‘She spilled the beans.’

Ernst, a Republican from Iowa, is being criticized by Democrats for comments she made Monday after the president’s attorney Pam Bondi went after Biden and his son Hunter on the Senate floor. 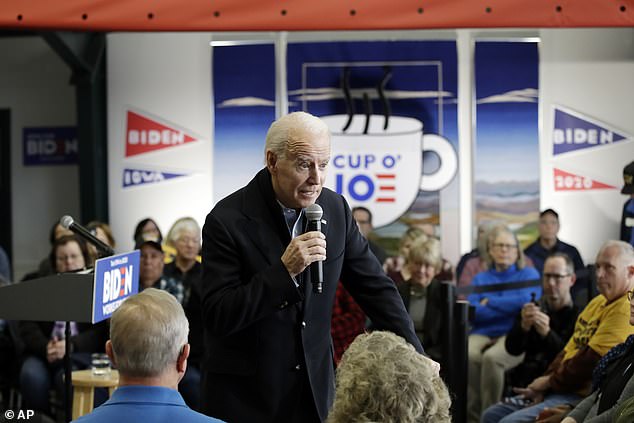 Former Vice President Joe Biden made the comments Tuesday morning during a campaign stop in Muscatine, Iowa. He’s spending the week before the caucuses on a bus tour of Iowa 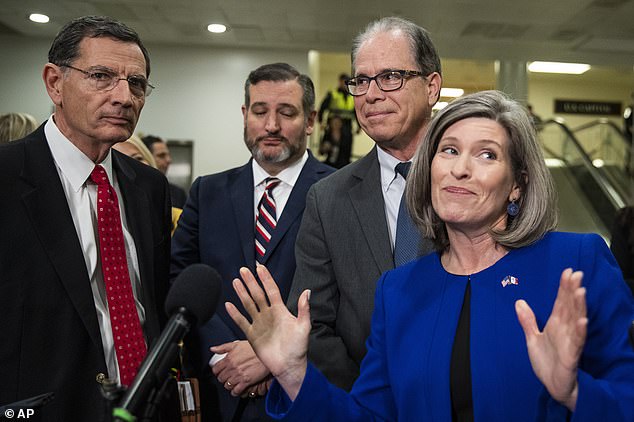 Sen. Joni Ernst (right) pointed out Monday that the Iowa caucuses were in one week’s time and asked if Democratic voters would still be supportive of former Vice President Joe Biden after Pam Bondi linked he and his son to Ukraine corrupion. ‘

The impeachment centers on Trump pressuring Ukraine’s president – holding up $400 in Congressionally-approved military aid – to announce he was opening an investigation into Joe and Hunter Biden.

‘Iowa caucuses, folks,’ Ernst said as she stood alongside Sen. John Barrasso, a Wyoming Republican, in the Senate subway’s hallway. ‘Iowa caucuses are this next Monday evening and I’m really interested to see how this discussion today informs and influences the Iowa caucus voters, the Democratic caucus-goers.’

‘Will they be supporting Vice President Biden at this point?’ she mused. ‘Not sure about that,’ she quipped.

Critics were quick to point out the similarities between what Ernst said and what now House Minority Leader Kevin McCarthy uttered in Septemer 2015, linking Republicans’ endless Benghazi probes into hurting Hillary Clinton at the polls.

‘Everybody thought Hillary Clinton was unbeatable, right? But we put together a Benghazi special committee. A select committee. What are her numbers today? Her numbers are dropping. Why? Because she’s untrustable,’ McCarthy said. ‘But no one would have known that any of that had happened had we not fought to make that happen.’

Biden has been trying to use his supporting role in the impeachment saga to his political advantage with Iowa voters.

On Monday night at an event at the University of Iowa, Biden said it was like being ‘Alice in Wonderland.’

‘This is crazy, just think about it,’ Biden said, explaining that Trump was getting impeached ‘for trying to get a foreign leader to say something against an opponent.’

He didn’t name himself as said opponent, but he brought up how his son was targeted by Bondi on the Senate floor several minutes later.

‘These guys are attacking me and my family,’ he said. ‘The press corps with me, they’re all good people following me, they keep asking, “oh, they brought up your son Hunter and they’re doing this and that and the other thing.'”

Biden then told the audience he wasn’t holding a grudge.

Biden boasted at the Iowa debate earlier this month that his poll numbers have only gone up since impeachment.

‘I have been the object of his affection now more than anybody else on this stage,’ Biden said motioning to his fellow Democrats. ‘I’ve taken all the hits he can deliver and I’m getting better,’ he said of his standing in the polls.

Biden remains No. 1 in national polls, including a new survey this week from Morning Consult, but some fresh polling from Iowa and New Hampshire show Sen. Bernie Sanders ahead.