Two week after the violence in Charlottesville occurred, former Vice President Joe Biden put his thoughts on President Trump’s response into words, writing an editorial for the Atlantic.

In short, Biden was disgusted by it.

‘We have an American president who has emboldened white supremacists with message of comfort and support,’ Biden said, as he hinted Trump’s pardon of Sheriff Joe Arpaio was what motivated him to pen the piece. 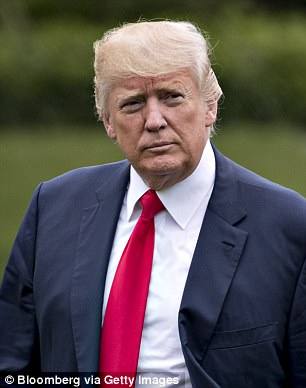 Vice President Joe Biden (left) wrote a strongly-worded editorial for the Atlantic, which was released online Sunday, in which he condemned President Trump’s (right) response to Charlottesville and his pardon of Sheriff Joe Arpaio

He starts it by recalling January 17, 2009, as an Amtrak train carrying President-elect Obama was to pick up Biden, too, from a station stop in Wilmington, Delaware.

As he was about to take his historic trip into D.C., to be sworn in alongside the nation’s first African-American president, his mind thought back to 1968, when he was standing on that platform and watching Wilmington burn in the aftermath of the assassination of civil rights leader Martin Luther King Jr.

‘I was living history – and reliving it – at the same time,’ Biden recalled ‘And the images racing through my mind were a vivid demonstration that when it comes to race in America, hope doesn’t travel alone.’

‘It’s shadowed by a long trail of violence and hate,’ he said.

That ‘long trail,’ he said, emerged once again in Charlottesville earlier this month when ‘neo-Nazis, Klansmen, and white supremacists emerging from dark rooms and remote fields and the anonymity of the web into the bright light of day on the streets of a historically significant American city.’

Biden said he believed ‘we are living through a battle for the soul of this nation.

‘The giant forward steps we have taken in recent years on civil liberties and civil rights and human forces are being met with ferocious pushback from the oldest and darkest in American,’ he said. 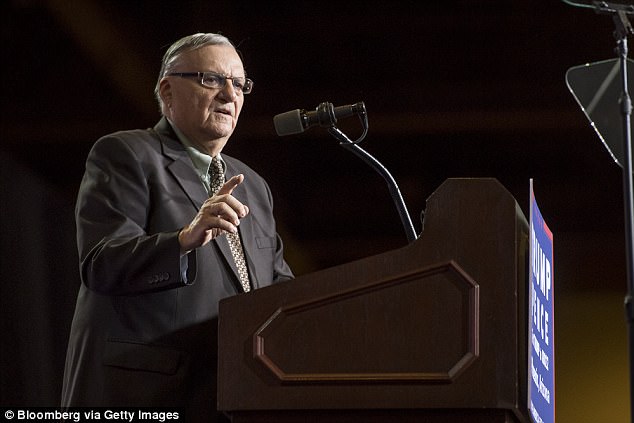 ‘Did we think the charlatans and the con-men and the false prophets who have long dotted out history wouldn’t revisit us, once again prop up the immigrant as the source of all our troubles, and look to prey on the hopelessness and despair that has grown up in the hollowed-out cities and towns of Ohio and Michigan and Pennsylvania and the long-forgotten rural stretches of West Virginia and Kentucky?’ Biden continued, listing a number of states that President Trump had won.

While racial hatred is old, Biden pointed to the ‘special challenge’ of extinguishing it under President Trump.

‘Today we have an American president who has publicly proclaimed a moral equivalency between neo-Nazis and Klansmen and those who would oppose their venom and hate,’ Biden proclaimed.

He also said, then, that Trump had ’emboldened white supremacists.’

‘This is a moment for this nation to declare what the president can’t with any clarity, consistency, or conviction: There is no place for these hate groups in America,’ Biden said. ‘Hatred of blacks, Jews, immigrants – all who are seen as “the other”– won’t be accepted or tolerated or given safe harbor anywhere in this nation.’

‘That’s the America I know,’ he added.

Biden then chronicled the response to Trump’s comments, with business leaders backing away from the president, followed by charities pulling their events from Trump properties like Mar-a-Lago.

Biden himself had taken to Twitter the day 32-year-old Heather Heyer was killed by a car driven by a Nazi sympathizer, when Trump had condemned the violence on ‘many sides.’

‘There is only one side,’ he tweeted.

‘No. Not in America. We must be stronger, more determined and more united than ever. Racism and hate have no place here,’ he also wrote.

Biden pointed to the counter-protests in Boston, where those marching against hate groups far outnumbered those who were members.

But then he spoke of Trump’s actions this week.

‘Now he’s pardoned a law-enforcement official who terrorized the Latino community, violated its constitutional rights, defied a federal court order to stop, and ran a prison system so rife with torture and abuse he himself called in a “concentration camp,”‘ Biden said, not saying Sheriff Joe Arpaio’s name.

He said that the citizens of the country ‘carry a special burden in 2017’ thanks to Trump.

‘We have to remember our kids are watching,’ he said. ‘We have to show the world America is still a beacon of light.’

Since leaving office he’s been involved in a number of Biden-branded projects including the Biden Foundation, the Biden Cancer Initiative, the Penn Biden Center for Diplomacy and Global Engagement and the University of Delaware’s Biden Institute for domestic initiatives.