President Joe Biden will get his updated ‘bivalent’ Covid vaccine tomorrow amid a sluggish rollout of the new jab.

The 79-year-old president’s scheduled inoculation — three months after he caught the virus — was revealed today at a White House press briefing.

He expected to use it to urge others to get the jab, after being blamed for slow uptake for declaring the Covid pandemic ‘over’.

It will be his fifth jab to date, after he got the primary course and two boosters made by Pfizer. He also tested positive for Covid in July.

America’s roll-out of the updated shot — to protect against BA.5, the current dominant strain, and BA.4 — has been repeatedly blasted for its slow pace.

Despite calls for all to get inoculated by Halloween, barely 20million people — or just 8.5 per cent of those who are eligible more than a month into the drive — have got the jab.

Health chiefs are recommending the updated boosters for all under-5s who are already fully vaccinated. It comes amid warning signs Covid cases are now turning upwards in 15 states, as well as concerns over other respiratory viruses this year.

Pictured above is Biden receiving his second booster shot on March 30 this year, in line with official guidance 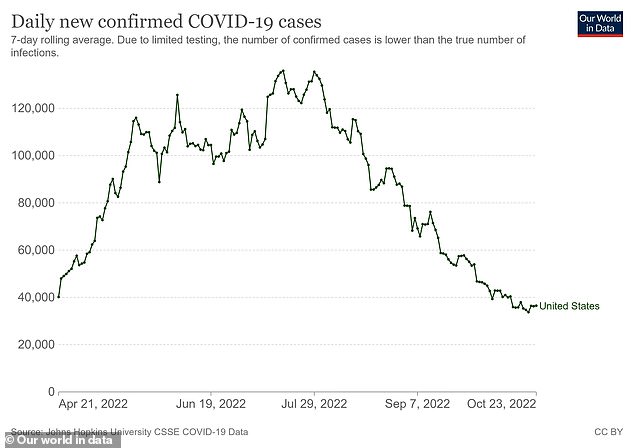 The above graphs shows the number of Covid cases being recorded in the US by day. The steady decline now appears to be slowing, amid signs of an uptick in 15 states 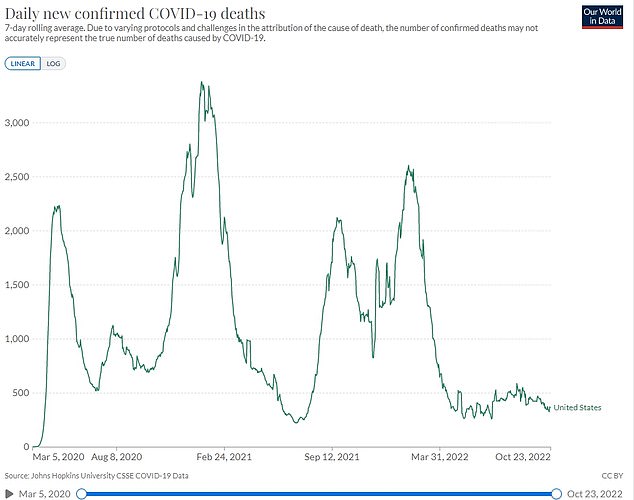 America is currently recording about 360 Covid deaths a day. At the same time last year the country was registering more than 1,600 a day

White House spokesman Kevin Munoz revealed the President would get his inoculation tomorrow during a press conference.

It is not clear whether it will be the Pfizer or Moderna version, or whether the inoculation will be broadcast live on television.

But Mr Munoz said they were aiming to encourage more Americans to take up the shots. He said: ‘We need everyone to step up and get their updated vaccine as soon as possible.’

President Joe Biden has had four Covid vaccinations so far, and also tested positive for the virus once.

Tomorrow he is due to get the updated ‘bivalent’ booster vaccine live on television — his fifth inoculation.

Below is a timeline of Biden’s vaccinations and when he caught Covid:

Nearly four months after his last Covid shot the President tests positive for the virus.

He had only a mild illness, and tested negative five days later after beginning a course of Paxlovid to suppress the virus.

But by July 30 he had tested positive again, suffering a ‘rebound’ infection.

Biden is scheduled to get his updated booster shot on this date.

The US has spent more than a billion dollars securing the updated vaccines to roll out to the nation.

But uptake has been slow after Biden declared that the Covid pandemic was now ‘over’ further helping to relieve the sense of emergency. .

He has since rolled back on the comments, and many health chiefs including Dr Anthony Fauci were quick to rush out to say that the pandemic was still ongoing.

Biden is getting the updated booster about three months after he tested positive for the virus in July — which is the lag time health chiefs said should be left after an infection.

His last jab was on March 30 this year, when he got his second booster jab to shore-up immunity for the summer.

Despite getting all the vaccines, however, Biden tested positive for the disease in July last year.

He initially had a mild illness, and was put on anti-viral Paxlovid which saw his infection all but disappear within five days.

But another four days later he tested positive again in what is known as a ‘rebound infection’.

He was cleared of the virus again on August 6 this year.

The US is currently recording about 36,400 cases every day on average.

About 367 people are also dying with the virus every 24 hours on average.

For comparison, at the same time last year the tally was more than 1,600 every 24 hours.

But there are concerns that the US is now facing a ‘tripledemic’ of Covid, flu and RSV this winter — as other respiratory diseases return with a ‘vengeance’.

Nations in Europe have already started to see their Covid cases rising, in a warning sign that the US is about to face an uptick.

The drop in the national tally has now stopped, with 15 states registering an uptick in infections.

There are fears that ‘scrabble’ variatns such as BQ.1 and XBB may drive a surge in infections — as these are the most transmissible variants yet.

But there is no sign that they are more likely to cause severe disease or death than other versions of Omicron.

The updated jabs are expected to provide a level of protection against these too, by boosting general immunity levels against Covid.