President Joe Biden issued a call to action to world leaders on Thursday, asking them to work together to keep the earth’s temperature from rising too high in the next decade, arguing it would result in new jobs and economic opportunities.

‘The signs are unmistakable. The science is undeniable. The cost of inaction is mounting,’ he said in his speech kicking off his Climate Summit.

‘This is a moral imperative, an economic imperative,’ Biden argued. ‘Time is short, but I believe we can do this. And I believe that we will do. Thank you for being part of the summit.’

In his remarks, Biden stressed the importance of working together but also emphasized combatting climate change can create jobs and boost economies.

He spoke from the East Room of the White House, which was camera-ready for the virtual summit, decorated with plants and greenery. Vice President Kamala Harris introduced him and he was joined by Secretary of State Anthony Blinken and climate czar John Kerry. The attendees from around the world, joining him virtually, were on a screen in front of him.

Biden vowed the US would do its part, pledging the country will cut emissions blamed for climate change by 50 to 52 percent by 2030 compared with 2005 levels and to set America on a path of zero emissions economy by no later than 2015.

‘No nation can solve this crisis on our own, as I know you all fully understand all of us, all of us and particularly those of us who represent the world’s largest economies. We have to step up,’ he said.

President Joe Biden issued a call to action to world leaders, asking them to work together to combat climate change as he kicked off Climate Summit 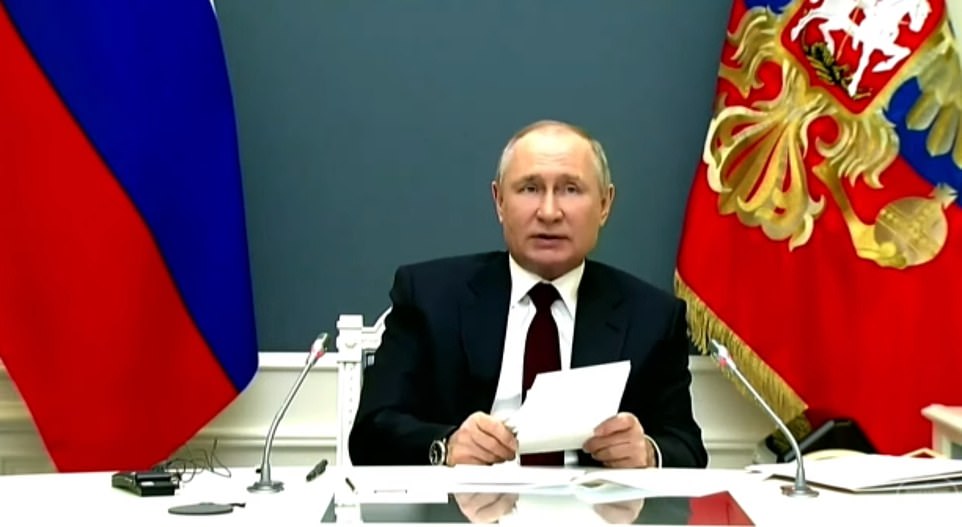 There was an odd moment when it was time for Russian President Vladimir Putin to speak. He was introduced while French President Emmanuel Macron – in pretaped remarks – was still talking. Then Putin sat silently on screen as Biden sat quietly in the East Room with no one speaking; finally Putin spoke after being introduced again 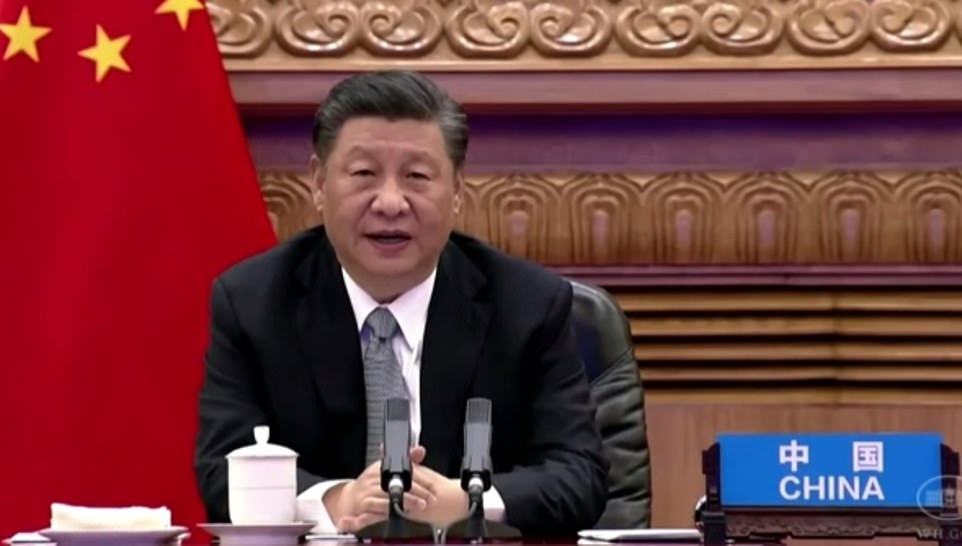 All 40 world leaders invited by the White House were in attendance, including Chinese President Xi Jinping, who addressed the summit 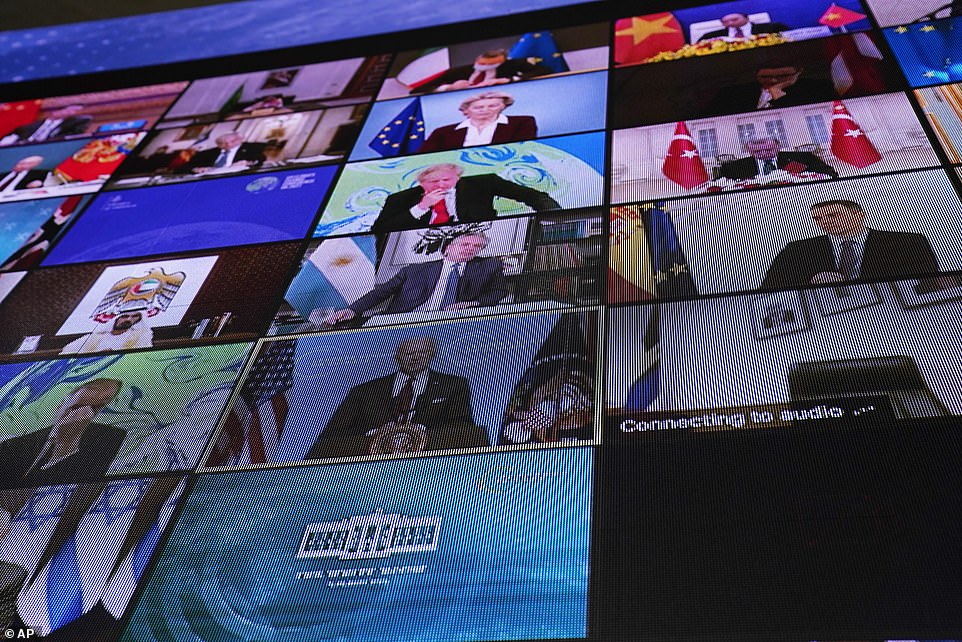 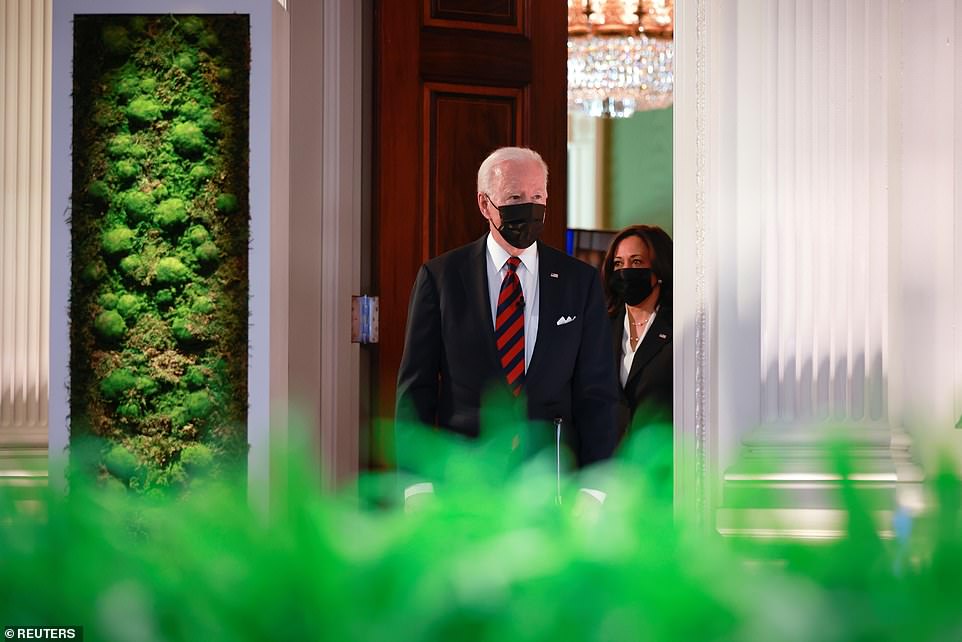 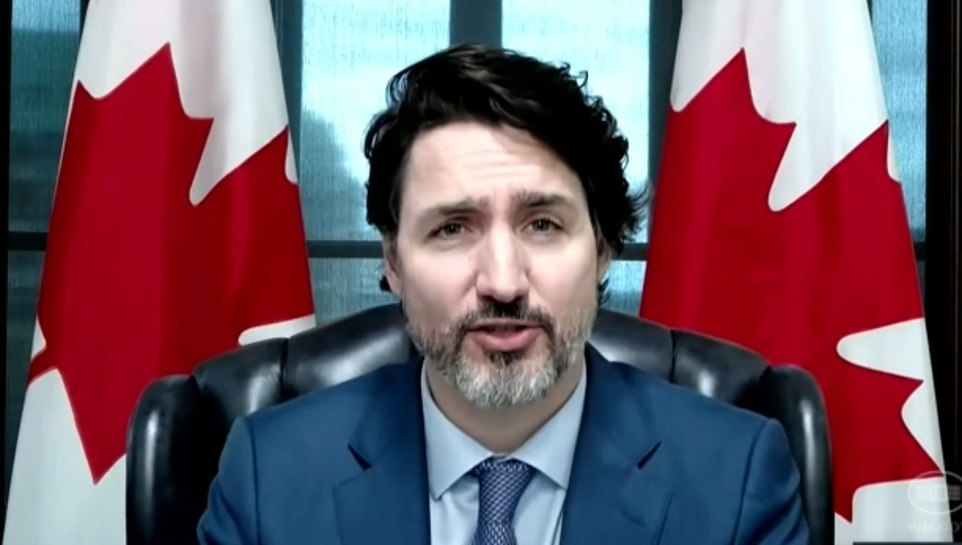 Biden argued taking action now would ‘set the world up for success, protect livelihoods around the world and keep global warming at a maximum of 1.5 degrees Celsius. We must get on the path now, in order to do that.’

$10 billion in the modernization, sustainability, and resilience of federal buildings

‘If we do will breathe easier, literally, and figuratively,’ he said. ‘We’ll create good jobs here at home for millions of Americans and lay a strong foundation with growth in the future.’

His summit kicked off with a slick video about planet earth, where astronauts like Neil Armstrong talk about seeing it from space and how it suffers from global warming.

There were a few technical glitches – Harris’ audio had an echo when she spoke, making it difficult to decipher her remarks, and there were dial tones when Indian Prime Minister Narendra Modi and British Prime Minister Boris Johnson spoke.

There also was an odd moment when it was time for Russian President Vladimir Putin to speak. He was introduced while French President Emmanuel Macron – in pretaped remarks – was still talking. Then Putin sat silently on screen as Biden sat quietly in the East Room with no one speaking.

Finally Putin was introduced again and began his talk.

‘We had some technical difficulties,’ Secretary of State Anthony Blinken said.

‘Russia is genuinely interested in galvanizing international cooperation so as to look further for effective solutions to climate change as well as to all other vital challenges,’ he said.

All 40 world leaders invited by the White House were in attendance on Thursday.

But there will be no one-on-one conversations taking place on the sidelines after the US slapped additional sanctions on Russia and Biden has vowed to take on China.

There will be ‘no bilaterals or side zoom rooms that are happening,’ a senior administration official told reporters on a call Wednesday.

The meeting marks Biden’s first face-to-face meetings with the two leaders – whom he has spoken to on the phone – since he took office.

The leaders, in their remarks, kept their focus on the topic at hand and reiterated their own country’s goals to combat climate change.

British Prime Minister Boris Johnson announced Wednesday the UK would cut emissions by 78 per cent by 2035.

‘It’s vital for all of us to show that this is not all about some expensive, politically correct green act of bunny hugging… This is about growth and jobs,’ he told the summit.

The State Department released a full schedule of the summit, which will take place virtually Thursday and Friday.

In addition to the president and world leaders, several Cabinet secretaries and business leaders will attend. 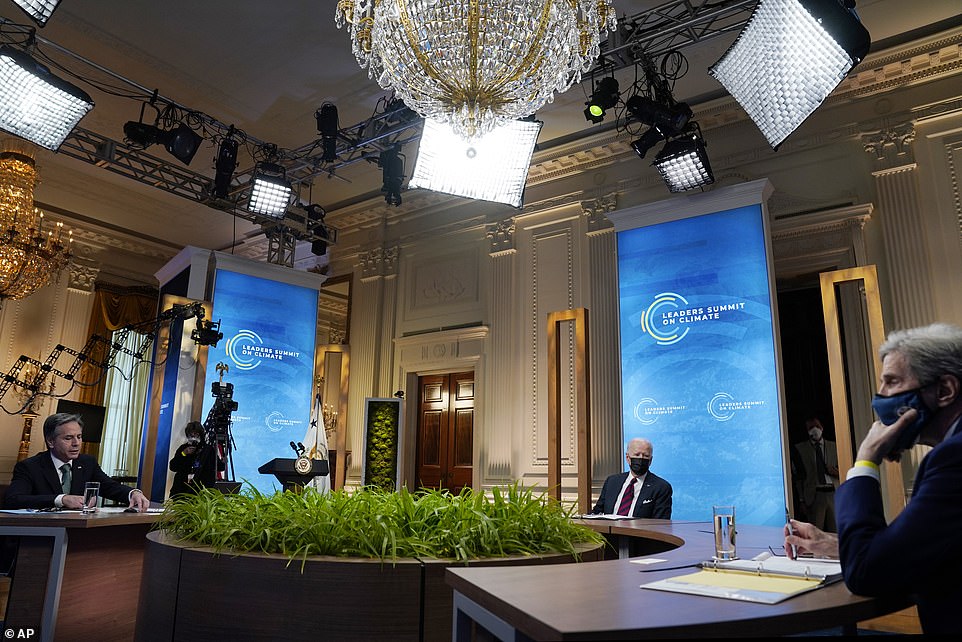 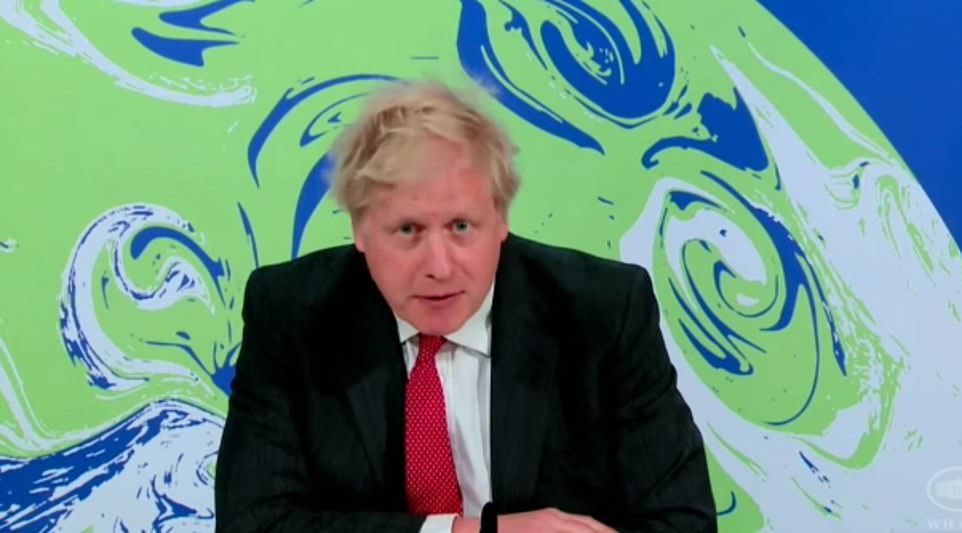 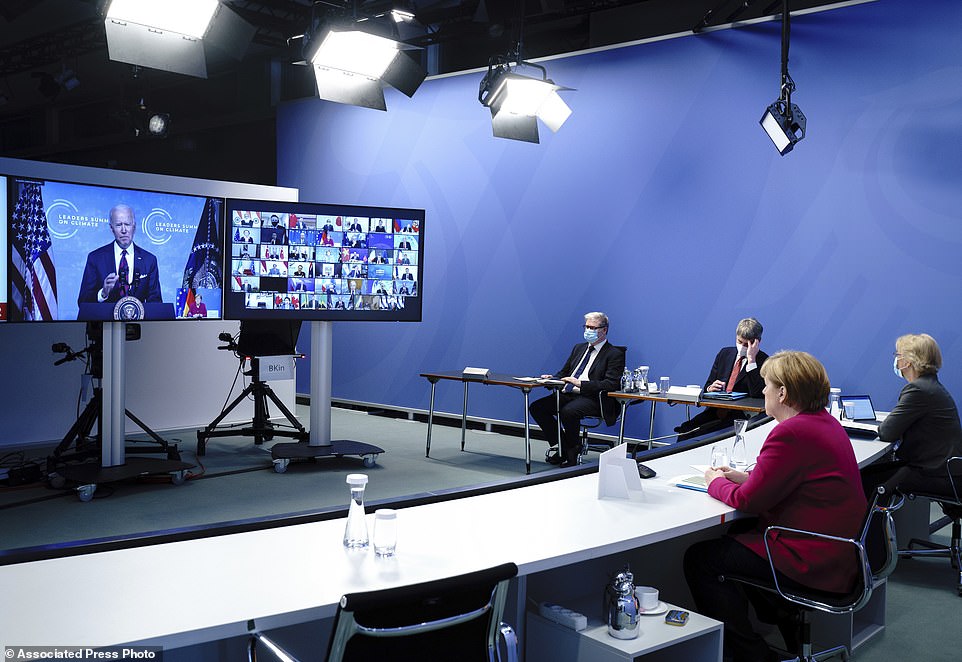 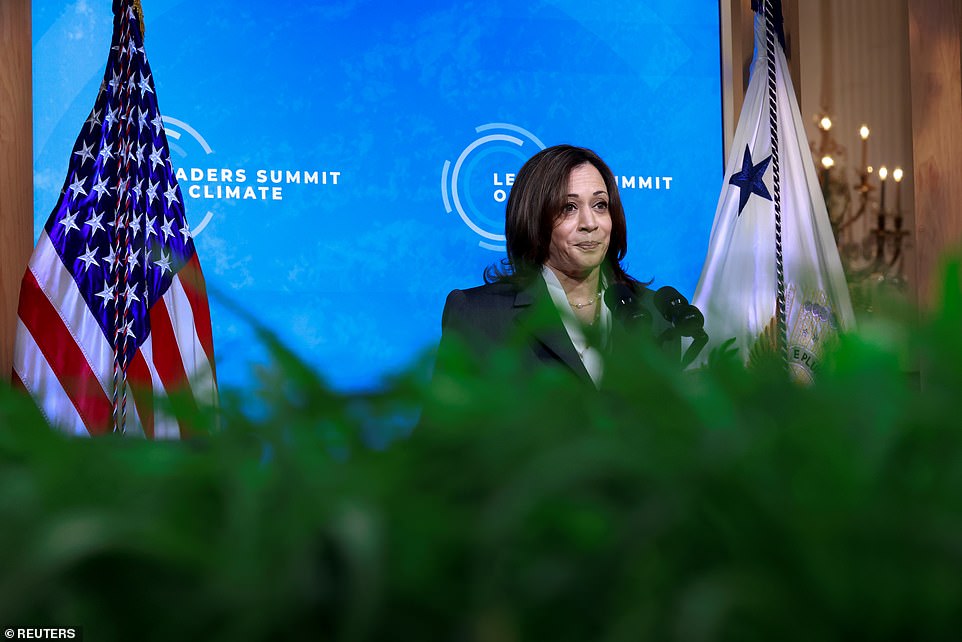 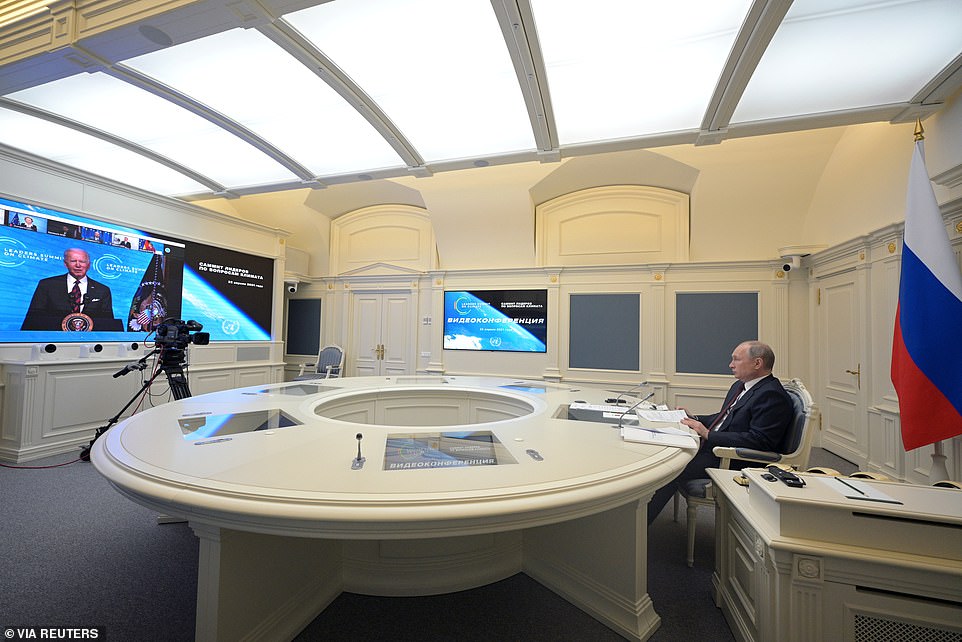 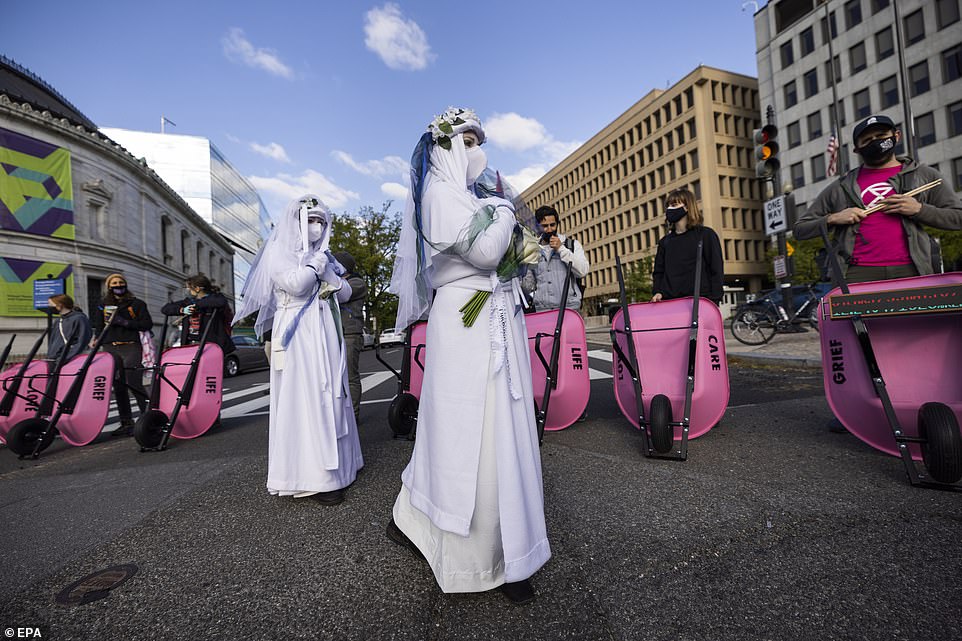 Climate activists with Extinction Rebellion DC protest President Joe Biden’s plan to cut US emissions in half by 2030, which they deem ‘far too little, far too late’ 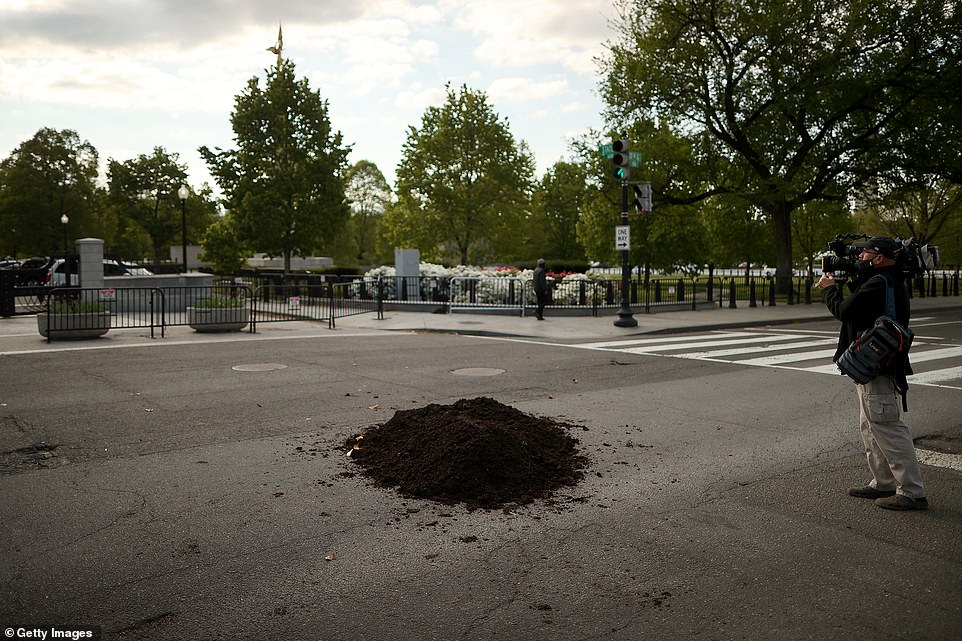 With the summit, Biden is seeking to revive a U.S.-convened forum of the world’s major economies on climate that George W. Bush and Barack Obama both used and Donald Trump let languish.

The new US target on emissions aims to ‘challenge the world on increasing ambition and combatting the climate crisis,’ an administration official said on a briefing call with reporters.

Combined with announcements expected by other leaders, the official said the world will be closer – but not yet on track – to keeping the planet’s temperature within 2.7 Fahrenheit above pre-industrial times, the level scientists say is needed to avoid the most severe effects of climate change.

‘Over half the world’s economy is now moving to cut emissions at a global pace needed to keep 1.5 C in reach,’ the official said. ‘Our coalition is growing.’

Japan said Thursday it aims to cut emissions 46 percent by 2030 — significantly more than previously pledged — and Canada is expected to follow suit. Both countries have forged early bonds with Biden.

In his remarks to the summit, Chin’s President Xi Jinping reiterated his country’s pledge to peak carbon emissions before 2030 and achieve carbon neutrality before 2060.

‘We must be committed to green development. To improve the environment is to boost productivity,’ he said.

Xi emphasized that China is aiming to move from peak carbon to net zero in a short time period – just 30 years, or the span of one generation.

And Japan, a heavy user of coal, announced its own new 46% emissions reduction target.

In his remarks, United Nations Secretary-General António Guterres said the world is ‘at the verge of the abyss’ because of climate change and must take aggressive steps to avoid catastrophe.

He called for world leaders to build a global coalition for net-zero carbon emissions by 2050 – ‘every country, every region, every city, every company and every industry.’

Britain in November will host a UN conference in Glasgow that aims to upgrade the 2015 Paris Agreement.

A UN report late last year said that the world was on course for warming of three degrees Celsius — a level at which the planet is forecast to see many glaciers and ice caps melt, low-lying areas submerged and increasingly severe droughts, floods and disasters that could trigger famine and mass migration.

The White House announced all 40 world leaders invited to President Joe Biden’s Climate Summit will attend. Those include: