Joe Biden’s first campaign ad of the 2020 presidential race, released on Monday, takes an assault on the former vice president’s record on race head on and plays up his electability against Donald Trump.

The ad includes direct imagery of the former vice president working with Barack Obama and other African-Americans, including a young black man he consoles, and doubles down on Biden’s promise to protect the Affordable Care Act.

‘Most of all, he’ll restore the soul of the nation, battered by an erratic, vicious, bulling president, strong, steady, stable leadership: Biden. President,’ declares the minute spot that’s airing online and Iowa. 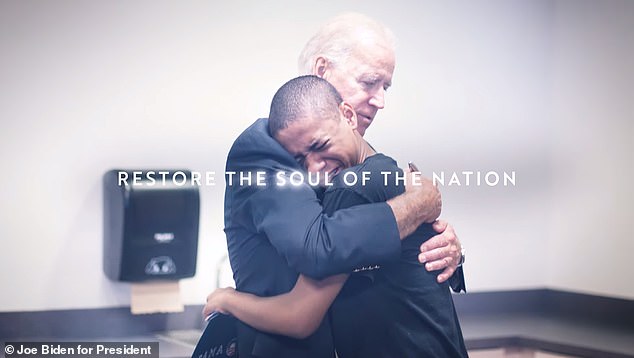 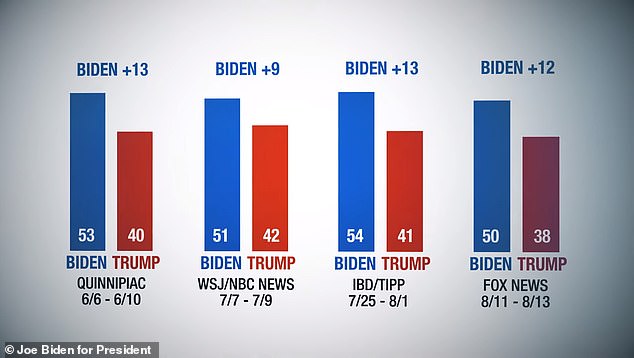 Its release comes on the same morning that a CNN poll showed Biden retaking his double-digit lead over the packed Democratic field with few other break out candidates.

The survey indicates that a bevy of attacks on Biden in two primary debates did not do lasting damage. He leads the field again with the support 29 percent of Democrats and left-leaning independents who are registered to vote.

His next closest competitors are Bernie Sanders, 15 percent, and Elizabeth Warren, 14 percent. All other candidates such as Kamala Harris and Pete Buttigieg have fallen back into the single digits.

Biden claimed during an Iowa swing this month that ‘I don’t look at any of the polls’ six months out from the first contests.

‘I know the polls have me ahead by 10 or 12 points to the next person, but it’s early, it’s really early,’ he told reporters a day prior at the Iowa State Fair.

At the time, the front-runner was sputtering, after a double-sided attack at the last debate from Harris and Booker with intermittent jabbing from candidates at the edge of the stage like Bill de Blasio, who cautioned him that facing-off against Trump would be even more challenging.

Bouyed by new polling that indicates that voters who flirted with Harris have returned to Biden’s column, his ad reminds Democrat voters that the former vice president is considered the candidate with the best chance of defeating Trump.

‘We have to beat Donald Trump. And all the polls agree, Joe Biden is the strongest Democrat to the job.’ 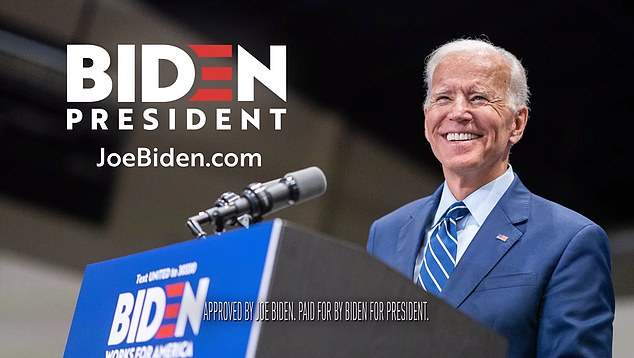 Sanders’ campaign brushed off the assertion. Senior adviser Jeff Weaver said the CNN survey affirms the campaign’s claims that the senator, who trails Biden by 14, is on the right track heading into a critical stretch of the race.

‘The CNN poll confirms what we have consistently seen — Bernie Sanders in second place and moving up slightly following the second debate,’ Weaver told DailyMail.com. ‘As we enter the post Labor Day period he is well positioned to add even more support in state after state.’

Biden’s ad ties him to other themes that poll well with voters, including his service in the Obama administration.

In two frames, he speaks to Obama in tight shots in what appears to be the Situation Room. Two others mention the Affordable Care Act and Obamacare and Biden’s desire to maintain the programs the nation’s first black president championed.

The spot is otherwise full of imagery of Biden working with African-Americans, in a counter to claims that he was too friendly with segregationists in the Senate and blocked legislation that would have lifted up blacks before he joined Obama’s ticket.

Trump campaign manager Brad Parscale zeroed in on the Obama connection in a tweet responding to the ad on Tuesday morning.

‘It took @JoeBiden just 15 seconds before he mentioned former President Obama in his new campaign ad,’ he tweeted. ‘Obama couldn’t save Crooked Hillary and he won’t save Sleepy Joe.’