A beloved circus performer known as Grandma the Clown has been accused of pressuring a 16-year-old aerialist to pose for pornographic photos.

Barry Lubin, 65, resigned Friday from the Big Apple Circus, where he has performed for more than 25 years, after the alleged victim came forward in the wake of the MeToo and TimesUp campaigns.

He confirmed the allegations and has apologized, the circus’s chairman, Neil Kahanovitz, told The New York Times on Tuesday.

‘The allegations are true,’ Lubin said in a statement to The Times. ‘What I did was wrong, and I take full responsibility for my actions.’

The girl said she met Lubin, who dressed as a female clown in a grey wig, in 2004 at a performer’s camp for children. She was at first hired to work with the mini-troupe, but then Lubin persuaded her to model for his personal photography business in his trailer.

The clown reportedly told the teen the photos would be used for a Japanese paint-on tattoo company. He claimed they would superimpose the tattoos onto her body so she needed to show some skin.

She says he asked her to remove her underwear, which she refused, but eventually he persuaded her to undress and move her panties to one side as he continued to take photos. 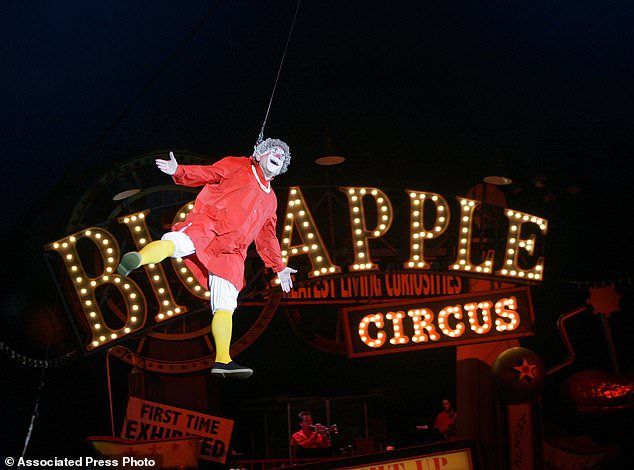 She said he paid her $100 for the photoshoot and asked her to return, although she never went back.

The acrobat said she contacted the police around 2011 or 2012 but was told that the statute of limitations had expired.

She the tried to contact the circus, but heard that Grandma was on hiatus. The circus said at the time there was little they could do.

Then last year, the woman, 29, who is now married and pursuing a doctorate in school psychology in Seattle, discovered Lubin was back at the circus.

She decided to reach out again this week and said that the circus’ new managers took action immediately.

The circus just finished its annual run at the Lincoln Center is will open in Alpharetta, Georgia on Friday, without Grandma the Clown.