A Sydney rapper who was shot multiple times in a Los Angeles gangland style assassination attempt says his girlfriend would have been killed if not for his forearm getting in the way of a bullet.

John ‘BIG Kash’ Lavulo was leaving his apartment block at Warwick Farm, in Sydney, at 9.05pm last Saturday night when a swarm of cars blocked him in and opened fire on his white Mercedes.

The 33-year-old rapper was shot in his right forearm and left shoulder, but somehow managed to escape the execution-style attack and drive himself to a nearby hospital.

Lavulo has undergone multiple surgeries in they days since and was at one point told by doctors his arm may be amputated – but they now say that will not be necessary.

Speaking to Daily Mail Australia from his hospital bed, he told how if his forearm had not been on the steering wheel a shot would have hit his girlfriend – who was ducked down in the passenger’s seat – in the head. 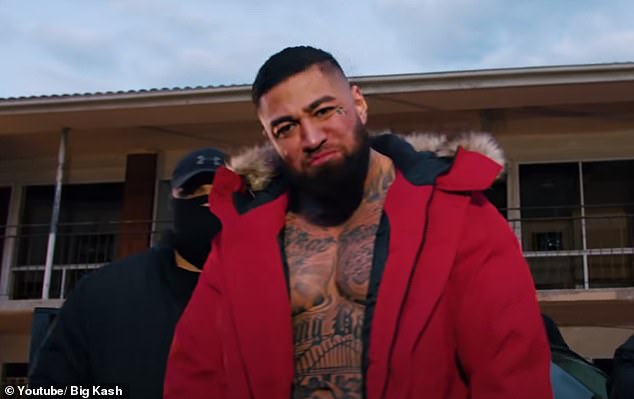 The ex-bikie turned rapper, ‘BIG Kash’ was shot multiple times as he sat in his white Mercedes outside his apartment block at Warwick Farm, in Sydney’s west, about 9pm. His girlfriend was in the passenger’s seat and narrowly escaped with her life, despite being an innocent party

‘I’m always very alert, so when I was out on the street I was checking the cars and my missus goes to me: “What are you doing?”,’ Lavulo said.

‘As soon as I started driving this red car pulled up behind me and then as I got out of the gate they surrounded me and blocked me in, but I knew they were pretty dumb.

‘I just remember them pumping shots into the drivers seat, but they were amateurs.

‘There were three cars of them and I just had to get out of there so when they started shooting I just gunned it backwards (into reverse), I hit the car behind me but it spun my car and I could get out of there.

‘I had my hand on the wheel and one of the bullets hit me in the forearm, otherwise it would have killed my missus.

‘You don’t go ambush a bloke when he’s with his missus or his family.’

Police are currently investigating whether the shooting was related to BIG Kash’s links to the Hells Angels or Comanchero OMCGs, or Sydney’s rap music scene.

A NSW Police spokesperson said on Wednesday that inquiries were continuing. 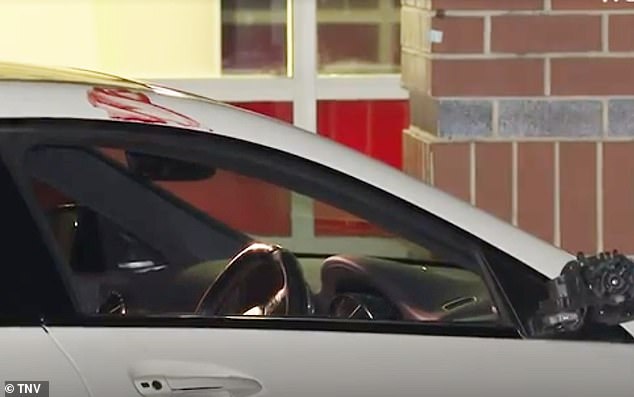 Lavulo somehow managed to escape the gangsters as they fired shots into his car and drove to a nearby hospital, pulling up on the footpath outside (pictured) 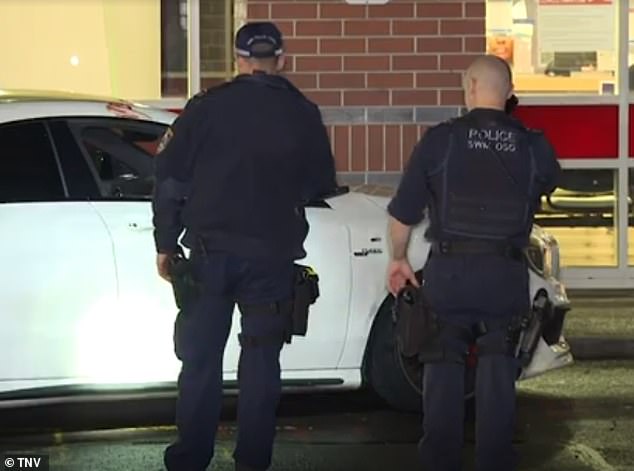 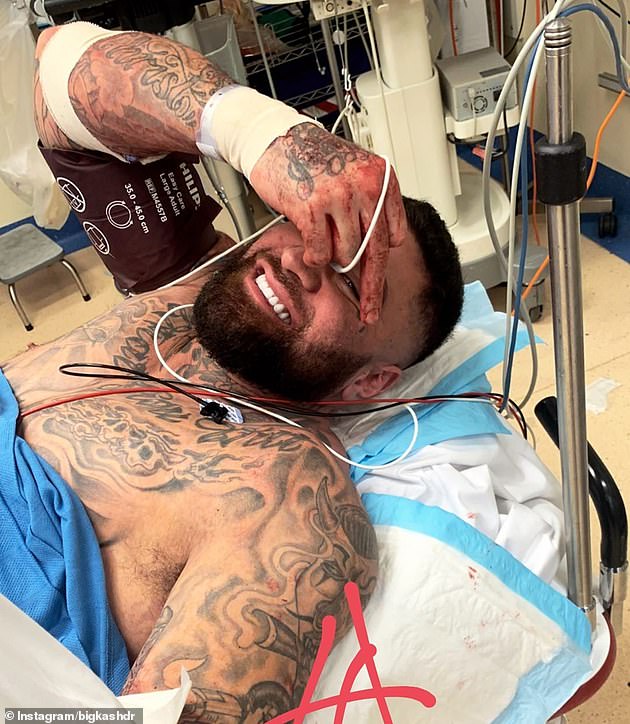 He later shared a photo on Instagram of him in bed at Liverpool Hospital where he underwent surgery for a gunshot wound to his arm.

Afterwards they returned home to pick up some alcohol, before leaving to see more friends.

It was as they left the unit complex that the gangsters attempted their assassination.

Officers arrived at the scene on Lachlan Street before moving to Liverpool Hospital, where BIG Kash’s bloodstained white Mercedes was parked on a footpath outside.

In the hours after his narrow escape the rapper shared a photo of himself in hospital on Instagram to let his 38,000 followers know he was doing okay.

Laying on a bed cabled to a machine, he can be seen smiling for the camera as his blood soaked hand makes a rude gesture in front of his eyes.

Lavulo made a splash in the rap scene under his moniker BIG Kash and the notorious mixtape ‘K.O.A’ (Kash On Delivery), released in 2016. 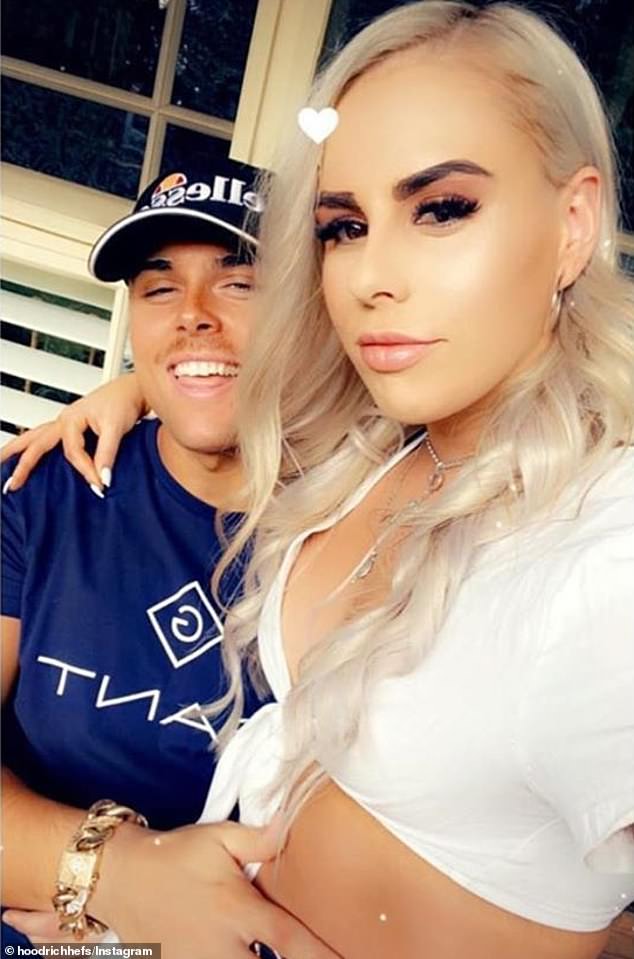 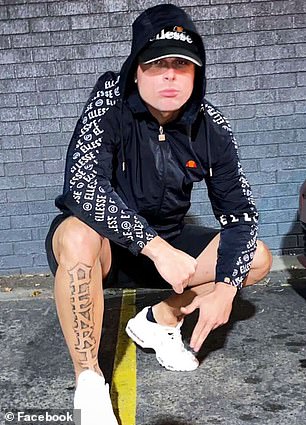 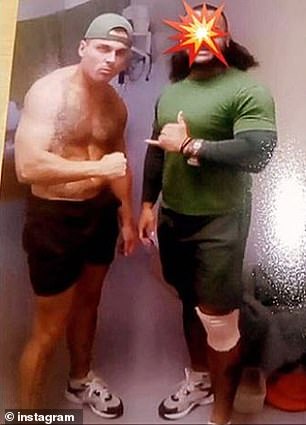 Like BIG Kash, Valeri is a former bikie turned rapper (left). He filmed some of the footage used in his rap videos while in prison (right)

He says his move into music came after becoming disillusioned with the bikie game.

‘I got to a certain point where I felt I was throwing my life away,’ Lavulo said.

‘An old Hells Angels mate of mine Tyrone Slemnik was gunned down and you look at things different.

‘When lives are getting lost, it’s a different story to what it’s made out to be.’