Sometimes it’s tough at the top, as the Premier League’s Big Six clubs learned this week amid the continued fallout from the ill-fated European Super League.

Over in the North West, Manchester United tripled their security at their training base over anti-Glazer protests, Abu Dhabi-owned Manchester City played a £1billion game of football against Qatar-owned PSG, and reports from Liverpool say that the owners ‘rejected a £3billion bid from the Middle East to take over the club’.

In London, three Arsenal legends join a billionaire Spotify owner in a bid to buy the club, Chelsea owner Roman Abromovich is ‘furious’ at being blindsided by the Super League criticism and Tottenham fans plan a final game protest against owners ENIC.

Here’s everything you need to know… 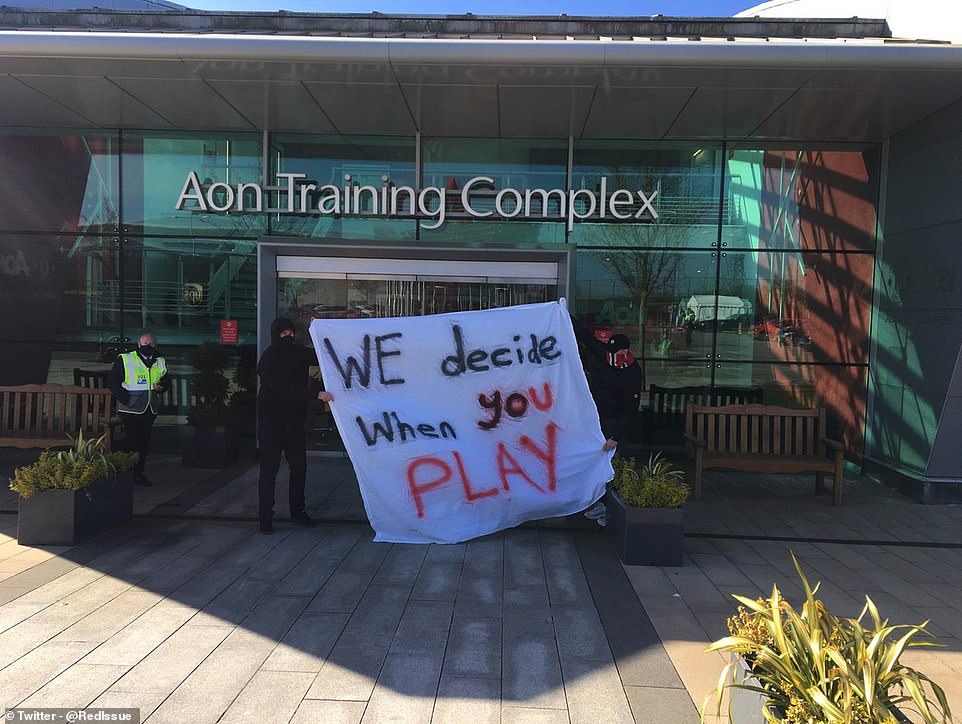 MANCHESTER UNITED TRIPLE SECURITY PRESENCE AMID FAN PROTESTS: Manchester United have trebled security at their training base and increased protection around senior executives as concerns mount over anti-Glazer protests. It comes amid reports that United players and staff were shocked at how easily protesters were able to breach security at their Carrington training ground on Thursday before confronting manager Ole Gunnar Solskjaer over the axed Super League project. 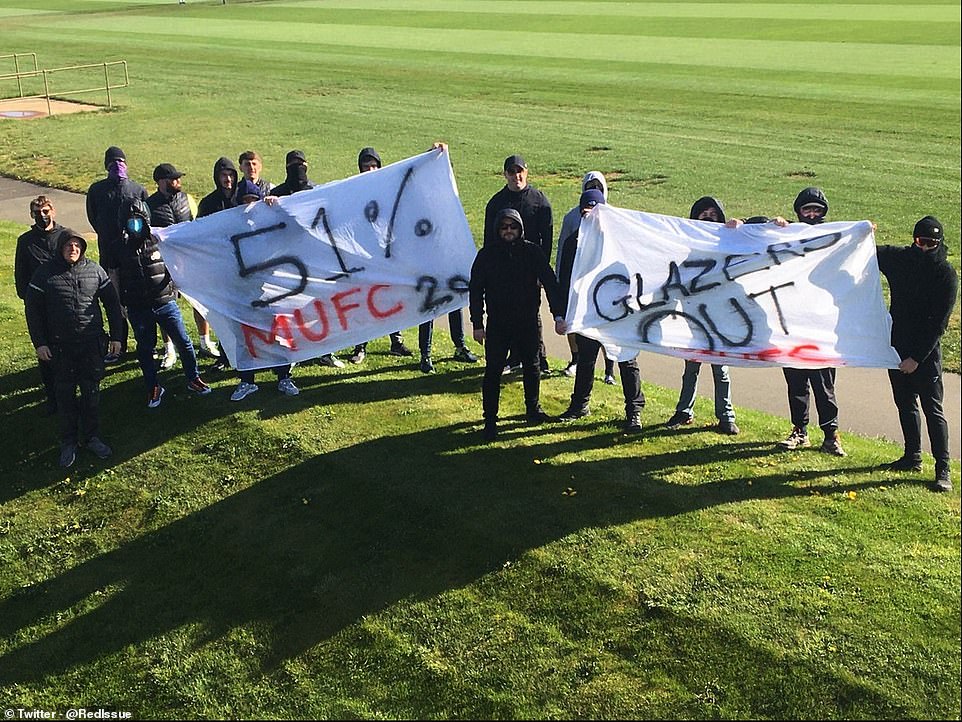 Fans also demonstrated against the Glazers outside Old Trafford and flew a banner over Elland Road before Sunday’s 0-0 draw at Leeds, calling for the American owners to go following the collapse of the European Super League. It is understood that increased protection has also been offered to senior figures based in London. 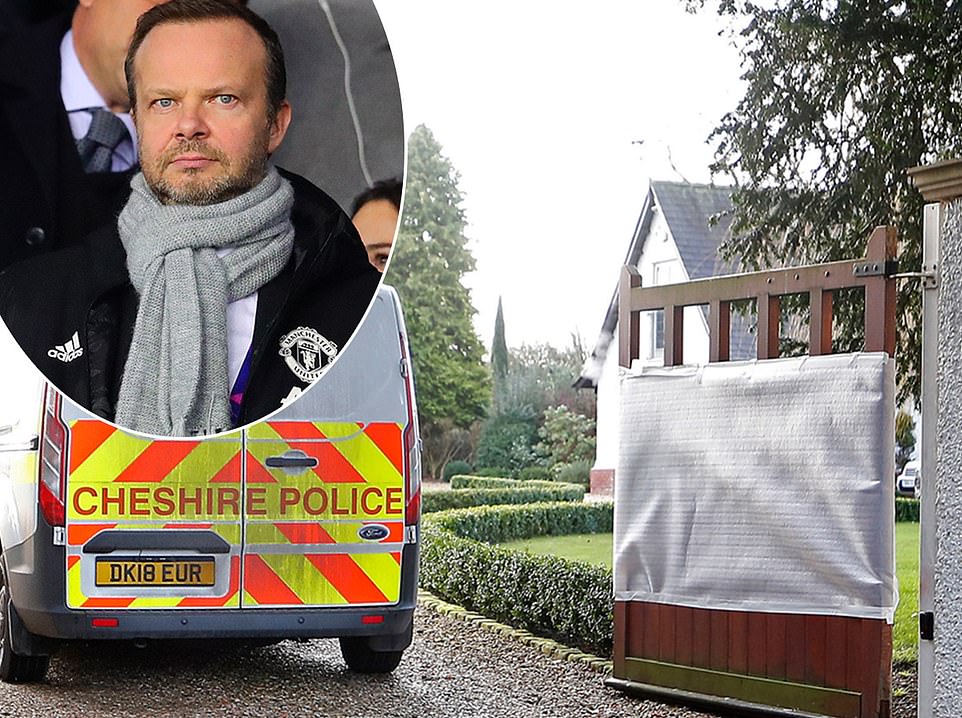 Masked protesters also reportedly attacked the home of Manchester United executive vice-chairman Ed Woodward last week. Several United fans attacked the £2million Cheshire mansion shortly after approximately 20 fans turned up to the club’s Carrington training ground to protest their involvement in the now-defunct Super League, according to Sky Sports. The gates were reportedly damaged during the attacks, although no one was inside the property at the time. 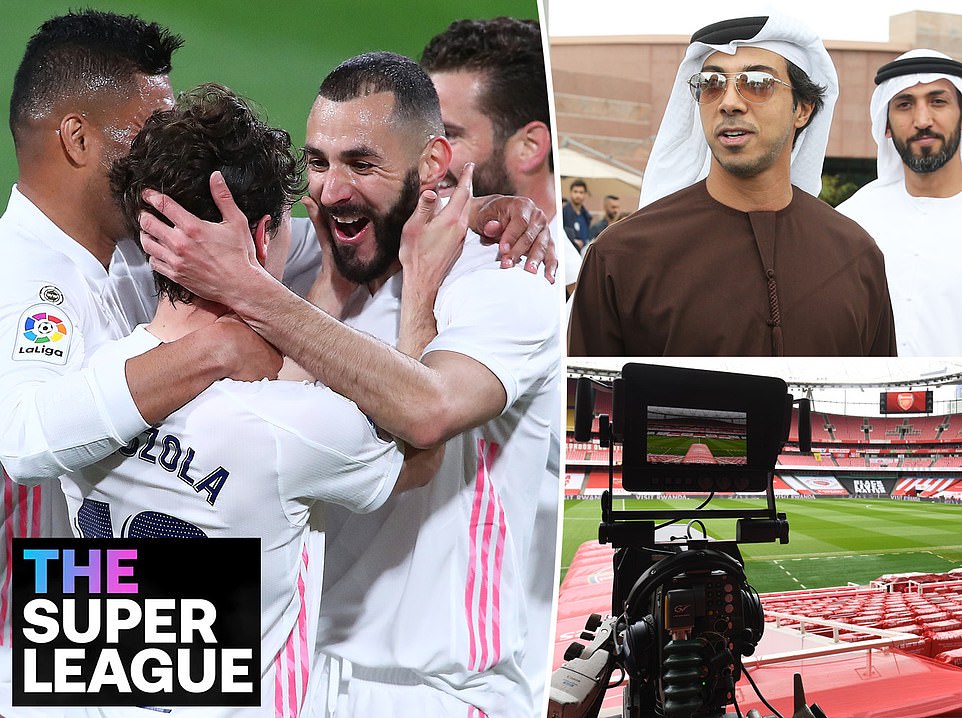 SUPER LEAGUE CONTRACTS ARE LEAKED REVEALING HUGE ‘BREAK-UP FEE’: Details of the European Super League contracts signed by all 12 rebel clubs have been leaked online with some startling detail about the riches on offer.

German outlet Der Spiegel has released a few pages of the document, which was agreed to by the Premier League’s Big Six. They include a massive ‘break-up fee’ for those wishing to withdraw from the competition. It says that clubs who pull out of the Super League face a ‘£130million’ penalty fee, which would be a huge blow to the six Premier League clubs and others who have withdrawn their support. The leak came after Super League clubs were handed a boost on Friday when UEFA determined they would not hand them sporting punishments. 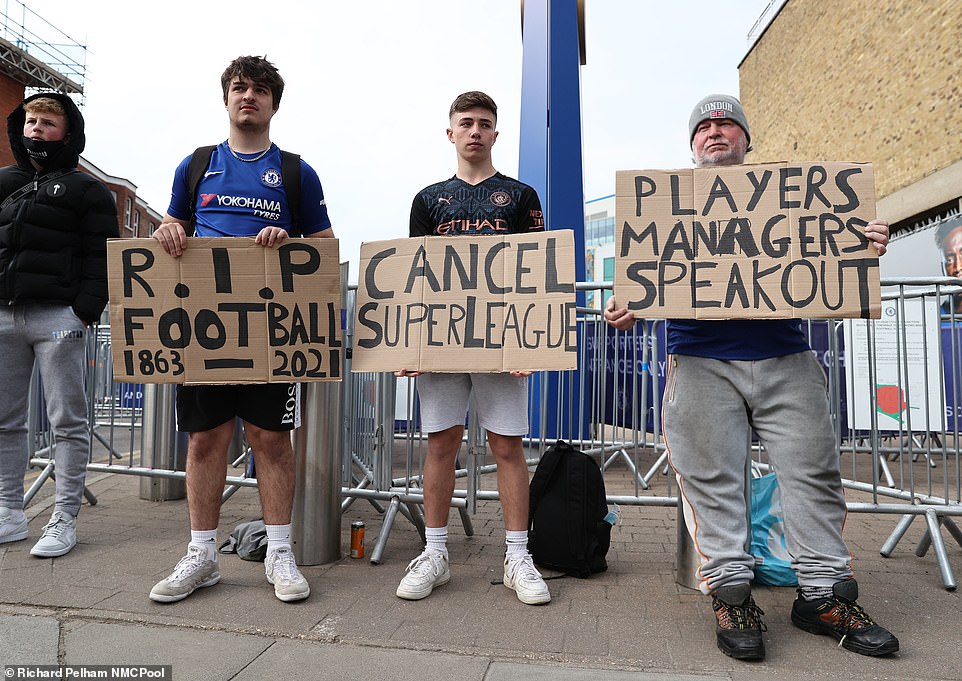 PROSPECTS OF THE BIG SIX BEING CHARGED ‘RECEDING’: The prospect of the Premier League bringing charges against England’s Big Six clubs for signing up to a European Super League is ‘receding by the day’, according to leading sports lawyers. The appetite among fans and pundits to see the English clubs punished for their part in the breakaway project is undiminished more than a week after the scheme was revealed. 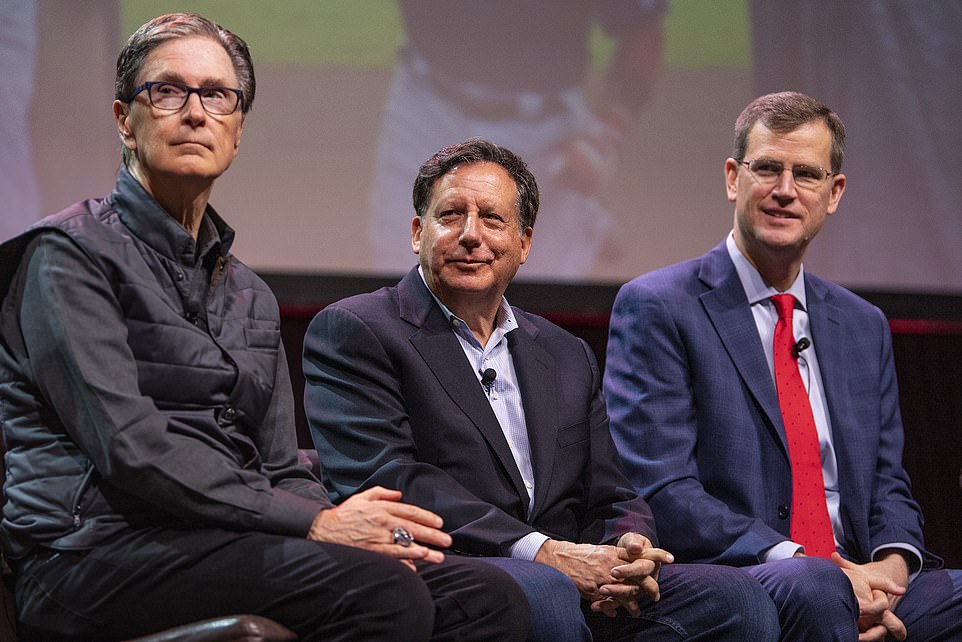 However, experts in sports law have told Sportsmail that they believe such clear-cut actions are increasingly unlikely and anticipate the top flight will seek a more ‘pragmatic’ solution, or ‘fudge’. ‘There is a view that if they were going to charge the clubs they would have done so already,’ said Dan Chapman, a solicitor and Head of Sports Law at Leathes Prior. Pictured: Liverpool’s FSG owners, including principal chief John W. Henry (left) and chairman Tom Werner (centre). 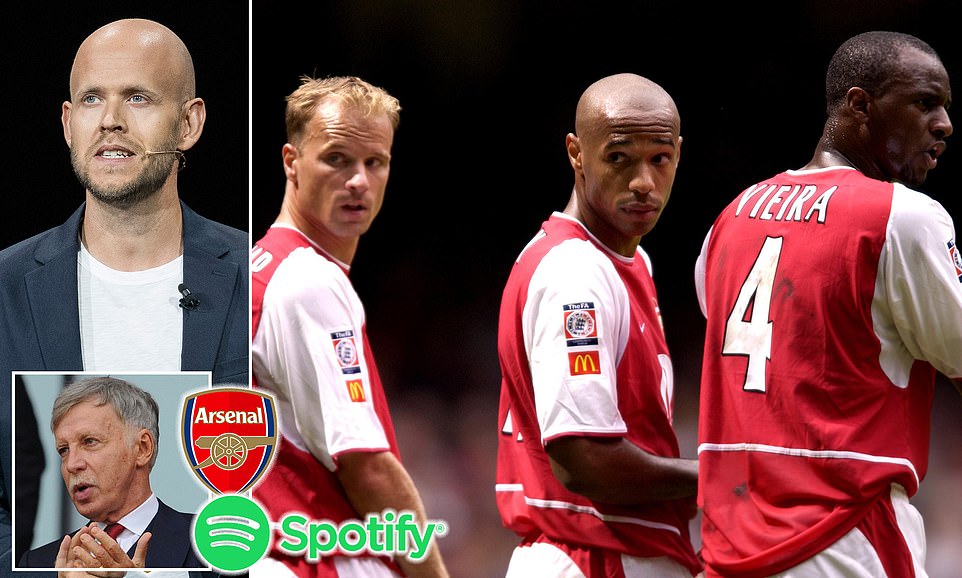 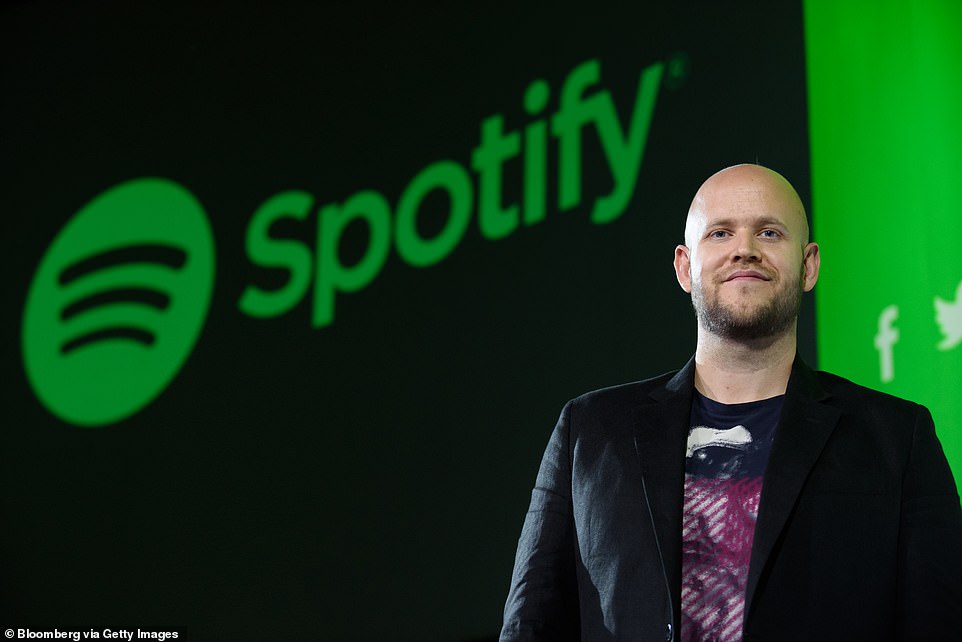 Spotify CEO Daniel Ek (pictured), estimated to be worth around £3.4billion, revealed his plans to try and buy his boyhood club from Stan Kroenke and is determined to test the American billionaire’s resolve despite the Arsenal owner’s insistence that he has no intention of selling. Arsenal insiders are sceptical about the seriousness of Ek’s interest and whether he genuinely has the money to buy the club. Their suspicions have been further raised by the public nature of his interest. 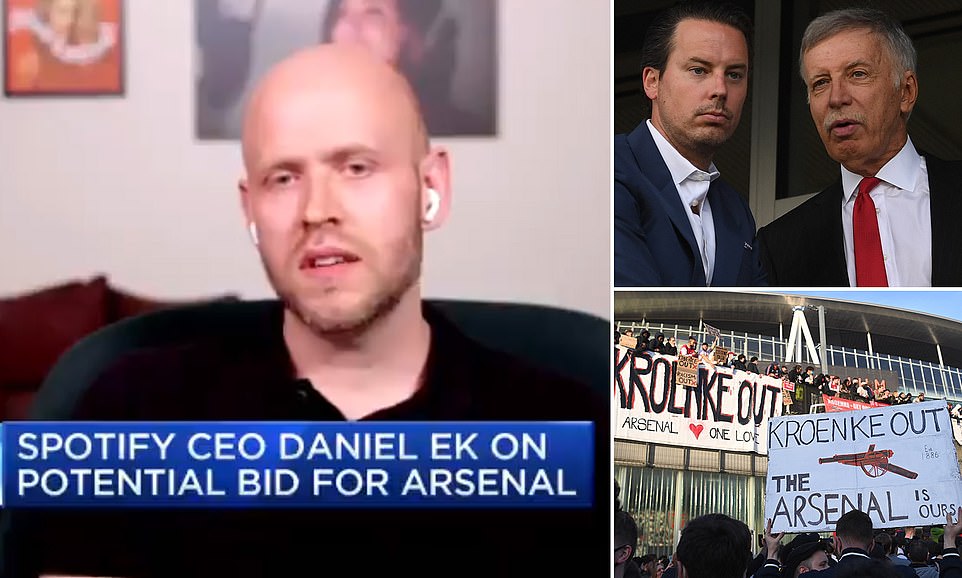 Speaking about his interest last Friday, Swedish billionaire Ek told CNBC: ‘I’ve been an Arsenal fan since I was 8 years old. Arsenal is my team. I live the history, the players, and of course I love the fans. I want to establish trust with the fans and engage the fans again. So, I’m very serious. I have secured the funds for it and I want to bring what I think is a very compelling offer to the owners and I hope they hear me out.’ 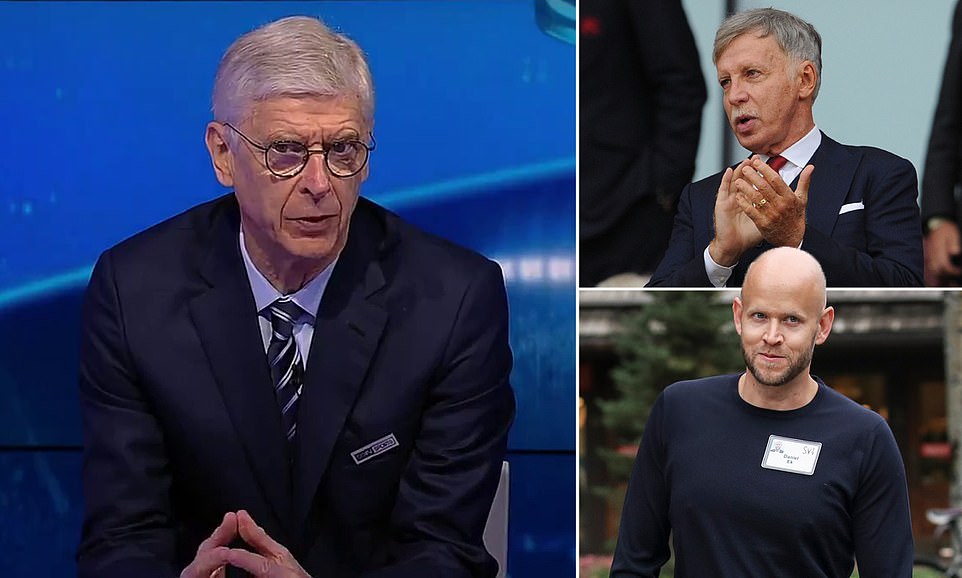 Former Arsenal boss Arsene Wenger has admitted he would ‘help’ Arsenal in any way possible and suggested he is in favour of his former stars being involved in a potential takeover bid. Speaking to beIN Sports, the 71-year-old Frenchman said he would help however he could but believed deals such as these are best done away from the public eye. ‘I like the fact that former people of the club run the club,’ Wenger said. ‘For the project, the best deals are made when nobody knows about it and you come out and it is done.’ 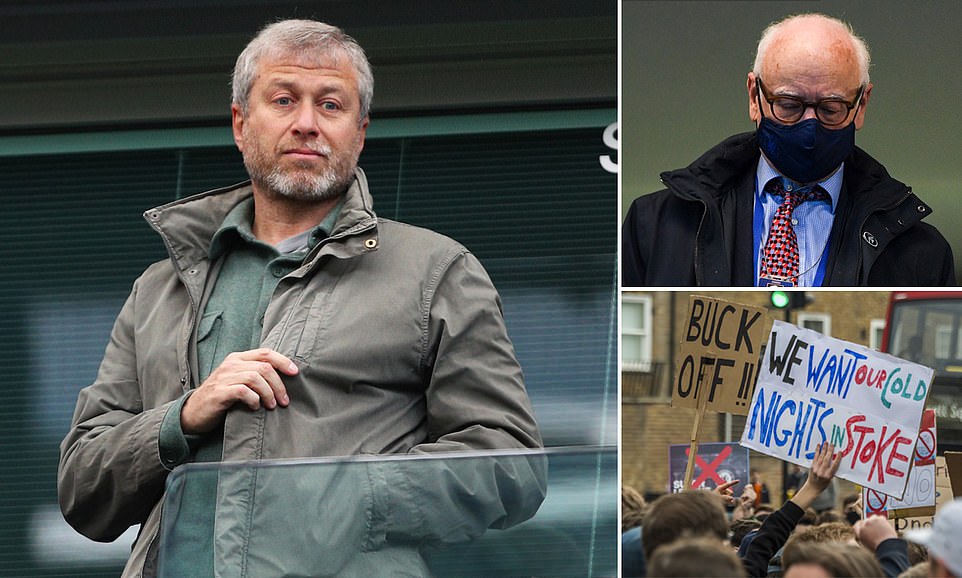 CHELSEA OWNER ‘FURIOUS’ AFTER BEING ‘BLINDSIDED’ BY SUPER LEAGUE CRITICISM: Chelsea owner Roman Abramovich is said to be ‘furious’ and concerned for his legacy after being ‘blindsided’ by the backlash at the club’s willingness to take part in the axed European Super League. The Blues and the rest of the Premier League’s Big Six all signed up to a breakaway competition, but within 48 hours it collapsed amid backlash from fans, players, managers and pundits. Chelsea were one of the first teams to withdraw, along with Manchester City. 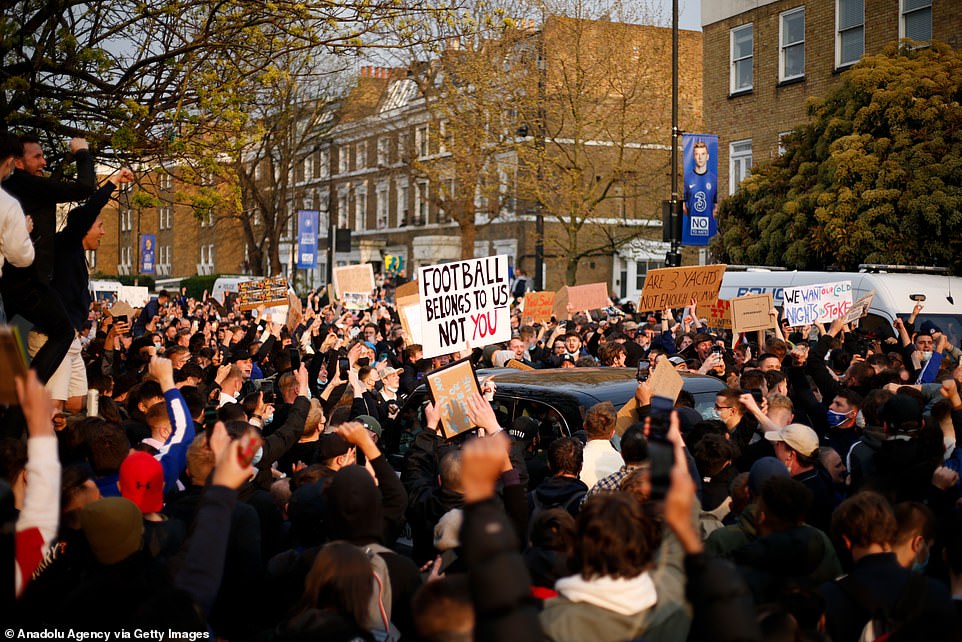 According to The Mirror, Abramovich ‘trusted’ the judgement of Chelsea chairman Bruce Buck that joining a closed Super League was in the best interests of the club. Abramovich, who bought Chelsea in 2003 for £140million, is said to have ‘concerns’ over his legacy and reputation among the club’s fan base after signing up to the Super League. 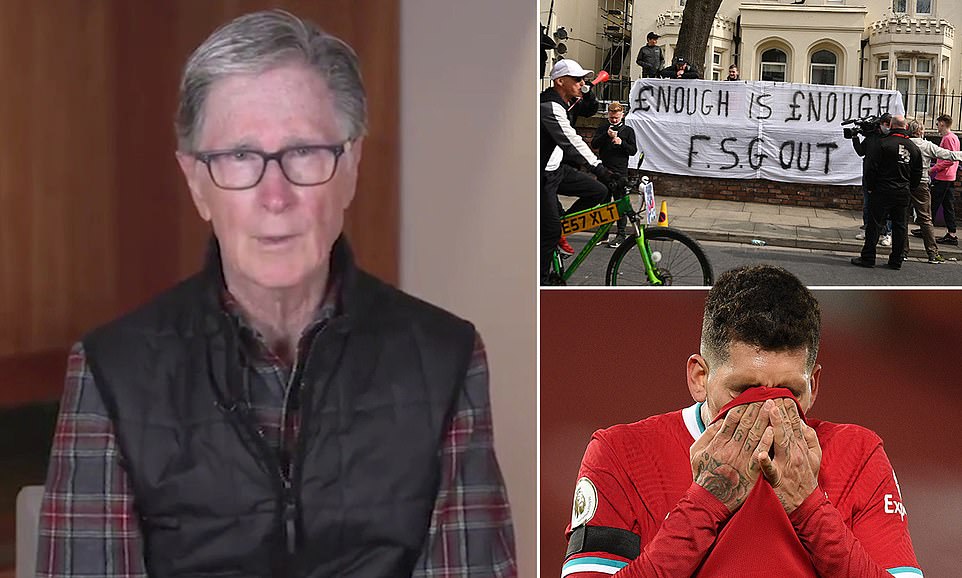 LIVERPOOL OWNERS REJECTED £3BILLION MIDDLE EAST TAKEOVER BID: Liverpool’s owners, Fenway Sports Group, have rejected a takeover bid for the club for around £3billion, according to the Mirror. The report has said that the bid was made before the announcement that the Premier League champions would become a founding member of the controversial European Super League, which saw tremendous backlash and protest from fans. It is believed that the bid was made from the Middle East. 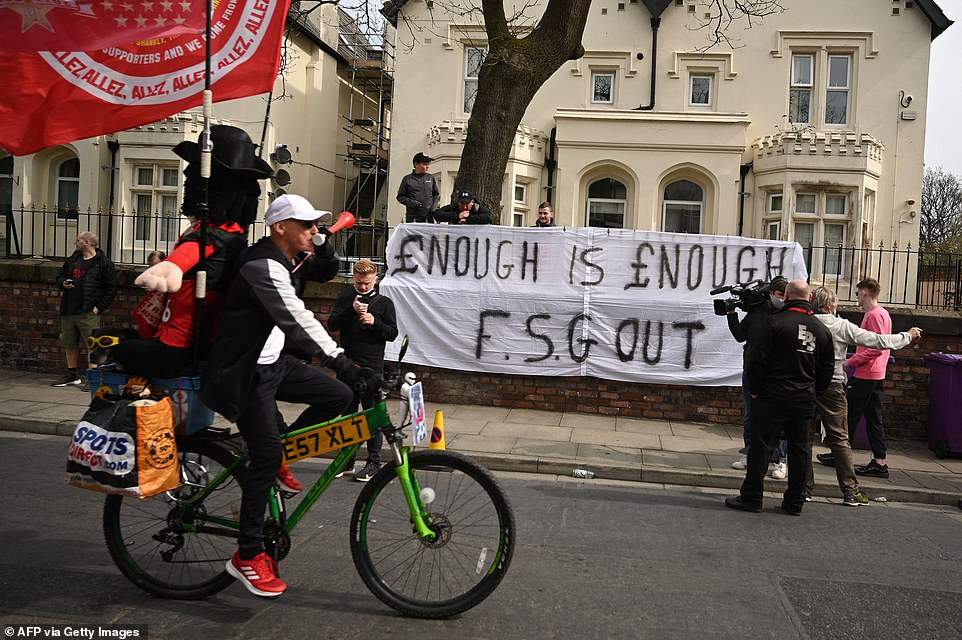 Earlier in the month, FSG sold a 10 per cent stake in the club to RedBird Capital for £543million, showing in some sense that their interest in Liverpool was waning. However, their resolve was tested once again with a bid from the Middle East and they stood firm to hold onto their remaining stake in the club. But Henry and Werner could now have a change of heart amid the fallout from the supporters and take home a tidy profit on their £300m investment. 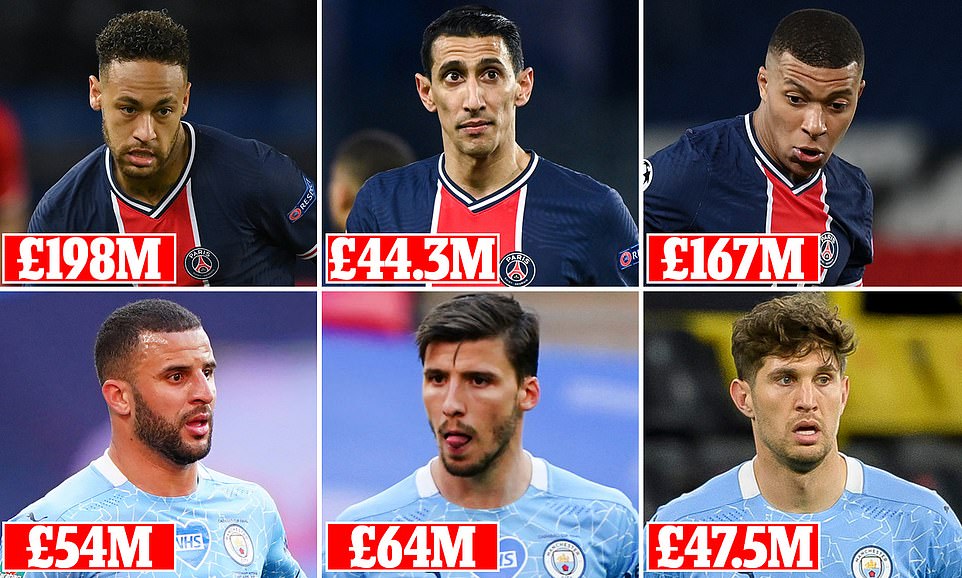 THE £1BILLION GAME OF FOOTBALL: No clubs in Europe have mobilised themselves with cash quite like Paris Saint-Germain and Manchester City. Hundreds of millions have been spent to build super teams capable of going all the way in the Champions League and the two clubs’ starting line-ups in both legs of the semi-finals could combine to be worth more in fees than £1billion. 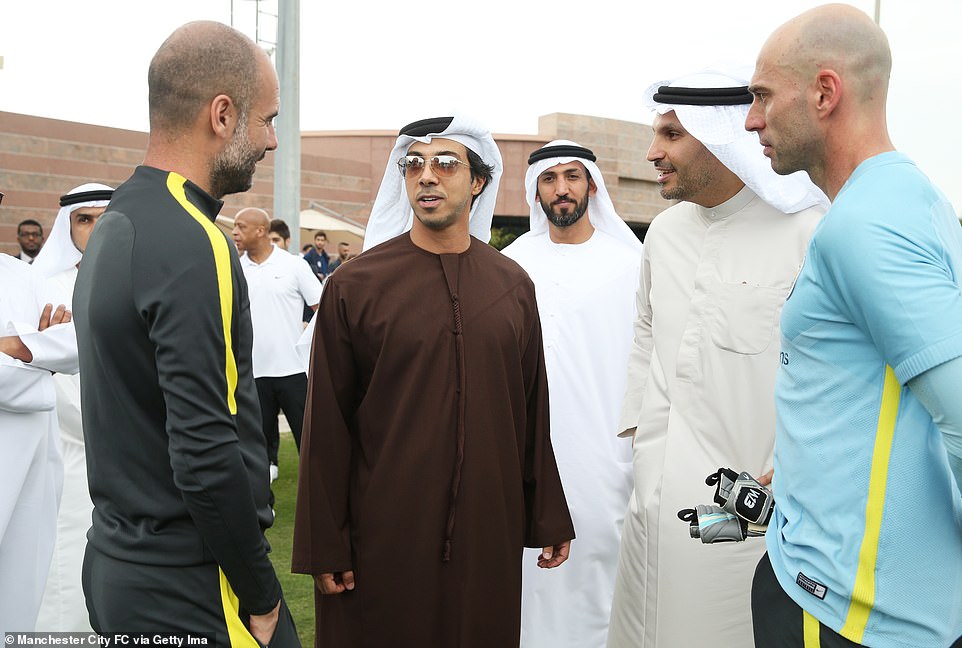 For PSG, owned by the state of Qatar, their resources are plentiful so long as oil continues to sell and there is no sign of money drying up. It is a similar situation at City with their Abu Dhabi owners (pictured). They are so well remunerated through their own oil investments in Abu Dhabi and they are so healthy in their accounts it was no surprise to see City among the first to backtrack from a European Super League. 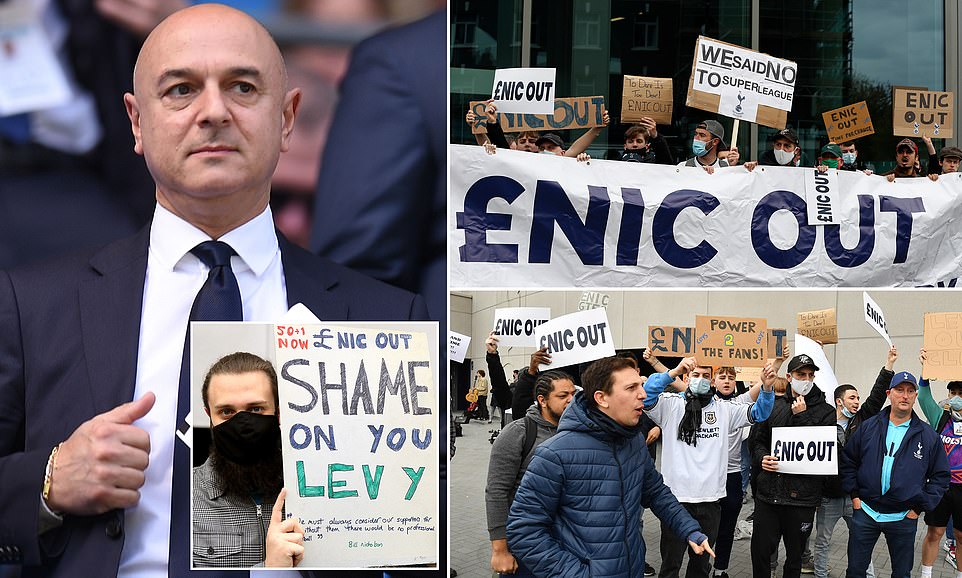 TOTTENHAM SUPPORTERS PLAN FINAL GAME PROTEST AGAINST OWNERS: The Tottenham Hotspur Supporters’ Trust is planning a protest against the club’s owners in their final home game of the season against Aston Villa. The move comes after the fan group called for the club’s executive board – chairman Daniel Levy and owners the ENIC group – to resign in the wake of their involvement in the failed European Super League plan, insisting ‘change is coming’. 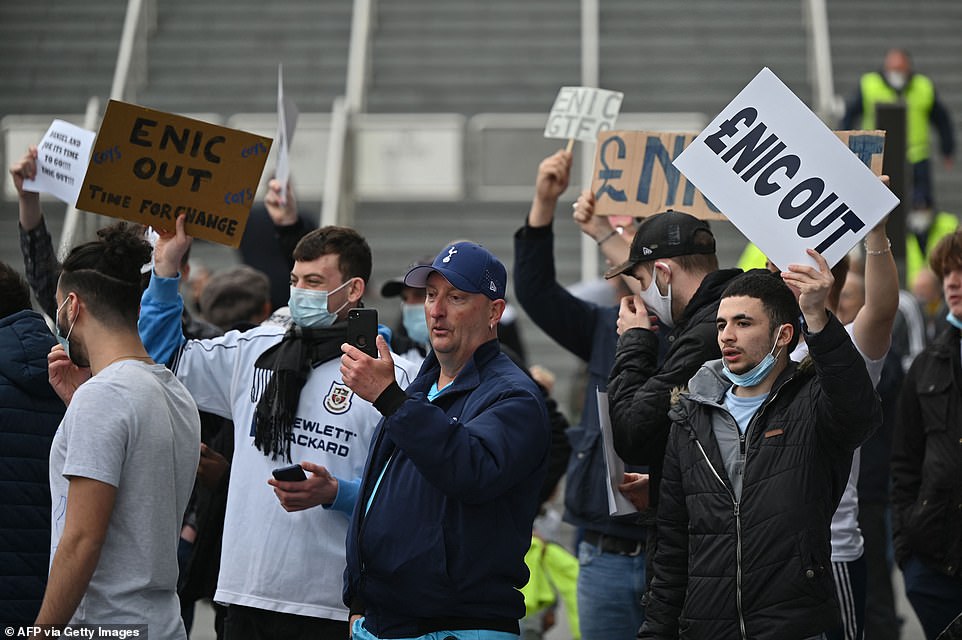 With up to 10,000 supporters expected to be allowed in for the Villa game early next month, the Tottenham Hotspur Supporters’ Trust is planning an organised protest. It said in a statement: ‘Events of the last week have demonstrated beyond doubt that there must be change at Tottenham Hotspur Football Club. The actions of the current executive board have inflicted substantial reputational damage on our club as a result of their involvement in the discredited European Super League, risking damaging consequences. We know there is growing supporter anger with the current club board and owners. We understand that. We need to focus that anger.’ 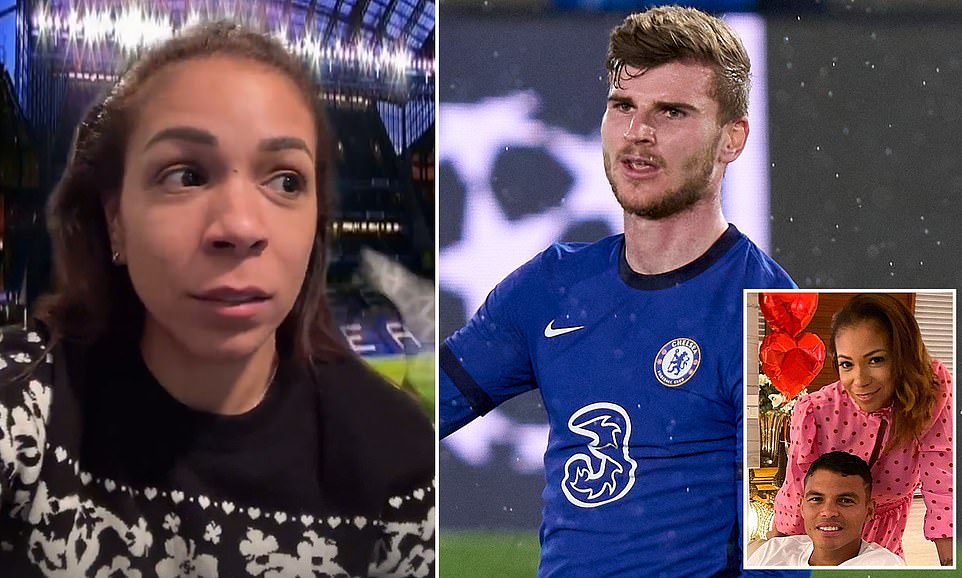 THIAGO SILVA’S WIFE HITS OUT AT TIMO WERNER FOR STRING OF MISSES: Thiago Silva’s wife has taken to Instagram to launch an attack on his Chelsea team-mate Timo Werner following the club’s 1-1 draw with Real Madrid in the Champions League on Tuesday night. Isabele da Silva was left less than impressed with Werner’s performance after he failed to score from six yards out after nine minutes of the game, and took to social media to criticise the German striker, claiming he ‘keeps missing goals’ and that he doesn’t ‘want to score’. 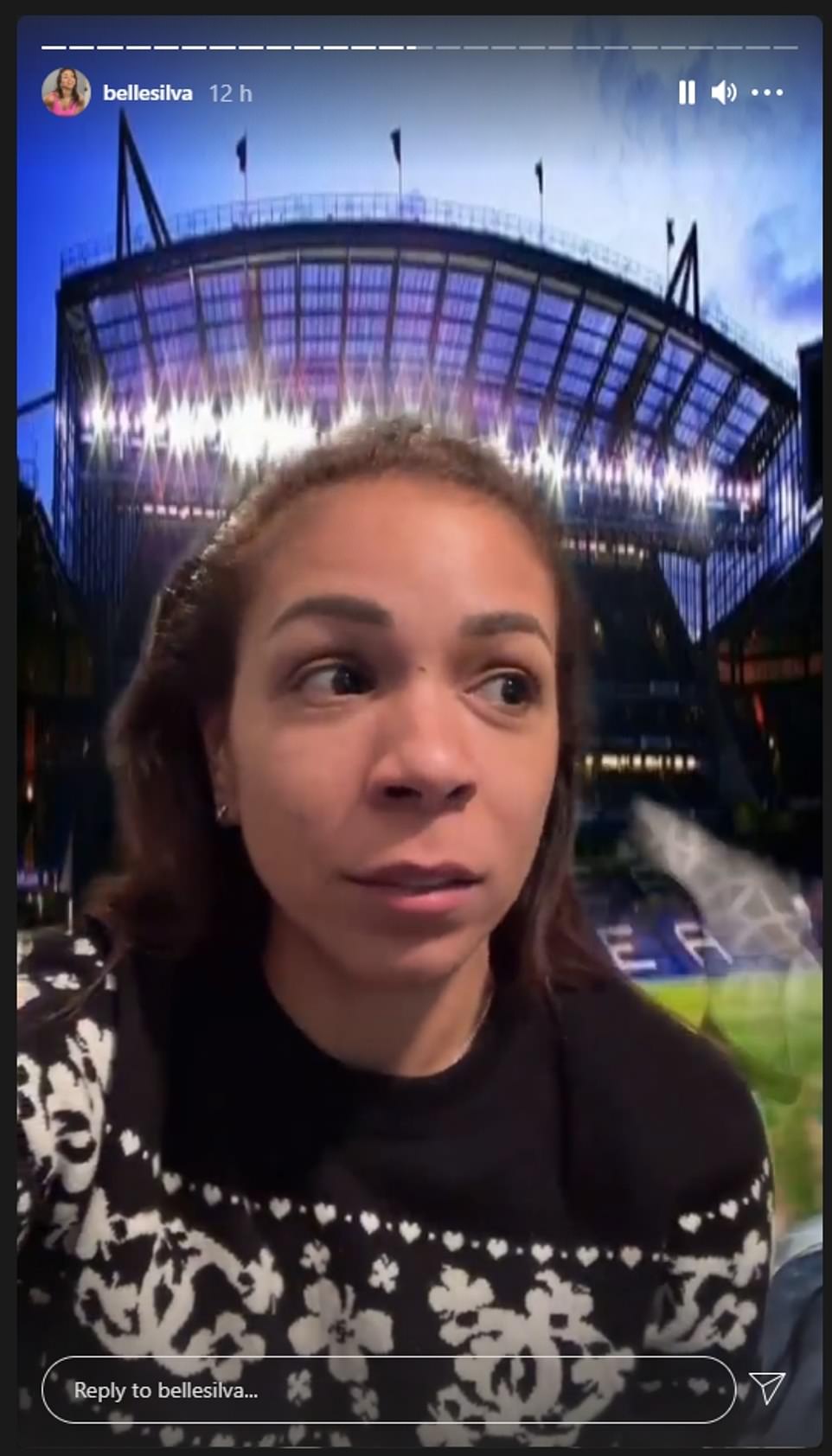 Speaking on her Instagram story, Isabele said: ‘This is karma, guys. Every team I go to there is a striker who keeps missing goals… this Werner, what is his name?’ In a second video she added: ‘We need a goal, we need to win this match but my attackers don’t want to score, I don’t know why they don’t score.’ 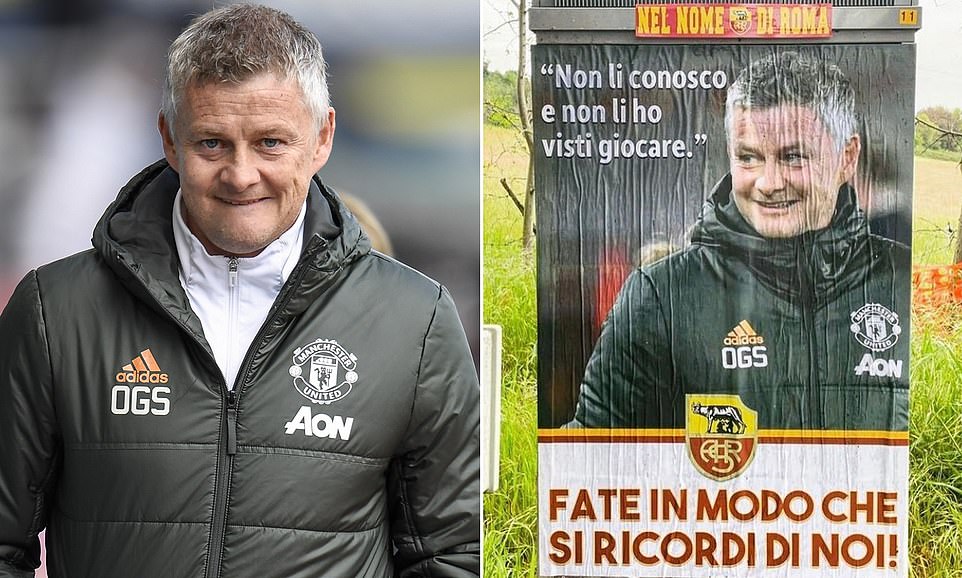 SOLSKJAER IN HOT WATER OVER ROMA COMMENTS: Ole Gunnar Solskjaer has moved to ease tensions with Roma fans ahead of Manchester United’s Europa League semi-final clash with the Italians. Solskjaer felt the wrath of the Roma ultras after they opted to place posters of him outside the club’s training ground, after the United boss said of Roma: ‘I don’t know them and I haven’t seen them play’. In fury, large posters of Solskjaer were put up outside the training complex in the Italian capital which had ‘make sure he remembers us’ written underneath. 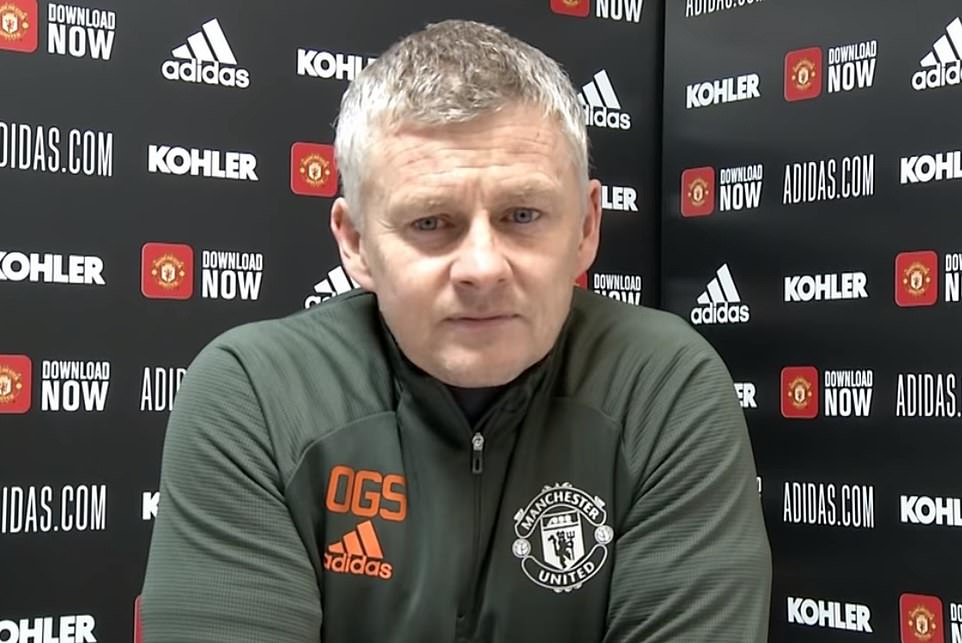 Solskjaer addressed the issue during his pre-match press conference. He said: ‘That [comment] was straight after the game, I was just relieved we had gone through. I have watched them but not analysed in depth to give them enough respect. [Roma are] A fantastic club. I have a Totti shirt and a De Rossi shirt I swapped with them! We have analysed them since. We are ready for them. It was not meant as any disrespect.’ 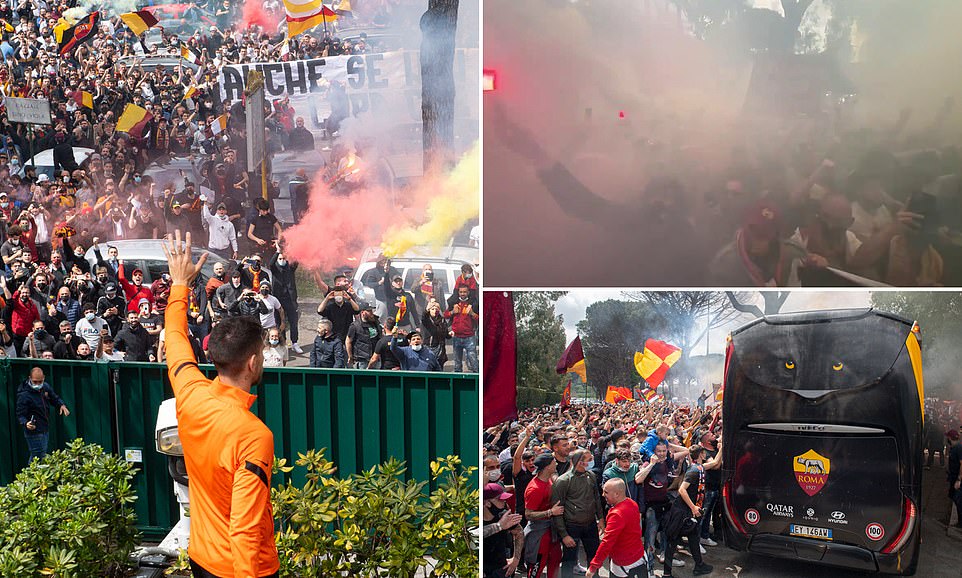 Roma fans again showed their passion for the club after hundreds turned up at the training ground to send them off to Manchester on Wednesday. The Serie A giants have not lifted a trophy since the Coppa Italia in 2008 and only have one European honour in the 1960-61 Inter-Cities Fairs Cup, which they lifted by beating Birmingham City. If the game itself wasn’t enough motivation, the fans ensured the players are well aware of how important it is by cheering them off in huge numbers. 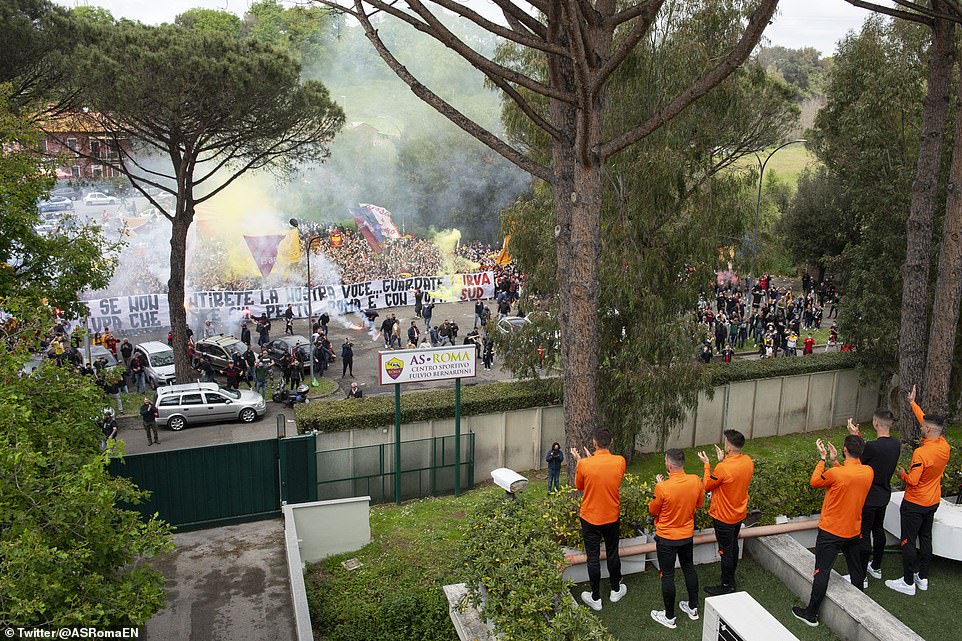 As the players headed to the airport for their two-and-a-half hour flight to Manchester, they were met by a sea of Roma fans, desperate for a glimpse of their heroes as they boarded the bus. The players stood on a balcony from inside the training complex to wave at their adoring supporters, before boarding the coach to the airport.