Big supermarkets will close on Easter Sunday despite coronavirus pandemic

Shoppers keep their distance from one another outside a Sainsbury’s in Durham on Wednesday, as the spread of coronavirus continues. Queues could be even longer on Saturday as stores prepare to close for Easter Sunday 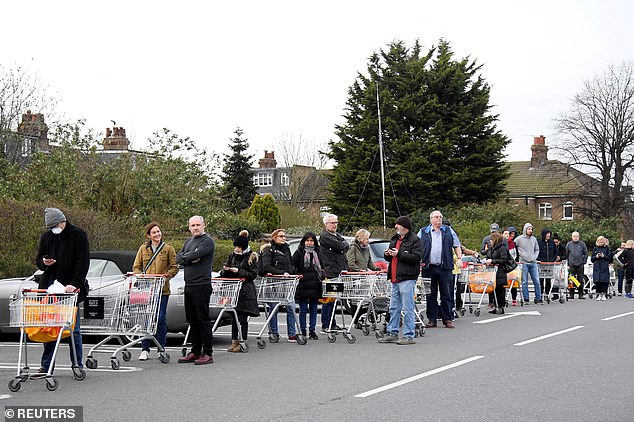 Most supermarkets now have two metre lines to keep customers apart. Shoppers heading into the west London Sainsbury’s were closer together during a long queue on March 20 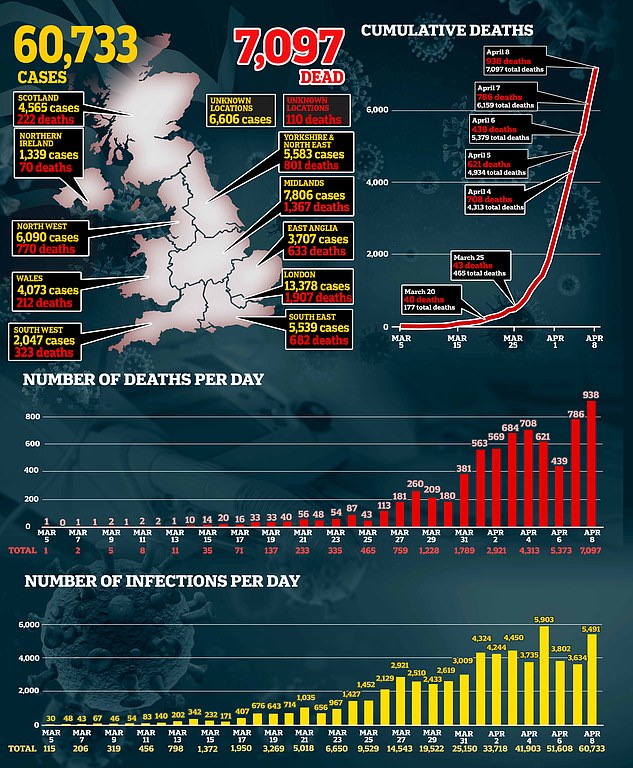 Which shops have to close on Easter Sunday?

The Department for Business, Energy and Industrial Strategy have clear guidelines on which stores can and can’t open on Easter Sunday.

Any shop over 280sq metres must stay shut for the full day.

There are exemptions, these are the ones listed on gov.uk:

‘Most of our shops in England, Wales and the Channel Islands will be closed on Easter Sunday, and open for shorter hours on Good Friday and Easter Monday,’ Bérangère Michel, executive director of customer service at Waitrose wrote to customers, according to The Times.

He added ‘We are continuing to limit the number of customers in our shops, and introducing further measures to ensure everyone keeps a safe distance once inside. Unfortunately, that will sometimes mean queues, but these do move quickly and many of our stores are quieter after 6pm.’

Larger stores, including supermarkets, normally open on reduced hours on most Sundays, but twice a year they must close. On Easter Sunday and Christmas Day.

The rules do not apply in Scotland, however.

A Sainsbury’s spokeswoman said: ‘As with previous years, the vast majority of our supermarkets will be open from 8am to 8pm on Good Friday and some of our Sainsbury’s local stores will be open on Easter Sunday.

‘Some of our supermarket opening hours will also vary, so it’s best to check our store locator for details.’

Morrisons, which normally pulls in around 11million customers each week, did not offer a formal comment when approached by the MailOnline.

A spokeswoman replied to our request for comment by saying: ‘We would expect people to shop how they normally do around Easter time.’

Asda said its stores would be open over the Bank Holiday Friday and Monday, but shut on Easter Sunday.

Britain’s lockdown and social distancing guidelines mean  there have already been long queues stretching around supermarkets as people head out for their weekly shops.

With Sunday’s closure looming, shoppers are now being warned to get their shopping done ahead of time. 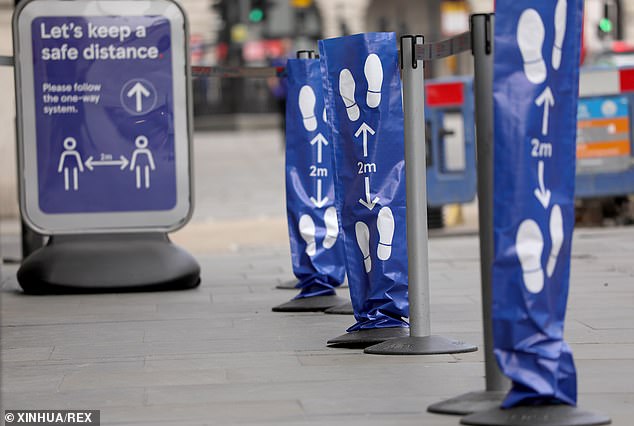 Shoppers are told to ‘keep a safe distance’ by signs at a Tesco in London on Wednesday, but queues could start to build in the coming days 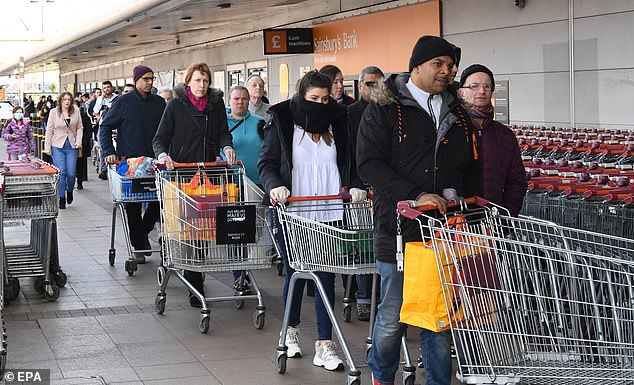 Before the social distancing rules were put in place, there were still long queues to get into Britain’s supermarkets. Shoppers in south London are pictured heading into a Sainsbury’s on March 22 to stockpile 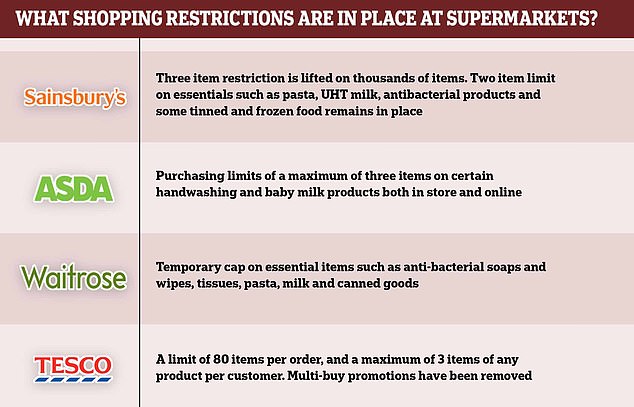 A senior industry figure told The Times: ‘Some of the bigger retailers are concerned about greater queues but few are clamouring to open. Most believe that they wouldn’t get a whole lot more sales — maybe they would pick up a bit extra from convenience stores — but it would just mean a lower average sale for the rest of the week.’

Shopping for essentials is one of the few reasons Brits are allowed to leave their home, aside from exercise, travelling to work where necessary and picking up medication.

Supermarkets struggled to cope with demand since Britain was locked down more than two weeks ago, many of their delivery websites crashed under the sudden influx of bookings, while caps had to be placed on certain products.

Yesterday Sainsbury’s revealed it was lifting its three-item cap on thousands of products, but a two-product limit on essentials was kept in place.