Beware this XL-size bore! It’s based on the 1988 Tom Hanks film about a 12-year-old boy, Josh Baskin, who is magically granted his wish to be bigger. Josh leaves home and his mum, and gets a job with a toy manufacturer in New York, whose cranky but loveable president (Matthew Kelly in full twinkle mode) is thrilled to have a guy on board who – unlike his sharp-suited sales force – really knows what kids want from a toy.

Boybander Jay McGuiness plays Josh, opposite former Girls Aloud singer Kimberley Walsh as Susan, the emotionally bruised marketing executive who falls for this weird man-child who can barely dress himself.

Josh gets a cool apartment, which he fills with toys, a Coke machine, a bunk bed – and Susan. It’s best not to think too hard about a 30-something woman having – in effect – an affair with a pre-pubescent. 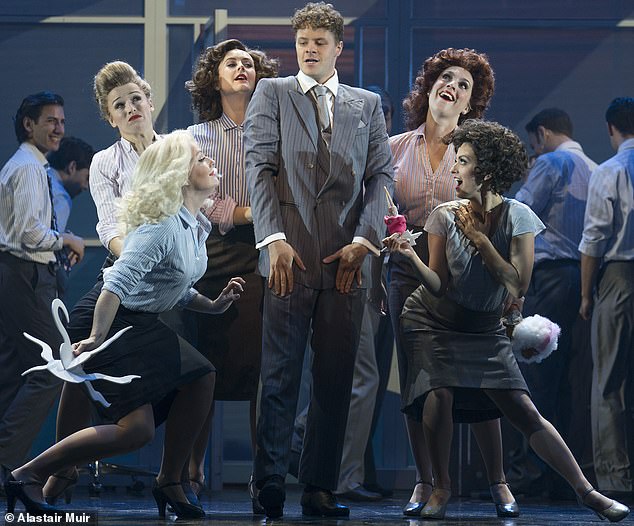 Anyway, Josh tires of adult life and its desires, and wants to go back to his childhood and his mum. She is played by Wendi Peters – no offence but she looks old enough to be his granny – wearing a permanent horseshoe frown, as well you might in such a lousy role.

Tom Hanks made the film a big hit with his all-redeeming charm. While McGuiness and Walsh are perfectly proficient, there’s little spark between them. Even if there was, nothing would banish this show’s Stilton pong.

This is not a new musical: it’s an upgrade of a Nineties Broadway flop. The creatives are all serious musical veterans but lyricist Richard Maltby and David Shire (a fabulous film score composer) don’t provide songs that illuminate John Weidman’s dull script. 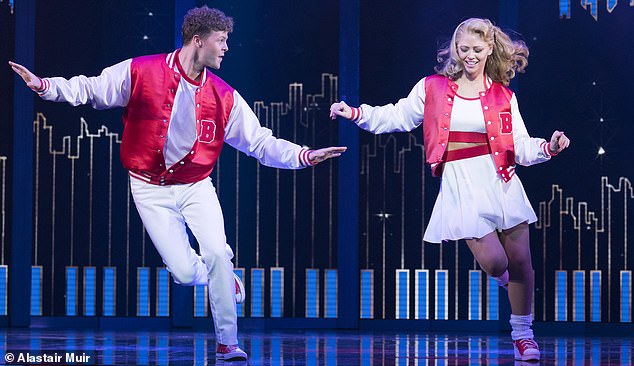 Tom Hanks made the film a big hit with his all-redeeming charm. While McGuiness and Walsh (above) are perfectly proficient, there’s little spark between them

Stage highlights include two clever illusions, and McGuiness and Kelly doing a sterling Fred-and-Ginger routine on a giant floor keyboard – one of the film’s treats. The choreography – by Morgan Young, who also directs – is lively but out of kilter with the Eighties wardrobe and look.

I suppose hardcore fans of the two leads may go home just about satisfied. For the rest, it’s a show that feels dated and desperate.

Richard Bean’s rewrite of Goldoni’s classic The Servant Of Two Masters has become a global hit. It rests hugely on the lead part of the servant Francis, in which James Corden triumphed eight years ago.

The talented David O’Reilly (from the sitcom Benidorm) here takes it on and makes it his own. He’s like an ad-libbing lovechild of Frankie Howerd and Peter Kay, dressed in a patter comic’s checked suit.

In an evening of carefully plotted chaos, George Kemp is Francis’s honking posh guvnor, Alice Frankham is the disguised other one, Roscoe. Meanwhile, local gangster Charlie (David Cardy) wants his daughter married to Roscoe, while she prefers a self-dramatising thespian (Jack Brett). 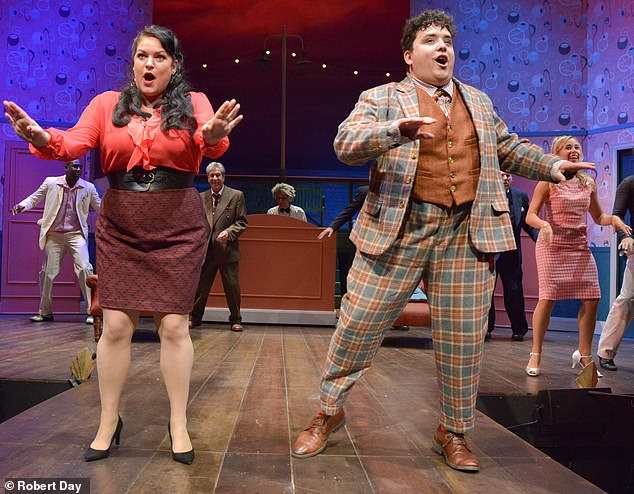 One Man, Two Guvnors rests hugely on the lead part of the servant Francis. The talented David O’Reilly (above with Rosie Strobel) here takes it on and makes it his own

As waiter Alfie, TJ Holmes should hold a record for the most pratfalls while serving soup.

It’s slow to start and not all the performances are fully harmonised. But while the comic spirit of Sarah Brigham’s production – on a Sixties set and with tasty skiffle band interludes – is relaxed, the slapstick is military in its precision.

If you are in search of mentally untaxing old-fashioned hilarity, this is the show for you.

Could this be any more pointless? Yes, Friends the sitcom is still very popular, so there is a market for a parody musical of it. But Friendsical isn’t really that – it’s more a witless rip-off.

Miranda Larson’s unfunny script and lyrics have no take on the Friends phenomenon. There are occasional knowing asides, but mostly the show just repeats famous lines and rehashes famous moments.

There are ripples of recognition in the audience at Ross’s leather trousers, Joey’s man bag, the girls all getting into wedding dresses. But such pleasures are surely better delivered by watching repeats. 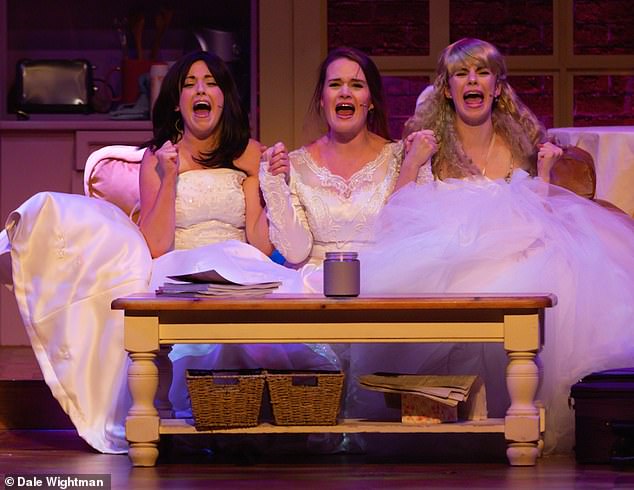 Sarah Goggin (left) looks and sounds like Monica, and Ally Retberg (right with Elisabeth Yorke in the middle) captures Phoebe’s tics. But it’s not enough to save this turkey

As a musical, this has little to recommend it. The dancing is perfunctory, and the forgettable songs have limp lyrics. ‘On again, off again, woo woo woo’ is not exactly biting satire.

The cast give it their all, and there are some accurate impressions. Sarah Goggin looks and sounds like Monica, and Ally Retberg captures Phoebe’s tics. But it’s not enough to save this turkey.