Footage has emerged of the moment a terrifying stunt at the Sydney Royal Easter Show went horribly wrong in front of shocked spectators.

Three men were treated by paramedics after two motorbike riders collided while performing a high speed stunt in the Globe of Death on Tuesday night at Sydney Olympic Park.

Footage obtained by Newsflare shows a big crowd of spectators in awe at the popular attraction watching and filming the motorcyclists speeding around the sphere cage while a third man stands in the middle.

Everything appears to be going according to plan until towards the end of the stunt when one of the motorcyclists clips the man in the middle.

It causes the motorbike riders to crash into each another, sparking horrified gasps from the shocked crowd, including young children.

Several onlookers are seen rushing toward the sphere to help the men inside.

‘Ambulance officers arrived and checked over the three men who appeared shaken but uninjured. The motorbikes didn’t fear as well, they were both badly damaged,’ the witness who filmed the footage told Newsflare. 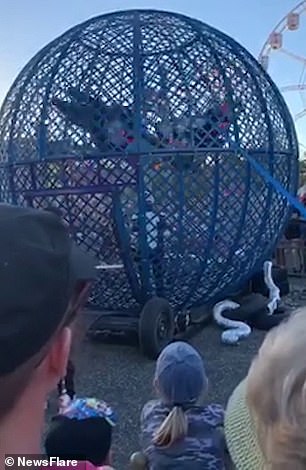 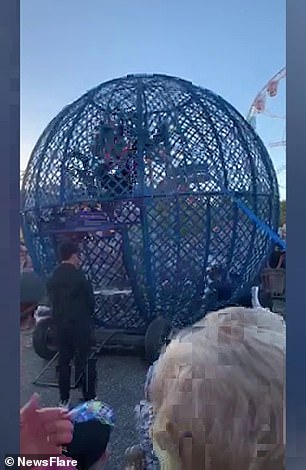 He added that the Glove of Death will be back in action on Wednesday night as planned.

The biggest annual ticketed event in the southern hemisphere, the Sydney Royal Easter Show began last Friday and continues every day until April 23.

First held in 1823, this year marks the 21st anniversary since the show relocated to Sydney Olympic Park.

The latest incident comes after a toddler was thrown from camel at the separate Sydney Family Easter Show in Moore Park on Tuesday.

The boy’s mother was injured in the incident.