Nine dogs are saved from Cambodian Deliver-rover: Meat trader who rides around with pooches and cooking pots on his bike releases animals after Good Samaritan pays $350 for them

This is the heartwarming moment a dog lover pays $350 (£281) to free nine dogs that were destined for the dinner table.

Sam Phannarith was driving when he spotted the dogs crammed inside a rusty cage on the back of a motorcycle in Siem Reap province, Cambodia, last Wednesday.

Footage shows Mr Phannarith approaching the man as he is getting off his motorbike before he hands him the money and the seller opens the cage to let the dogs escape. 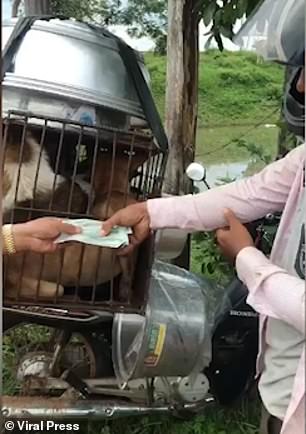 Dogs which are set to be sold, butchered and eaten are crammed into a cage on the back of a meat trader’s motorbike  in Siem Reap province, Cambodia. But they are rescued by a kindhearted man who hands over $350 to the trader

The meat trader had been set to  sell the dogs in nearby villages.

They would have been butchered and eaten by hungry locals.

The trader even had metal pots stacked on his bike for cooking them.

Mr Phannarith negotiated a price of $350 dollars – the country uses the American currency alongside its less desirable Riel – and the trader agreed to release them.

After the cage has been opened, the video shows the dogs briefly staying put before they awkwardly scramble out one after the other.

Mr Phannarith said: ‘I could not stand the idea that the dogs would be human food soon, so I bought them for $350 and I am happy.

‘This was money well spent. It was about 40 dollars to give them their life and freedom.

‘I hope that other people will see what I did and think more carefully about stopping eating dogs in the future. 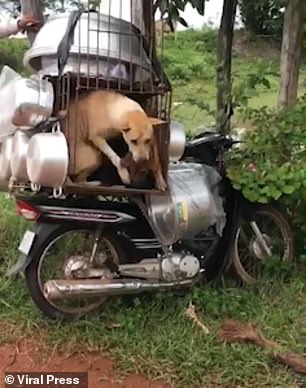 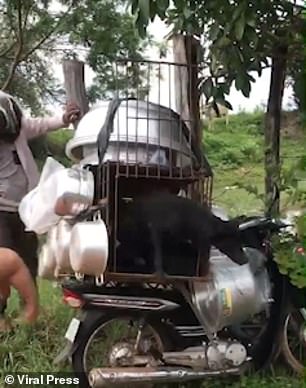 ‘I would do the same thing again. If I saw more dogs being taken for food I would pay to have them released.’

Dogs are a popular dish in the rural parts of northern Thailand, Vietnam, Cambodia, South Korea and some areas of of China.

In Vietnam alone, 30 million dogs are killed each year for human consumption.

Locals enjoy eating the meat and sometimes they believe that it can be a remedy for illnesses.

The demand for dog meat has lead to vast breeding farms and often sees pets and strays stolen.

In the UK earlier this month, a legal ban on eating dogs was blocked by the Justice Ministry bureaucrats for fear of offending cultural sensitivities in the Far East.

Conservative MP Giles Watling was told by the Ministry of Justice that one of the reasons it acted was that it would be ‘culturally insensitive’ to tell other nations what they should eat.