Brothers For Life founder Bassam Hamzy’s brother is the ‘next’ to be targeted in an underworld war according to a secret police intelligence document handed to a judge.

But the marked man, who goes by the name Ghassan Amoun, brushed off NSW Police fears he was ‘at risk’ and attended his executed cousin Bilal Hamze’s funeral with grieving family members on Wednesday.

Hamze, 34, was shot dead six days ago after a date with a woman at trendy Japanese restaurant Kid Kyoto on Bridge Street, near Circular Quay, about 10.30pm.

More than a hundred mourners including Amoun and Bilal’s brother Ibrahem Hamze gathered to wash the crime boss’s bullet-riddled body, pray for it at Lakemba mosque and bury it under a mound of soil at Rookwood.

At one point Ibrahem knelt by his brother’s grave. Just 24 hours earlier, he and Amoun had secretly fought police at the NSW Supreme Court court for the very right to be at the funeral.

Daily Mail Australia can now reveal details of an extraordinary police warning disclosed at the hearing.

On Tuesday, a lawyer for Police Commissioner Mick Fuller told Justice David Davies officers feared Amoun could be ‘at risk’ if he attended the funeral service with his grieving family.

Police intelligence obtained that morning ‘suggests that (Amoun) is said to be the next person to be targeted,’ Justice Davies told the court.

About a hundred men gathered at Rookwood necropolis to bury Bilal Hamze, 34, who was shot dead last Thursday evening in the Sydney CBD after dining at a trendy Japanese eatery 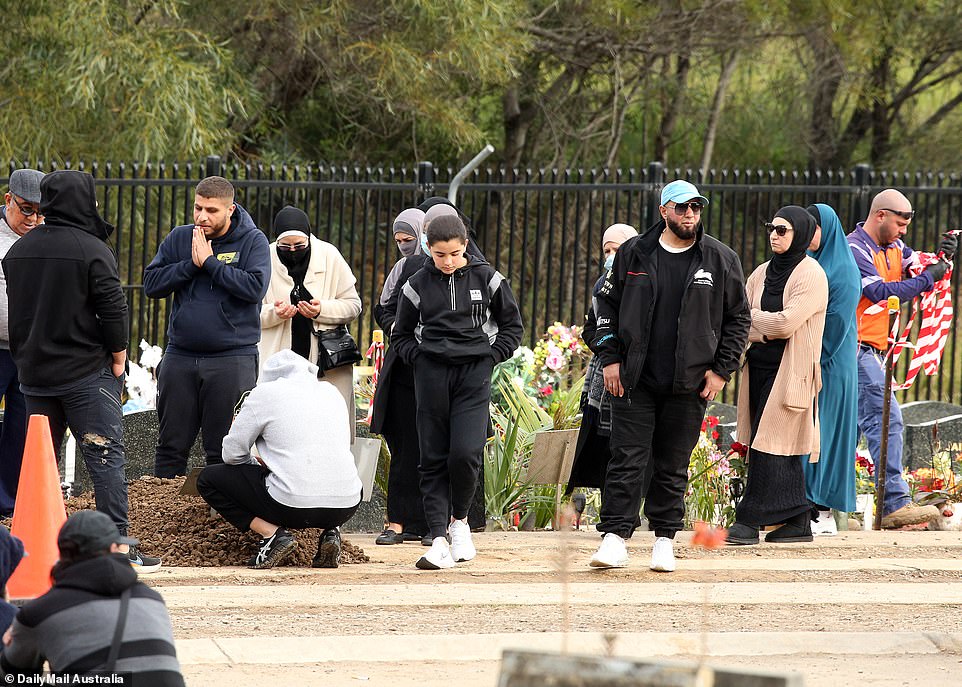 Bilal Hamze’s brother Ibrahem crouched by his brother’s grave. He was one of two relatives who successfully fought a secret court battle to have strict court orders curtailing their freedoms relaxed, so they could attend the service 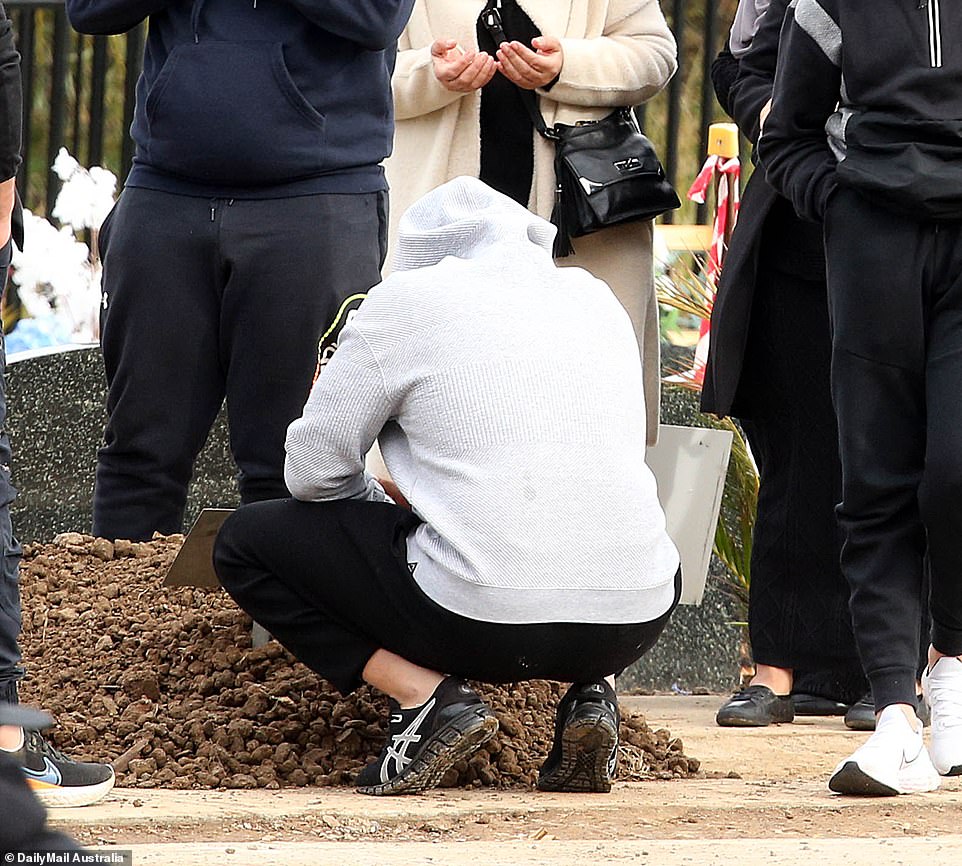 Hamze sinks to the ground by his sibling’s grave 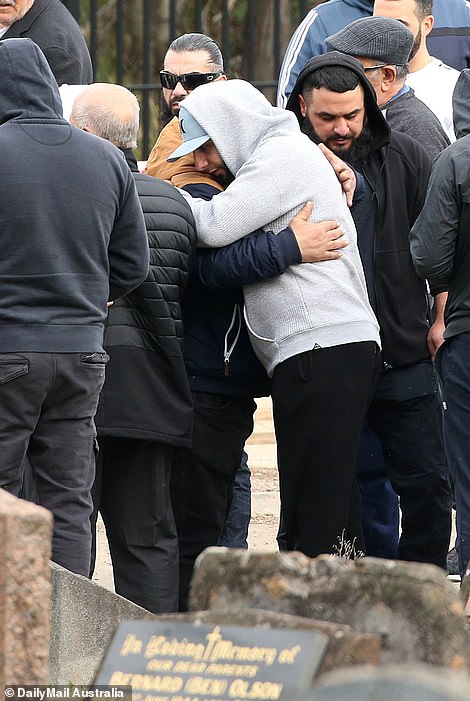 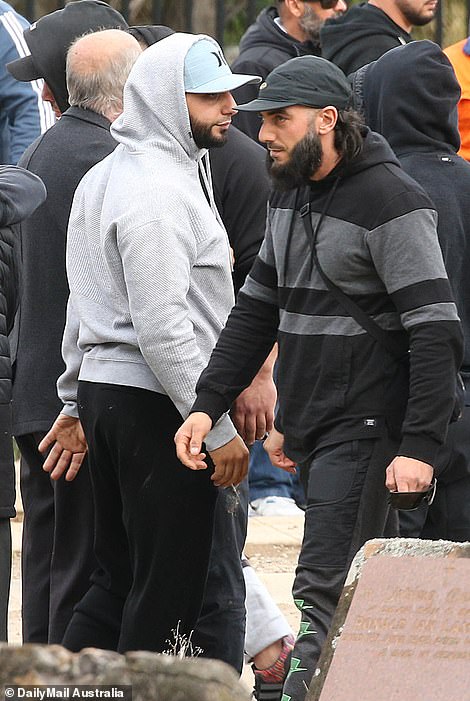 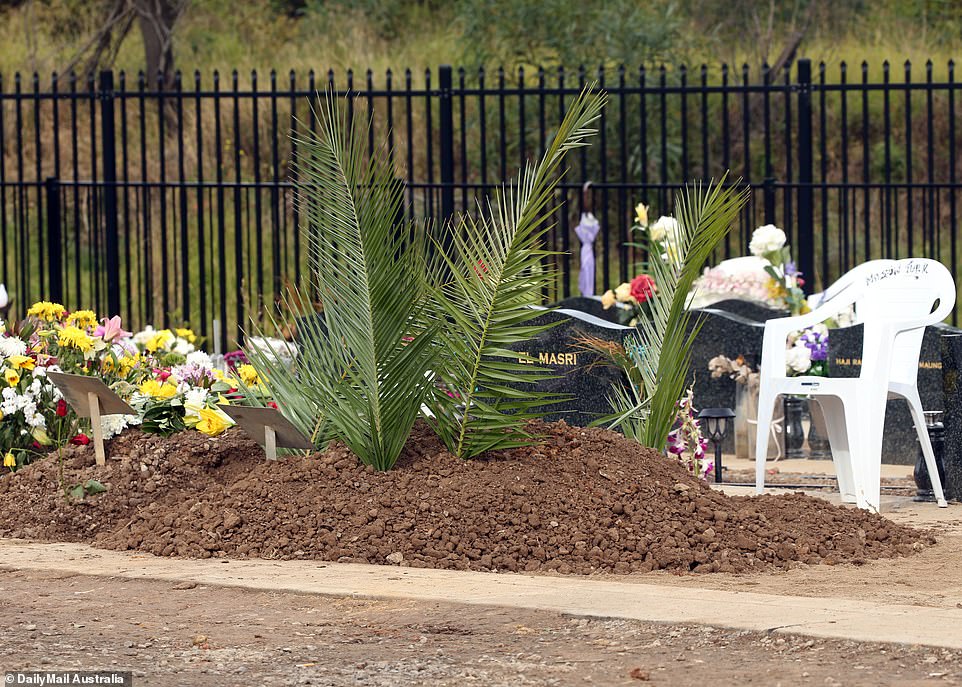 As is customary, Bilal Hamze’s body was buried under a mound of soil and palm fronds placed in the ground 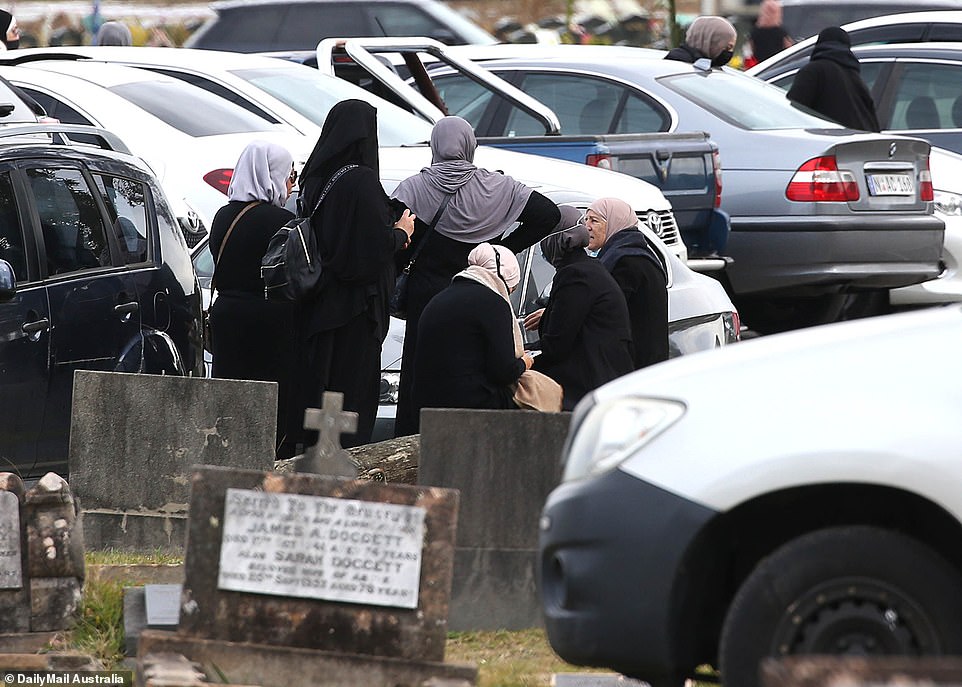 A group of women, believed to include Bilal Hamze’s mother Maha, sat off to one side while men attended to the burial 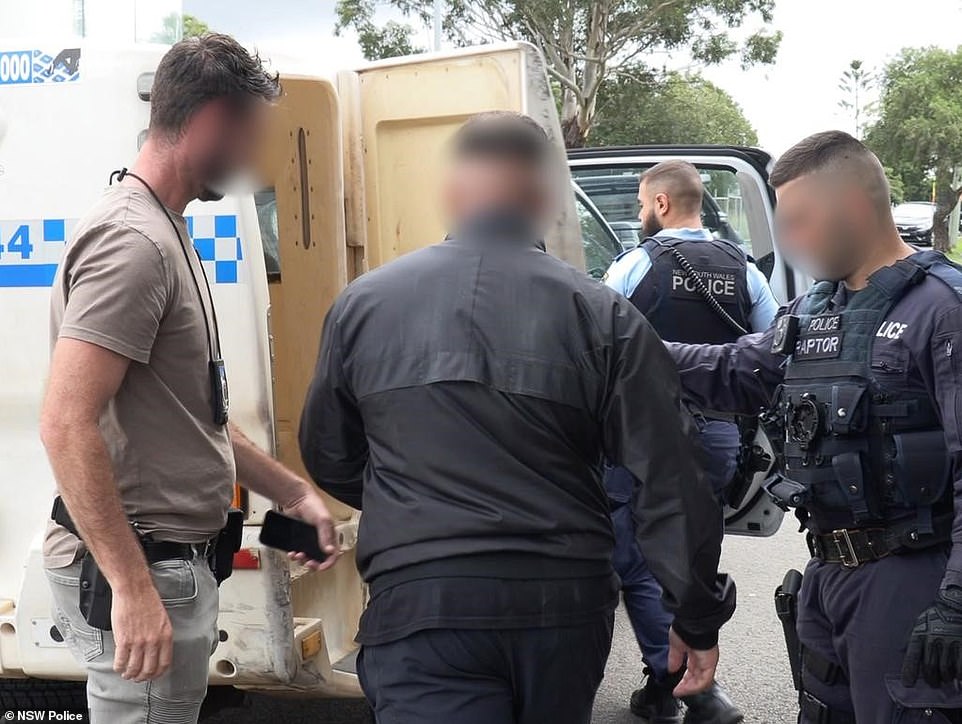 Ghassan Hamze (pictured above) is a marked man, according to details of a police intelligence read in the NSW Supreme Court on Tuesday. The intelligence findings were kept secret until after the funeral on Wednesday 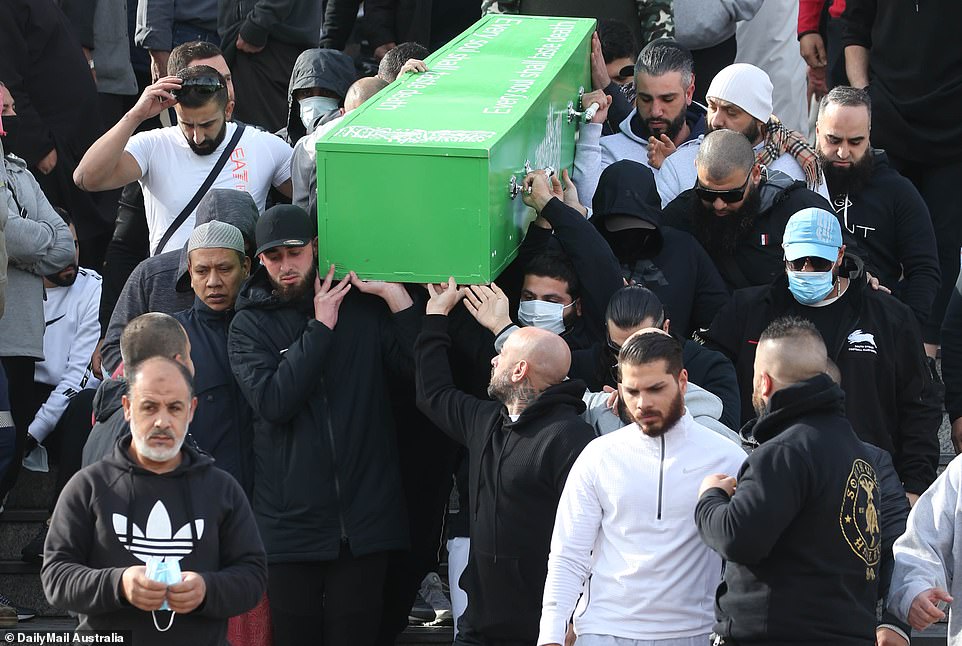 Family members, many of them masked, are seen carry the coffin of slain gangster Bilal Hamze following his funeral prayer service at Lakemba mosque on Wednesday

However, despite police fears, Amoun attended today’s service with family – but was believed to have kept his face hidden behind a mask.

The service was closely monitored by uniformed and plain-clothed police, including the gang-busting Raptor Squad.

Amoun and Bilal’s brother Ibrahem Hamze had gone to court to relax orders banning them from associating with two cousins, Haissam and Tareek, for the duration of the funeral.

The effort was furiously opposed by NSW Police, with barrister Christine Melis pointing to police intelligence reports that Amoun could be ‘at risk’.

‘Police received late this morning intelligence that suggests that there is a level of threat against Mr Amoun,’ Ms Melis told Judge Davies.

Ms Melis said officers had warned Amoun the threat could be ‘real’ and his movements at the funeral may be monitored by ‘people who are a threat to him’.

However, Ertunc Ozen SC for Amoun argued the funeral would be the subject of a heavy police and media presence.

‘It would seem to me the safest place for Mr Amoun to be is, in fact, if this intelligence is correct, at the funeral,’ Mr Ozen said.

Ms Melis argued that allowing Amoun to speak with family at the funeral could give him and his associates the opportunity to plot a retaliatory attack.

But Mr Ozen said it was ‘abhorrent’ to suggest his client would use the opportunity to plot a criminal conspiracy.

The judge eventually varied the orders so Amoun and Ibrahem Hamze could associate with their relatives at the service.

But Judge Davies suppressed the hearing until 4pm on Wednesday out of concern for Amoun’s safety. 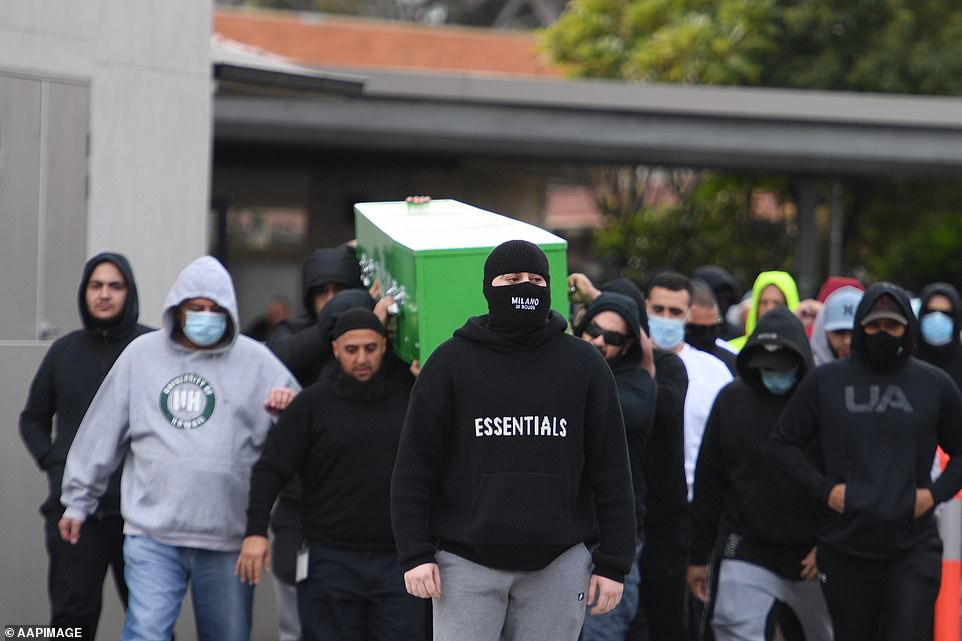 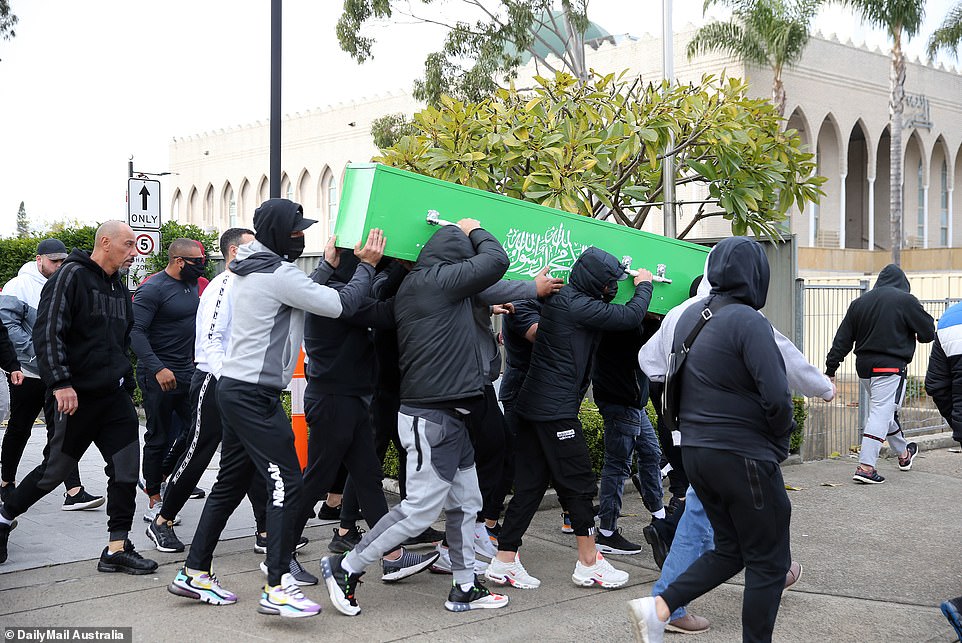 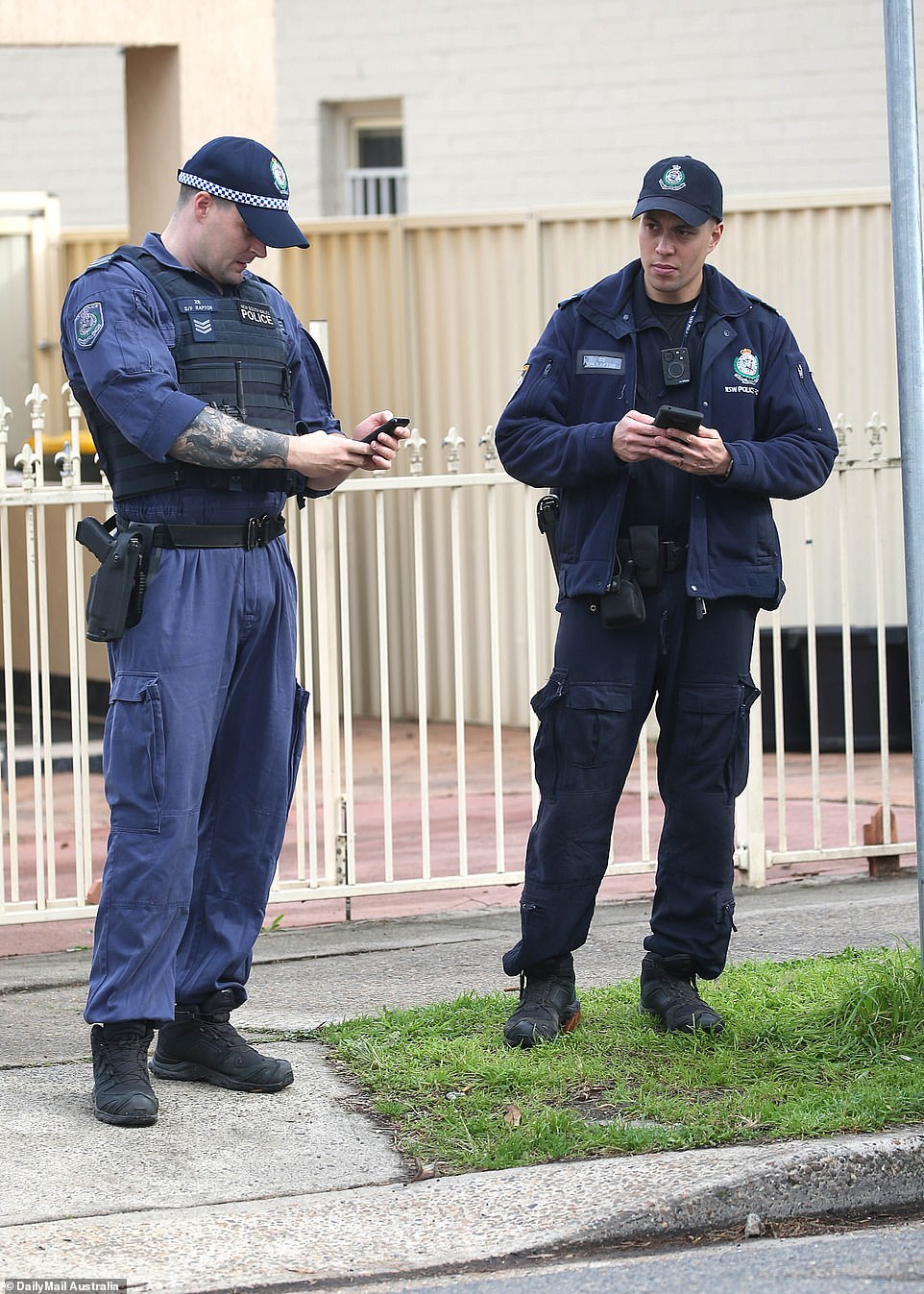 The funeral service was closely monitored by uniformed and unmarked police officers, including this Raptor Squad enforcer (left) 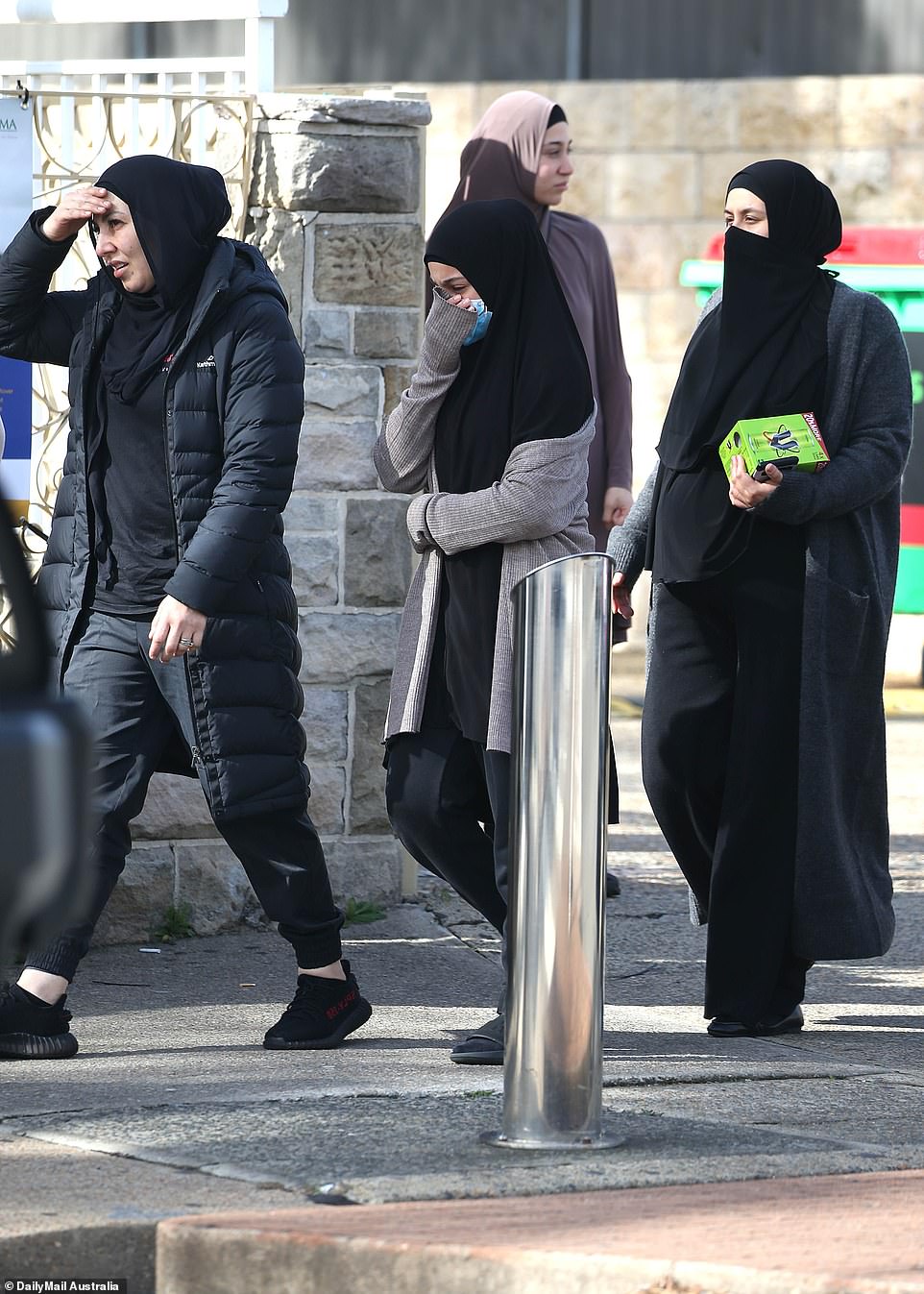 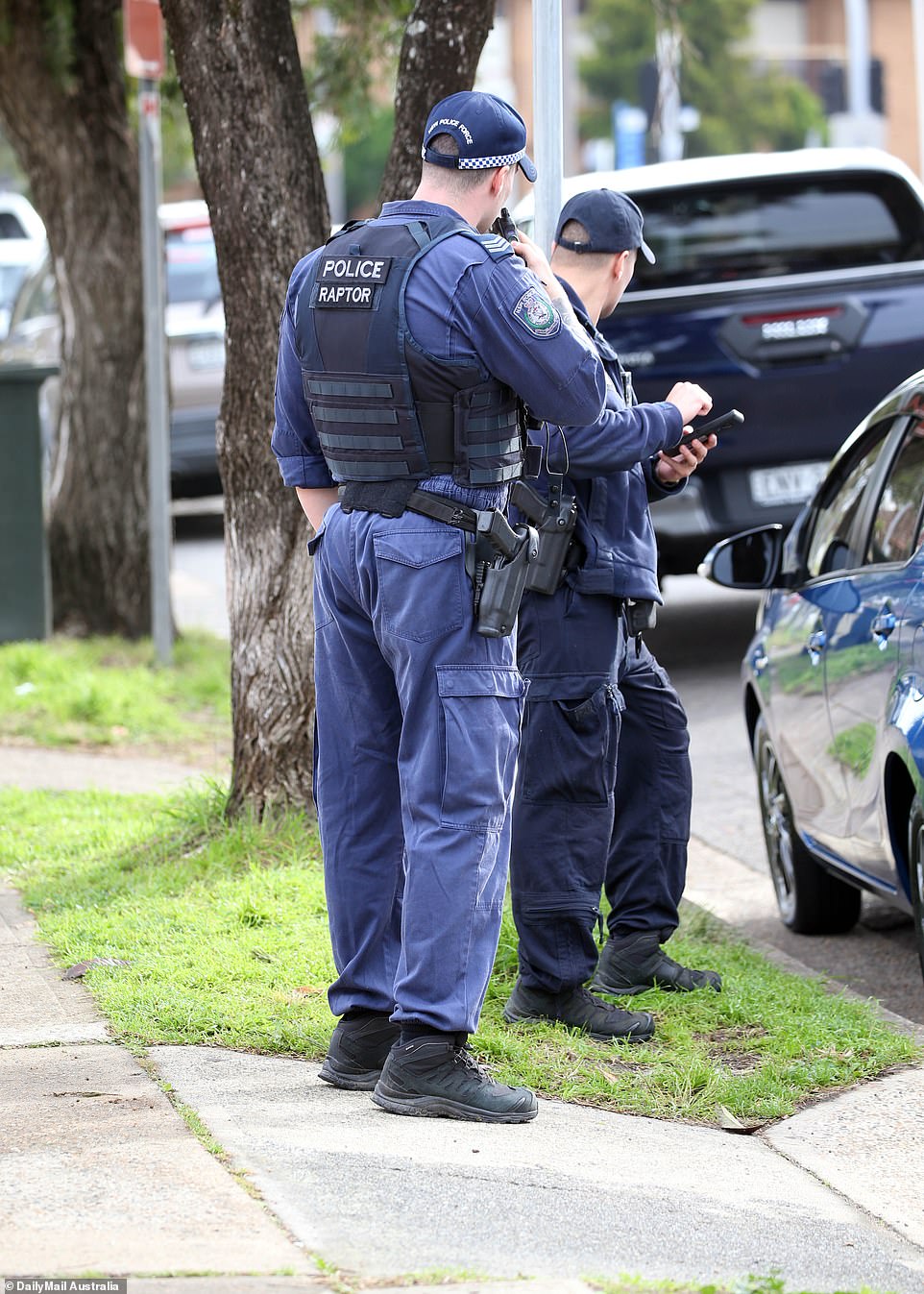 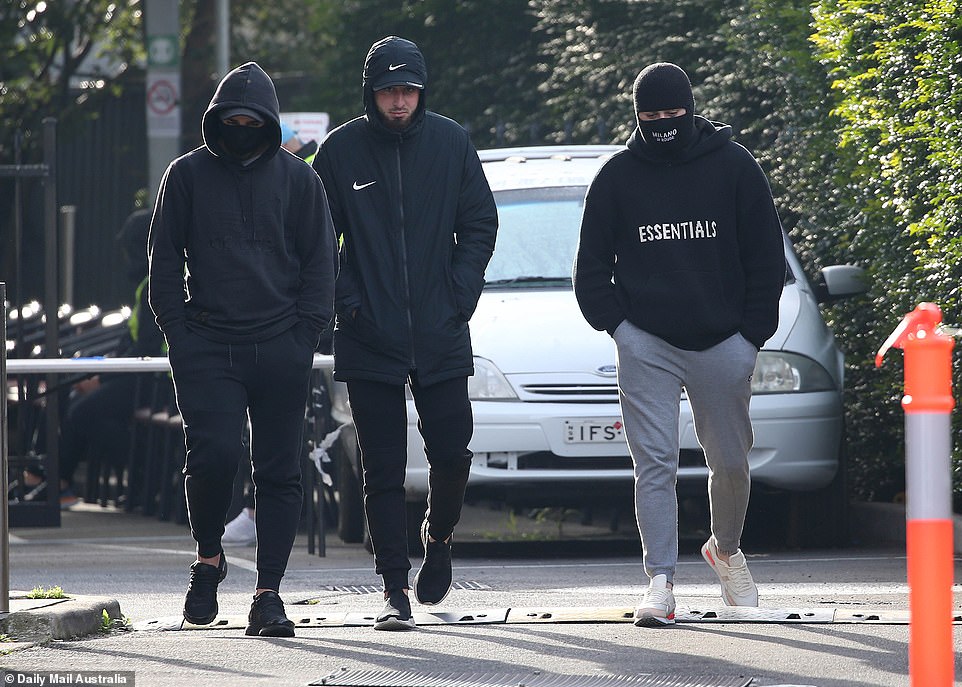 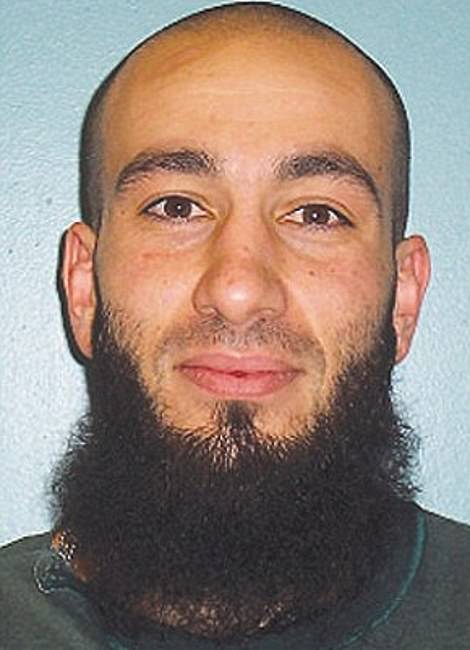 He has previously served jail time for assaulting a police officer and drug supply.

He has disavowed Brothers 4 Life – the notorious street gang founded by his cousin Bassam Hamzy while behind bars.

The judge repeatedly asked the parties if Bassam Hamzy would be attending the service, and was assured that he would remain at Goulburn Supermax.

Ahead of Wednesday’s service, Bilal Hamze’s body was washed in private and by relatives only.

In a social media post, the family said it was of ‘extreme importance’ that no mourners attended the body washing, an Islamic funeral tradition, aside from relatives.

Ahmed Elomar, the brother of notorious ISIS terrorist Mohammed Elomar, was spotted attending the washing of the body.

Dozens of male mourners carried the crime boss’s green coffin emblazoned with Arabic writing into the mosque just after 11am.

Women were ushered to a separate area of the mosque.

Following prayers, the casket was placed in the back of a waiting hearse and taken to Rookwood cemetery, where men buried it under soil and women rested palm fronds on top.

Ibrahem Hamze hugged friends and family members and knelt by his brother’s grave. At one point, members of the Hamze clan were also seen inspecting the gravesite of another relative suspected of losing his life in the gang war with the rival Alameddine clan – that of Bassam Hamzy’s other brother, Mejid. 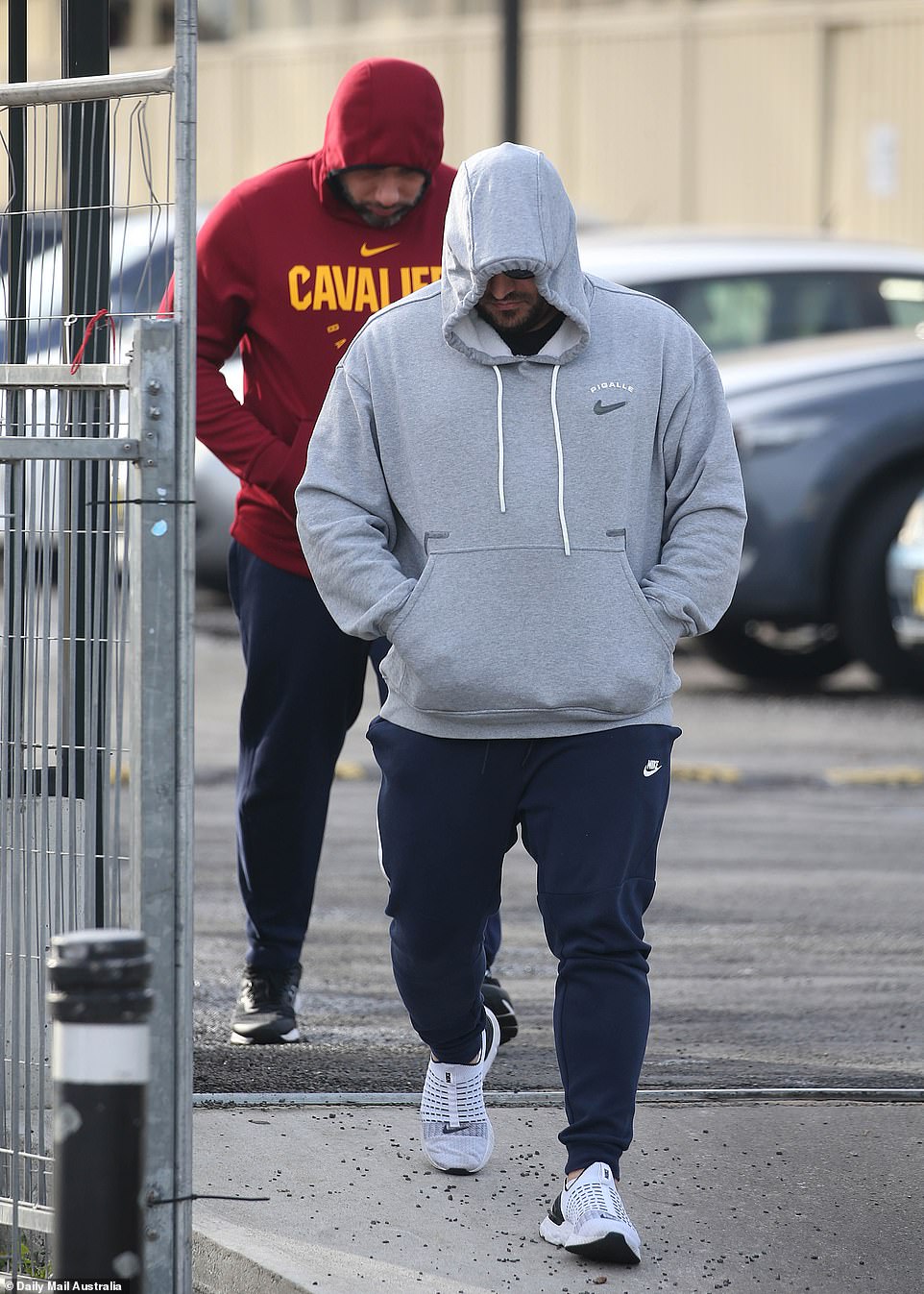 Hamze was shot dead in Sydney’s CBD on Thursday night after dining at a Japanese restaurant. Friends gathered on Wednesday to pay respects for the cousin of Brothers For Life founder Bassam Hamzy 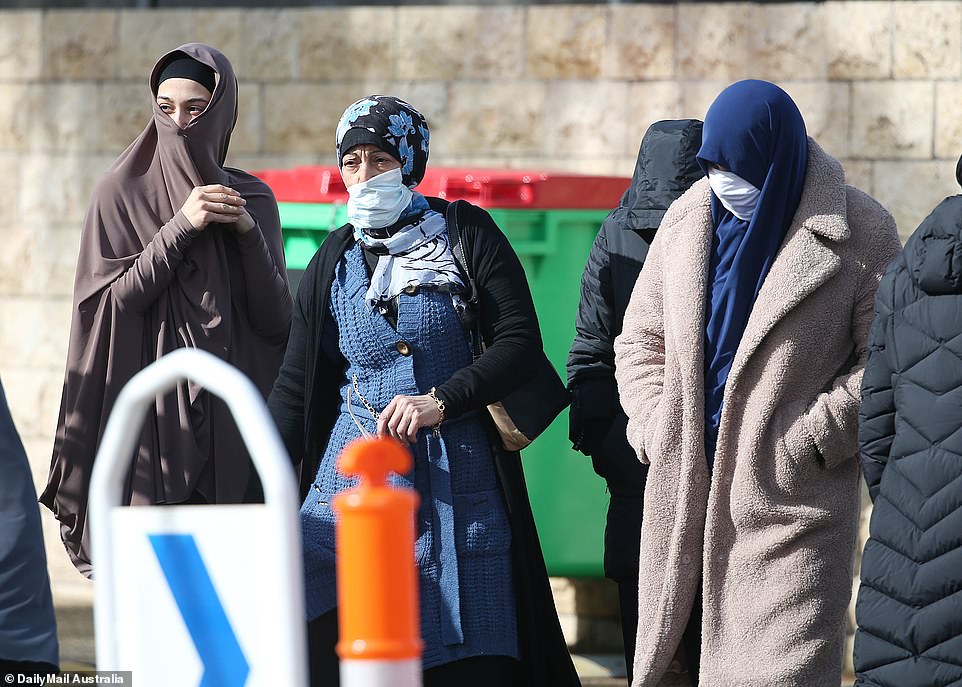 Among the mourners was Hamze’s mother Maha who was shot herself up to eight times in a drive-by shooting at her Auburn home in 2020. Pictured are mourners arriving at the mosque