Bill and Hillary Clinton have made a rare join appearance in public, attending the funeral of Congresswoman Louise Slaughter.

Hillary Clinton eulogized her fellow Democrat at the service in Rochester, New York on Friday commemorating Slaughter, who died at 88 last week as the oldest serving member of Congress.

‘Even her opponents couldn’t help liking her and respecting her,’ Hillary Clinton said.

‘Louise never forgot she stood on the shoulders of brave trailblazers and history makers. She picked up their torch. She carried it proudly throughout her career,’ Hillary Clinton said. 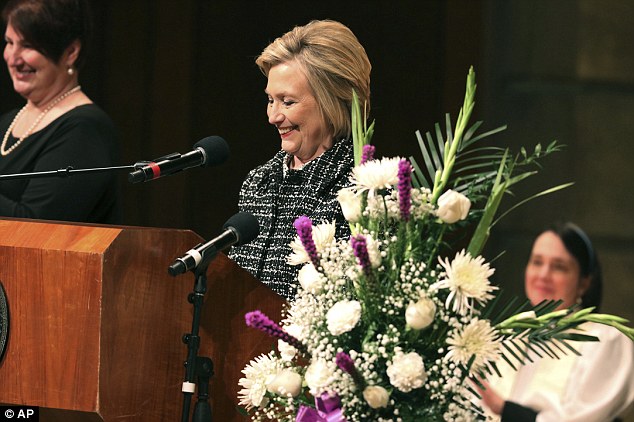 Clinton tells a funny memory of how after New York Congresswoman Louise Slaughter broke her leg, she told Clinton she had a new slogan: ‘vote for Louise, she has a leg up’

Slaughter, a Kentucky coal miner’s daughter who never lost her lilting Southern accent, died March 16 following a fall in her Washington home. She was 88 and had represented her district for 31 years.

Clinton said Slaughter took her under her wing when the former first lady was elected to represent New York in the Senate in 2000.

Slaughter had done the same for many other women in Washington DC, said Clinton. It is believed to be the first time since Clinton and her husband have been photographed together in public since a January 26 awards show in New York City.

US Rep. John Lewis, of Alabama, recalled meeting Slaughter during their freshmen orientation after being elected to the U.S. House the same year. Slaughter, he said, later invited him to Rochester, where she introduced him to two nuns who had taken care of injured civil rights protesters in Selma, Alabama, in 1965.

‘They cried. They hugged me. I cried, and Louise cried,’ the civil rights icon said. ‘That moment demonstrated to me the true nature of Louise. She was a beautiful, unbelievably gifted, loving sister.’

With a degree in microbiology, Slaughter championed a 2008 law intended to protect people with genetic predispositions to health conditions from facing discrimination from their employers or health insurance companies. 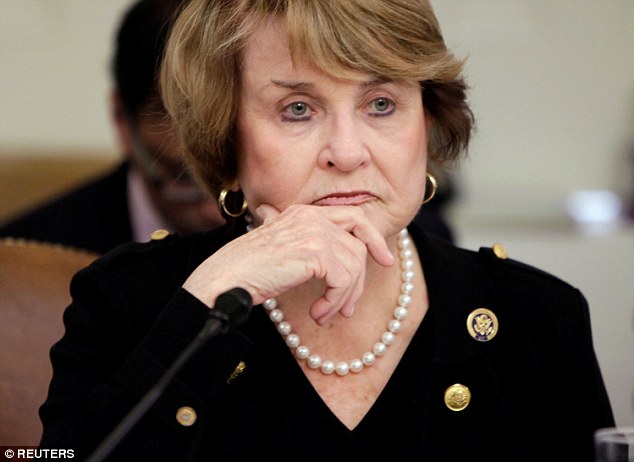 Slaughter, a Kentucky coal miner’s daughter who never lost her lilting Southern accent, died March 16 following a fall in her Washington home. She is pictured in a 2010 committee meeting 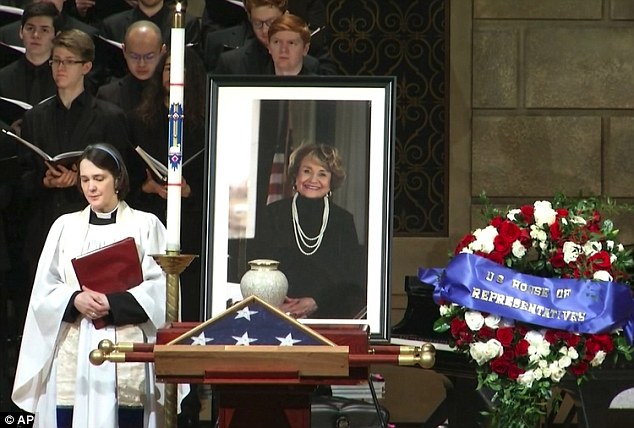 A photo of US Rep. Louise Slaughter is displayed at her funeral on Friday in upstate New York 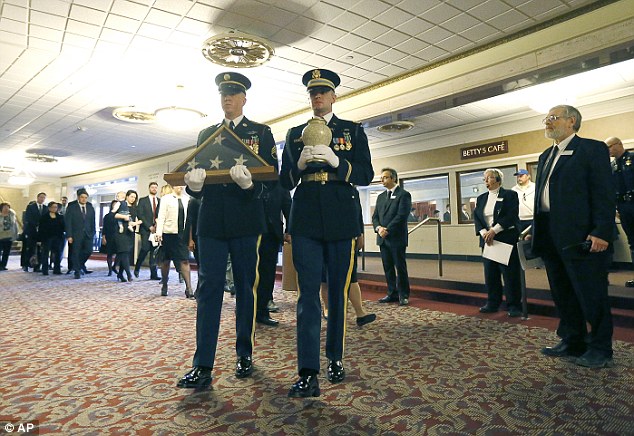 The Honor Guard carries the ashes of Congresswoman Louise Slaughter followed by family members in the Kodak Hall at the Eastman Theatre in in Rochester, New York on Friday

She also helped write the Violence Against Women Act and was the chief force behind a 2012 law to ban insider stock trading based on congressional knowledge.

Slaughter was the first woman to chair the powerful House Rules Committee, leading it from 2007 through 2010, and was her party’s top member on the panel when she died.

House Democratic Leader Nancy Pelosi called Slaughter, ‘a perfect balance of grit and grace’ with whom there was little point in arguing.

‘Louise shortened always the time and distance between what was inevitable to her and inconceivable to others,’ Pelosi said.

Slaughter was born Dorothy Louise McIntosh on August 14, 1929, in Appalachian coal country. She married Ohio native Robert ‘Bob’ Slaughter in 1957 and moved to the Rochester area for her husband’s job. Bob Slaughter died in 2014 at age 82. The Slaughters are survived by three daughters, seven grandchildren, and one great-grandchild.

Cuomo will set the date for a special election to fill the remainder of Slaughter’s term, which expires December 31.