Bill Bailey… embarking on a new UK tour, the reigning Strictly champ invites you into his world

Bill Bailey, comedian, actor, musician and Strictly winner, is posing for photos in his back garden. He may live in busy west London, but he’s installed an Eastern garden, complete with a Chinese-style arch leading to his work studio. There are exotic birds in an aviary to the side.

He disappears off to another section – a mini zoo, effectively – and comes back with a duck. ‘Meet Mr Duck,’ he says. Like the man himself, you never quite know what’s around the corner.

Bill’s actually a bona fide zookeeper, being registered with zoos up and down the country to foster birds (or any animals really) in need. If you have an emergency parakeet situation, Bill Bailey is your man.

He’s also a born entertainer, good if you need to be cheered up. An afternoon at his is quite the tonic.

As Billy Bailey prepares to embark on new tour En Route To Normal, he reflects on how he won last year’s Strictly. Pictured: Bill at home in London, with Mr Duck

He’s stepped onto an ornamental stone and balances on one leg for the photographer. He balances. And balances.

The pictures stop and he’s still standing there, in limbo. He looks like he could stand there, on one leg, until Christmas and his wife could drape fairylights on him. These are quite extraordinary skills for a 56-year-old man, no?

He says that when he signed up for last year’s Strictly, he had to do a balance test. Comments were made about how good his was, and this was before he started dancing.

‘It must be the paddle-boarding,’ he says. ‘You learn to stay upright.’

We should have learned our lesson not to be surprised at anything Bill Bailey does. This time last year our jaws dropped as he emerged, nimble-of-foot, as a serious contender on Strictly with partner Oti Mabuse.

He’d started off in the competition (in our heads anyway) as the novelty act. We thought he’d make us laugh, but not much else.

Then he wowed – and won! Never again will we dismiss the ones who aren’t leggy and lovely or Olympic athletes. Funnily enough, there hasn’t been a let’s-laugh-at-them contestant on Strictly this year.

Bill and Oti performed at this year’s opening show (‘I hadn’t forgotten the steps. Once you’ve learned a piece, it’s there, in the bones’) and got a chance to see the new crop up close. 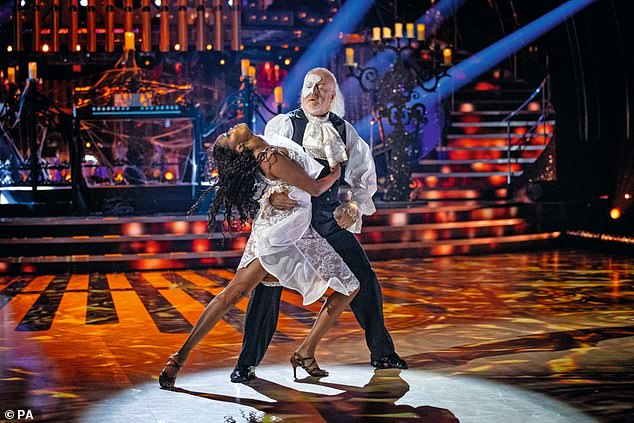 Bill claims that he felt like he owed it to Oti to really work hard while he was on Strictly.  Pictured: Dancing on Strictly last year with pro partner Oti Mabuse

His favourites have been John and Johannes, and AJ Odudu. But what he really loves is that all the contestants have been taking it seriously. No one seems to regard themselves as a novelty act, which he reckons is quite a departure.

‘Before, I think you had people who’d be seen as, “Oh well, they’ll be useless for a week or two and are just there for comedy value”. I don’t think that will happen again.

‘It’s not necessarily down to me, maybe it was heading that way anyway, but people now take it seriously, which is wonderful because it deserves to be taken seriously.’

For a man who can have you laughing out loud, he can also be quite earnest. He says that he felt he owed it to Oti to really work hard while he was on the show. He hurled himself not only into learning the routines, but did his homework, too.

I have more spring in my step after Strictly

He was a star pupil, taking it on himself to research each dance and its origins, its meaning. It’s just how he is, I think, endlessly fascinated by everything, from frogs to foxtrots.

Mind you, even those close to him thought he might end up in an inelegant heap. His father, 89, a retired GP who lives in Devon, expected the worst.

‘He thought I’d be like John Sergeant,’ says Bill, referring to the former BBC political giant who was described by one commentator as like a ‘dancing pig in Cuban heels’. 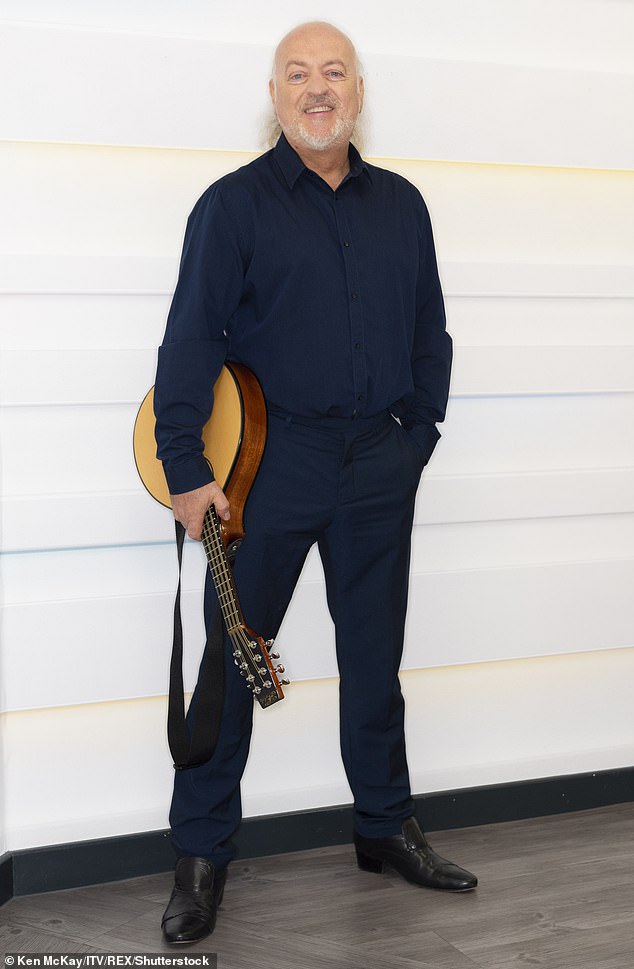 ‘He expected a slightly embarrassing older bloke being shuffled round the dancefloor, looking benignly befuddled, but after the first dance he said, “I can’t believe it, but you were actually quite good.” Cheers, Dad! Halfway through the series he said, “You seem to be getting the knack of this.” And at the end he was on his feet cheering.’

He’s elated at the memory, but also sad. In a normal year, his father would have been in the audience at Strictly, being treated like a star himself. Because of the pandemic, however, he was at home alone, cheering into the void.

Bill curses Covid for that. ‘It robbed us of moments like this, where we’re supposed to be together.’ 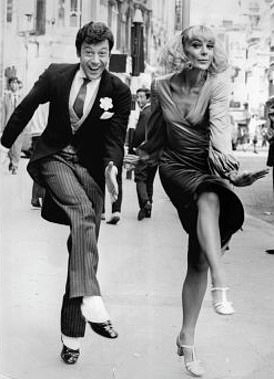 The late Lionel Blair in 1968, with actress Aimi MacDonald

One man who taught Bill a bit about dance many moons before Strictly was the late Lionel Blair. Bill once, he tells me, took part in a limbo dancing contest with Lionel, who died earlier this month aged 92, and Sinitta.

So far so surreal. Bill came second, beaten only by Lionel’s limbo. ‘I was younger, so a bit more bendy, but Lionel was properly limber, from all those years of tap dancing I imagine.’

He learned lots from Lionel – about dance, about showbiz determination – and says he was a ‘charming and generous gent, a wonderful dancer and brilliant company on the other times our paths crossed’.

He’d have loved to have done a travel documentary with him, he says, ‘perhaps exploring the great Canadian lakes in a kayak’. Alas, time has run out for that one.

He couldn’t even see his dad for the family Christmas they had planned because of that last-minute lockdown, which was another loss. Bill lives with his wife Kristin and their teenage son, Dax.

He and Kristin met in 1987 when he was performing in Edinburgh and wooed each other via hand-written letters before marrying in Indonesia the following year. He has a box of letters his grandmother and mother Madryn, a nurse who died in 2005, used to write to him; his mum sounds like a demon letter-writer.

‘She’d tell me what was happening in the wider family, then say, “I must go and make your father a chicken casserole.” Then she’d pick up again, and write out the recipe.’

Bill always had pet dogs as a child, and was an avid birdwatcher, but he’s effectively been moonlighting as Dr Dolittle all his adult life, his expertise gained from an encylopaedic collection of natural history books. His zookeeping started with a clutch of rescue dogs and rabbits, and the odd ‘manky bird’.

When friends heard of an animal in need, they’d ring him. He’s been involved with myriad animal rescue charities, once breaking off from a comedy tour to campaign on behalf of dancing bears in India.

He once found a gun to his head when trying to rescue a goose outside Buckingham Palace. It turns out Special Branch were also lurking in the bushes, hardly surprising given the location – and the fact it was 2am.

His neighbours do consider him a bit eccentric, he admits, but they’ve become used to his menagerie. And it’s a long time since anyone baulked at the sight of him walking his white cockatoos in the local park, one on a pink lead, one on a green one.

We are meeting because Bill is, finally, back at the day job. He’ll be off on tour again soon, his first major comedy undertaking since things started opening up again.

Touring has been his bread-and-butter since he started on the comedy circuit in the early 80s. This show, called En Route To Normal, will be – in true Bill Bailey style – comedy with extras.

A talented musician, his funny stuff has often included a musical element. He learned piano as a child, and went all the way up to diploma level with his exam grades.

He could have gone to university to study music but by then had become fascinated with ‘words and the way we use them’. He also loved to make people laugh. ‘I think I was lucky to appreciate that; had I gone down the classical music route, it would not have been enough.’

His parents, more traditional in their outlook, had been fearful of a life in comedy. But by the time his mother died, she realised he was on a successful course in life. He credits her with his love of dance because she sent him to classes when he was in his teens.

‘I only had two lessons because it wasn’t cool for a teenage boy, but she’d have loved Strictly.’

Will there be dancing in his stage show this time? Of course, he says. ‘I did a cabaret-type show recently and it had some dancing. I’ve always done a bit of stumbling about, but it might have more finesse now.

People used to say that comedy was a niche thing

‘I have more spring in my step after Strictly. What’s been lovely too is hearing people my own age, and older, say they’ve taken up dancing because of me and they’re less self-conscious about it.’

What else has winning Strictly meant for him? He hasn’t dashed off to take a role in a West End musical but he welcomes the fact that more people may now flock to see him live, given the mainstream appeal of the show. He chats about how he and his comedy brethren have landed in the mainstream spotlight.

‘If you look at the TV schedules, it’s comic entertainers you see on Friday nights, Saturday nights. They’re on panel shows, quiz shows, presenting things. People used to say comedy was a niche thing. Now this is just not true.’

He’s long banged the drum for comedy to take a place at the entertainment top table. One of the few gigs he played in the pandemic was at Latitude, a music festival where he became the first comedian to perform on the main stage.

‘I always thought that comedy was never quite well served in these places. It ought to be on the main stage. It ought to be acknowledged,’ he says. Glastonbury next then? ‘Yes, that’s the goal.’